By Blood Betrayed (The Kingsblood Chronicles) 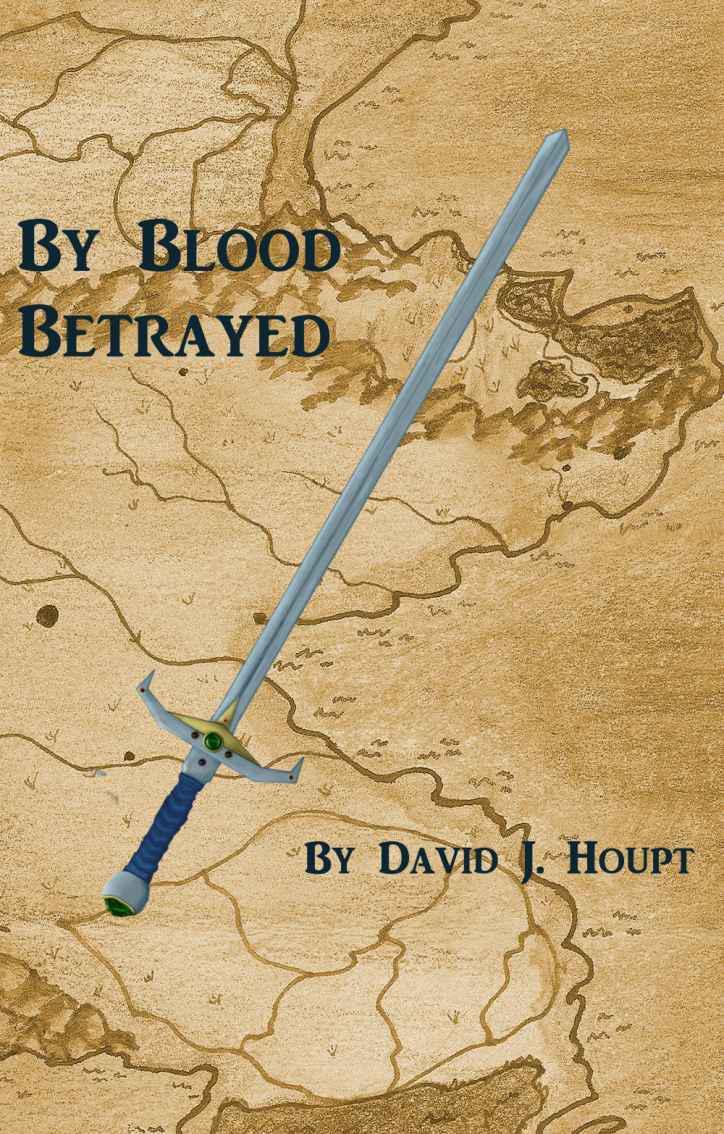 To Lorri, my wife, friend, helpmate, and editor extraordinaire, all my love.

I first envisioned Prince Lian as a supporting character in a short story. In “Zaria,” Lian is embroiled in a conflict with his uncle, the Usurper King Rishak and his wife the evil sorceress Queen Jisa. The titular character, Zaria, is a spellsinger of great power who is one of Lian’s allies in this war. Lian and his aunt and uncle weren’t the main characters in the story—that’s Zaria’s place—which I wrote with the intention of submission in the late Marion Zimmer Bradley’s
Sword and Sorceress
anthology.

I wrote three other short stories set in the same world, with the same song-based magical rules, and thus the world of Tieran was born. I began to wonder what kind of cosmology could create such a world of high magic, and what kind of crisis would give rise to Prince Lian’s desperate situation. By the time I’d written the opening chapters of
By Blood Betrayed
, I had developed Dunshor’s history and the development of the situation that led to both the terrible events shown in Zaria’s story as well as the ones contained in this book.

I submitted the book to a number of literary agents and publishing houses, and rejection letters were the only result. I set Lian and his world aside for years, figuring I’d try again when the market changed. I never envisioned the degree to which the bookselling market
could
change—electronic readers were the stuff of science fiction, and while I believed that someday they’d become common household items, I never really envisioned that they’d be quite as mainstream as they’ve become. Amazon’s Kindle™ and the other tools out there have revolutionized the industry and has given Lian a chance to share his story with the reader.

I hope you enjoy it as much as I enjoyed writing it.

Map of the Northern Continent of Shara

Tieran and Her Moons

Map of the Northern Continent of Shara 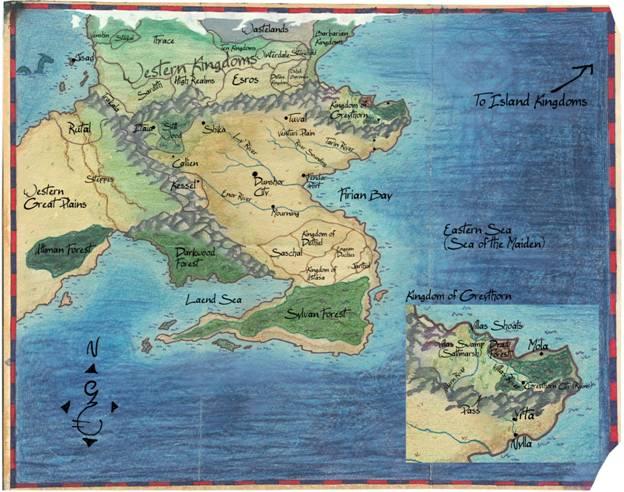 Tieran and Her Moons 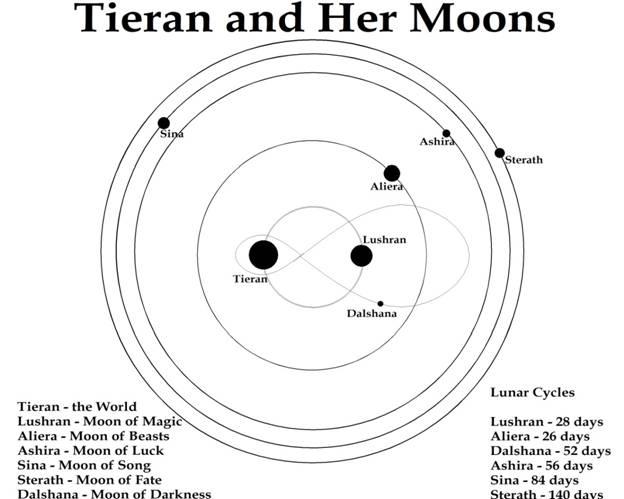 “Beware the hand closest to the heart.”

Glowering as he stood in deep thought, the man watched the mages at work. In the harsh azure glow cast by the many enchanted lights, the scars on his face were clearly visible. Something had burned a horrible wound on the right side of his face, which had never fully healed. If it bothered him that the lesser mages occasionally turned away in distaste at his appearance, he didn’t let it show. Instead, he observed the wizards singing their magic around him as if he could actually visualize the enchantments being woven in mid-air.

This man, however, possessed none of the magical talent characteristic of his lineage; his abilities lay in other arenas. Turning to the mistress of the circle of mages, he tenderly kissed her cheek. “It goes well?” he asked, slipping his arm around her lithe waist.

The woman smiled, leaning into his warmth. Her own part in this complex ritual was yet to come, as well as that of the other two Masters present. “It does, husband. The gate will open exactly as we discussed, and the castle wards will be thwarted. Your forces will enter the fortress unmolested and strike freely at the garrison.”

“The men I hired are already inside?” he confirmed, ensuring that nothing was amiss on this critical night. There wouldn’t be a better opportunity for a long time, and perhaps never would be, if any fraction of the strike were to fail.

“They are, cloaked by the enchantments they carry,” she said soothingly. Most of the men hired by the scarred man were not mages, so the powerful spells to confound and confuse the defensive spells of the castle had been provided in advance by the sorceress and her colleagues.

She continued, “Unless Bes’ hand is against us this night, Evan’s line is doomed.” She was eager to proceed, and he could feel the tension in her muscles.

“Opening a gate into the castle would never have been possible if I hadn’t discovered a weakness in their wards,” she said, continuing to placate her husband. “I am certain that they are unaware of it, and this attack will come as a complete surprise, especially given the quarter from which it comes. Dunshor City will be ours by morning, and your claim to the throne will be unchallenged.”

“It won’t be as easy as that, woman,” he said, growling at her attempt to calm him. He preferred to worry before an engagement. “The noble houses have to be neutralized or placated, and our borders will be weakened for a decade by this little coup. The peasants won’t approve of our actions, and we’ll have revolt after revolt to quell. No, this is just the beginning, and I don’t believe for a moment that we’ll succeed unchallenged.”

She smiled, “Just as you leave the magic to me, I leave the politics to you, husband. They are your strength, especially where our neighbors are concerned. The western kingdoms won’t dare strike against you, and the southern states and barbarian lands alike can be subdued if need be.

“Once the castle is ours, it will be a simple matter to consolidate our power,” she reassured him, slipping from his embrace to resume her position with the other Masters.

As she joined the song with her amazingly beautiful voice, the man stalked toward his waiting troop commanders. “Best get the men ready, gentlemen,” he ordered, donning his helmet. “All is proceeding according to plan.”

As he watched the gate they were summoning gain substance, he still wondered what would go wrong. A plan on such a grand scale could not avoid problems, and his only hope was that they weren’t substantial enough to overwhelm him, for all his careful scheming.

For a moment, as the troops began to file into the dank cavern they’d chosen for the ritual as quietly as possible, he wondered what the cost of this night’s work would be.

“The concept of the battle language is usually attributed to the elves. However, the earliest use of such a tongue is found among the kossir, who used it to good effect against their ancient underground enemies, the goblins.”

A sudden, complete silence provided the only warning the guardsmen received before the small glass globe shattered at their feet. Choking yellow vapors, a derivative of the
mikasha
plant, billowed up from the broken sphere and engulfed the pair. The two began to cough and gasp for breath that simply wouldn’t come. The first fell almost instantly, overcome by the noxious fumes. The other, hardier than his companion, turned to run from the mist, but a short dagger appeared in the center of his chest. In amazement, he looked first at the slim figure of the assassin who’d thrown it, and then down at the weapon as he joined his fellow on the flagstones of the palace floor.

A second assassin, with crossbow aimed to fire at the backs of the guardsmen, slipped around the corner. The pair of assassins smiled and nodded to one another. The gaseous poison quickly dissipated, perversely leaving behind a faint scent of lilacs, and except for the fallen guards, all appeared normal. The older of the two motioned that he would continue on to their target, and the younger assassin nodded. They had agreed earlier that either one of them was more than a match for their target, and that some preemptive looting was only their due.

It was strictly against their orders, it was true. It was also true that the one who’d given those orders would have them both flayed alive while regenerative magic was continuously applied to their tortured bodies.

But that would happen only if they were caught.

The elder assassin, clothed in a dark maroon cloak, was a member of the ancient Guild of Trakala. His black-robed companion was a freelancer from Jisad, one of the few cities lacking a formal Assassin’s Guild. Under normal circumstances, the two would likely have been at each other’s throats, for the rivalry between guild and non-guild professionals was often bloody and extreme. However, their employer had paid a tremendous amount to the guildmasters of the various cities, enough to ensure that old rivalries would be held in abeyance, at least temporarily. The penalty to the transgressing guild would be terrible, should some cutthroat take it upon himself to redress some ancient wrong.  The independent killers had no organization behind them, and they were even less likely to cause trouble with no one to protect them from their employer’s wrath.

“Not on my coin,” their employer had announced to all of them when they’d met, the first and only meeting between this band of assassins and the man who had hired them. Even the Trakalan had been impressed with the immense number of murderers and hit men assembled in the dank cave near their targets’ castle. There were enough men and women assembled, for their employer showed no bias toward sex or age or race, to eliminate an entire family line.

That’s the point of the exercise
, the older assassin thought grimly as he moved toward his target’s quarters. His movements made no sound, for he was surrounded by a field of silence, wrought by the mages at the beck and call of their master. That meant more money, and lots of it. Mages were more expensive to keep on retainer than any assassin—barring those who were also mages, of course. The Trakalan had a trace of the mageblood in him, but his throat had been slit at an early age, and while the cut hadn’t been lethal, it had forever ruined his voice.

His employer’s intelligence reported that his target would be alone in his room, likely studying for some kind of examination. The subject of the test didn’t matter to the old Trakalan; that his target would be alone did. His protective circle of silence was one-way, so he could hear clearly any sound around him. It was such a useful magic that he planned to use a portion of his generous payment to buy an enchanted ring that could perform it.

Courting Kel by Dee Brice
The Bigot List: (A J.J. McCall Novel) by S.D. Skye
Beach Lane by Sherryl Woods
After the Dark by Max Allan Collins
Turn Right At Orion by Mitchell Begelman
The War Planners by Andrew Watts
The Real Doctor Will See You Shortly by Matt McCarthy
She's (Still) Too Young (She’s Too Young #2) by Jessa Kane
The Plum Rains and Other Stories by Givens John
Twisted by Jay Bonansinga
Our partner