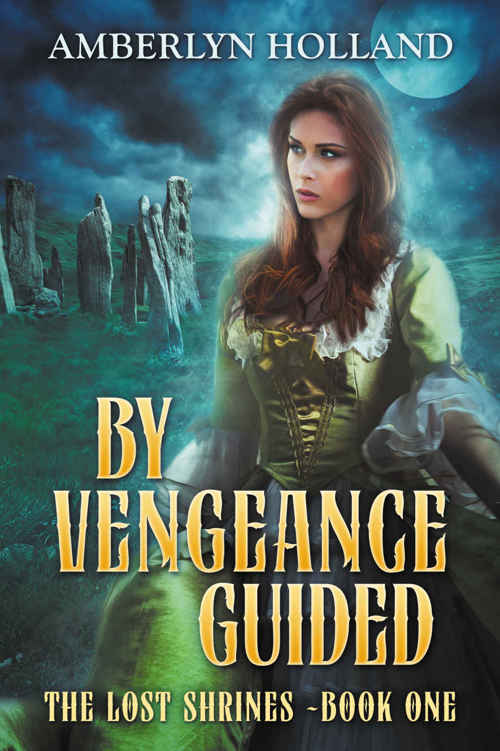 I will never share your email address and you can unsubscribe at any time.

All rights reserved. This book or any portion thereof may not be reproduced or used in any manner whatsoever without the express written permission of the publisher except for the use of brief quotations in a book review.
This is a work of fiction. Names, characters, places, and events are the products of the author’s imagination or used in a fictitious manner. Any resemblance to actual persons, living or dead, or actual events is purely coincidental.

For Mom, who gave me a strong foundation. And for James, who's always my rock.

Silent and measuring, Caerwyn watched the road from the shadow of the tree line, not wanting to spook his prey.

Magistrate Jeremiah Beste strutted up the path, dressed in black linen that was both too fashionable and too expensive for the simple village behind him. With graying hair curled and coiffed into a ridiculous architecture that did nothing to hide his balding pate, the popinjay looked completely out of place for the rural farming community.

Beste strode with purpose, negotiating the muddy road with deliberate swagger. His posture was straight and proud, as if he had all the right in the world to perform the nefarious task awaiting him in the woods.

The Magistrate paused before stepping off the rutted track and, for a moment, Caerwyn thought he'd been seen. But Beste only glanced over his shoulder to check the road and village behind him. Satisfied no one followed, he lit the small thief's lantern he carried.

The sliding panel would give Beste enough light to negotiate the treacherous trails without alerting anyone to his nighttime adventures.

His victims, already huddled and waiting in the picnic clearing deep within the woods, had had no such luxury. They'd been instructed to bring no lamp, to take no risk of being seen by the villagers. They'd had to traverse the winding, root-filled path in the gloom of the moonless night.

Enough was enough. Disgust gripped Caerwyn in a vice, and he stepped from the shadows to stand in front of Beste. The Magistrate juggled the lantern and took three quick steps back at the sudden apparition before him.

Like Beste, Caer wore clothes that were all black and expensive. That, however, was where the similarities ended. His breeches and vest were made for a specific purpose. The supple, soft leather moved easily, like a second skin. Tight enough not to be snagged and tough enough to offer some protection. The crisscrossed straps along the back of his vest left his arms and back vulnerable, but it would be a necessity for the task at hand.

Beste's open mouth pressed into a firm line, surprise flickering into annoyance on his sharp-edged features. He drew himself up and, though he stood a foot shorter than Caerwyn, managed to stare down his nose at the man blocking his path.

"Who are you? What is your business here?" he demanded. "Strangers lurking in the trees can only be up to no good. I should call the village watch."

"Perhaps you should." Caerwyn remained unmoving and forced the words to roll out cool and even. "But, then, they might discover the dirty secret you have waiting for you in the woods."

Caerwyn had to give the man credit. His eyes widened only slightly and his skin paled only a little before he regained his composure.

Clinging to his arrogance and self-importance, Beste prickled under Caerwyn's steady gaze, his pointed chin rising even higher in disdain.

"I have no idea what you're talking about. The town watchman isn't going to listen to a stranger's fairy stories against the Magistrate of the entire district."

"No?" Caerwyn smirked, allowing some of his pent up fury to flicker in his eyes. A glimmer of his tightly leashed power slipped out and the shadows gathered around them. The skin of his arms and hands began to glow with the soft golden hue that hummed along his flesh.

He leaned forward, like sharing a secret with a friend, and whispered in the Magistrate's ear.

"They might not believe a stranger. But the word of Caerwyn, Lord of Alwyn, Lord of Vengeance, will carry a little more weight, don't you think?"

His lips curled back in a feral parody of a smile when the air around Beste trembled with his fear.

"You can't… It's not possible. No one knows how to summon the Milesans or their Attributes anymore."

"Oh, but a few still do remember the old ways, and we are still honorbound to answer the call." He shook his head in mock sadness, clicking his tongue. "Unfortunate for you. Your latest victims listened when their Gran passed on stories."

He allowed another surge of power to flicker out. Energy charged the air, his dark hair whipping with it.

The Magistrate broke then.

Beste's chin touched his chest, his eyes locked on Caerwyn's feet, hands coming together in supplication, thumbs braced against his forehead.

"Did you have mercy for your victims? Or did you ignore their protests and pleas? Take advantage where you could with your power and their weakness? Choose your own gain and your own twisted pleasure?"

With a sob and more speed than Caerwyn would have credited, he darted to the side and made haste for the cover of the trees.

In his panic, he crashed through the underbrush, eschewing the trail. In seconds, the dense foliage and shadows of the forest swallowed him except for a peek-a-boo flash of the lantern. The occasional glimpse of light, and his thrashing, like a thousand bears stampeding through the woods, made tracking simple.

Caer whistled two short, sharp sounds and three pure white Hounds moved out of the shadows. The dogs, each waist high and solid muscle, milled around his legs, growling and straining toward the fading sound of flight.

Caer pointed toward the trees and smiled at the eager animals. "Go. Chase. Hunt."

As one, the Hounds leapt after their prey, three white blurs disappearing as quickly as they'd appeared.

Following behind the coursing Hounds, Caerwyn took in the obvious signs of flight. Even on the moonless night, the trampled undergrowth, the broken branches and the smell of sweat and fear made the Magistrate's passage clear to his eyes.

With senses more acute than any human, Caerwyn could have tracked Beste without any help from his Hounds. But they needed the exercise.

He heard Beste's labored breathing when the Hounds closed in. Knew from the scent and the sounds that the older man was pushing himself hard. Probably harder than he ever had in his life.

It took Caer less than a minute to catch up with the chase. The Hounds were holding back, only nipping at the bastard's heels. With bone shivering growls and snaps of their powerful jaws, they herded the Magistrate exactly where they wanted him to go. Pushing him in a wide arc through the forest and exhausting him before he got to the final destination they'd intended all along.

The three white Hounds weren't laboring at all, and neither was Caerwyn.

Jeremiah Beste was proving to be a disappointing hunt.

By the time the Hounds steered him into the wide clearing, the Magistrate stumbled and tripped with every weary step. The Hounds surged forward, pushing him further and cutting off escape.

With his head foolishly turned to watch his approaching doom, Beste never saw the log that caught at his feet. His own momentum worked with gravity to pull him to the ground in a wornout heap. The Hounds circled, hemming him in at the center of the clearing.

Beste still clutched the lantern though the headlong flight had long since extinguished the tiny flame. He blinked at it for a second as if it had betrayed him, then the sound of Caerwyn’s approach kicked in his coward's instincts once again.

The three Hounds stalked and snapped in an ever moving, vicious circle around the cringing Magistrate. Dropping the useless lantern, he collapsed in on himself, curling up and covering his face with his arms like some foppish hedgehog.

"Please don't let them eat me."

Maddyn, the largest of the three Hounds, made a snorting sound, and Caer had to cover up his own laugh at the notion.

"Please," Beste continued to plead and babble at his feet. "Please, I beg you, let me go. I have jewels. Gold. Land. Anything you want. It's yours."

"You have gold, treasure and land because you despoiled your position and made a mockery of justice in the entire district. You let the guilty go free if they met your price. You blackmailed the innocent with threats of imprisonment for your own gain and twisted pleasures."

"Lies," he shouted, desperation giving him daring when he met Caerwyn's gaze with practiced sincerity. "All lies. I swear. My enemies have spread rumors to discredit me. They wish to evade justice by shaming me. You must not believe them, my lord."

Beste schooled his features into sober innocence. Maddyn snarled and pushed in closer, no doubt reacting to the stench of the man's deceit. The Magistrate squeaked and attempted to inch away, only to find another of the Hounds breathing down his neck.

"There's a simple way to sort this all out."

Caer tilted his head up in a quick, silent command. The Hounds backed off a few feet and dropped to their haunches. They remained ringed around Beste, giving him no avenue of escape. The sudden silence of the clearing left an ominous resonance.

The Magistrate struggled up to his knees, finery rumpled, ripped and covered in mud. His hair drooped, heavy with twigs and dirt and sweat.

Beste opened his mouth, no doubt to continue pleading his case but Caerwyn held up one hand to command silence. His eyes shifted to the murk of clearing beyond the kneeling man.

"It's time to finish what you started, ladies."

Beste's face slid into a comical mask of surprised dread when a flame flared, lighting another lantern and revealing three young women waiting in the pitch black night. The sisters looked nearly identical with their pale blond hair and pale blue eyes, only three years separating the youngest from the eldest, who'd just turned seventeen.

With hesitating steps, they moved closer. At Caer's encouraging smile, the oldest, Brunhil, began to chant. Quickly, the other two chimed in, giving power and momentum to the words Caer, himself, had taught them earlier in the evening.

They had known only the chant to call him. When he heard their story, he broke convention. After making them swear never to reveal the secrets, he gave them the words they needed to summon his Attribute to their aid.

The recitation of words so ancient even Milesan scholars barely knew their meaning rolled through the silence of the heavy night air. The words circled around and began again, growing in volume as the girls grew in confidence and Caerwyn felt the power begin to weave around him. Shivers of energy zipped across his back, leaving a spiking itch in its wake.

He tilted his head back, staring sightlessly at the star-filled sky. The power of his Attribute flowed through him while the chant raced toward the pinnacle of its third refrain.

The prickling down his spine transformed into a cold sting, right before the familiar pain burst through his skin, along with the first traces of his wings.

He gritted his teeth against the burning ache and the vertigo that always accompanied his transformation. Six feet of feathers and bone and sinew unfurled behind him, making him fight to keep his balance. Forcing his eyes to remain open to combat the unrelenting dizziness, he occasionally caught the flutter of black feathers in his peripheral vision.