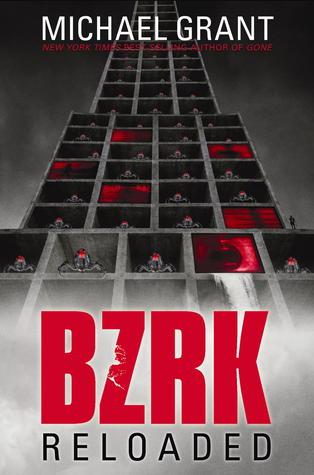 For God’s sake, Plath who is really Sadie McClure,

why didn’t you just do it?

Too precious to kill, are you, little rich girl?

Then what the hell are you doing in BZRK?

know this is a battle for the human soul?
Why didn’t you kill, Plath?
MICHAEL GRANT
REL OA DED
NEW YORK

All rights reserved. No part of this publication may be reproduced, stored in
a retrieval system, or transmitted, in any form or by any means, electronic,
mechanical, photocopying, or otherwise, without the prior permission of the

publisher and copyright owner.
Dedication TK
Being deeply loved by someone
gives you strength.
Loving someone deeply
gives you courage.
Lao Tzu
Kiss the crazy.

Wilkes is alive and back with us.
Ophelia is alive despite the loss of both legs below the knee.
Keats and Plath are both well and performed magnificently.
Vincent is suffering from a deep depression following the loss of one

biot. The second biot was badly injured but is recovering. Vincent is being
cared for, outcome very uncertain.
We failed in our main objective.

We await instructions.
To: Nijinsky
LearFrom:

During Vincent’s incapacity you are in charge of NYC cell, Nijinsky. You’re
the wrong person for the job. Become the right person.
Central Intelligence Agency—Office of Technology Threat assessment
Transcript of interview with Professor Edwin H. Grossman, February 28, 2012

(Page 7 of 9)
Q: In your opinion then, this is a serious threat but not an urgent one?
Grossman: I don’t know your definition of urgent. Look, the gray goo

scenario is not science fiction, not any longer. Nanotech is advancing by
leaps and bounds. There is some very important research going on at
MIT, and at UC Irvine, as well as in my own department at Texas.

Vincent felt the laugh building inside him. It was like a buildup
of steam in a covered pot. Like a volcano whose time to erupt has
come at last.

He was being torn apart.
His arms were handcuffed to two parked diesel locomotives, and
they were huffing and puffing, and smoke was coming up out of their
undercarriages, and the locomotives were so hot that the steel side
panels were melting.
He stood there between the tracks.
The chains were long. The engines would be able to build up
speed.
“Hah-hah-hah-hah-hah!”
He laughed, because it would be funny when his arms were ripped
from his body, when the flesh tore and the bones popped out of their
sockets like pulling the wings off a barbecued chicken and . . .
“Come on, man, lie down, lie down, lie down.”
Choo choo. Choo chooooooo!
“You’re going to be okay, Vincent.”
Who was Vincent? His name was not Vincent. His name was …
What was his name?
A dragon, one of those Chinese dragons, loomed over him, a
giant face, and there was smoke coming out of its nostrils and it was
the same as the smoke from the trains that were starting to move now,
starting to pick up speed, now.
“Uh. Uh-uh-uh! Uh! Uhhhh! UUHHH!”
The chains clanked as the trains pulled away.
“Take this pill. Take the pill, Vincent.”
Vincent thrashed, had to free his arms, they would rip his arms
off, his arms would be dragged off behind the trains!
“Uhhh-uhhh-UUUHHHH !”
“Goddamn it, take the pill!”
The dragon was ripping his mouth open; he was going to split
Vincent’s head open so that brains came gushing out of his mouth,
vomiting his own brains and . . .
The Chinese dragon was a nurse now, no, a dragon, no, no, no.
“Nooooo!”
A vice closed around his head. He smelled a masculine perfume.
Vincent felt muscles like pythons around his head and something was
in his mouth, and the dragon/nurse held his jaw shut even as he tried
to scream and beg for help.
“Keats. Help me! Get water.”
From the sky came a bottle.
Fiji water. Oh yes, that was the one with a square bottle, sure he
would drink some water, yes, dragon, I’ll drink some water like a
good boy.
“Get his mouth open.”
But the trains!
Vincent swallowed.
A voice he heard very, very clearly but through his head not his
ears said, “They’ll kill you, they’ll have no choice, they’ll kill you, kill
you, the mad king will send the mad emperor. Kill. You.”
But then his arms were ripped from their sockets—Snap! Pop!—
by the trains and he laughed and laughed.
And he felt sick.
He wanted to throw up.
“Like my brother,” a voice said.
The dragon, who was really just a man who smelled like perfume,
had an arm around Vincent’s head. The man was crying. So Vincent
felt like crying, too.
The other one, Vincent thought maybe he was a devil, he wasn’t
sure, he might have devil skin, and he had devil blue eyes.
“I don’t have arms anymore, Jin,” Vincent whispered.
“Jesus,” the possible devil with blue eyes said.
Jin—Nijinsky, the dragon, the nurse—didn’t say anything.
The drug came for Vincent. It called him to unconsciousness. As
he tumbled, armless, down the long, long black well, Vincent had a
moment of clarity.
So, he thought, this is madness.

She stood in the doorway, ready to help if Nijinksy and Keats had
trouble getting Vincent into restraints.

Ready to help. Her heart was beating as if it was made out of lead.
That beat, that unnatural beat squeezed the air out of her lungs;, it
clamped her throat.

Sadie McLure—Plath—had been just a little bit in love with Vincent. He had that effect on people. Not love love, not even attraction
in the usual sense of the word—that feeling was reserved for Keats,
who was working silently, quickly, to tie Vincent down. Keats looked
as shell-shocked as Plath felt.

So, not love love and not attraction for Vincent, but some weird
amalgam of protectiveness and trust. Strange to feel that way about
someone as cold-blooded as Vincent, someone so utterly in control.
Well, formerly in control.

Her fists clenched so tight that her neglected fingernails cut new
and too-short lifelines into her palms. She had taken too many hits,
too many losses: her mother, her father and brother. What was left to
her now?

They said what didn’t kill you made you stronger. No, it left you
with holes blown through your soul. It left you like Vincent.

Plath had been recruited by Vincent. She had trusted Vincent,
trusted him even with her life. And at the same time there had always
been the feeling that she should take care of him, not out of reciprocity, not because it was owed, but just because there was something in
that impassive face, in those dark eyes that spoke to her and said, Yes,
I need.

Plath knew she was not alone in this. The others, all of them, felt it.

But that Vincent, the cool, calm, relentless one whom you nevertheless wanted to shelter, that Vincent was not here any longer.
Madness.
Insanity.
It had been an abstraction, but now she saw it. Now she felt it, and
brave Plath was no longer quite so brave.
She turned away, unable to watch any longer.

Ophelia would have laughed at the idea that what didn’t kill you
made you stronger. Her legs were gone, one at the knee, one six
inches higher. She was not stronger.

But worse, like Vincent she had lost her biots. Had Ophelia been
capable of rational thought she might have contemplated the comparison between legs, actual, physical legs, and the biots, which were
not, after all, exactly original equipment for any human.

Her legs had burned like candles, melted like wax, down to the
bone. They’d amputated the barbecued stumps in the OR there at
Bellevue Hospital. But her biots were dead long before that, incinerated in the terrible disaster at the United Nations. By the time doctors
had taken what was left of her legs, what was left of her mind wasn’t
much.

Ophelia was guarded by FBI agents who labeled her a terrorist
suspect. There was one just outside the door to her hospital room, and
one at each end of the hallway, and one at the nurse’s station. So, had
Ophelia been sane, she probably would have been surprised to see a
man standing at the foot of her bed who was obviously not a doctor
despite his white coat. Underneath the white coat was a faded, lilac
velour blazer. His usual jaunty top hat had been set aside somewhere,
but he still had Danny Trejo’s face.

Caligula—he had no other known name—came close to her,
stood beside her. Ophelia gazed up at him and in a moment of clarity,
a brief gap between the painkillers and the mental anguish, seemed
almost to recognize him.

but Caligula answered as though it was, as though she could understand, even though her eyes had rolled up into her head and a manic
grin had distorted her lips.

“Wilkes got out. The others are alive.” And then he said, “You did
good, Ophelia. You were brave.”

He put a palm on her forehead, a gesture that was tender but not,
because he used the pressure to hold her head still as with a single
swift motion he buried the dagger to the hilt in her temple.

From his pocket he withdrew a small cylinder ending in a pointed
valve. He pulled the knife out and pushed the valve into the hole. He
opened the valve and let his own special mixture of white phosphorous flow into her brain.

An autopsy might just conceivably produce evidence of nanotechnology, and it was part of Caligula’s brief to stop that from happening.
That, and a mad Ophelia might eventually, in some disjointed rant,
have given up a deadly secret or two.

The only survivor of the UN massacre in custody was now no
longer available for questioning.
By the time Caligula left the room Ophelia’s eye sockets were
dripping liquid fire.

The president of the United States, Helen Falkenhym Morales,
was feeling gratified. She and her husband had just sat in bed and
watched Jon Stewart take apart the Senate majority leader, a Morales
foe. And for once the president had gone off-diet and actually eaten
most of a butterscotch sundae.