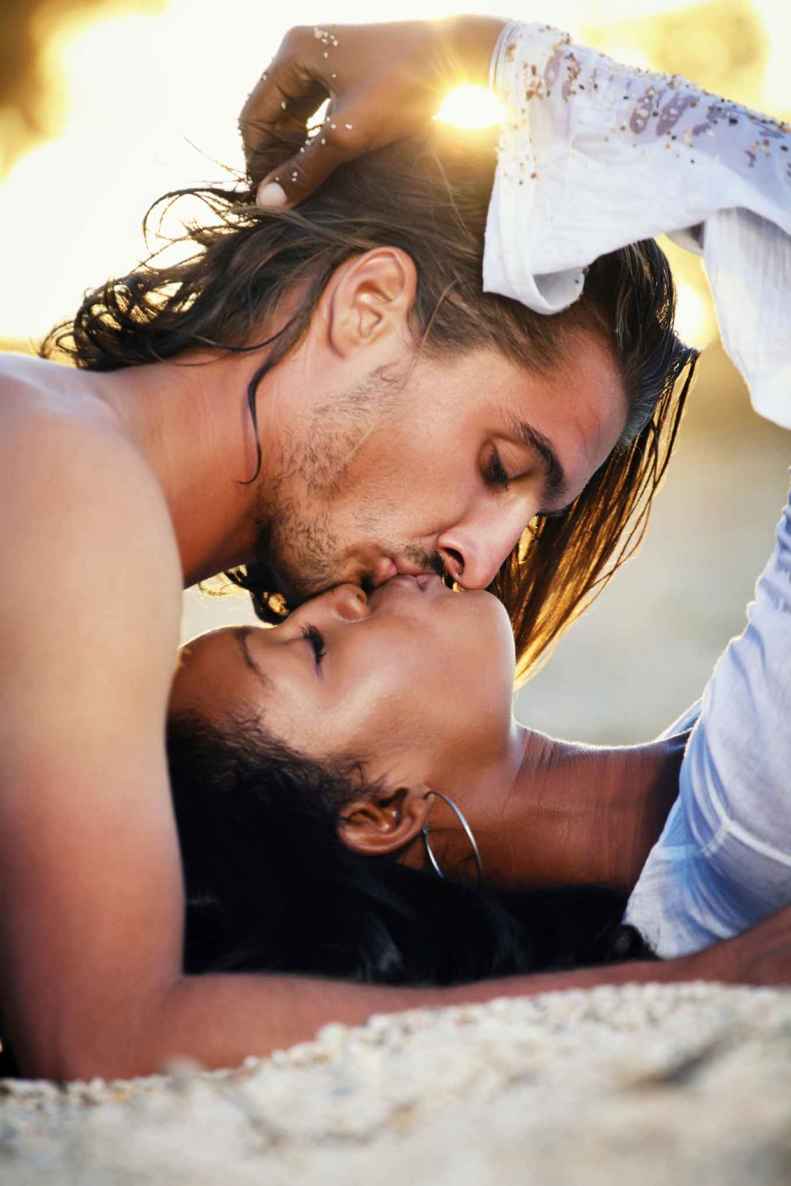 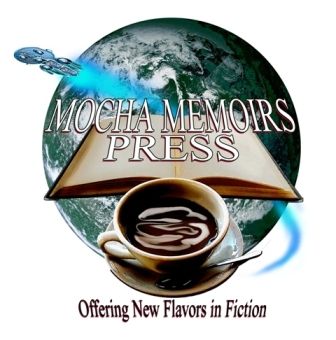 No part of this book may be produced or shared in any form, including but not limited to: printing, photocopying, faxing, or electronic transmission, without prior written permission from the authors.

This book is a work of fiction.  References may be made to locations and historical events; however, names, characters, places and incidents are the products of the authors’ imaginations and/or used fictitiously.  Any resemblance to actual persons (living or dead), businesses, events or locales is either used fictitiously or coincidental.

Other Works by Azod and Blue

We couldn’t do what we do without you.

“Where the hell are we?” Chanta asked. The arch of her delicately plucked eyebrows huddled together in a “v” above her chocolate-brown eyes. With her make-up immaculate and understated, she put any model to absolute ruin. Even frowning, Chanta could cause a traffic jam and a serious six-car pileup. “That doesn’t look like a fabulous island resort, Drew.”

Drew Nicholson watched his wife silently. Sure he could appease her. Hell, he wanted to, but he stayed silent instead, knowing she would soon either be on the phone with her assistant or typing messages on her blackberry. It was difficult to get and hold her attention these days. He didn’t begrudge her success, Lord knows she worked hard to get where she was at. It just seemed like the higher she climbed the farther apart they grew. He would do anything to rekindle their passion for one another.

“Drew?” she asked, turning in the seat to face him fully. “Didn’t you hear me?”

She waved him off as her Blackberry began to sing. “Hold that thought.”

The phone back on her ear, Chanta turned away, putting her back to him.

Drew liked her back, but he’d seen far too much of it lately.  He tapped his foot in time to the stream of soft classical music pouring from the limo’s superior surround sound.  His mind wandered back to the discovery he had made recently, the discovery that led to this impromptu vacation. Against the bubble of music and his wife’s voice, he recalled discovering her diary buried underneath old shoe boxes in the walk-in closet. The discovery had made him forget what he had originally been looking for. Hell, he still didn’t remember.

She gestured with her hands, hands he knew itched to be tied to the posts of their four poster queen. Oh, she’d yet to vocalize something so intimate to him, but he’d read her diary—and it outlined her fantasies. He had often dreamed of such things, but was always trepidacious to mention it to his conservative, buttoned up wife. She had been so wild and free once, when they first married. But  somewhere along the line sex had become perfunctory and rare. Now, here, at the Vette Resort, he meant to give her just what she been too shy to tell him—her fantasy made real. Just thinking of the things he had planned made him hard as hell. He had to sit at an awkward angle so she wouldn’t see the log that had grown in his slacks.  The thought of Chanta flushed with passion, sweating and panting the way she used to.

Shit, the anticipation was killing him.

Just the two of them in a cabin with unlimited access to room service should be sufficient for his plan to work. The equipment he’d brought along, carefully hidden in the suitcase she believed carried her vast and varied wardrobe, made small beads of sweat form on his brow.  If he had his way, his wife would be wearing very little during their stay here. Oh, she would pitch a fit when she found the designer “vacation” clothes were still at home in an identical suitcase, but if it went well she just might forgive him.

Lord, he prayed she would. They just couldn’t keep going on the way they had been. It was like sleeping with a stranger. The only thing she ever got excited about was the latest deal. Like now, on the phone with her prissy assistant—man he really could barely tolerate that woman—going over some red-hot deal that had to be taken care of right away. With the real estate slump, Chanta was quick to jump on a deal. Apparently, even when they were supposed to be relaxing and rekindling the dying flame that was their marriage.

He had plans for that Blackberry of hers. Just as soon as they arrived.

“Sir, we have reached the cabin.” The limo driver’s announcement came right on time. The consistent chatter about the buyer and closing costs was quickly starting to work on his last nerve.

“Drew this cannot be the cabin.” Well at least Chanta had managed to pull herself away from the all-too important phone call long enough to peer out the window at the log cabin.

The isolated log cabin. Just down the dirt road was a much larger, all-inclusive resort, but he had no intentions of letting Chanta know that. She would be out of here and ensconced in a suite and on her laptop in a heartbeat. Too bad the cabin didn’t have internet and wouldn’t you know it, he had forgotten to pick up the mobile internet device she had left by the front door. Oops.

“You have got to be kidding me,” Chanta groused climbing out of the limo, ignoring his outstretched hand of course.

That would change damn it. He loved this woman, more than he thought possible to love anyone. He was bound and determined to show it, to let make her let him show it.

“It is right on the beach, Chanta and it’s cozy. This is supposed to be romantic remember?”

He reached down to kiss her, but she turned her head, already back on the phone, so he ended up kissing her cheek. Ah, well. There was time to get her to see HIM for a change, and he was going to use it.

“I cannot believe this. I will be online in a few. I will email you a new proposal, but do not use it unless he waffles. This is a sweetheart deal, damn it. He had just better realize it.”

No she wouldn’t, but Drew kept his mouth shut, helping the driver inside with luggage after Chanta’s wake. His wife never simply walked anywhere. She had this stride where her hips swung ever so gently from side to side. He cast one warning glance at the driver who quickly averted his eyes and watched in earnest himself. Still as fine as the day he married her.

“Now I know you are kidding!” Chanta had hung up the phone and was standing in the middle of the one-room cabin, mouth agape.

There might have only been one room, other than the restroom, complete with a huge garden tub she had yet to see, but the space was huge. The California king bed, complete with a very nice, sturdy wrought iron headboard sat in one corner. There was a fireplace complete with bearskin rug and assorted pillows, a large overstuffed couch, and even a large kitchen area. Their meals would be delivered of course, but the kitchen was stocked with all sorts of gourmet snacks. It was perfect. No desk, no television, nothing to distract from the main point.

“I am not staying here.” Chanta pivoted on a heel, a move she had perfected recently, hands on her hips. “So you can take the luggage right back to the limo now.”

Drew smiled. His first genuine smile in a while. He tipped the driver and saw him to the door.

“Drew, did you understand what I just said to you?”

“Yeah, baby I heard you, but we aren’t going anywhere.” Walking right up to her, he tilted her chin upward with one finger. “This is about you and me, about our relationship. Not any of your deals, not spa treatments and shopping. This is about getting to know one another again. And baby that is exactly what’s going to happen.”

He reached down, gently pried the Blackberry from her hand, and walked over to balcony window. The place had been built on an incline, but you couldn’t tell that from the front. The back porch, however, hovered high from the ground with a wooded area all around. A beautiful view of the trees and the beach could be seen from the back. Beach and wilderness, how could you beat that? He took the instrument of distraction and chucked it over the balcony, not bothering to look where it went.

“Now, are you going to undress for me, or do you want me to do it?”

Chanta met her husband’s ice-blue eyes and tried hard not to curse him out. Was he suddenly mental? Did the flight fuck up his brain chemistry? Did he think for one second that his pressuring her to this ridiculous bumble neck island would put her in the mood for sex? If he had, he’d been all kinds of wrong. And then to throw out her phone like it wasn’t a $200 piece of essential equipment. She had major work to do, and he’d thrown it away like it was a freaking toy! Navigating this busted ass real estate market took patience, persistence, and pampering of potential buyers.