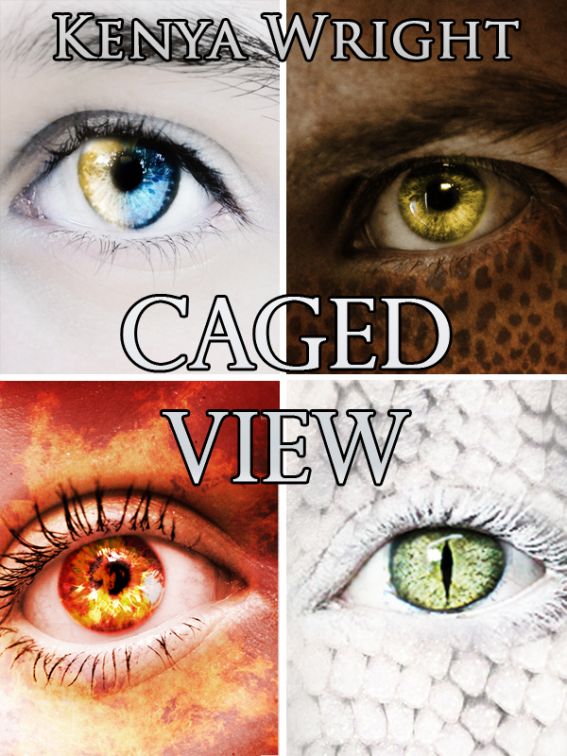 Since the 1970s, Humans have forced Supernaturals to live in caged cities known as habitats. Supernaturals are tagged at birth with silver brands embedded in their foreheads to identify them by species: a full moon for Vampires, a crescent moon for Shifters, a pair of wings for Fairies, an X for Mixbreeds, and the list goes on. Each supernatural species has been tagged and categorized by Humans.

Each habitat is themed and organized by a particular religion. This short story collection is set in the Santeria habitat. The first three stories are in the points of view of characters (MeShack, Zulu, and Lanore) from the novel Fire Baptized, and serve as a prequel to that story. The last short story is from the point of view of Cameo, a character who lives in the Santeria habitat and is from the young adult novel Chameleon, scheduled to be released in June of 2012.

Love Lost, Love Found
Point of View: MeShack
MeShack's mother has been missing for several weeks. Lanore and MeShack search the Santeria habitat for her, only to find something that changes his life forever.

The Heart Ripper’s Song
Point of View: Zulu
All in Santeria speak of Zulu the Heart Ripper. Drug dealers fear him. Women swoon at his feet. Too bad the one woman he wants is not impressed at all by his heart-ripping antics. He’ll have to dig deeper to get her attention.

The Vicious Circle
Point of View: Lanore
Lanore stumbles from one self-destructive choice to another as she struggles to align her mind’s decisions with her body’s wants.

Cameo lives in a caged supernatural city where all species are tagged at birth with silver brands embedded in their foreheads. Her X brand identifies her as a Mixbreed, but she’s so much more. Like a chameleon, she can shift from one person’s image to another.

It’s a great way to make money for a habitat street kid, or Cage Punk as most people call them. Wiz, her street partner-in-crime, finds her jobs to use her abilities. Some jobs entail changing into people to take academic tests. Others require more skill and involve higher risk.

So when Wiz asks Cameo to stand in for a Were-wolf teenager who doesn’t want to go to her debutant ball, it seems like just another job, until a corpse is discovered and Wiz is singled out as the killer. Now Cameo has to prove her innocence or lose the only person who’s ever shown her any love and respect.

This is a work of fiction. All characters,
organizations, and events portrayed in this novel are products of
the imagination or are used fictitiously.

Since the 1970s, Humans have forced
Supernaturals to live in caged cities known as habitats.
Supernaturals are tagged at birth with silver brands embedded in
their foreheads to identify them by species: a full moon for
Vampires, a crescent moon for Shifters, a pair of wings for
Fairies, an X for Mixbreeds, and the list goes on. Each
supernatural species has been tagged and categorized by Humans.

Each habitat is themed and organized by a
particular religion. This short story collection is set in the
Santeria habitat. The first three stories are in the points of view
of characters (MeShack, Zulu, and Lanore) from the novel
Fire
Baptized
, and serve as a prequel to that story. The last short
story is from the point of view of Cameo, a character who lives in
the Santeria habitat and is from the young adult novel
Chameleon
, scheduled to be released in June of 2012.

I knew what Felix, that motherfucking
Were-rat, was going to do before he did it.

His freckled hand stretched out a foot from
his hip. He glided toward La La as she stuffed a pair of thick
books into her orange locker.

I peeked further around the corner.

Felix’s gray eyes targeted the plump curve
of her behind.

Kill him
, the cheetah inside me
ordered, always impatient and ready for a quick fix. The beast
slammed his sharp claws against the inside of my ribcage when I
didn’t move, stinging the tissue surrounding it.

Relax
, I told him and shifted my eyes
so my cheetah could see him better.

My beast stirred within me, full of
excitement.

Felix whistled through cracked lips as he
approached his destination. He checked the hallway around him,
probably noting that it was just La La and him.

I gritted my teeth, dropped my book bag, and
leaped toward the Were-rat in a blur of speed that impressed even
me.

Felix shrieked and dove to the side.

I seized his pudgy arm and slammed him into
the lockers across from La La. A crash bellowed from the now-warped
metal.

“What are you doing?” La La’s dreadlocks
whipped around as she whirled my way. Alarm spread across her
face.

I smashed his jaw with my fist. Bones
crunched under the impact. His white skin swelled and thrust a few
inches toward me as the bones re-formed back to new.

“I saw where your hand was going.” I gripped
his shoulders, shoved my claws out of my fingertips, and pierced
his skin.

Felix yelped as the locker’s metal dented
under his weight. Breathing in and out at an erratic pace, he
wobbled his head from side to side. “MeShack, I wasn’t—”

“Give me your hand.” I inhaled his fear. It
smelled like boiled peaches.

“Man, I wouldn’t touch her,” Felix mumbled.
Beads of sweat formed around the crescent moon brand embedded in
his forehead. Red hair stuck to his wet skin.

“I hate repeating myself,” I said and
spotted La La coming up on my right, bringing her lavender
fragrance that haunted me even when I was asleep. Her X forehead
brand shined in the ceiling’s light.

“Don’t do it, MeShack.” She moved her
dreadlocks away from her face with chocolate fingers and peeped
behind her shoulder, searching the hallway for teachers or, even
worse, Principal Hendricks. “He didn’t do anything. Let him
go.”

“She’s right, man.” Felix’s heart hammered
against his chest. My beast and I were both thrilled at the sound
and hoped Felix would free himself. We hadn’t chased anyone in
months.

“I didn’t touch the Mixbreed.” He shivered
under my grip.

“You know her name. Say it.” I dug my claws
deeper into his skin.

“Lanore,” he whimpered and hit the back of
his head against the locker.

The temperature around us increased from
warm to sizzling.

I had no doubt that she was preparing her
body for fire.

She never lets us have fun
, my
cheetah said.

“Take your claws out of him,” La La insisted
and placed her hand on my arm, sending a scorching heat into my
flesh.

A vicious pain seared all of my senses. My
skin bubbled under her fingertips as my ears rang. White light
shined over my eyes. Fangs broke free from my aching gums. My lips
quivered.

She removed her burning hand.

I found the breath that I’d lost; the burns
on my arm instantly healed.

The cheetah retreated within my core, no
longer wanting to deal with the situation.

She always has to use her damn fire to make
a point.

“Was that necessary?” I hissed and clamped
down hard on Felix’s shoulders. His bones shattered under my
fingers.

Felix screamed. The noise rose high above us
to the school’s ceiling and down the hallway, no doubt hitting all
the ears of the Supernaturals hanging out in the commons area.
There would be a crowd soon.

She tried to burn me again.

I tapped her hand away.

“Leave him alone.” She gave up and crossed
her arms over her chest. “The point is, he didn’t do whatever you
think he was going to. MeShack, you’ve now gone from hero to
bully.”

I dragged my claws out of his skin, taking
tattered flesh with me. “Say sorry.”

“S-sorry.” Felix gently rubbed his right
shoulder with his hand.

“Not me, you furry sewer bastard.” I edged
closer to him until my nose was an inch from his. “Say sorry to La
La.”

Felix faced her. His body shook. Blood
dripped from his wounds down to the apricot linoleum-tiled floor.
He placed his hand on the dented locker to maintain his balance.
“I’m sorry, La La.”

“Only I call her that,” I said in a low
voice as I wiped my slimy fingers on his shirt.

She glanced uneasily at the Were-rat and
sighed. “Thank you, Felix.”

He checked for my reaction.

He raced away, leaving his books on the
floor.

“Come on, before Hendricks suspends you
again for fighting.” Lanore’s small hands grabbed my arm to guide
me toward the front entrance. “You’re freaking ridiculous.”

“I’m not afraid of him either.” I flexed my
bicep, making the muscle expand against her palm.

Within seconds, we approached our high
school’s double doors.

“Stop bullying guys over me.” She released
her grip from my arm and strolled through the exit.

“Would you rather he grab at you like a
piece of meat?” I asked as the school’s doors slammed behind us.
“He’s always cornering girls by themselves and groping them.”

Sunlight’s rays leaked through the city’s
barred ceiling and washed over me, giving my caramel skin a
much-needed tan. The longer I stayed in the sun, the more my flesh
shined like gold.

Badlands: The Lion's Den by Georgette St. Clair
Were Slave (2010) by Slater, Lia
Stonehenge by Rosemary Hill
Kindling Flames—Gathering Tinder by Julie Wetzel
An Aegean Prophecy by Jeffrey Siger
Flea Market Fatal by Brianna Bates
Crazy Rich Asians by Kevin Kwan
Mating Fever by Crymsyn Hart
The Auerbach Will by Birmingham, Stephen;
Get Off on the Pain by Victoria Ashley
Our partner