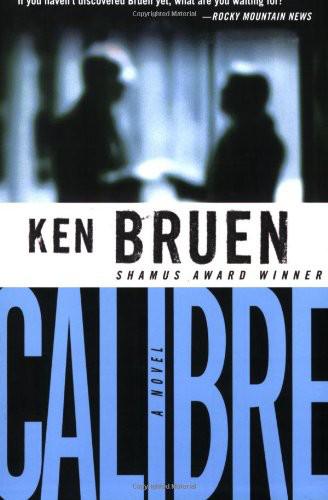 CALIBRE
. Copyright © 2006 by Ken Bruen. All rights reserved. Printed in the United States of America. No part of this book may be used or reproduced in any manner whatsoever without written permission except in the case of brief quotations embodied in critical articles or reviews. For information, address St. Martin’s Press, 175 Fifth Avenue, New York, N.Y. 10010.

—Jim Thompson,
The Killer Inside Me

SHIT FROM SHINOLA. You have to hand it to the goddamn Yanks, they have great verbals, man. I love the way they cuss.

I killed my first last Tuesday, I can’t believe it was so easy. Remorse? Not a fuckin’ trace. Only sorry I didn’t do it sooner.

I’m forty-four years old, and I guess I’m what you’d call a late starter. Or as them Yanks have it, a late bloomer. Thirty years I could have been mowing down the fucks and what was I doing?

I think it was Bob Geldof who said work was the biggest con of all. I listen to The Rats with ‘I Don’t Like Mondays’ and I’ve got my soundtrack down. They nailed it. The silicon chip inside my head just switched to overload.

Been a long time coming.

My old man, Anthony Crew, worked in an asbestos factory all his life. The last ten years he spent coughing up blood
and gook till his eyes bulged. His employers, did they cover the hospital bills? They did fuck-all.

The National Health Service did the best they could but he was fucked and gone; he was dead and didn’t know it, wouldn’t lie down. The Mick in him, those Paddies, tough sons of bitches. Every Sunday I went round his gaff, a council flat on Railton Road, and listened to him cough. James Joyce is buried in Switzerland near a zoo, and his wife, Nora Barnacle, said:

‘He liked to listen to the lions roar.’ Brixton is as close to a zoo as it gets. My dad, his face contorted to grotesque degrees of agony, and I wanted to kill some fucker.

My heroes. I’ve read crime fiction for over twenty years, can’t get enough, black as it’s painted. The classic hard-boiled, though, these guys are the biz.

Shit-kickers par excellence. My bookcase is an homage to pulp:

Here’s a thing. I can’t read Chandler’s novels any more, but his letters, phew-oh, now you’re cooking. They’re on my bedside table, resting on my old man’s Bible. His book passed down through generations of navvies to land here in Clapham. Could be worse, could be Kilburn.

Used to be if you were in a hotel and wanted a hooker, open the Gideon Bible back page, bingo. Not any more. I blame the Internet, all that cybersex and chat rooms, they’ve taken the zing out of dirt.

I’m not going to get caught. I’m due for another kill on Friday, a woman this time, keep the balance. The reason I won’t get caught is not just cos I’m smart but I have an edge.

So I’m au fait… With all the DNA fibres, signatures, trophies, crap. Two things in my corner, I’m random and I’m careful.

I’ve read the true crime books, from Ann Rule through Joe McGinnis to Jack Olsen. Man I know my shit. Am I a psychopath? A sociopath? A paranoid schizophrenic? A narcissistic disorder? A blip on the human radar?

Who the fuck cares. What I am is good and angry, like Peter Finch in
Network
. You think you can label me, tame me?

I’m the pale rider of Clapham.

But hey, let’s get it down. I’m not into weird shit. None of that cannibalism or jerking off on bodies. Jeez, I hate that stuff. Truth to tell, I can’t even read about it. And child molesters? Don’t get me started.

Kids? Would I kill a kid? No way, José. Not unless he was in a boy band.

This is my reality TV. Killing for prime time.

Here’s another thing, hope you’re taking notes cos, like, I’ll be asking questions. Ever see that profiler shine they pedal? Me now, they’d typically pin as:

You want to know how they catch serials?

Luck, dumb friggin’ luck. Bundy got stopped for a busted tail-light. I don’t have a damaged vehicle, no sirree. I’ve got cash; and if I ever get stupid, I’ll get a pick-up, a hound dog, and a shitpile of Hank Williams.

You ever hear of a killer into tunes? Apart from looney ones? I listen to music all the time.

Not the mag, me. I’m beat. This writing isn’t as easy as the pulpists would lead you to think. I’m learning the craft from Chandler’s letters. All you ever need to know, he not only tells you how but why.

Oh and another reason the dumb fucks keep getting apprehended? Someone drops a dime. The Irish disease, like alcoholism, is ratting out. They invented Guinness but also the fink.

So don’t talk. You don’t talk, there’s nothing to rat out. ‘Loose lips sink ships.’

Gotta get some zzzz’s.

And I’m not lazy, whatever else I am. I’ll tell you everything
.

—Jim Thompson,
The Killer Inside Me

SERGEANT BRANT WAS in the canteen. Slung over the back of his chair was a Driza-Bone jacket. He was licking the chocolate off a Club Milk; the sounds he made were deliberately loud, exaggerated, and having the desired effect. Cops at nearby tables were aware of him, powerless to shout:

Brant was a pig, worked at it. He was heavily built with a black Irish face that wasn’t so much lived in as squatted upon. He was wearing a very expensive suit that whispered:

He had numerous schemes running, all illegal, that kept him in a style ill-suited to a sergeant in the SE London Met. The brass knew he was dirty, he knew they knew, but proof remained elusive.

Superintendent Brown had tried for years to shaft him.

Brant was deeply tan. Another feature not common to cops. He’d wrangled his way onto a Police Exchange Scheme in Australia and spent two weeks sydney. To annoy his immediate
superior, Chief Inspector Roberts, he now littered his speech with Strine, Oz slang. Roberts, seriously irritated by Brant’s chocola, moved his own tea aside, said:

Brant now wished he’d dunked the last of his Club Milk in his tea, few things matched the melting chocolate rush. He reached in his jacket, took out a pack of Peter Jackson, a twenty-five box, as is the norm in Oz. Plus a battered Zippo. All over the canteen were decals, roaring:

Well, not in Kraut but with that tone. Roberts sighed as Brant cranked the lighter, an old inscription on the side, barely legible:

Brant smiled, not his usual wolverine but something near regret, shrugged it off, said:

Sweet Olive (9780310330554) by Zondervan Publishing House
The Road to Hell by Michael Maren
Dead No More by L. R. Nicolello
Nobody’s Hero by j. leigh bailey
Dawn of Swords by David Dalglish, Robert J. Duperre
The Fat Man in History and Other Stories by Peter Carey
The Horseman by Marcia Lynn McClure
Commencement by Alexis Adare
Muscling In by Lily Harlem
Still a Bad Boy: A New Adult Romantic Suspense by Scott, Ada
Our partner