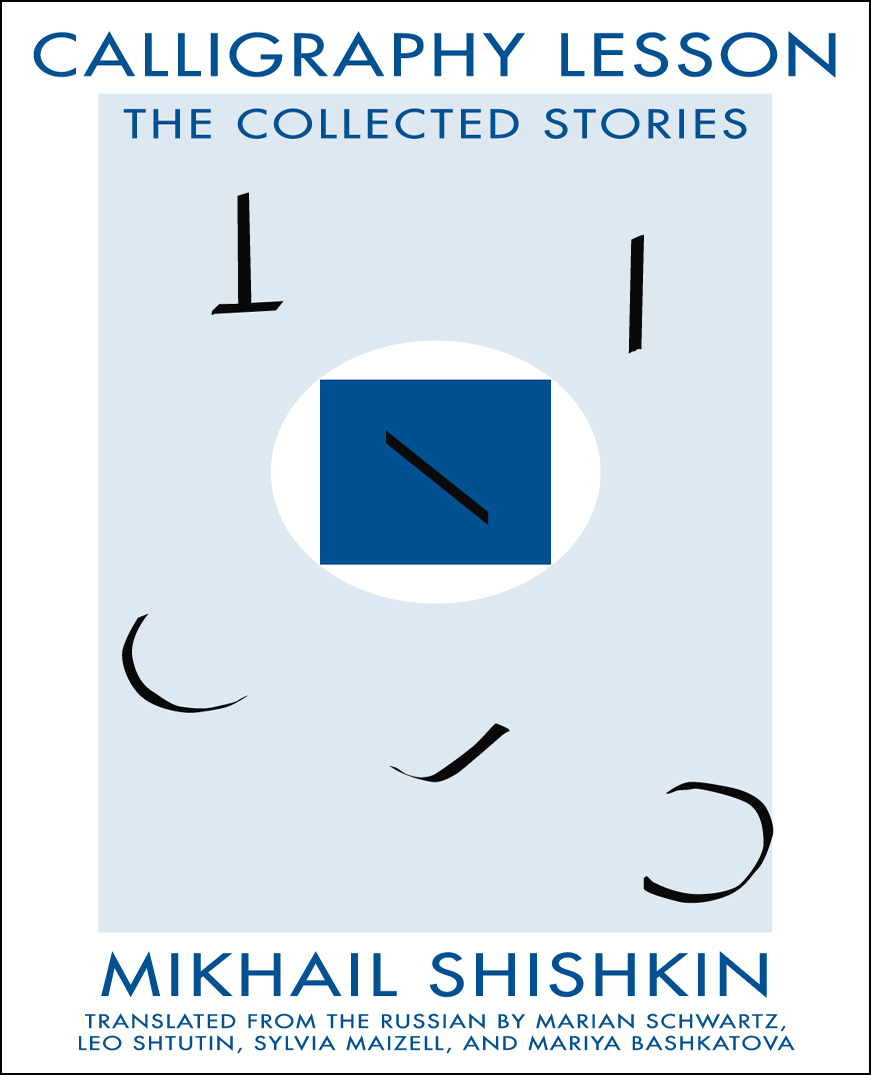 Calligraphy Lesson
is the first English-language collection of short stories by Mikhail Shishkin, the most acclaimed contemporary author in Russia. Spanning his entire writing career, from his first published story, “Calligraphy Lesson,” which heralded an entirely new voice in post-Soviet Russian literature and won him Russia's prestigious Debut Prize in 1993, to creative essays reflecting on the transcendent importance of language, to the newest story, “Nabokov's Inkblot,” written in 2013 for dramatic adaptation by a theater in Zurich. A master prose writer and unique stylist, Shishkin is heir to the greatest Russian writers, such as Tolstoy, Bunin, and Pasternak, and is the living embodiment of the combination of style and content that has made Russian literature so unique and universally popular for over two centuries. Shishkin's breathtakingly beautiful writing style comes across perfectly in these stories, where he experiments with the forms and ideas that are worked into his grand novels while exploring entirely new literary territory in the space between fiction and creative nonfiction as he reflects on the most important and universal themes in life: love, happiness, art, death, resurrectionâ¦

“Shishkin is interested in what is most precious and singular in classic Russian fiction: the passionate inquiry into what, in
Maidenhair
, is called the âsoul, quintessence, pollen.'”â
SAM SACKS
,
The Wall Street Journal

“Shishkin has been described as the heir apparent of the great Russian novelists, and indeed, there are times when he seems to have taken the best from each of them.”
âThe Quarterly Conversation

“As an extraordinary prose stylist, Shishkin has license to be unconventionalâ¦
Maidenhair
is likely a work of genius.”â
World Literature Today 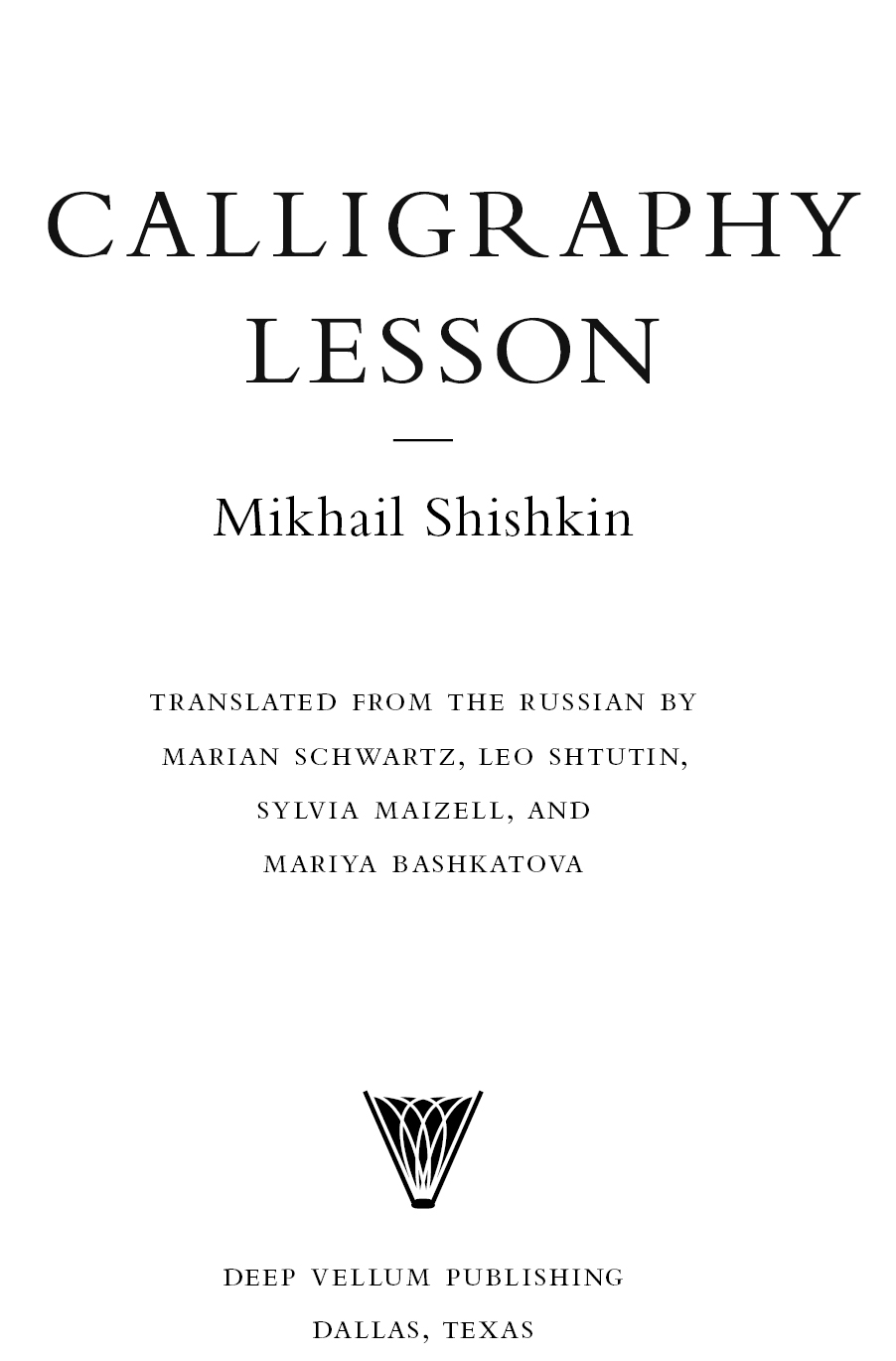 Published by arrangement with the author and the BGS Agency.

“In a Boat Scratched on a Wall,” “The Blind Musician,” and “Language Saved” Â© 2015 by Marian Schwartz

Some stories were published previously:

“The Half-Belt Overcoat” in
Read Russia: An Anthology of New Voices
(May 2012)

“Of Saucepans and Star-Showers” in Spolia (March 2013)

“In a Boat Scratched on a Wall” originally appeared in slightly different form as “Mikhail Shishkin: A revolution for Russia's words” in the
Independent
(March 22, 2013)

The publication of this book was made possible with the support of the Mikhail Prokhorov Foundation's Transcript program to support the translation of Russian literature.

Text set in Bembo, a typeface modeled on typefaces cut by Francesco Griffo for Aldo Manuzio's printing of
De Aetna
in 1495 in Venice.

Deep Vellum titles are published under the fiscal sponsorship of The Writer's Garret, a nationally recognized nonprofit literary arts organization.

THE BELL TOWER OF SAN MARCO

IN A BOAT SCRATCHED ON A WALL

There's a famous police photograph of Robert Walser, taken at the place of his death: winter, a white incline, tracks in deep snow, a man fallen supine, arms outstretched. His old man's hat flung to the side. That's how he was found by children on their Christmas walk.

He described his own death in a story published half a century before his final Christmas. The protagonist of this brief little tale is a lost soul, inconspicuous, needed by no oneâand yet, to make things worse, also a genius and master of the world. He wearies of being unneeded and escapes from his troubles like this: he buries the world in a snowstorm and lays himself down in a drift.

Foreknowledge of one's own death is not, however, the privilege of the writer. It's just that it's easy to catch him red-handedâin the literal sense: the hand records whatever is revealed to him at a particular juncture. Such breakthroughs happen in every person's life. Holes in matter. Points of transmission. In such moments the composer comes by his melody, the poet his lines, the lover his love, the prophet his God.

In that instant you encounter what everyday existence holds asunder: the visible and the invisible, the worldly and the sacred.

You begin to breathe in time with a space in which all things occur simultaneouslyâthose that have been and those yet to be.

Reality has been playing hide-and-seek with you, hiding behind the
past and the future like a child who's squeezed himself in under the fur coats hanging in the hallway, and now jumps out at you, sweaty, happy, bursting with laughter: here I am! How'd you manage thatâwent right past and didn't see me! Now you're it!

To see your own death in such a moment is nothing, for there arises in all its glorious patency the knowledge that I was never born, but have always been. Suddenly comes the realization that there's no need to cling on to life, because I
am
life. And it is not I who can sense the smell of mulch exuding from the forest's mouth, it is the universe sniffing its own scent with my nostrils.

The Good, the Bad and the Ridiculous by Khushwant Singh
A Roman Ransom by Rosemary Rowe
Fadeaway Girl by Martha Grimes
Star Force 12 Demon Star by B. V. Larson, David Vandyke
Sleeping through the Beauty by Puckett, Regina
Rescuing Rory by N.J. Walters
Scandals of an Innocent by Nicola Cornick
Skin Walkers: Gauge by Susan A. Bliler
Songs in the Key of Death by William Bankier
Analog Science Fiction And Fact - June 2014 by Penny Publications
Our partner