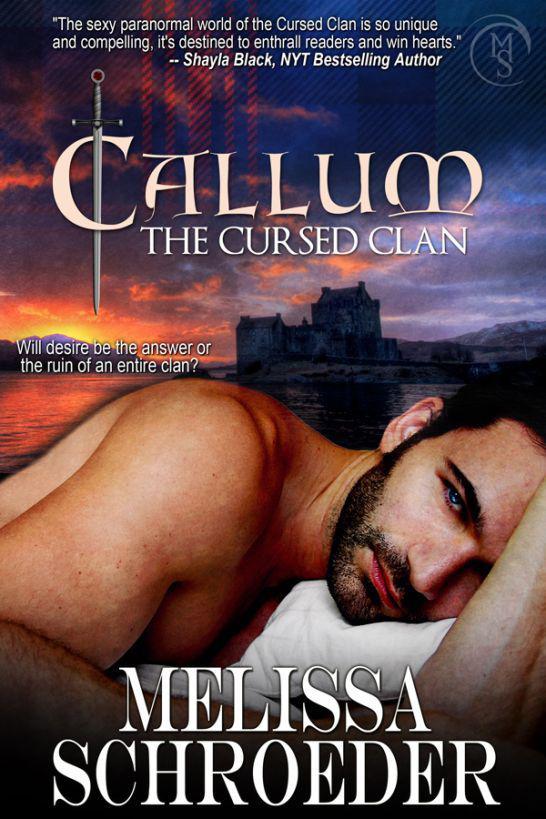 As Laird, Callum Lennon feels he has always failed to protect his cousins. Callum’s impulsiveness caused the death of his father and the experience has scarred not only his body, but his soul. From that point on, he made sure to always go with the more logical choice in every matter. When his younger cousin Angus finds clues that might help break the curse, Callum begrudgingly hires Phoebe Chilton to investigate. Callum doesn’t like bringing outsiders into their family affairs. Their life would become fodder for the tabloids if anyone were to find out about the curse. It doesn’t help that the instant he meets Dr. Chilton he’s attracted. But, he doesn’t really have a choice because she might be their last hope.

An expert in archeology, Phoebe has always been dwarfed by her parents’ shadow. Their high standards had her in college by thirteen and earning a second PhD by twenty-two. But her career and her broken marriage have left her needing something more than just diplomas and degrees. She wants to prove that her interest in legends, especially Celtic legends, is as important as her parents’ work. When the Lennon family contacts her, she sees the opportunity to win a massive research grant. With a long-time rival breathing down her back, she jumps at the Lennons’ offer her, hoping it will ensure her the grant. But uncovering the Lennon family secrets, and her attraction to Callum, could prove more than she can handle.

Forces outside the family are determined to ensure that they fail. When an old enemy threatens both the well being of the clan and the fragile new love, Callum will have to choose between believing his mind or his heart.

To Les, because he told me to write it no matter what anyone said. Love you, babe.

There is so much to be said about this book. Back in 2007, I came up with the idea for this series. It actually finalled in the Romance Junkies Reader contest (under an assumed name). It was shopped to NY houses, pitched to digital, and nothing happened. I was told to keep waiting. But thanks to self-publishing and the support of my readers, I am able to release it. I hope you enjoy it as much as I did writing it. Special thanks to Kris Cook, Chloe Vale, Kendra Egert and especially to Brandy Walker who urged me to expand my horizons and release it. Thanks everyone for your support.

eBooks are
not
transferable. They cannot be sold, shared or given away as it is an infringement on the copyright of this work.

All Rights Are Reserved. No part of this book may be used or reproduced in any manner whatsoever without written permission, except in the case of brief quotations embodied in critical articles and reviews.
First electronic publication: February 2012

Death would be too kind for the Clan McLennan.

Donedella McWalton clutched her husband’s faded plaid to her chest. Even as fear slithered down her spine, she knocked on the door to the witch’s remote cottage. As she waited, a chilling gust of wind stole through the thrashing branches of the winter-bare trees.

From above, an owl screeched. She shivered. Before her nerves settled, the door creaked open. Donedella saw no one standing before her. She hesitated in the gaping doorway, which earned her a disembodied cackle.

“Come in, my lady,” an ancient voice called from behind the door.

Donedella’s heart skipped a beat. Bolstering her courage, she skittered over the threshold, eyes darting around the room. With only the light from the hearth’s fire, it took a moment for Donedella’s eyesight to adjust. No bats hung from the ceiling. No potion boiled over the fire. But as the flames danced, the shadows moved and dread twisted through her.

She jumped at the sound of her name and toward the voice. Donedella had imagined the woman to be older, scarier. But this woman was not much different from herself. The kerchief on her head covered what looked to be a mop of curly gray hair. Her simple peasant clothing draped over her generous figure. Even as Donedella noted the normal dress, she sensed dispassionate study from the woman who earned her keep off the misery of others.

The witch walked forward, her steps sure and steady. She stopped within an inch of Donedella.

“You want to kill someone?”

The old woman humphed and paced away. Donedella watched her, wondering if the witch would do what she requested. Or could. This witch was her last chance. Her last hope. Without the woman’s help, the vile McLennans would ‘ner pay for their crime. Panic raced through her, curdling her stomach. She swallowed the bile in her throat.

The witch glanced over her shoulder, and Donedella almost gasped. The cold, calculating gleam in the other woman’s eyes sunk into her bones, chilling her from the inside out. She fought the shiver that raced down her spine.

“For this you shall pay...handsomely?” The smile she flashed Donedella had nothing to do with pleasure.

Drawing in a deep breath, she nodded. “Aye. I’ll pay anythin’ to have my revenge on the McLennans.”

The older woman glanced at the plaid Donedella held. She’d almost forgotten she’d brought it. “I see you have the plaid. You know what you are asking? You know that this curse is not done lightly?”

Before she could allow her conscience to get the better of her, Donedella let the pain of the last four months bubble up inside her.
The death of her beloved, the murder of her sons, and the ending of their clan as they knew it was too much to bear.
Even as she knew that the spell she sought would condemn her soul to hell, she could not stop the hate. It swept through her, whirled into her heart, into her soul, demanding vengeance.

“I want them tae suffer.”

“’Tis as you wish, my lady.” The fire snapped, the flames jumping as the witch nodded again and turned from her. “They will suffer, indeed.”

Callum Lennon dropped the file folder into his briefcase and sent his younger cousin an irritated glare. “You said she would be here at two, Angus. It’s now four, and I’ve got a meeting on the other side of town. I’ll never make it on time.”

Angus adjusted his wire-rimmed glasses and studied him. The younger man graced Callum with an expression rife with his legendary patience.

Damn
. Every department head claimed when they received
The Stare
, they knew they’d lost the argument. Callum supposed this wasn’t any different.

“She’s running a little late. It isn’t her fault London was fogged in,” Angus pointed out.

Callum grunted. “It’s her fault for coming from London in the first place. Bloody Sassenach.”

Angus smiled but said nothing in return. Everyone in the family knew Callum distrusted all things English. His younger cousins could have the luxury of an open mind. But Callum’s memories were still ripe, even after all these years. But then, no man walked away from watching his family and friends butchered with a whole heart or soul.

“She’s the only expert who would travel here on short notice to talk with us.”

Callum raised a dark brow. “That should tell you something.”

Angus continued as if Callum hadn’t even responded. “And despite your assumptions, she is considered the best in the field. Her published works in archeology alone would qualify her. With her interest in Celtic legends and her ability to read so many dead languages, she’s a godsend. We were lucky to catch her between projects.”

Unusual restlessness forced Callum to his feet. Even as he approached the window, he could feel worry for his cousins settling around his shoulders like a familiar cloak. Duty bound him to protect the clan at all costs, and he had fallen short of shielding them more than once.

A fine mist covered the window due to an abnormal November shower. The weather fit his mood. A burst of wind rattled around them, a sound he found oddly calming. Callum was well acquainted with the cold. For years he had lived with it in his blood, chilling his bones, freezing his soul. Each year he seemed to slip a little further into the depths of it, until he wondered if he’d ever be free. Even if they won this battle, he knew well he might have already lost the war.

Callum didn’t like Angus’s plan, but with everything he and his cousins had faced, he owed them this bit of hope. The other four were so optimistic about what their discovery could mean. And, hating to crush their expectations, he allowed it. It was naïve and desperate, but he understood why they wanted the quest to be true.

But it could be true.

Callum viciously squashed that voice in his head, the one that spun gold out of midair. As laird, he had to ignore the lure of fantasy and keep his feet planted firmly on the ground. If this dream shattered, as it had all the times before, and their lives returned to “normal,” he would handle their pain, their loss. It was his duty to look after them.

Angus’s mobile rang, breaking into Callum’s brooding thoughts. After a few short sentences and a quick laugh, Angus hung up.

“That was Fletcher. They’re on their way up.”

He shot Angus another irritated glower, and then turned to look out the window again. They wanted this expert, but that didn’t mean Callum had to be nice, especially since they were paying this woman a bloody fortune.

“Promise you’ll keep an open mind about this, Callum.”

“I said I would.” He couldn’t—wouldn’t—hide his animosity or his impatience.

“Be civil to Dr. Chilton. She’s the top of her field and was supposed to take a bit of a breather between assignments. She only returned from a dig last week.” He paused, and when he spoke next, his tone was measured and all levity had dissolved from it. “This might be our last chance.”

Pushing aside his annoyance, Callum nodded—once. Angus was right.

“I’ll be professional. By God, we’re paying the woman just to meet with us. I never promised to be civil.”