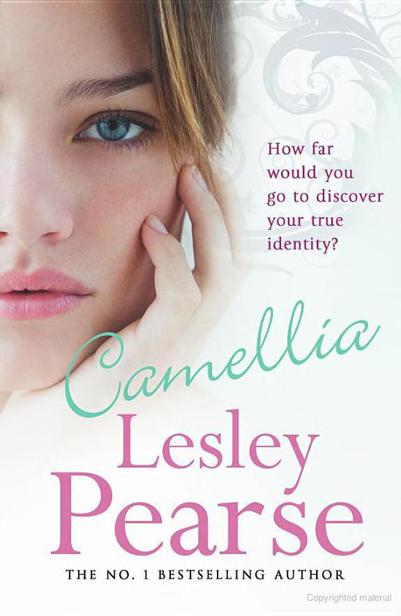 Camellia Norton is orphaned at fifteen when her mother's body is fished from a river in rural Sussex. And when she discovers a cache of letters amongst her mother's effects she realises that the past she has always been so sure of has been built on a tissue of lies. Devastated, she runs away to London, and loses herself in a metropolis that offers opportunity, temptation and danger, especially to a young girl hungry for love and acceptance. But her past won't stay buried forever, and eventually Camellia begins the long journey towards uncovering the truth about her background, and also, ultimately, about herself.

Lesley Pearse was born in Rochester, Kent, but has lived in the West Country for the last thirty-two years. She has three daughters and a grandson. She is the bestselling author of fifteen novels, including
Ellie, Georgia, Tara, Camellia
and
Charity,
all five of which are published by Arrow.

Lesley Pearse has asserted her right under the Copyright, Designs and
Patents Act 1988 to be identified as the author of this work

This novel is a work of fiction. Names and characters are the product of
the author's imagination and any resemblance to actual persons, living or
dead, is entirely coincidental

Addresses for companies within The Random House Group Limited can
be found at:
www.randomhouse.co.uk/offices.htm

'Hey mister.' A small boy tugged at the policeman's sleeve. 'There's a woman in the river!'

Sergeant Simmonds put his cup of tea on the counter of the quayside snack bar, looked down at the carroty haired boy and grinned good-naturedly. 'Swimming, boating or doing her washing?'

The boy was no older than seven, in torn shorts and a grubby tee shirt, his black gym plimsolls covered in mud, a handful of worms squirming in the bottom of a red toy bucket.

His expression was too earnest for a prank. He was out of breath and there were beads of perspiration on his little freckled nose.

'Where was this, sonny?'

'Way along there.' The boy pointed across the river, in the direction of where the rivers Tilling-ham and Breed meet and turned together towards the Rother and Rye harbour. 'I was digging up some worms to go fishing and I saw her arms.'

It was a glorious August morning, mist fast retreating with the promise of another hot, sunny day. Not yet seven, too early for holiday-makers to mar the tranquillity of the quayside, hours before day-trippers would arrive in their droves to admire the quaint old town.

Sgt Simmonds patted the boy's head. 'Go on home for your breakfast, sonny. Leave it with me. I'll check it out.'

'Maybe it's a stranded mermaid?' Alf, the snack bar's proprietor leaned forward over the counter, his swarthy, thin face breaking into a sardonic grin. 'That could be good for trade!'

'What imaginations some kids have!' Simmonds laughed, watching as the boy ran off down Wish Ward. 'Probably nothing more than a lump of driftwood. But I suppose I'd better amble round there and take a look.'

Bert Simmonds was thirty-six and easily the most popular policeman in Rye. Men admired his good humour and his prowess as a fast bowler in the local cricket team, children appreciated his friendly interest in them and the way he didn't always inform their parents about every act of naughtiness, not if he thought just a sharp telling off would do instead. As for the women, they just liked
him,
he was easy to talk to, just handsome enough with his blond hair and sea-blue eyes to set their pulses racing, but remarkably unaware of the effect he had on the opposite sex.

People were often fooled into thinking Simmonds was a soft touch because of his amiable disposition. In fact, there were few policemen in the rural areas of Kent or Sussex with as many arrests to their name, and very few with his tenacity or sharp wits.

Simmonds took his time going back along the quay and over the bridge, savouring the still cool air. Another hour or two and the High Street would be packed. He loved Rye, but it was too small a town to cope with the hordes of visitors it attracted in summer.

There was no real footpath on the other side of the river bank, just a track behind the laundry, overgrown with struggling buddleia bushes and nettles. Several times Bert had to make a detour round old sheds and climb through fences, but if he'd taken the easier route along New Winchelsea Road he might just miss whatever it was that the boy had seen.

Bert looked across the river for a moment. It was easy to see why Rye attracted so many tourists and artists. Boats moored at the quay, the tall black warehouses, then the town, almost unchanged since mediaeval times, rising behind them. Tiny houses clung precariously to the walled hillside, a pretty hotchpotch of terracotta-coloured tiles and white weatherboarding, interspersed with patches of sugared almond blue, pink and green, and above them all the square grey tower of the church.

Bert walked on, smiling as he remembered other 'bodies' that had been reported to him in the past. One was an abandoned dressmaker's dummy, another merely a lump of wood to which some joker had attached old boots. Two very serious small boys had once informed him they'd seen a man burying a baby on the marsh. When they directed Bert to the spot it had turned out to be a dead cat. But all reports had to be checked out. There were a few boating accidents each summer and swimmers sometimes underestimated the strong current.

The tide was out now, thick glutinous mud gleaming in the early sun, the river just a thin trickle in the centre, making its way down to the sea. Ahead the marsh went on almost to infinity, broken only by the ruins of Chamber Castle and a couple of coastguards' cottages on the distant horizon. Black-faced sheep had the marsh all to themselves. The only sounds were the plaintive cries of the curlews and seagulls.

It was the seagulls which made Simmonds break into a run as he approached the sluicegates of the river Breed. Their shrieking and frenzied wheeling overhead suggested there was something in the mud, if only a drowned sheep.

But as he got closer, he saw a flash of turquoise. It lay on a high triangular mud bank, between the two rivers, brilliant against the brown mud. Four or five gulls were perched on it, pecking furiously and more were zooming down like fighter planes.

'Scram you blighters/ he yelled, hurling a stone at them. As they flew off squawking with frustration at having to leave their breakfast, Simmonds stopped short, staring in horror.

The boy was right. It was a woman. Instinctively he knew too who she was, even though she lay face down, half-submerged in mud. The curve of her hips, rounded buttocks and long slender legs gave her away immediately.

'Oh no, not you, Bonny,' he whispered, fighting against nausea. 'Not like this!'

He knew the correct procedure was to get help, before he even touched her, but he felt compelled to reach her and prevent the gulls pecking at her again. Throwing down his jacket on the bank, he lowered himself over the edge and inched forward.

In his fifteen years in the police force in Rye, this one woman had taken him through the whole spectrum of emotions. He'd admired her, desired her, and more recently despised and pitied her. As a young constable her sensual beauty had haunted his dreams.

There were cruel peck marks now on her thighs and arms, and as another gull swooped down to feast, he lunged at it.

'Clear off, you blasted scavengers! Leave her alone/ he bellowed, his feet sinking deeper into the mud.

The sound of a car stopping on the bridge by the sluicegate brought Simmonds back to his senses. As he turned his head and saw PC Higgins and Rowe clambering over the fence, he remembered that he could easily sink up to his waist in the mud without a rope.

'We had a telephone call at the station/ Higgins yelled. 'An old man out walking his dog saw something. We brought some waders just in case. Any idea who it is?'

'It's Bonny Norton/ Simmonds called back, struggling to regain his footing and his composure. 'We must get her out before a crowd gathers. Get the waders on and bring some rope and boards.'

It was obscene to haul out such a beautiful woman by her feet. The body which so many men had lusted after was revealed intimately as her dress was sucked back by the mud. Her lace panties were turned a filthy brown from the river, her golden skin smeared with muck. But as they turned her over on reaching firmer ground, one breast broke free from her bodice, pure white, pink tipped, small and perfect. All three men averted their eyes in embarrassment.

Higgins moved first, covering her with a blanket. 'What the hell was she doing by the river?' he said gruffly.

Rowe shrugged his shoulders. He was several years younger than his colleagues, a dour insensitive man who hadn't been in Rye long enough to have known Bonny in the old days. 'Drunk as usual, I expect.'

Blood Zero Sky by Gates, J.
Deception (Dirty Secrets #2) by Mercy Amare
Low Road by Eddie B. Allen, Jr.
Once and for All by Jeannie Watt
Break of Dawn by Chris Marie Green
Darkened Blade: A Fallen Blade Novel by Kelly McCullough
The Dog With the Old Soul by Jennifer Basye Sander
Bound by Shannon Mayer
The Empty Glass by Baker, J.I.
Life Sentences by Alice Blanchard
Our partner