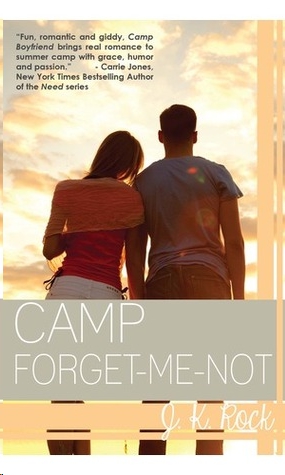 Sale of the paperback edition of this book without its cover is unauthorized.

This book is a work of fiction. Names, characters, places, and incidents are products of the author’s imagination or are used fictitiously. Any resemblance to actual events, locales, or persons, living or dead, is entirely coincidental.

Summary: popular girl starts feeling alone, even in a crowd, and finds love at camp with a newly returned friend who isn’t shy guy he used to be.

Cover design by K. Kaynak, based on a design by Jennifer Rush

From Joanne:
To Jane Austen, for inspiring this story. And to Karen, whose love of YA has given me a whole new world of words to read, share, and write. Cheers to you for your big, broad vision and the courage to see it through. High fives!

From Karen:
To Joanne—my amazing sister-in-law, writing partner and dearest friend. You believed in me before I trusted in myself, helped me realize dreams I was too afraid to imagine, and saw an incredible future that included the magic of US. Thank you for this unforgettable journey. You made me bloom.

Emily (Counselor):
“I stand for freedom of expression, doing what you believe in, and going after your dreams.”—Madonna

Alex:
“Above all, be the heroine of your life, not the victim.”—Nora Ephron

Trinity:
“Everything you can imagine is real.”—Pablo Picasso

Piper:
“The earth does not belong to us. We belong to the earth.”— Chief Seattle

Siobhan:
“The measure of intelligence is the ability to change.”—Albert Einstein

Jackie:
“Better to be strong than pretty and useless.”—Lilith Saintcrow,
Strange Angels

Yasmine:
“When you know better, you do better.”—Maya Angelou

Victoria (Counselor):
“I love sleep. My life has the tendency to fall apart when I’m awake, you know?”—Ernest Hemingway

Hannah:
“Be yourself; everyone else is already taken.”—Oscar Wilde

Brittany:
“Twilight, again. Another ending. No matter how perfect the day is, it always has to end.”—Stephenie Meyer,
Twilight

Nia:
“Look forward, not backward. Be a leader, not a follower.”—Alexander Lockhart

Kayla:
“A girl should be two things: who and what she wants.”—Coco Chanel

Bruce (Counselor):
“We are only as strong as we are united, as weak as we are divided.”— J.K. Rowling,
Harry Potter and the Goblet of Fire

Rafael:
“Daring ideas are like chessmen moved forward. They may be beaten, but they may start a winning game.”—Johann Wolfgang von Goethe

Danny:
“I have to face the fear. I have to take control of the situation and find a way to make it less frightening.”—Veronica Roth,
Divergent

Garrett:
“So you’re a little weird? Work it! A little different? OWN it! Better to be a nerd than one of the herd!”—Mandy Hale

Rob (Counselor):
“I’m sorry that good-looking people like us made you throw up and feel bad about yourself.”—Derek Zoolander

Nick:
“Adversity causes some men to break; others to break records.”—William Arthur Ward

Eli:
“Everything is funny as long as it is happening to somebody else.”—Will Rogers

Devon:
“Bicycles are almost as good as guitars for meeting girls.”—Bob Weir

Cameron:
“Be believing, be happy, don’t get discouraged. Things will work out.”—Gordon B. Hinckley

Buster:
“There are no losers in wrestling, just winners and learners.”—Unknown

Mr. Woodrow (Gollum):
“We wants it, we needs it. Must have the Precious.”—J.R.R. Tolkien,
The Lord of the Rings

Holding my breath underwater, I peered through gray-blue murkiness at my cabin mates’ kicking legs. Despite my depth, their muted words found me when I’d hoped to leave my problems on Lake Juniper’s surface. This was my last day at camp, and I didn’t want Nick Desanti drama. I had enough other problems waiting for me at home.

“Until Kayla broke his heart.” Brittany dodged Rachel’s kick. “What? It’s true. Everyone knows he left because she totally dissed him.”

I cringed at my name and that bad memory. It was the biggest regret of my life. Well, that and the bangs I gave myself before my fifth grade school picture.

I tucked my knee into my chest and turned over in a slow roll, lungs burning. For a second I emerged behind them, gulped air, then sank again before they, or Nick, noticed. The only good thing about Mom losing her job and not being able to afford the last half of camp was that I wouldn’t face Nick anymore. Since his arrival last week, he’d acted like I either didn’t exist or reeked.

“Kayla?” Brooke’s shrill voice knifed right through the water. “But she’s so—you know. Forgettable. One of you guys should have hooked up with him.”

Forgettable? Who’d remember YouTube It-Girl Brooke White after her fifteen minutes of fame ended? I wished I dared to say that, but her “fans” and our friends might turn against me.

“He was different then.” Rachel’s no-nonsense voice found me like a heat-seeking missile. “Barely noticeable.”

I snorted a water bubble at Brittany’s joke about our camp director, then clapped a hand over my mouth. If I held my breath for a couple more seconds, Nick would swim past us. As a diver on my school’s swim team, I could ignore the fire scalding my lungs. Plus, it didn’t hurt as much as his rejection.

“So he’s rich, famous, and gorgeous.” Brooke’s long legs crossed genie style while her arms twisted her back and forth in the water. “Like me. As of last week, I had three hundred thousand subscribers and more than fifty million views for ‘So Not Into You.’” She hummed a few bars of her home-recorded YouTube song. Another bonus for leaving camp…I wouldn’t hear her song for the millionth time. Or the crazy lyrics she came up with for her next “hit.”

I nodded involuntarily. Nick
was
perfect—except for the tiny problem that we used to be close and now he hated my guts. I should have objected when my friends signed us up for swim today with his cabin, the Warriors’ Warden. But I’d been afraid they’d leave me behind. Alone. I was all too used to that back home.

“Totally perfect.” The water almost vibrated with the force of Brittany’s sigh. “But seriously, he wasn’t always Diva-worthy. That’s why Kayla dropped him when she joined our cabin.”

A bubble escaped as I growled in frustration. My reasons went deeper than that…but I guess they wouldn’t know.

“Where is Kayla?” Rachel’s voice rose.

I shot to the surface and sucked in a long breath. So much for the underwater hiding spot I’d ducked into when Nick flashed by in his swim lane. So far, I’d mostly stayed off his radar, and I meant to keep it that way until I left tomorrow. We had too much history to start another chapter.

“We were looking for you.” Rachel lifted her swim goggles and frowned down at me with light brown eyes that matched her springing, shoulder-length curls. “You scared the crap out of us.”

“Sorry.” I swiped my hair off my face and swirled in the cool water so that my back faced the returning guys. My pale shoulders crisped under the bright sun. “Didn’t think you’d notice.”

Brittany patted my hand on the floating rope, her eyes a light blue without her vampire contacts. “We’d probably notice if you were dead.”

“Ya think?” Rachel hoisted her sleek, Speedo-clad body onto the swim platform. “I thought you only had eyes for Nick, Britt.”

My heartbeat tripped over itself at his name. Despite the splashing, churning water around us, the catcalls and whistle-blowing, it was all I heard. Reason three for needing to leave camp: it sucked being around an ex that I still liked. Especially now that everyone else liked him, too.

“Nick!” cough/hacked Brooke, and we all froze. I swear, even the dripping water suspended in midair.

“What’s up? Everything okay?” rumbled a deep voice that was as familiar as it was different. “Everyone accounted for?”

I felt his eyes slide over me before he lifted the lane separator and joined us. Nick Desanti. Even when we’d been no more than hiking partners before we became best friends and nearly more, I’d always been super-aware of him. I met his hazel gaze for a split second, the vivid color contrasting against his dark Italian skin and black-brown hair.

“Nothing to see. Let’s move along, folks,” I muttered under my breath and reached for the platform. Strong hands spanned my waist and lifted me onto the worn wood.

I turned around to object, even though his touch sent heat streaking through me, but I closed my mouth at the sight of Nick’s back. Kayla dismissed. It hurt more than the splinter digging into my big toe. The quick boost was no more than he’d do for anyone. And that’s all I was to Nick now. Anyone. Or worse…no one.

“Ohhhhh, lift me next, Nick. You’re so strong!” Brooke wriggled her bikini-clad behind like a dog in heat, her purple-tipped black hair swishing in the water. Would I be justified in calling her a bitch? It was the right term, but
I
could never say that out loud. I was the girl who never spoke her mind…except in her mind.

A loud squeal sounded in the humid, mid-July air as Nick tossed first Brooke, then Brittany at Rachel and me, toppling us like bowling pins. From the shore, a whistle shrilled. Gollum. We’d nicknamed our camp director, Mr. Woodrow, after the
Lord of the Rings
creature for a whistle obsession so intense we called it his Precious. He waved his arms at us and our oblivious counselor, Victoria. Despite dripping around her like a rainstorm, we didn’t cause her to look up from her magazine.