Camp Wacko: The Drones of Summer 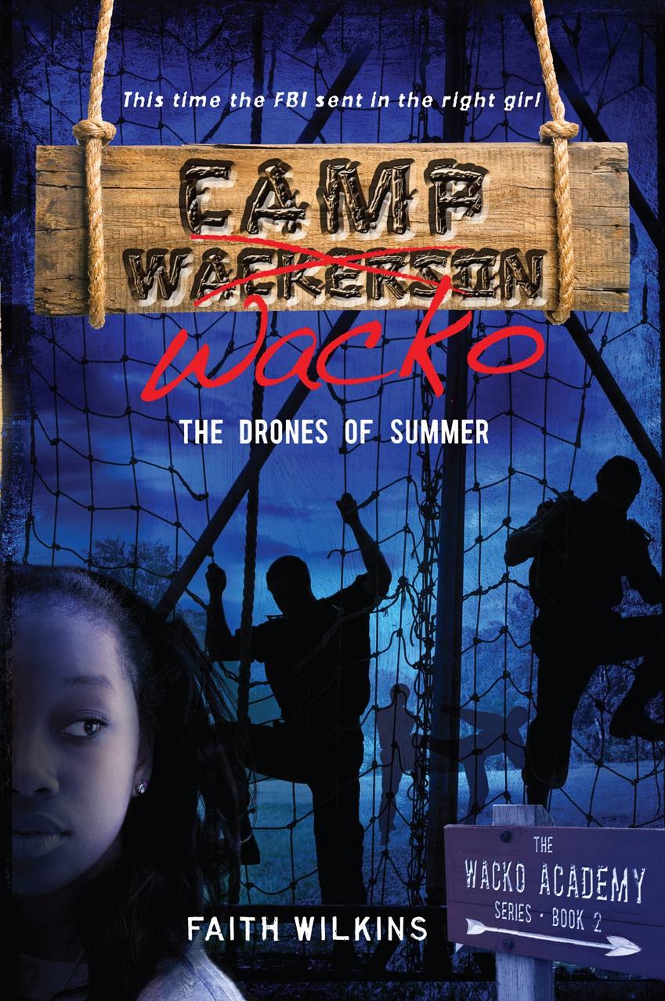 “I’m hooked on Wilkins. I’m so excited for this young lady to keep writing! I imagine Wilkins to be the next Octavia Butler, and that her work now will inspire the next Faith Wilkins.”

“Imaginative, unique and impossible to put down,
Wacko Academy
by Faith Wilkins is a story not-to-be-missed by young readers as well as adults. Faith Wilkins displays an excellent and incredible talent for weaving a story which flows smoothly and vividly draws the reader in. Her writing voice is one of maturity, yet age appropriate to draw Middle Grade readers in with the slang and vices of that age group. Wacko Academy is the perfect book to grab for even the most reluctant readers. There is mystery, intrigue, humor and a tinge of romance all rolled into one excellent book that both boys and girls will be hooked on!”

For my mother, grandparents, and all who have supported me in my writing and dreams for the future. I love you dearly, and I am very blessed to have friends and family like you.

This is a work of fiction. All of the characters, organizations and events portrayed in this novel are either products of the author’s imagination or are used fictitiously.

CAMP WACKO: THE DRONES OF SUMMER

Trouble With a Capital T

Not Your Ordinary Date

Beginning of the End

THE SUN HAD just started to set. Shining bright in between the trees, the rays made the rich green leaves appear lighter in color. Buds hanging from their stems were beginning to blossom into flowers in beautiful shades of pink, purple, and blue. A slight breeze rustled the leaves, creating a soft swishing sound. Other than that, the earth was still, as if it knew what it had lost and wished to pay its respects as well.

I closed my eyes for a moment, letting the wind dry the single tear that had escaped down my cheek. Someone squeezed my hand, hard. I opened my eyes to meet my mother’s gaze. She smiled sadly, understanding plain on her face. Her own eyes were shining with unshed tears, even though she hadn’t known the deceased as well as I did.

The deceased. It was weird to think of her that way. Her name was Cameron. She had been my friend. I had found her at the most unlikely place to find a friend, Wackerson Academy. Or, as I liked to call it, Wacko
Academy. A school I had been forced to attend after being kidnapped by its crazy headmaster and his son, Dustin. It was a wild ride, trust me, but we had all gotten out safely. We had escaped the school’s grasp. Or so we had thought.

I raised my head to look at the other attendees of the ceremony. The family stood across from us at the head of the casket.

When the preacher finished his somber sermon and they had begun to lower the casket into the ground, she clutched her husband’s arm like a lifeline. Cameron’s brother, tall, thin, and pale, helped to shovel in the dirt on top of the dark mahogany casket. He paused to wipe sweat from his brow, taking a shaky breath before continuing his task.

Focusing instead on the picture of Cameron as a happy little girl behind them, I wondered just what had gone wrong. After months of surgery and careful monitoring, Cam had seemed to be responding well. She had even awakened once or twice when I had visited her. Although she was still frail, she was beginning to look and act more like herself. Then things took a turn for the worse. Nearly twelve months after we had rushed her to the hospital, she passed away. Her fifteenth birthday had been only a few weeks before.

When the casket was finally in the ground, we slowly began to trickle out of the cemetery until her family members were the only ones left standing where she now rested. My mother approached her mom, placing a gentle hand on her shoulder.

“I’m so very sorry for your loss,” she said softly. Thanking her, Mrs. Greene let go of her husband to embrace my mom. They had gotten to know each other over the many times I had visited Cameron at the hospital. I took this time to hug her dad and her brother.

“Cameron was an amazing girl,” I told them, forcing a smile.

Her father gazed at me with sad chocolate-brown eyes. “I know. Thank you for coming.” I noticed that his once salt-and-pepper hair was now completely gray, his forehead creased with worry lines.

Cameron’s brother simply nodded his agreement, staring at the mound of dirt in front of us.

While my mother continued to talk with the family, I wandered farther off into the cemetery. It was such a sad yet beautiful place, the final resting spot for those who had passed on and wouldn’t be returning.

I had just begun to read a glossy black gravestone when something caught my eye. A flash of golden brown skin, dark curly hair. When I blinked, there was nothing. Confused, I turned in a complete circle, searching for whatever had caught my eye. I frowned when again I came up with nothing. Well, that was weird. If I didn’t know any better, I would have thought—

I turned to find myself facing a tall man in a black suit wearing dark sunglasses. His thin lips were set in a straight line, like he didn’t really want to be there. His light brown hair had been slicked back. Not the best look for him, in my opinion.

The ends of his mouth twisted up into what was supposed to be a smile. “Agent Cooper. Federal Bureau of Investigation.

I nodded, waiting for him to go on. Already, I didn’t really like this guy very much.

“Good. Nice to know they’re teaching you kids something useful. What are you now, fourteen?”

I clenched my teeth. “Fifteen.”

The agent shrugged, indicating his indifference. “Anyway, we have been watching you for quite some time, Miss Mason, and we think you can help us with something.”

My eyes narrowed. “I’m not sure there’s anything
I
would be able to help you with.”

The man attempted to smile again. “Oh, but there is.” Hands clasped behind his back, he began to walk. Reluctantly, I followed.

“First of all, we know you lied to the police. That story about your foggy recollections of who kidnapped you wasn’t entirely true, was it?”

Refusing to meet his gaze, I kept my expression blank.

“You have no proof of that.”

He chuckled and stopped in his tracks, staring at me until I was forced to look up. Behind those shades, his eyes were impenetrable. “Last year, you had a new little friend. A few months after you made this friend, you disappeared, only to pop up again at a hospital with terribly disfigured children. Funny thing. Your new friend conveniently went missing during all of this, never to be heard from again.

Another funny thing. After a little digging, we found that a person matching his description has been to many different schools, but with a different name each time. And soon after he arrived, someone went missing. Usually a child. Would you happen to know anything about this?”

I crossed my arms against my chest, unimpressed. “Not in the slightest.”

Hearts On Fire by Childs, Penny
Game Over by Fern Michaels
The Day Our Teacher Went Mad and Other Naughty Stories for Good Boys and Girls by Christopher Milne
Zen's Chinese Heritage: The Masters and Their Teachings by Andy Ferguson
Whipped) by Karpov Kinrade
Need Me - Being Trevor's Toy by Charlotte DeCorte
Dirty Dare: The Rescue (Sexy Suspense) (Part 1, spin-off to the Dirty and Dare Me series) by Leto, Julie
Younger by Suzanne Munshower
Miracle Man by William R. Leibowitz
Disappearing Acts by Byars, Betsy
Our partner