Read Can You Keep a Secret? Online

Can You Keep a Secret? 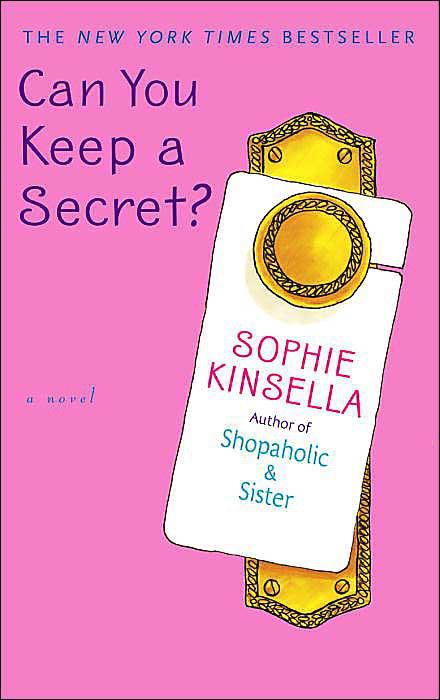 THE SECRET DREAMWORLD OF A SHOPAHOLIC

Can You Keep
A Secret?
Sophie Kinsella

To H, from whom I have no secrets.
Well, not many, anyway.

A big thank you to Mark Hedley, Jenny Bond, Rosie Andrews and Olivia Heywood for all their generous advice. And hugest gratitude as always to Linda Evans, Patrick Plonkington-Smythe, Araminta Whitley and Celia Hayley, my boys and the board.

Of course I have secrets.

Of course I do. Everyone has a secret. It's completely normal. I'm sure I don't have any more than anybody else.

Like for example, here are a few random secrets of mine, off the top of my head:

2. I love sweet sherry, the least cool drink in the universe.

3. I have no idea what NATO stands for. Or even what it is.

4. I weigh 9 stone 3. Not 8 stone 3, like my boyfriend Connor thinks. (Although in my defence, I was planning to go on a diet when I told him that. And to be fair, it is only one number different.)

5. I've always thought Connor looks a bit like Ken. As in Barbie and Ken.

6. Sometimes, when we're right in the middle of passionate sex, I suddenly want to laugh.

7. I lost my virginity in the spare bedroom with Danny Nussbaum, while Mum and Dad were downstairs watching
Ben Hur
.

8. I've already drunk the wine that Dad told me to lay down for twenty years.

9. Sammy the goldfish at home isn't the same goldfish that Mum and Dad gave me to look after when they went to Egypt.

10. When my colleague Artemis really annoys me, I feed her plant orange juice. (Which is pretty much every day.)

11. I once had this weird lesbian dream about my flatmate Lissy.

13. I've always had this deep down conviction that I'm not like everybody else, and there's an amazingly exciting new life waiting for me just around the corner.

14. I have no idea what this guy in the grey suit is going on about.

15. Plus I've already forgotten his name.

And I only met him ten minutes ago.

'We believe in logistical formative alliances,' he's saying in a nasal, droning voice, 'both above and below the line.'

'Absolutely!' I reply brightly, as though to say: Doesn't everybody?

Logistical. What does that mean, again?

Oh God. What if they ask me?

Don't be stupid, Emma. They won't suddenly demand, 'What does logistical mean?' I'm a fellow marketing professional, aren't I? Obviously I know these things.

And anyway, if they mention it again I'll change the subject. Or I'll say I'm post-logistical or something.

The important thing is to keep confident and businesslike. I can do this. This is my big chance and I'm not going to screw it up.

I'm sitting in the offices of Glen Oil's headquarters in Glasgow, and as I glance at my reflection in the window, I look just like a top businesswoman. My hair is straightened, I'm wearing discreet earrings like they tell you to in How-to-win-that-job articles, and I've got on my smart new Jigsaw suit. (At least, it's practically new. I got it from the Cancer Research shop and sewed on a button to replace the missing one, and you can hardly tell.)

I'm here representing the Panther Corporation, which is where I work. The meeting is to finalize a promotional arrangement between the new cranberry-flavoured Panther Prime sports drink and Glen Oil, and I flew up this morning from London, especially. (The company paid, and everything!)

When I arrived, the Glen Oil marketing guys started on this long, show-offy 'who's-travelled-the-most?' conversation about airmiles and the red-eye to Washington – and I think I bluffed pretty convincingly. (Except when I said I'd flown Concorde to Ottawa, and it turns out Concorde doesn't go to Ottawa.) But the truth is, this is the first time I've ever had to travel for a deal.

OK. The
real
truth is, this is the first deal I've ever done, full stop. I've been at the Panther Corporation for eleven months as a marketing assistant, and until now all I've been allowed to do is type out copy, arrange meetings for other people, get the sandwiches and pick up my boss's dry-cleaning.

So this is kind of my big break. And I've got this secret little hope that if I do this well, maybe I'll get promoted. The ad for my job said 'possibility of promotion after a year', and on Monday I'm having my yearly appraisal meeting with my boss, Paul. I looked up 'Appraisals' in the staff induction book, and it said they are 'an ideal opportunity to discuss possibilities for career advancement'.

Career advancement! At the thought, I feel a familiar stab of longing in my chest. It would just show Dad I'm not a complete loser. And Mum. And Kerry. If I could go home and casually say, 'By the way, I've been promoted to Marketing Executive.'

As long as everything goes well today. Paul said the deal was done and dusted and all I had to do was nod and shake their hands, and even I should be able to manage that. And so far, I reckon it's going really well.

OK, so I don't understand about 90 per cent of what they're saying. But then I didn't understand much of my GCSE French Oral either, and I still got a B.

The man in the grey suit is still droning on about something or other. As casually as possible, I extend my hand and inch his business card towards me so I can read it.

Doug Hamilton. That's right. OK, I can remember this. Doug. Dug. Easy. I'll picture a shovel. Together with a
ham
. Which … which looks
ill
… and …

OK, forget this. I'll just write it down.

I write down 'rebranding' and 'Doug Hamilton' on my notepad and give an awkward little wriggle. God, my knickers really are uncomfortable. I mean, G-strings are never that comfortable at the best of times, in my opinion, but these are particularly bad. Which could be because they're two sizes too small.

Which could possibly be because Connor bought them for me, and told the lingerie assistant I weighed eight stone three. Whereupon she told him I must be size eight. Size eight!

(Frankly, I think she was just being mean. She
must
have known I was fibbing.)

So it's Christmas Eve, and we're exchanging presents, and I unwrap this pair of gorgeous pale pink silk knickers. Size eight. And I basically have two options.

A: Confess the truth: 'Actually these are too small, I'm more of a 12, and by the way, I don't really weigh eight stone three.' Or …

B: Shoe-horn myself into them.

Actually, it was fine. You could hardly see the red lines on my skin afterwards. And all it meant was that I had to quickly cut all the labels out of my clothes so Connor would never realize.

Since then, I've hardly ever worn this particular set of underwear, needless to say. But every so often I see them looking all nice and expensive in the drawer and think, Oh come on, they can't be
that
tight, and somehow squeeze into them. Which is what I did this morning. I even decided I must have lost weight, because they didn't feel too bad.

I am such a deluded moron.

Up to now I've just been sitting and nodding, thinking this business meeting lark is really easy. But now Doug Hamilton's voice starts to impinge on my consciousness. What's he saying?

'We appreciate the functional and synergetic partnership that Panther and Glen Oil have enjoyed in the past,' Doug Hamilton is saying. 'But you'll agree that clearly we're going in different directions.'

Is
that
what he's been talking about all this time?

My stomach gives an anxious lurch.

Is he trying to pull out of the deal?

'Excuse me, Doug,' I say, in my most relaxed voice. 'Obviously I was closely following what you were saying earlier.' I give a friendly, we're-all-professionals-together smile. 'But if you could just … um, recap the situation for all our benefits …'

In plain English, I beg silently.

Doug Hamilton and the other guy exchange glances.

'My brand values?' I echo in panic.

'The brand values of the
product
,' he says, giving me an odd look. 'As I've been explaining, we here at Glen Oil are going through a rebranding process at the moment, and we see our new image very much as a
caring
petrol, as our new daffodil logo demonstrates. And we feel Panther Prime, with its emphasis on sport and competition, is simply too aggressive.'

This makes no sense. Glen Oil is fume-making, world-ruining petrol. Panther Prime is an innocent cranberry-flavoured drink. How can it be too aggressive?

'The values it espouses.' He gestures to the marketing brochures on the table. 'Drive. Elitism. Masculinity. The very slogan, "Don't Pause". Frankly, it seems a little dated.' He shrugs. 'We just don't think a joint initiative will be possible.'

No. No. This can't be happening. He can't be pulling out.

Everyone at the office will think it was my fault. They'll think I cocked it up and I'm completely crap.

My heart is thumping. My face is hot. I can't let this happen. But what do I say? I haven't prepared anything. Paul said it was all set up and all I had to do was shake their hands.

'We'll certainly discuss it again before we make a decision,' Doug's saying. He gives me a brief smile. 'And as I say, we would like to continue links with the Panther Corporation, so this has been a useful meeting in any case.'

He's pushing back his chair.

Close
the deal. That's what I meant.

What am I talking about? I have no points to make.

There's a can of Panther Prime sitting on the desk, and I grab it for inspiration. Playing for time, I stand up, walk to the centre of the room and raise the can high into the air where we can all see it.

'Panther Prime is … a sports drink.'

I stop, and there's a polite silence. My face is prickling.

Oh God. What am I doing?

'Since the launch of Panther Cola in the late 1980s, Panther drinks have been a byword for energy, excitement and excellence,' I say fluently.

Thank God. This is the standard marketing blurb for Panther Cola. I've typed it out so many zillions of times, I could recite it in my sleep.

'Panther drinks are a marketing phenomenon,' I continue. 'The Panther character is one of the most widely recognized in the world, while the classic slogan "Don't Pause" has made it into dictionaries. We are now offering Glen Oil an exclusive opportunity to join with this premium, world-famous brand.'

My confidence growing, I start to stride around the room, gesturing with the can.

I'm flying! I'm fantastic! If Paul could see me now, he'd give me a promotion on the spot!

I come over to the desk and look Doug Hamilton right in the eye. 'When the Panther consumer opens that can, he is making a choice which tells the world who he is. I'm asking Glen Oil to make the same choice.'