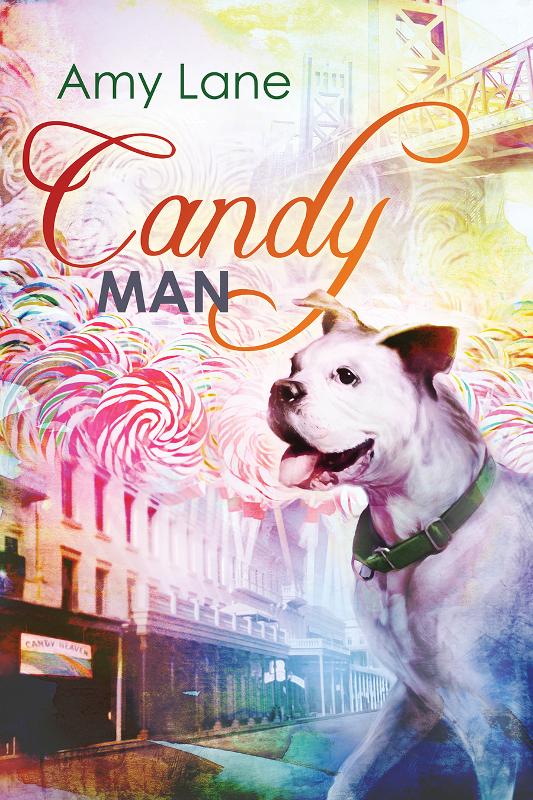 I will never write a book not dedicated to Mate in some way. And Mary. And, in this case, Chicken, Zoomboy, Squish, and Big T, who were the whole reason I stopped into Candy Heaven in the first place.

Mate was running a half marathon, and I was running back-up support. So he ran his fit, lithe body thirteen miles, and I hauled my lumbering, fat butt for what amounted to a 5K, back and forth from Raley Field to Old Sacramento. After Mate came in, we walked the (final!) trip back through Old Sacramento, and in the nest of shops on the old boarded walkway, we saw Candy Heaven—and went in. Hey, it was the day before St. Patrick’s Day, and we didn’t have anything for the little kids to wake up to. Convenience and desperation drive discovery. Anyway, Darrin, the proprietor, was funny, kind, and 6’6” tall. He was also fabulous in a very rainbow/tie-dye sort of way. Maybe it was that I was breathless, sweaty, and felt stupid, because, hello, Mate was the one running the marathon, but I
so
needed a Darrin right then. I determined that this year’s Christmas novella would be about Candy Heaven and have Darrin in it. So if you’re ever in Old Sacramento, look Candy Heaven and Darrin up. His shop is the one right across the river by the parking structure on the corner—you can see the bridge and Raley Field from the front. Meet the real-life Darrin and his crew of mismatched, wonderful, happy workers inside. Don’t forget to take a free candy—the blue labels are for tasting. ;-)

D
ARRIN
CHECKED
his manicure and tossed his shoulder-length shag-cut hair back, shaking his head so it came clear of the dangly earrings. Yeah, it was a little grayer when he forgot to do highlights, but he still managed to look glamorous. Feeling cocky, and damned good about the coming Christmas season, he leaned forward against the high wooden counter and watched as Joni unlocked the doors.

“Think it’s going to be busy, boss?” Joni had a buzz cut, dyed black, and a body as stocky as one of the barrels that held hard-candy sweets throughout the store.

“I hope so!” Small businesses in this climate weren’t always a sure thing, but Candy Heaven had been around for a few years, and Darrin was clinging to his little store with every bit of strength in his long, manicured fingers. The store resided in Old Town Sacramento—a four-by-two block cobblestoned, boardwalked tourist trap formed in the pocket created by Highway 275, the Golden State Highway, the I Street Bridge, and the Sacramento River. The stores ranged from burger joints to fine-dining restaurants to antiques to importers to art galleries. They made their money from tourists looking for a quick bit of history at the railroad museum, and locals looking for a reliable place to get something specialized and unique. The candy stores—his wasn’t the only one—were a sweet little perk and part of the area’s appeal. They should do a brisk Christmas business, and Darrin thought about his crew of twelve or so employees and reflected that they might be down one for the holidays.

“In fact,” he said thoughtfully, “I think we may need to hire some help.”

Joni grunted. “I’ll put out the sign, then. God, I hope we don’t get high school students and shit. I
hate
premetacognitive beings.”

Joni was twenty-four and working on her master’s in sociology. Darrin was waiting for her to get old enough to think “premetacognitive beings” were adorable and pat them on the head and send them on their way with a cookie. Right now she was sort of abrasive—although that could have had something to do with her recent breakup. Joni’s ex-girlfriend had been barely nineteen.

Darrin ripped the top off a Pixy Stix and dumped the contents on the counter, then drew a random picture in the sour sugar and imagined who would work for him. Six four, chest like a wall, heavy tattoos on his back and neck. Bold nose, rectangular jaw, brown eyes, flat and untrusting. A heart like… quicksilver—used to defending itself by pretending it wasn’t there.

“No, dear,” Darrin said, too intent on the man he saw in the Pixy Stix to be tactful. He saw a child huddled under a bed in the dark, the whip and slap of unkind voices echoing above his sanctuary. He saw a shining lifeline. Oh dear. And the lifeline led here.

More bitter than it should be.

“This one needs us. Needs sweetening.”

Joni groaned. “Boss, can’t we have, you know, a wide-eyed kinda hamster girl, smart enough to not be premetacognitive, dumb enough to want me?”

Darrin pulled himself away from his visions of sugar-humans and scowled. “
You
need to find someone who doesn’t take your shit. You drove that sweet young thang away sure as I’m standing here. Forget cute with perky boobies. You need someone who will throw you against the counter, kiss you, and then tell you to stop being a bitch!”

Joni grunted and set the Help Wanted sign up in the window. “Can she have perky boobies too?”

“I am
not
doing a reading for you! Now start stocking—we need more of the magnets with my picture on them. There’s going to be a run.”

Joni rolled her eyes and went to do her job, and Darrin sighed and started to pick up his end. Sometimes it sucked being the boss.

A
DAM
M
ACIAS
looked at the smoking hulk of his engine and slammed the hood down.
Oh, for fuck’s sake.
The Chevy Matiz—whose idea was it? Four doors, shaped like a shoe, and all the reliability of his grandmother’s digestive tract. Whether she’d been constipated or had the runs, it was always ugly, and her mood had been to match.

And now, unlike his grandmother (dammit!), this damned car had apparently shuffled off its mortal coil.

He fought the temptation to bury his head in his hands and scream.

He kicked the car’s tire instead. “Fuck-burger, shit-eating, rancid piece of dog cock!”

It wasn’t going to make it.

And now he had no fucking car.

What he did have—the
one
thing he did have—was an offer from his cousin, Rico, to let Adam house-sit his apartment off of F Street, in downtown Sacramento. Rico said straight up it wasn’t a great apartment, but it was rent controlled, and Rico didn’t want to lose it when he went to serve an internship at a firm in New York.

Rico also needed someone to walk his dog, feed his cat, and keep his fish alive—all of which he was willing to front Adam rent to do, but Adam had to
get there
first
.

Which he could not do with his car in its current condition.

He kicked the tire again and then grabbed his shit. He’d served in the military for eight years. He knew when to fish, when to cut bait, and when to ditch his car off at a U-Pick-It and buy a bus ticket out of Southeast of Hell.

U-P
ICK
-I
T
PAID
him $200 for the car, and Adam thought that the girl behind the counter was being generous because she was trying to land him for a date. When he told her that he had to get to Sac by the next morning, she shrugged philosophically and directed him to the nearest bus station, and he was grateful enough to smile.

God, he was pretty sure her panties flooded just from a smile, and he really wished he could take her up on it, but he was done thinking he could do that anymore. He took the $200, grabbed his duffel bag and his suitcase, and bought himself that bus ticket out of town.

There would be no more flirting with girls for him.

Well, the last guy really
had
been his friend, and Adam had been willing to come out of the closet so they could have a relationship, but Robbie hadn’t. The resultant mess had been, well, less than stellar for Adam’s career, and he’d taken the opportunity to not re-up when the time came.

He was going to use those benefits and go to
school
, right?

Except the one car he could afford had been that
thing
that had just died on him for the last time, and now he was on a bus with no heater the week before Thanksgiving, freezing his ass off on the way to free room and a little board.

God. And the guy next to him was looking… interested, to say the least.

“Hey, kid,” the old man muttered, trying to talk under his breath. “You, uhm, feelin’ lonely?” He accompanied that thought with a hand gliding roughly down Adam’s thigh.

Adam lifted it firmly off. “Not that lonely,” he growled. His phone buzzed in his pocket.

He picked it up, saw the text, and groaned.

My plane takes off tomorrow. Where are you?

Car died permanently. On the bus for Sac.

Fine. Key under the mat, am writing out instructions. Cat needs medicine twice daily. The dog may fucking eat you.

Adam fought a burning behind his eyes. God, he’d expected Rico to totally cancel on him. The two of them had spent long hours at Grandma’s while their mothers both worked, and the bond had lasted through Adam’s stint in the military and Rico’s college years. When Adam had come out and Grandma and his mother had (thank God!) stopped talking to him, Rico had been the first person to text him—almost before the old bitch had slammed the door in his face.

High five! You know between the gay thing and the soldier thing, you may possibly have become cool.

And now Rico was Adam’s last possible hope for reclaiming some sort of order from the crapfest his life had become.

He felt something crawling on his thigh again and, in a fit of irritation, swung around in his seat and pinned the old man against the headrest by the throat.

“Now listen, old man,” Adam growled, “I may be fucking queer, but I am
not
up for grabs, do you hear me? You keep your hands to yourself and—” He held on to his gag reflex as the man expelled a gasp of fetid breath over greenish teeth. “—and breathe through your fucking nose, and you may live to see Sacramento, okay?”

Adam let go of him and threw himself back in his seat. Oh fuck. It was like looking through a time machine, because sweartagod, if he stopped trying and started drinking Ripple, that old man was going to be him.

When the old man crumpled into a tearful,
non
predatory heap next to him, Adam picked up his phone and texted with the last of his battery.

Thanks cousin. I owe you. I SO need to get my shit together.

You got your shit together, A—just need a little help. Keep my babies alive and don’t wreck my car. We’re square.

No. Not square. But Adam wasn’t going to waste this opportunity. He wanted a job, he wanted to get back in school, and he wanted to find his own place before June. Friends? Lovers? Pets? Need not apply.

The bus pulled into Sacramento just as the sun was rising, and for a minute, as the bus approached from the south, the city was backlit by the brilliant, thin gold of winter. The unimpressive skyline suddenly held character and charm, and the surrounding acres of flatlands and suburbs exuded a possibility that Adam wouldn’t have given the place credit for eight hours earlier.