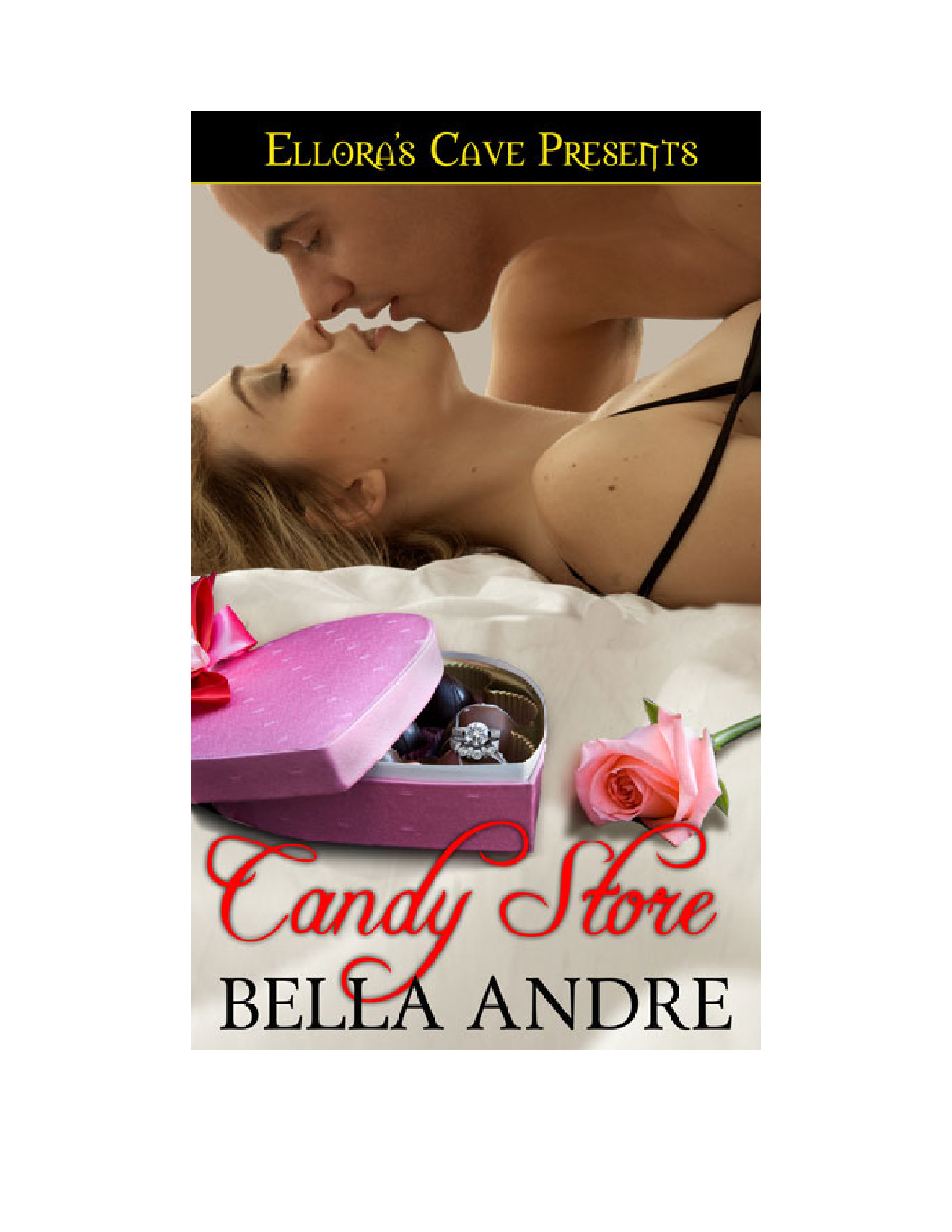 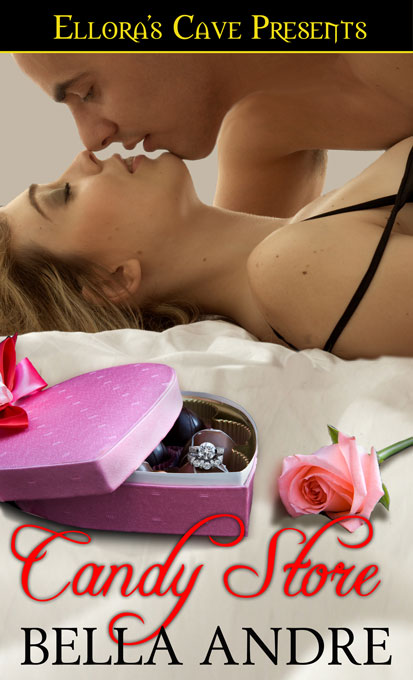 The orgasmic moans coming from behind Callie were too loud and impassioned for her to ignore any longer.

“Ooohh, I just died and went to heaven,” exclaimed a middle-aged woman as she popped another truffle into her mouth. The teenager next to her said, “Stop hogging them all, mom,” and reached across her mother to grab several treats off the tray the waiter was holding.

Callie smiled, pleased that everyone was enjoying the truffles so much, but then her smile turned into a frown as she remembered her accountant’s words.
Your business
better start picking up, and fast, or you’re going to have to shut down Callie’s Candies.
Callie slumped down in her seat with a loud sigh. Her store wasn’t bringing in enough money to stay afloat. Even though everyone who had ever tasted one of her confections seemed to love them, Callie still wasn’t able to make ends meet. Her accountant had arranged for her to meet with a renowned candy company consultant on Monday, but right now Callie wasn’t feeling particularly hopeful about it. As soon as anyone started talking about marketing and promotion, Callie always started daydreaming about new candy creations, no matter how hard she tried to stay focused on business plans.

She looked around the indoor garden at the two hundred people who were munching on her truffles with looks of utter rapture on their faces and had to blink quickly to fight back a sudden onslaught of tears. How could she give up on Callie’s Candies? Making people happy was worth so much more to her than making money, she thought as she sniffled and opened her little beaded purse to look for a tissue.

The woman behind her licked bittersweet chocolate dust off of her fingers. “Wait a minute, honey. I’ve got a tissue here in my purse for you. I always cry at weddings myself. Everything about them is so perfect and beautiful, isn’t it?”

Callie forced herself to nod and then accepted the tissue from the woman. Ignoring the chocolate smear across it from the woman’s fingers, Callie blew her nose.

She liked weddings. Really she did. Especially since the happy couple had met in her store last Valentine’s Day.

She snorted at the thought of love—didn’t one need a boyfriend or even, say, a date first?—and the woman next to her scooted a little farther away. Callie felt tears well up in her eyes again. Even a middle-aged stranger thought she was weird and wanted to get away from her. Callie reached for the used tissue and blew again.

The first few chords of the wedding march rang out and the guests leapt to their feet. Callie noted that everyone was either still chewing and swallowing or licking chocolate off of their fingers as they waited for the bride to appear. She bit back a slightly hysterical laugh.

At least there is one thing about me that people love
, she thought as the radiant bride appeared from an arbor of white lattice and pink roses.

Too bad she couldn’t barter chocolate truffles for love.

Tobey stood next to the priest and tried not to sway. Planting his feet in a wide stance he clasped his hands behind his back and focused his eyes on the woman in white coming towards him.

Ruthless memories assaulted him.
What woman in her right mind would want to marry
you? Candy is for children and I want a man.

Everything blurred and Tobey had to close his eyes to keep his feet firmly planted on the ground.

The priest leaned towards him. “This is a wedding, not a wake, son.”

Tobey forced a grin even though he thought his face might crack with the strain just as James, Tobey’s best friend since the first grade, turned and gave him a thumb’s up.

God, how he hated weddings. After his one pathetic attempt at holy matrimony, which had ended before “I do” was done, Tobey had vowed never to set foot within a mile of a wedding ever again.

And now, here he was, the best man. He knew he was a sucker, but when push came to shove he couldn’t let James down. Missing his best friend’s wedding would have been the coward’s way out. Tobey was going to look his demons in the eye, support his friend on the happiest day of his life, and then get the fuck out.

Were it not for several quick swigs of tequila he wouldn’t have made it this far. And Tobey knew damn well that several more shots would be necessaryto help him get through the reception. It was the only way.

Jane’s father kissed her on the cheek and handed the bride over to the groom. Tobey saw the love flowing between them and felt nothing but emptiness inside him.

The memory tackled him again.
The Candy King? Why can’t you be more like your
brother?

Tobey tried to shake the shrill voice of his faithless bitch of an ex-fiancée out of his head to focus on the ceremony that had just begun. He knew she was right, though, and that was the worst thing of all. So what if he loved what he did and was good at it?

What did it matter if he was a connoisseur of candy? Who cared if he knew how to sell it, lots of it, for any company that hired him?

His skills were the skills of a child. It was time to grow up.

In a daze of self-loathing, Tobey watched James and Jane exchange rings. His best friend leaned in to kiss his new wife, but all Tobey could see was the face of his ex-fiancée, screwed up in rage at him.
You’ve ruined my life! I could have married someone
important. Someone successful. Don’t ever come near me again.
In his mind’s eye Tobey could still see the shock on the faces of their guests. He could still see the hatred in Gina’s eyes. But worst of all, he could see how everyone agreed with her choice.

The sound of applause pulled him from his memories and he reached out his arm to the Maid of Honor. He just needed to make it down the aisle to the bartender and then everything would be all right.

Callie pushed the salmon around on her plate. It was delicious, but she wasn’t the least bit hungry. Her lack of appetite may have had something to do with all of the newlyweds at her table. As far as she could tell there wasn’t another singleton around for miles. If she had to hear one more word about engagement rings and honeymoon trips, she was going to puke. Abruptly, she pushed her chair back and made a beeline for the bar.

A tall, broad-shouldered man stood with his back to her. Callie hadn’t paid much attention to the wedding ceremony, but she couldn’t help but notice the striking good looks of the best man. He had looked oddly grim throughout the ceremony, but at one point when he had grinned at the groom, it was as if the sun had come out from the clouds to pour down over everyone.

Callie cursed her unfortunate weakness for tall, dark, and handsome. Her friends liked to joke that the big brutes she always fell for were the perfect counterpart to her petite blonde curves. But it wasn’t really all that funny. The truth was that if the man came with a harsh past and an emptiness in his soul, she was metal to his magnet.

Which may have had something to do with her still being single, she mused unhappily.

If she could only find a nice, simple, happy man—yes, short, soft, and pale would have to suffice—everything would be perfect.

Oh yeah, except for the fact that she was going to have to close her store if she didn’t start making a profit.

Callie fell even deeper into her misery as she made her way past the last of the tables. The best man ran a large hand through his hair and said something in a low 7

voice to the bartender. The sound of his voice sent goose bumps running up her bare arms.

I wonder which tall, gorgeous, svelte woman he’s married to?
she thought, feeling more than a tad snarky. Callie knew she was being bad, but for once she didn’t care. Not only was she totally unwedded and alone, but she was about to be out of a job too. Pretty soon, instead of spending her days making candy—the one thing she loved most in the world—she was going to be sitting behind a desk in an office typing memos for some executive, or reeking of grease and saying, “Would you like onions with that?”

Callie shuddered. Coming shoulder to shoulder with Mr. Handsome and Tortured, she said to the bartender, “Give me something. Anything. Just make it strong.”

She had never had more than a sip of wine before—alcohol wasn’t her thing, not when she could do such amazing things with sugar and chocolate—but Callie didn’t care. If there was ever a time to get drunk, it was now.

The best man, who was even more striking up close, tossed back a shot of something golden then turned to face her. “She’ll have a shot of tequila,” he told the bartender, all the while holding her gaze with his own. Seemingly pleased by her shock at his forward behavior, he quirked an eyebrow and added, “Make it two. With lime and salt.”

Callie had never seen eyes so green. Or such a gorgeous, masculine face. She blinked and tried to tear her eyes from his, but she didn’t have a chance.