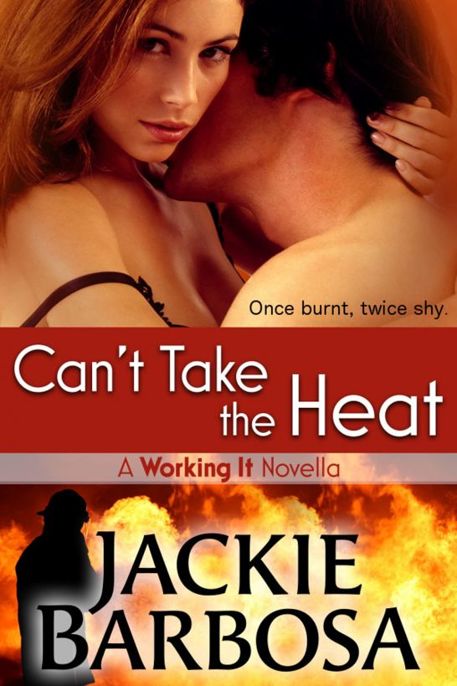 A
Working It
Novella

Copyright © 2013 by Jackie Barbosa.
All rights reserved, including the right to reproduce, distribute, or transmit in any form or by any means.

This book is a work of fiction. Names, characters, places and incidents are products of the author’s imagination or are used fictitiously.

The author acknowledges the copyrighted or trademarked status and trademark owners of the following wordmarks mentioned in this work of fiction: Coach, Flight of the Navigator, Jimmy Choo, Lexus, Mythbusters, Rolex, Star Trek, The Princess Bride, The Wall Street Journal, The Wizard of Oz.

Smoke billows in the cavernous warehouse like thick gray curtains caught by a sudden draft from an open window. There’s so much smoke filling the enormous space, it’s hard to make out the flames, but they’re there—clawing their way along stacked rows of wooden and cardboard crates, curling up the wooden posts that support the wooden beams overhead. This is an old warehouse by Las Vegas standards, probably built in the ’20s, and thanks to its lumber-heavy construction, it’s burning hot and fast. The owner will be lucky if there’s any old-growth wood to salvage after the fire is put out. There’s probably no chance at all the structure can be saved. Everything crackles and creaks. Collapse is imminent.

Ryan tugs at my arm, shouts near my ear so I can hear him over the din of our respirators and the symphony of the fire. “It’s two a.m. and the security guard called in the alarm. There’s no one in here.” He points overhead to the rafters. “It’s coming down any minute.”

I shake my head. “Not until we’re sure.”

The thing is, he’s wrong. Someone is in here, and that someone is still alive, still needs our help. I know it the way I always know—the hair on the back of my neck bristles, goose bumps pepper my skin. Don’t ask me to explain how it happens. It just does. Whenever I enter a burning building, I know if there’s anyone inside, even when I can’t see them or hear them. It’s not a psychic thing, though. Not really. Afterward, I always realize that I saw some bit of evidence, something that didn’t quite make sense, that tipped me off. It was my first experience with this ability that made me realize I had to become a firefighter.

And I feel that now. No matter what the security guard says, no matter what he believes, he wasn’t alone when the fire broke out in this warehouse.

“Damn it, Del. You’re going to get us both killed.”

I grin, even though I know he can’t see it behind the respirator. “Next time, don’t draw the short stick.”

I’m always on the team that clears a building. Thurb, our lieutenant, knows if there’s anyone in a building who can be saved, I’ll find them. The other three guys on the crew, Ryan, Miguel, and Hoss—that’s not his real name, but it’s what everyone calls him because he’s as big as one—draw lots on the way to the scene to go in with me. Ryan drew short tonight.

He eyes the ceiling again. “Two minutes, Del. If you don’t find someone in two minutes, I’ll carry you out of here myself.”

I’d stick my tongue out if I wouldn’t just lick my respirator. “Like to see you try.”

Ryan’s bigger than me, but not by much. Small, delicate women don’t get to be firefighters, even if they have a weird gift for finding people in burning buildings.

But he’s right. I have to hurry.

Between the smoke and respirator mask, it’s hard to make out much of anything, even with our headlamps shining at full brightness. I have to assume, though, that my victim isn’t hiding between the stacks of crates that are going up in flames. He or she would be dead by now, and my skin wouldn’t be prickling like I’m being poked by a thousand sewing needles.

I scan the few parts of the huge space that aren’t completely engulfed in smoke and flame. To survive in here, a person would have to be where there’s still some air to be had, and there aren’t a lot of possibilities. My gaze fixes on the far corner of the building to my left, where the smoke is wispier than elsewhere, especially near the floor.

“There,” I say, pointing in the direction I’m already heading.

The crates in this last row aren’t ablaze yet, but they will be in a matter of minutes, if not seconds. Ryan’s hot on my heels, his lamp shining just over my head into the sharp gray blackness. The smoke gets denser and heavier with every step I take.

Where are you, damn it?

I don’t give up, but the further we get with no signs of life, the more I doubt myself. Maybe I’m imagining it this time. That’s never happened before, but this could be the first.

We’ve almost reached the end of the row, and I’m just about ready to call it, to admit I’m wrong.

Then I see them: a pair of shoes sticking out from between last crate and the wall. Filthy canvas sneakers. Small ones.

I break into a trot—a run is impossible in all this gear.

The shock hits me. It’s a kid, maybe eleven or twelve. Curled up, unmoving. I can’t make out boy or girl or if he or she is breathing, but it doesn’t matter. Ryan’s right behind me. He bends over and scoops the kid up off the ground.

“Let’s get the fuck out of here,” he shouts.

“Right behind you,” I agree, but I hang back just a second. Listening, feeling, looking. Anybody else here?

I head toward the door we came in, maybe ten feet behind Ryan and the kid. The crackle and pop of the fire is deafening, and the rafters are fully engulfed in flame. Just as Ryan makes the door, there’s a sound like thunder overhead. I look up, which is stupid, because I know what I’ll see.

The roof is coming down.

Ryan’s heard it, too. He slows, turns.

He bursts out into the night. Into fresh air. With the kid, who might make it.

The thunder roars again. I run.

Oh, Wes, I’m sorry. I never should have left. I love you.

Delaney Monroe lay on her back in the hospital bed, her thick lashes fanning out above her cheeks in what could easily be mistaken for peaceful sleep. Easily, that is, if one ignored the IV lines poking into her veins, the EEG patches and wires pasted all around her head, and the bevy of monitors registering everything from blood pressure to oxygen levels to brain function.

But Wesley Barrows couldn’t ignore them, because they were exactly what he’d feared from the moment she had announced a little less than three years ago that she was going to become a firefighter, and nothing he could say or do would stop her.

She’d been right. None of his arguments swayed her. Not his very reasonable concern for her safety. Not the fact that, as an EMT, she was already saving plenty of lives. And certainly not his observation that, when it came to it, she didn’t need to work at all because the income from the two Barrows casinos was more than enough to support them both. In the end, he’d forced her to make a choice between him and her vocation. She’d made it. He hadn’t won.

But he’d been right in his way, hadn’t he? Because now she was lying unconscious in a hospital bed thanks to a head injury she’d sustained on the job, and there was no guarantee she would recover. Had achieving her goals been worth the cost? He sure as hell didn’t think so.

One of the nurses stuck his head into the room. “Any change?”

Wes shook his head. He’d been sitting here for two hours, waiting for her to emerge from the medically induced coma she’d been in for the past couple of days, and so far, she hadn’t so much as moved an eyelash.

“Hey, give her time.” The nurse must have read Wes’s concern and impatience. “Those are some heavy drugs they use. Some folks are out by now, but others take a lot longer. I’ve seen as much as eight hours.”

The neurologist had already assured him on multiple occasions that there was every reason to believe Delaney was going to come out of this just fine. Her CT scans showed no significant damage, and she’d experienced so little brain swelling that surgery hadn’t been necessary as it sometimes was in such cases. All the signs pointed to a full recovery. And if the signs were correct, she’d just go back to her dangerous job and run the risk of getting killed all over again. If they were wrong…well, he didn’t want to think about that.

But either way, he wasn’t getting her back. He was just here because, despite their years-old breakup, she had designated him as her next of kin on all her personnel and medical forms. And although that had only given him the obligation to make medical decisions for her while she was unable to, he couldn’t very well leave her to wake up in a hospital room all alone.

His father, of course, didn’t see things that way, which was why Wes’s cell phone vibrated in his pocket with what was almost certainly another text from dear old Dad. Wes had stopped bothering to check his messages after the fifth one ordering him to get his ass back to the office and do his fucking job instead of hovering over the hospital bed of his ex-girlfriend. Of all the sixty-something parents to master text messaging, why did his persistently malcontent father have to be one of them?

Sam Barrows had never liked Delaney—he thought the daughter of an unmarried showgirl who’d probably made as much of her living on her back as on her feet was beneath his son—but then, he didn’t really seem to like anyone. Not even his wife of thirty-five years or either of the two children they’d begotten together; he just hated his family slightly less than everyone else.

And Wes had to admit it was hard to argue with his father’s methods when it came to running a casino. Sam was a ruthless son of a bitch, but none of his employees dared to cross him. When a business handled millions of dollars on a daily basis, that kind of loyalty was priceless, no matter how it was earned. His father griped endlessly that Wes had learned too damn much touchy-feely crap in business school and was going to torpedo the company with his nice-guy management style. Problem was, it wasn’t business school that had taught Wes to be a nice guy. He just was one.

The Lusitania Murders by Max Allan Collins
The Veil by K. T. Richey
A Wedding on the Banks by Cathie Pelletier
Obsession (9780061887079) by Vanderbilt, Gloria
Victim of the Night (Night Trilogy Book 1) by E.R. Willis
Kamikaze (Last Call #1) by Rogers, Moira
Never Smile at Strangers by Jennifer Minar-Jaynes
Preservation by Wade, Rachael
Circus: Fantasy Under the Big Top by Ekaterina Sedia
DivineWeekend by Francesca St. Claire
Our partner