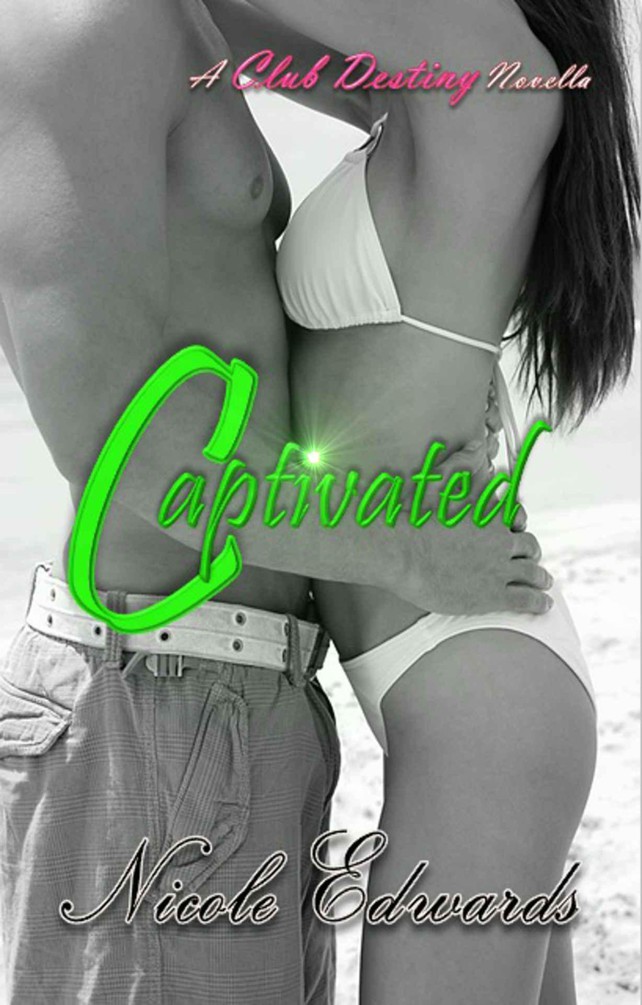 Captivated
– A Club Destiny Novella
is a work of fiction.
Names, characters, businesses, places, events and incidents are either the
products of the author’s imagination or used in a fictitious manner. Any
resemblance to actual persons, living or dead, or actual events is purely
coincidental.

This book may not be resold or redistributed without
the express consent of the author.

To all of the ladies who put a smile on my face, day
after day.

“Lucie,
I sure as hell hope you know what you’re doing.”

Yes,
she was talking to herself.
Again.

Lucie
Werner walked into the small restaurant close to the club where she worked,
glancing around to see whether he’d gotten there first. From what she could tell,
Kane wasn’t there, which was just fine by her. She needed a few minutes to
figure out a plan. Well, not really a plan. More like the words to explain the
horrible, deceitful secret she’d been keeping from him for so long.

Taking
a seat in the back, Lucie was grateful that the place wasn’t busy. At three
o’clock in the afternoon, she’d been banking on missing the lunch crowd. Considering
she had selected this place because it was public, hoping Kane might take that
into consideration before he lost his cool, which she knew, for an absolute
fact, he was going to do.

When
he walked through the front doors a moment later, Lucie suddenly felt sick.
Really, really sick. She peered through the restaurant, trying to locate the
bathrooms in the event that her stomach decided to revolt against her thanks to
those irritating little things called nerves.

“Lucie,”
Kane greeted her, taking the seat across from her as he glanced around the
restaurant as though expecting someone else to show up and save him.

Nope.
Not today. Today it was just her.

“Thanks
for coming,” she said, but she had to clear her throat just to get the words
out.

The
concerned look in Kane’s eyes was nearly her undoing. If he only knew what she
had to tell him, he wouldn’t be looking at her as though he were worried about
her health.

“No.”
That was the sad truth. Everything was not ok, nor was she sure it ever would be
again.

Lucie
detected his frustration level rising, which was not all that unusual for Kane.
He wasn’t a patient man by any means. And since she hadn’t told him what she
wanted to talk about when she’d called him earlier, she knew his curiosity was
probably getting the best of him.

“I
need to talk to you,” she choked out the words, looking around for the
waitress. She needed a glass of water or something. Her throat was constricted
by the tears she’d been shedding for the better part of the last day and a
half. Ever since she made the decision to tell him.

When
Kane reached out and touched her hand, Lucie immediately jerked away from him
as though he’d shocked her. She couldn’t touch him. No matter how badly she
wanted to. In a few minutes, she was pretty sure he’d never want to lay eyes on
her again, so this only made it easier.

Fuck
that
.
There wasn’t anything easy about this as far as she was concerned.

“Lucie.”
Kane’s tone went from friendly to stern, and she knew she was just wasting
time.

“I
need to talk to you about Haley,” she began, feeling the tears returning with a
vengeance.

“Luke
already told me,” Kane responded before she could continue.

“He
what
?”
How could Luke do that to her? Why would he? And why hadn’t Kane come to talk
to her?

“Luke
told me that he caught you stealing liquor. But he told me that it’s all been
taken care of. He understands why you did it.”

Oh,
God
.
That certainly wasn’t what she wanted to tell him, but the fact that Kane
didn’t hate her for that alone was promising. Yes, she’d been stealing liquor
from Luke McCoy, the owner of the club she worked for, but she’d had a good
reason. Well, it made sense in her mind. Except, sort of like everything else,
it really didn’t make any sense, she’d just pretended it did.

When
she had found out that Haley needed to have surgery because of her chronic
illnesses, she’d been desperate. On her salary, she could barely afford the
apartment she and Haley lived in, much less the amount of money the doctor’s
told her it would cost to get Haley well.

But
that wasn’t why she was here. She needed to focus. To tell Kane exactly what
she’d been keeping from him for the last five years.

“That’s
not what I want to tell you,” she whispered, unable to stop the first of the
tears from breaking free.

“Lucie,
you’re scaring me. What’s going on?” Kane asked her again, but this time he
didn’t sound concerned. He sounded angry.

He
couldn’t say a word. Hell, he would be surprised if he was even breathing.

Staring
back at Lucie, he tried to process what she was telling him, but there was absolutely
no fucking way he had heard her right. There was no way that her daughter, who
was now four years old, could belong to him.

In
case Lucie didn’t know, two people had to have sex in order for that to happen
and he sure as hell knew he’d never had sex with her because if he had, he
would fucking remember it.

Leaning
back in his chair, Kane dropped his hands into his lap and stared back at her.
She was crying and his first thought was that he’d missed something vitally important.
His second thought was that she was totally out of her fucking mind.

“Want
to run that by me again?” Kane asked the question when he finally found his
voice. He didn’t even sound like himself.

“Haley
is your daughter,” she repeated, sounding as though she actually believed what
she was saying.

Kane
couldn’t believe his ears, but there was something in the back of his mind that
told him she wasn’t out of her mind delirious. For years, Kane had felt like he
and Lucie had a connection, although, for the life of him, he had no idea why
he felt that way. Sure, he was attracted to her. Lucie was a beautiful woman.
But that was as far as it went.

“It’s
not possible,” he barked, the fury beginning to churn in his gut. She was lying
to him. Why the hell would she do that?

“It’s
true.” Lucie was sobbing almost uncontrollably now, and Kane had no idea why
she was crying.

“When?
How?” Ok, now that sounded stupid because he knew how babies were conceived,
but he just could not figure out how he factored in to this.

“I
drove you home from the bar one night after we’d all stayed late. You’d been
drinking shots, and you were in no condition to drive. You invited me in your
house.”

Kane
heard her words, but he didn’t know what she was talking about. She had to be
delusional. There was no other way to explain it. Kane would’ve remembered. He
couldn’t have been that...

Kane
was having a hard time breathing again.

Haley
was four years old. That meant she was conceived nearly five years ago. That was
the year... No. No, no, no. He hadn’t.

Staring
back at her blankly, Kane said the only thing he could say. “I want a paternity
test.”

“Absolutely,”
Lucie agreed easily, wiping her eyes with a napkin she’d taken from the table
as Kane watched her. “I’ll pay for it. I’m so sorry, Kane. So very, very
sorry.”

With
the blood crashing in his ears, Kane could barely make out the words Lucie was
saying. He couldn’t believe... It had to be a mistake...

Kane
blinked; his vision hazy for a second before it cleared. Staring back at the
dark haired woman sitting across from him, he suddenly realized she was telling
him the truth. He couldn’t remember, but he knew without a doubt that Lucie
Werner wasn’t lying to him. He had no idea why he believed her, but he did. And
she agreed to a paternity test which would prove it. He needed proof. He’d get proof.

He
wasn’t sure whether he’d be able to stand up and walk out of the restaurant,
but he knew three things for absolute certain: He had slept with Lucie and
Haley was his daughter. He didn’t remember a fucking thing about that night.
And Lucie had been keeping him from his daughter all this time.

Now,
if only the red haze would fade from his vision, and he could manage not to wrap
his fingers around Lucie’s neck and squeeze the life out of her, Kane might
just be able to figure out what to do next.

Standing
behind the long edge of the bar, Kane Steele watched as his boss descended the
stairs from the second floor. If he’d thought a shitty day couldn’t get worse,
he hadn’t considered the fact that Luke McCoy had been in rare form for the
better half of the night.

“Kane!”
Luke’s powerful voice boomed from across the room and raked like fingernails
down a chalkboard across Kane’s last nerve.

It
was the end of the night – or rather morning – for crying out loud. Didn’t the
man have something better to do? Or better yet –
someone
... no, make
that
two
someone’s
to do?

“What’s
up?” Doing his best not to sound frustrated, Kane pasted on what would pass as
a smile and turned his attention to the imposing man making his way across the
now empty club floor.

Call
him a pessimist but after having spent the last few nights watching all of the happy
fucking people wandering around the bar – namely the McCoy clan who’d been
congregating at Club Destiny in celebration of one thing or another it seemed
for weeks now –  Kane wasn’t finding it easy to be in a good mood these days.