Read Captured by the Cyborg Online 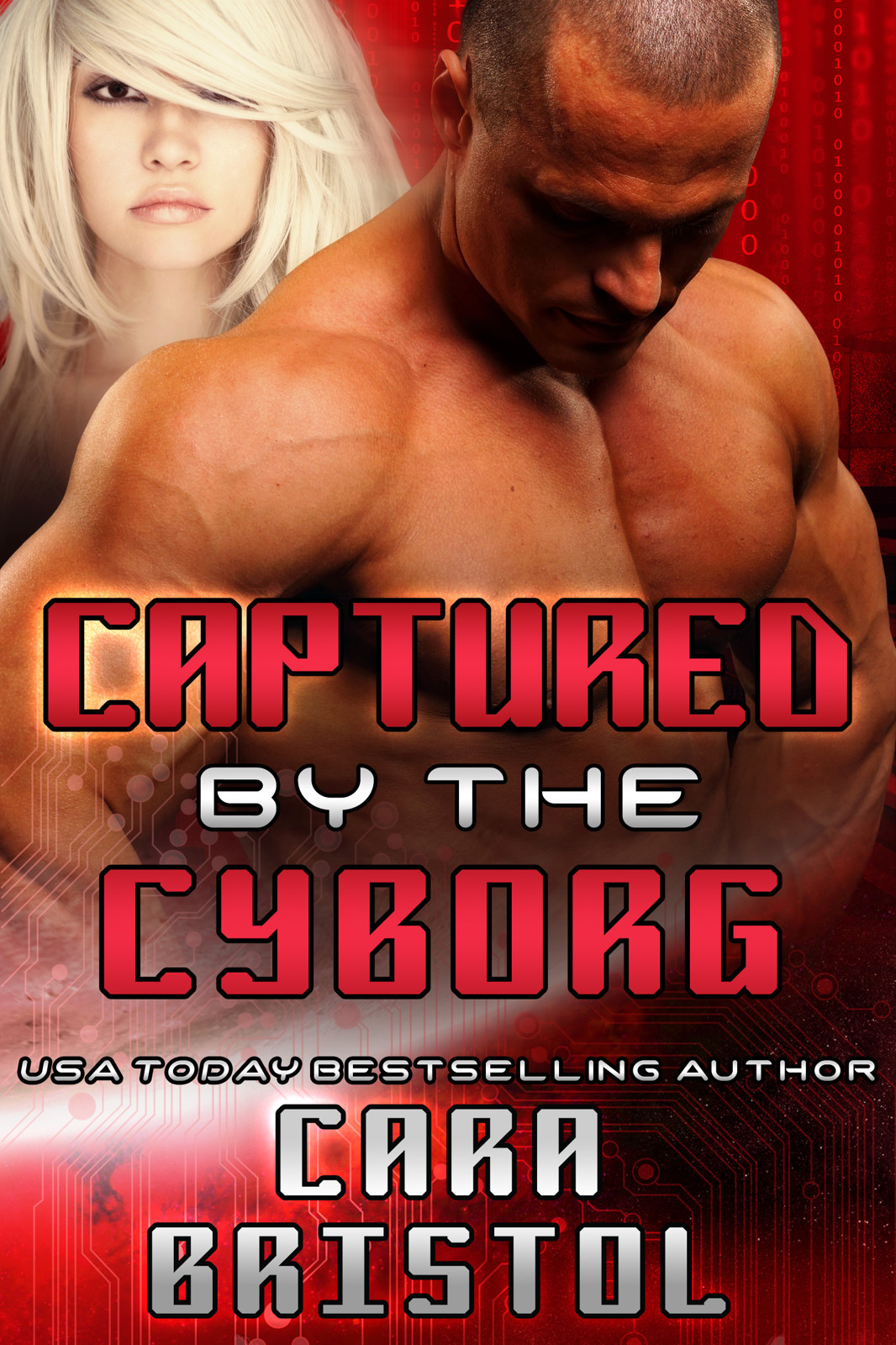 Sometimes the biggest risk is to one’s heart….

An ex-Cyber Operations field agent, Dale Homme has kissed danger and betrayal more times than he cares to count. Now he runs a clandestine factory beneath the surface of the moon Deceptio, where confidentiality and security matter more than anything. When a beautiful young woman arrives seeking a job, Dale knows within minutes she’s lying. Everything about her is false: her past, the people she claims to know, her reason for being on Deceptio. Illumina Smith? Even her name is an alias. Logic says send her packing. His gut says she’s in trouble. She needs him. So he’ll do anything to keep her safe…even if it means keeping her captive.

All rights reserved. This copy is intended for the original purchaser of this e-book ONLY. No part of this e-book may be reproduced, scanned, or distributed in any printed or electronic form without prior written permission from the author. Please do not participate in or encourage piracy of copyrighted materials in violation of the author's rights. Purchase only authorized editions.

Formatting by Wizards in Publishing

“What’s wrong, Baby? Why can’t you fly?” Dale rubbed his neck as he pored over test data for the ZX7M, a high-speed luxury spacecraft nicknamed Baby because she’d proven as temperamental and unpredictable as a colicky infant.

After performing flawlessly in computer simulations, Baby stalled out in test flights. The Xenian emperor who’d ordered her had begun pushing for delivery, his patience nearing an end. If they didn’t hand her over soon—or if she failed to perform as promised, Moonbeam Chop Shop could kiss good-bye the option for any future contracts.

Baby hadn’t been built to be a single, unique spacecraft, but to be the prototype for an entire fleet. A contract of that magnitude would provide financial security for years.

For himself, Dale didn’t need security of any kind. Too much security bred complacency and boredom.

Boredom led to dissatisfaction. He puffed out his cheeks and expelled a long breath.
This was what you wanted. You chose this.
Most people would consider his business, which sometimes operated on the shady side of galactic law, exciting—but it didn’t deliver the adrenalin rush he’d gotten from being a field operative. He didn’t think he’d miss Cyber Operations when he left, but he did.

Ping!
The microprocessor embedded in his brain signaled an incoming communication.

Hey, boss. I’m on site and settled in.
The message stream shooting into Dale’s head originated from Charlie’s computer.

Welcome back!
Dale greeted his assistant
. How was R&R?

Stellar—until I got some bad news before I boarded the shuttle.

Meemaw isn’t doing well. Mom says she might not last much longer.

I’m sorry to hear that. You sure you’re ready to come back to work? Maybe you’d rather be with her?
His assistant often talked about his grandmother, and
on his desk
kept a stillvid of a vital steel-haired lady with eyes to match who looked like she kicked some serious ass. The possibility of losing her must be very hard on him.

Thanks, I appreciate that, but there’s nothing I can do. I’ll check on her during my next leave. I don’t want to dwell on what might happen, so I’m happy to be back on Deceptio and working again.

What else would one say to the boss? If the comment had come from anyone else, he would have assumed the guy was blowing smoke up his ass, but Charlie’s enthusiasm for his job had always seemed genuine.

Well, I’m glad to have you back,
he said, even though he didn’t begrudge any employee furlough. A person could only spend so much time underground before he went nuts—which was why Moonbeam had a brig in addition to a generous leave policy. Just in case. So far, R&R had done the trick, and no one had snapped.

Maybe that was the source of his dissatisfaction—he didn’t follow his own policy. He’d been off moon for business, but how long had it been since he’d taken a vacation? One year, four months, and twelve days, his microprocessor reported. Too long.

Being stuck on Deceptio also eliminated the chance for feminine companionship. He was the boss. Nothing good could come of getting involved with an employee so he lived by a strict hands-off personal code, which he’d never violated.

How long had it been since he’d gotten laid?

One—
his cyberbrain started to tell him, but he cut off the information. That kind of data he didn’t need to know.

He did fine, but he’s not you.
The fill-in had been capable—all Moonbeam employees were competent or they wouldn’t be here, but, as owner, Dale dealt with confidential proprietary matters and needed an assistant he could trust without reservation. No substitute could fill Charlie’s shoes.

That’s what I like to hear. Job security. Speaking of jobs, the candidates for the Diagnostics and Repair position have arrived.
They’re scheduled to meet with March, and the ones who pass his muster will be sent to you.

Great.
When Moonbeam’s computer experts hadn’t been able to figure out Baby’s problem, Dale had sought outside help. Headhunters had combed the galaxy for months to recruit candidates with the right skill set
and
the willingness to tolerate Deceptio’s working and living conditions. Time had about run out. Whether a newbie could get up to speed on Baby’s systems and then figure out the problem before the craft had to be delivered was doubtful. At this point, he was desperate, out of options.
How many candidates are there?

Six. Originally eight, but three decided before they boarded the shuttle they didn’t want the job, and then there was a last minute add-on.

Par for the course. Not only were workers sworn to secrecy, unable to share the details of their jobs, but the Moonbeam remanufacturing plant was located a kilometer below the barren surface of Deceptio. Staff lived and worked underground for months at a time—until scheduled R&R allowed them to venture off moon.

Nor were employees told where in the galaxy they were. Transport to and from Deceptio occurred in blackout. Only a select handful of managers and carefully vetted test pilots knew the coordinates. Even Charlie didn’t know.

Dale pushed back from his chair and strode to the glass wall overlooking the factory floor. His cyber-enhanced vision zoomed in on the job candidates sitting in a row across from Charlie’s desk. Four men, one woman…and a
child
?

A kid is interviewing?

Charlie glanced up at the window. His assistant, who had normal 20/20 human vision, couldn’t see him from the distance, even if the glass wasn’t a two-way mirror.
You mean the blonde girl?

Yeah. Is she a prodigy?

No, just a petite adult female. She’s the last-minute addition, so you haven’t seen her application.

If she hadn’t perched on the edge of the seat, her feet wouldn’t have touched the floor. The other candidates chatted among themselves, no doubt comparing impressions of their experiences so far, but she sat disengaged from the others, her chair a discreet distance away, her hands folded in her lap.

Why don’t you send her up?

Hold on; let me shoot you her CV.

A split second later her curriculum vitae popped up.
Illumina Smith
.
Female
.
Age 24.
Graduated with honors from the Terran Cyberscience Institute. Four years as a programmer with Infinity AI Corporation. Given her youth, she didn’t have longevity behind her, but the qualifications she did have were impressive. TCI was recognized throughout the galaxy for its excellence. Its graduates were highly sought after. And, Infinity, the number one android manufacturer, hired the best of the best. Job seekers would kill to work for them. So why leave? A good question for the interview.

Charlie motioned to the woman and then pointed to the stairs leading to Dale’s office. He turned away from the window and removed computer debris from a chair. Moments later, a brisk tap sounded outside. He opened the door.

Petite adult? Try sprite. The woman’s head didn’t reach his shoulder. But what she lacked in stature, she compensated for with hair.

Shimmering, silvery-blonde waves of it tumbled to her hips. The platinum shade didn’t reflect light, it
radiated
it, almost as if the individual strands were composed of fibers of light itself. Although women could and did take chemical supplements to alter pigment at the cellular level, and platinum hair was not unusual, the combined effect of the color and shine was. Striking under the harsh artificial illumination—what would it look like in moonlight?

In a complete violation of propriety, he reached out to touch. He caught himself and snapped his hand to his side, calling upon his nanocytes to stamp out the kindling of desire. Turned on by a job candidate’s hair. This is what happened when you didn’t get laid often enough. Not entirely his fault though. He’d planned to visit the Darius 4 pleasure resort, until Lamis-Odg terrorists had destroyed the place. Under reconstruction, reopening hadn’t been scheduled yet.

He forced his attention away from her hair.

And noticed her clothing. What the
hell
was she wearing? Masculine, almost military-style trousers in a fabric mottled in various shades of tan led to clunky coyote-brown boots. A loose-fitting jacket in the same variegated pattern covered her top half. Fatigues—but from what century? The twenty-first maybe? Where had she acquired the getup?

“Mr. Homme?” Gray eyes met his in a direct stare. “I’m Illumina Smith. Thank you for seeing me.” Her voice tinkled like chimes blowing in a gentle wind, but the hand that seized his gripped like a steel clamp.

It’s not an arm wrestling match
. He hid his amusement while noting the slenderness of her bone structure. His thumb and index finger would overlap if he were to encircle her wrist. “Come in. Have a seat.” He gestured.

She lurched with a jerky, awkward gait to the chair and sat, her posture rigid. Her robotic movement was so opposite the grace he’d expected, he ran a quick scan. No, not android. An organic, sentient life-form, but not human either.

“Your name is very unusual.” He plopped into his sensa-chair, which immediately conformed to the shape of his body and began a massage.

A tiny furrow creased her forehead. “Smith is a common Terran surname.”

“Oh,” she said, and for a split second her skin turned luminescent.

A normal human wouldn’t have noticed the brief flash, but a cyborg with enhanced vision caught it right away. “How was the flight?” he asked. To protect the location of the installation, interviewees had been picked up at a central planet and transported via a windowless spacecraft.

“Smooth. The stewards were very attentive.”

“Good to know,” he said. “I’m curious, how did you hear about this position?”

“Cy-Net. I saw a posting.” She paused. “Although it didn’t give a lot of information. It was rather cryptic.”

“And that encouraged you to apply?”

Ads were worded to be vague, but coded with keywords to attract individuals with the right skill set. In his mind’s eye, he scanned through the documents Charlie had transmitted with her CV to verify she’d signed the confidentiality statement. She had.