Read CARNAL, The Beast Who Loved Me Online

CARNAL, The Beast Who Loved Me 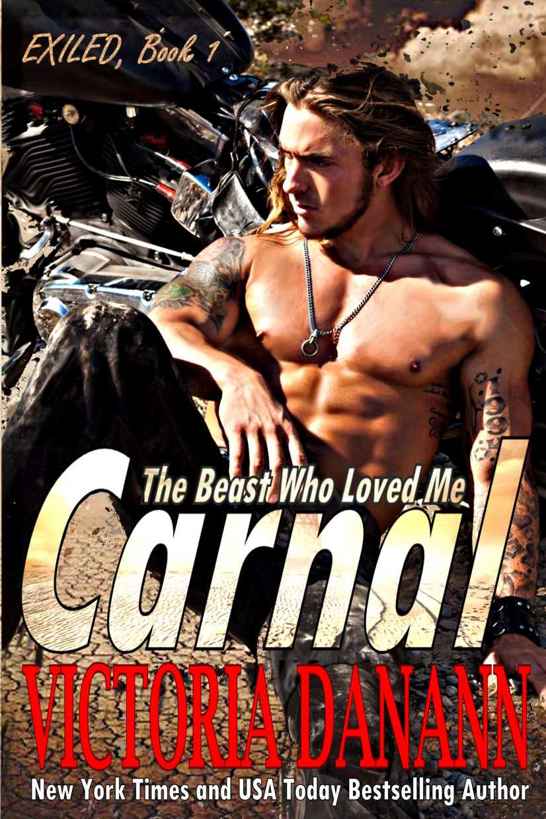 Read more about this author and upcoming works at
VictoriaDanann.com

This series is also a serial saga in the sense that each book begins where the previous book ended.

There is a very old and secret society of paranormal investigators and protectors known as The Order of the Black Swan. In modern times, in a dimension similar to our own, they continue to operate, as they always have, to keep the human population safe. For centuries they have relied on a formula that outlines recruitment of certain second sons, in their early, post-pubescent youth, who match a narrow and highly specialized psychological profile. Those who agree to forego the ordinary pleasures and freedoms of adolescence receive the best education available anywhere along with the training and discipline necessary for a possible future as active operatives in the Hunters Division. In recognition of the personal sacrifice and inherent danger, The Order bestows knighthoods on those who accept.

BOOK ONE.
My Familiar Stranger:

The elite B Team of Jefferson Unit in New York, also known as Bad Company, was devastated by the loss of one of its four members in a battle with vampire. A few days later Elora Laiken, an accidental pilgrim from another dimension, literally landed at their feet so physically damaged by the journey they weren't even sure of her species. After a lengthy recovery, they discovered that she had gained amazing speed and strength through the cross-dimension translation. She earned the trust and respect of the knights of B Team and eventually replaced the fourth member, who had been killed in the line of duty.

She was also forced to choose between three suitors: Istvan Baka, a devastatingly seductive six-hundred-year-old vampire, who worked as a consultant to neutralize an epidemic of vampire abductions, Engel Storm, the noble and stalwart leader of B Team who saved her life twice; and Rammel Hawking, the elf who persuaded her that she was destined to be his alone.

Ten months later everyone was gathered at Rammel's home in Derry, Ireland. B Team had been temporarily assigned to The Order's Headquarters office in Edinburgh, but they had been given leave for a week to celebrate an elftale handfasting for Ram and Elora, who were expecting.

Ram's younger sister, Aelsong, went to Edinburgh with B Team after being recruited for her exceptional psychic skills. Shortly after arriving, Kay's fiancée was abducted by a demon with a vendetta, who slipped her to a dimension out of reach. Their only hope to locate Katrina and retrieve her was Litha Brandywine, the witch tracker, who had fallen in love with Storm at first sight.

Storm was assigned to escort the witch, who slowly penetrated the ice that had formed around his heart when he lost Elora to Ram. Litha tracked the demon and took Katrina's place as hostage after learning that he, Deliverance, was her biological father. The story ended with all members of B Team happily married and retired from active duty.

Istvan Baka was captured by vampire in the Edinburgh underground and reinfected with the vampire virus. His assistant, Heaven McBride, was found to be a "summoner", a person who can compel others to come to them when they play the flute. She also turned out to be the reincarnation of the young wife who was Baka's first victim as a new vampire six hundred years before.

Elora Laiken was studying a pack of wolves hoping to get puppies for her new breed of dog. While Rammel was overseeing the renovation of their new home, she and Blackie were caught in a snowstorm in the New Forest. At the same time assassins from her world, agents of the clan who massacred her family, found her isolated in a remote location without the ability to communicate. She gave birth to her baby alone except for the company of her dog, Blackie, and the wolf pack.

Heaven was instrumental in calling vampire to her so that they could be intercepted and given the curative vaccine. Baka was found, restored, and given the opportunity for a "do over" with the wife who had waited for many lifetimes to spend just one with him.

Ram and Elora moved into temporary quarters at Jefferson Unit to protect mother and baby. Sol asked Storm to prepare to replace him as Jefferson Unit Sovereign so that he could retire in two years. Storm declined, but suggested twenty-year-old trainee, Glendennon Catch for the job.

Litha uncovered a shocking discovery about the vampire virus by accidentally leading five immortal host vampire back to Jefferson Unit. Deliverance struck a deal with Litha to assist Black Swan with two issues: the old vampire and an interdimensional migration of Stalkson Grey's werewolf tribe.

In the process of averting possible extinction of his tribe, the king of the Elk Mountain werewolves, Stalkson Grey, fell in love with a cult slave and abducted her with the demon's assistance. He eventually won his captive's heart and took his new mate to the New Elk Mountain werewolf colony in Lunark Dimension where the wolf people’s ancestors had settled centuries before.

Throughout this portion of the story, Litha's pregnancy developed at an alarming rate. Since there had been no previous instance of progeny with the baby's genetic heritage, no one knew what to expect. The baby arrived months ahead of schedule. The birth was dramatic and unique because Storm's and Litha's new daughter, Elora Rose, "Rosie", skipped the usual delivery with a twelve inch ride through the passes and appeared on the outside of Litha’s body.

Book Five opened with Storm and Litha enjoying quiet days at home at the vineyard with a brand new infant. Sol shocked Storm with the news that he was getting married to Farnsworth and asked Storm to help Glen run Jefferson Unit so that he could take a vacation – his first ever – with his intended. Storm agreed, but when Rosie reached six weeks her growth began to accelerate drastically.

Deliverance was to pick Storm up every day, take him to Jefferson Unit so that he could spend two hours with Glen and supervise management of Sol’s affairs, then return him to Sonoma, but the demon lost his son-in-law in the passes en route to New Jersey. Every paranormal ally available was called in for a massive interdimensional search. Finally, Deliverance was alerted that Storm had been located.

The demon picked him up and dropped him in Litha’s bedroom, but it was the wrong Storm. B Team, Glen and Litha all undertook a project to do a makeover on the fake Storm so that nobody would find out that there was a huge flaw with interdimensional transport.

Jefferson Unit was attacked by aliens from Stagsnare Dimension, Elora’s home world, with nobody there to offer defense except Elora, Glen, the fake Storm, Sir Fennimore, the non-combat personnel and the trainees.

The book opened
with a look behind the metaphysical scene. It seemed that the strings governing Earth-related operations were being pulled by a group of misfit adolescent deities who were, eons in the past, given the planet and its derivative dimensions as a group project.

Kellareal led the elves and fae to discover
the truth that they were once the same people, but were separated in the distant past because of a tragic estrangement of siblings. After believing that they had escaped the politics of their families, Duff and Song were captured and separated. With the angel’s help, however, they were reunited. Meanwhile, Aelsblood, Ram’s older brother was removed as monarch and his son, Aelshelm, succeeded as king in name only under the agreement that Ram’s father,
Ethelred Mag Lehane Hawking
, would reign in Helm’s place until he was old enough to decide whether he would join the family business and accept a career as king.

Sol crossed the veil, but raised so much hell in the afterlife that the Council was persuaded to place his essence in the body of a Black Swan knight that had recently been vacated. He returned to Jefferson Unit with every intention of concealing his true identity, but intentions often go astray.

Dr. Mercy Renaux was a professor of archeology hired to investigate a vampire tomb unearthed in Bulgaria. She took the job thinking she would change her life and find something to blot out the guy she couldn’t forget, Sir Rafael Nightsong, bad boy member of the infamous Z Team.

She found him even harder to forget when Raif’s team was assigned to escort her on a mission to contain irrefutable evidence that vampire existed. After being trapped inside a mountain together and presumed dead, Mercy and Raif decided the spark that had exploded a New York speed date could be used to ignite a more pleasurable and lasting connection.

From
A Tale of Two Kingdome, Book 6, Knights of Black Swan

Thursday night Storm and Litha carried on a silent conversation at dinner while Rosie intermittently pushed food around her plate. She hadn’t really expected that Glen would respond to her ultimatum and, perhaps on some deep core level she might have known she wouldn’t have respected him if he had.

In some ways, having been born with her parents’ education and memories, Rosie was both knowledgeable and wise. In some ways though, she was as immature and inexperienced in how to manage life in the world as any twenty-year-old. She was too proud to admit that she’d made a mistake by proclaiming a high stakes, winner-take-all tug of war with Glen over
his
career choice, and didn’t know how to admit that she’d been wrong and back away from her actions, so she’d determined that she was going to dig herself further into the sinkhole.

The Ring Bearer by Felicia Jedlicka
The Chocolate Debutante by M. C. Beaton
Steel and Stone by Ellen Porath
Fowl Weather by Bob Tarte
Perfection of the Morning by Sharon Butala
Evil in Return by Elena Forbes
Dr. Horatio vs. the Six-Toed Cat by Virginia Smith
PINELIGHTforkindle by Peery, Jillian
The Sword of Moses by Dominic Selwood
King's Man by Angus Donald
Our partner