Read Carry the One Online 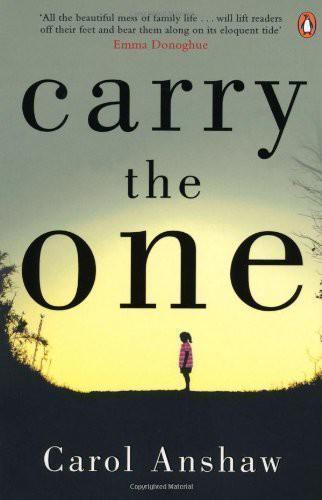 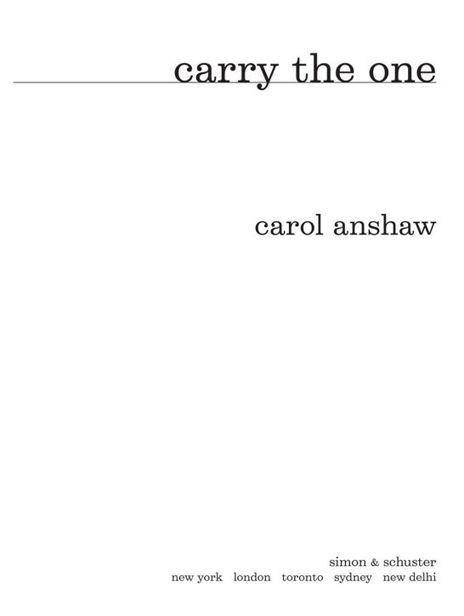 Two sections of this book were originally published in slightly different versions as stories— “Hammam” in
Story,
then in
Best American Short Stories,
“Touch and Go” in
Tin House
.

All rights reserved, including the right to reproduce this book or portions thereof in any form whatsoever. For information, address Simon & Schuster Subsidiary Rights Department, 1230 Avenue of the Americas, New York, NY 10020.

in memory of my brother, doug

Chapter 10: portraits of girls at windows [alice in amsterdam]

Chapter 13: in the corner, in the spotlight

Chapter 25: the joke about the complaining monk

Chapter 27: an opposite of iceland

oh the night came undone like a party dress

and fell at her feet in a beautiful mess.

So Carmen was married, just. She sat under a huge butter moon, on a windless night in the summer of 1983, at a table, in front of the remains of some chicken cordon bleu. She looked toward the improvised dance floor where her very new husband was doing the Mexican hat dance with several other large men, three of them his brothers, other Sloans. Matt was a plodding hat-dancer; his kicks threw the others off the beat. In spite of this lack of aptitude, he was waving her over, beckoning her to join in. She waved back as though she thought he was just saying hi. She was hoping to sit out this early phase of her marriage, the mortifying dances segment.

“Don’t be discouraged. Everything will get better from here.”

This was Jean Arbuthnot, who sat next to Carmen, tapping the ash off her cigarette, onto her rice pilaf. Jean and Alice, Carmen’s sister, were among the artists who had taken over this old farm in the middle of Wisconsin. Jean played and recorded traditional folk music in a workshop on the edge of the property. Alice painted in a studio that occupied half the barn.

“Bad dancer doesn’t mean anything else, does it?” Carmen said. Matt was now doing a white-guy boogie to a bad cover of “Let’s Get
Physical,” shooting his hands out in an incoherent semaphore. “Like being bad at parallel parking means you’re bad in bed?” She pushed back her chair. “I’ve got to pee. This is apparently a big part of being pregnant. I didn’t know that before.”

“Just use the outhouse.”

“I am going up to the house, where looking in is not a problem.”

Jean took Carmen’s hand for a moment, then let go. They were old friends, which made this brief touch a little slip of regular in the middle of these unfamiliar, celebratory events. Seated on Jean’s other side was Tom Ferris, a minor Chicago folksinger. At the moment he was banging his forehead softly on the table, to indicate he couldn’t abide the terrible cover band. Even though it was now definitely night, he was still wearing his signature accessory—Wayfarer shades. Today he sang while Carmen and Matt exchanged rings. Some Scottish ballad about a pirate and a bonny bride, a ship on stormy seas. Jean backed him up on a dulcimer. The two of them were fiercely committed to preserving traditional music. Superficially, that was their whole connection. Their covert connection was being tragic lovers, the tragedy being that Tom was married, with small kids. Carmen thought Tom was a total waste of Jean’s time, but of course didn’t express this opinion to Jean.

“I wonder where our backup bride has gone off to?” Carmen looked around as she stood up. Her brother, Nick, had shown up for the occasion in a thrift-shop wedding dress. His new girlfriend, Olivia, was wearing a Vegas-y, powder-blue tux. Some nose-thumbing at gender roles, or one of Nick’s elaborate, obscure jokes. Neither of them was in evidence among the crowd.

Carmen entered the farmhouse by the back door into the kitchen, which at the moment was vacant of humans, going about a life of its own. An ancient refrigerator emitted a low, steady buzz. The pump
spigot dripped into a sink whose original porcelain was, in a circle around the drain, worn down to the iron beneath. A fat fly idled around the open window amid dangling pieces of stained glass. The room sighed out its own smell—a blend of burnt wood and wet clay. Trace elements of blackstrap molasses, tahini, apples, and dirty socks were also in the mix.

She passed through the living room with its brick-and-board bookshelves, walls filled with paintings by Alice and the other painters who lived here. In the corner, a giant wood stove hulked (the house had no central heating). The only undisguised piece of furniture was a ruby red velvet sofa from the 1930s, left by some distant, previous tenants. Everything else had been brought up from city apartments—cheap, rickety furniture draped with feed-sack quilts. A coffee table littered with seeds and rolling papers and a stagnant bong.

She headed up the stairs.

Alice was going to have to pull herself together, get herself outside, get her feet back on solid ground, she knew that. Instead she was lingering in surprising circumstances, having been dragged out of the ordinary progress of life into a hurtling, and (of course) sexual, detour. Which accounted for her not properly participating in her sister’s wedding reception. Not living up to her duties as maid of honor. Particularly, currently, not doing the Mexican hat dance, whose ridiculously peppy melody drifted up from the dance floor, through the screen of her bedroom window, audible in spite of the giant box fan wobbling on the floor. Rather she found herself naked, face down on her bed, pinned beneath the groom’s sister.

So far, this was the best moment of her life.

Draped over the edge of the bed, she looked down at their abandoned clothes. The parachute pants and slinky silk tops she and Maude bought together a couple of weeks ago—the day they met as bridesmaids—lay in a shimmery clutter on the plank floor. They hadn’t seen each other again until this afternoon when they walked together down
the petal path, then stood side by side witnessing the ceremony. When Maude’s bare arm brushed against Alice’s for the third time, Alice decided not to take it as an accident.

And now, with a few intermediate steps, they had arrived exactly here. The evening was nearly as hot as the day it had come out of. The box fan had been running on high and was angled toward the bed, but still both of them were slick with sweat, also a little surprised to find themselves in their current situation. Still neither blamed it on the stunning weed they smoked just before the ceremony. Something had happened, they just weren’t sure what.

“We should probably get back out there.” Maude said this, but in an unconvincing voice, and without making a move to go anywhere.

“I don’t know what to say about this,” Alice said.

Maude was cupping Alice’s buttocks and had worked her fingertips lightly between Alice’s legs, teasing. “It could just be a one-wedding stand.”

While the fingers slid in, then out, Alice asked, “Could you stay over tonight?”

“I have a shoot tomorrow afternoon in the city.” Maude was in nursing school, but was also a model, for Field’s. Carmen had shown Alice a brochure. In it Maude’s hair was puffed and sprayed into a housewife helmet. The problem, according to Carmen, was that Maude was too gorgeous for a department store. They had to suppress her wild looks, tamp her down to pleasant and purchase-inducing. Then they could prop her next to coffee makers and bathroom vanities, in small-print dresses, quilted robes.

In this particular moment, Alice didn’t think she could ever get enough of her. She lay very still, listening for rejection in Maude’s excuse, but all she could hear were the soundless fingers. Then Maude said, “Maybe you could come back to the city with me? Stay overnight?” And Alice flooded with a goofy euphoria.

As they passed a cigarette back and forth while they shimmied back into their wedding gear, Alice was a slightly different person than
she had been an hour earlier, more alive. Medical tests, she was sure, would show her pulse elevated, her blood thicker with platelets.

Second Time Around by Colette Caddle
Sophie and the Rising Sun by Augusta Trobaugh
Legacy by Larissa Behrendt
Out of Range by C. J. Box
Kiss of an Angel by Janelle Denison
What the Waves Know by Tamara Valentine
Beautiful Bitch by Christina Lauren
The Brixen Witch by Stacy Dekeyser
Leap - 02 by Michael C. Grumley
On Chasing Brad Through Purgatory by Stephen Benatar
Our partner