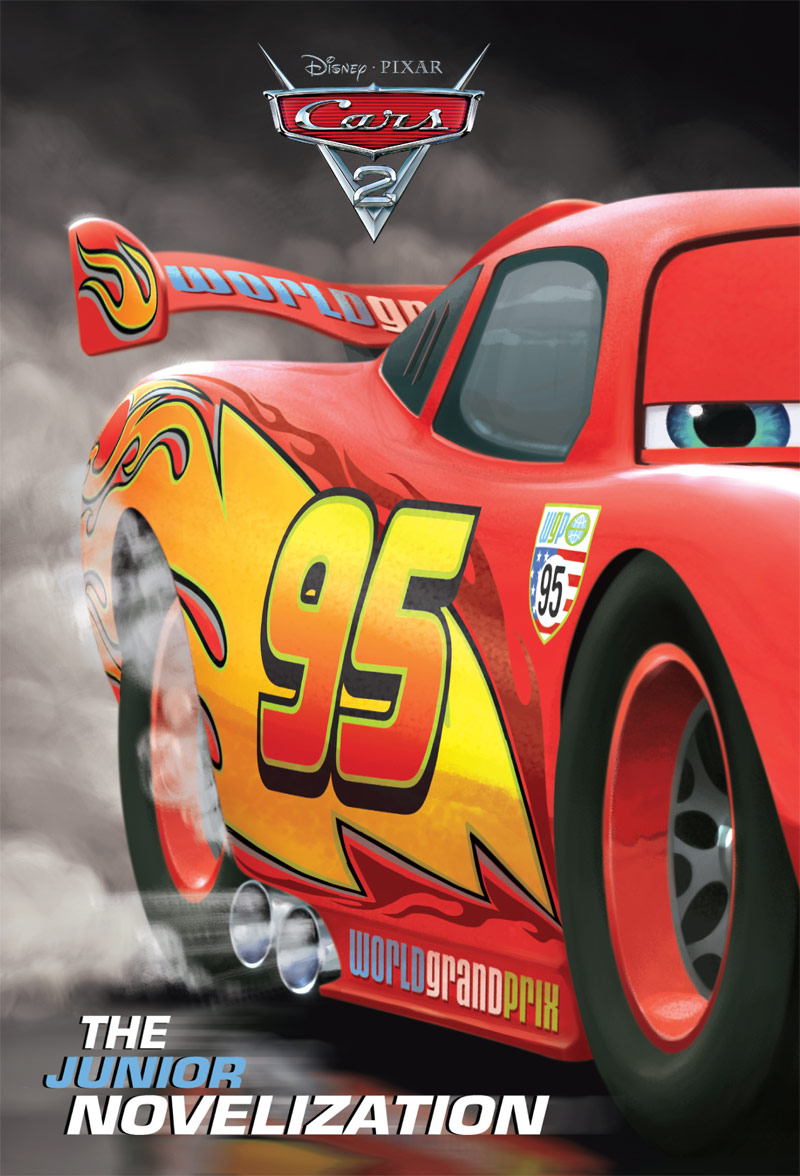 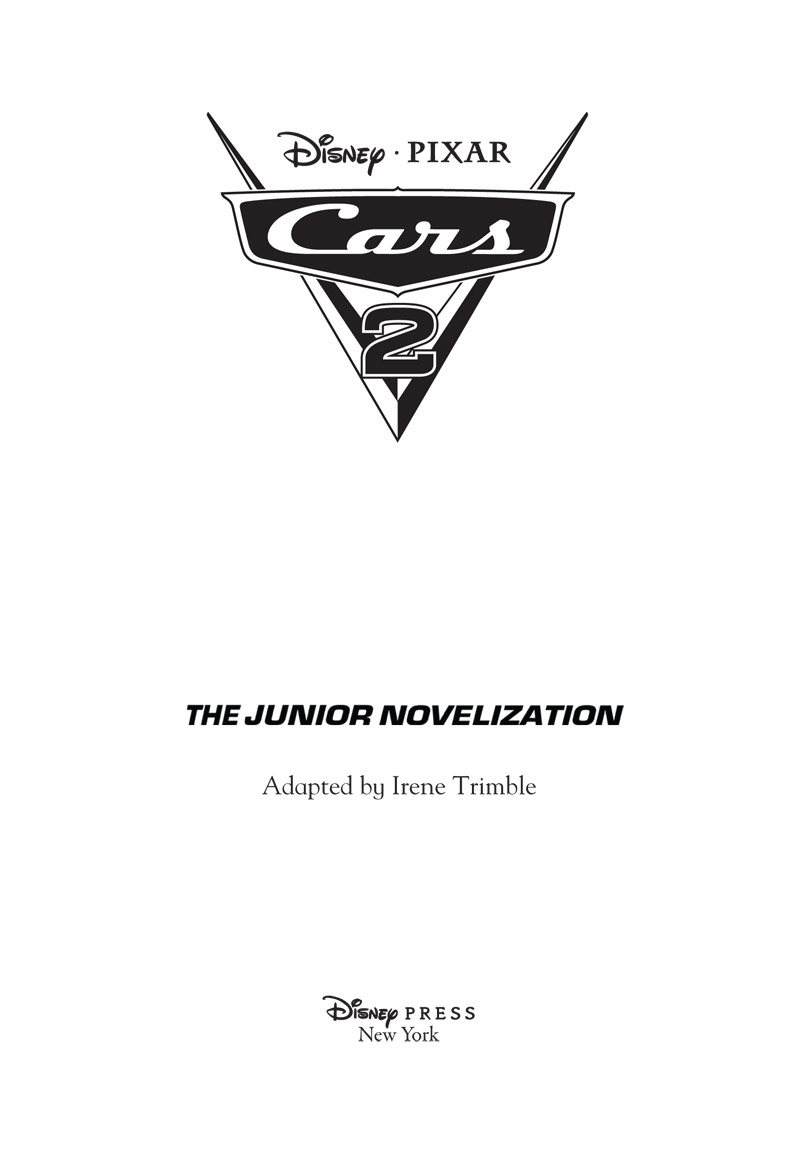 Materials and characters from the movie
Cars 2
. Copyright Â© 2011 Disney/Pixar. Disney/ Pixar elements Â© Disney/Pixar, not including underlying vehicles owned by third parties; and, if applicable: Pacer and Gremlin are trademarks of Chrysler LLC; Volkswagen trademarks, design patents and copyrights are used with the approval of the owner, Volkswagen AG; FIAT and Topolino are trademarks of FIAT S.p.A.

All rights reserved. Published by Disney Press, an imprint of Disney Book Group. No part of this book may be reproduced or transmitted in any form or by any means, electronic or mechanical, including photocopying, recording, or by any information storage and retrieval system, without written permission from the publisher. For information address Disney Press, 114 Fifth Avenue, New York, New York 10011-5690.

“T
his is Agent Leland Turbo,” the British spy car whispered hurriedly. “I have a flash transmission for Agent Finn McMissile.” Turbo was looking directly into the camera of his audiovisual transmitter, trying to reach headquarters. The agent quickly spun and checked to see if his enemies were approaching. Safe so far. “You won't believe what I've found out here. This is bigger than anything we've ever seen. And no one knows it exists.”

The audio static was making Turbo's message nearly indecipherable, but some of his words were crystal clear: “Finn, I need backup!” The transmission flickered. Then Turbo added, “Transmitting my grids now. Good luck.”

Hours later, in the pitch-dark night, a feisty little boat fearlessly made its way through the rough seas of the North Pacific. It stayed on course as its bow alternately rose and slammed down into the oncoming swells.

On board, Agent Finn McMissile steeled himself as the boat approached the coordinates designated on his dashboard. As one of Britain's best spies, Finn had serious business to address tonightâclandestine business.

“All right, we're hereâright where you paid me to bring you,” Finn's scrappy ride told him as they rocked from side to side. “The question is: Why?”

The tiny boat glanced back at his rider. “I hate to break it to you, but there ain't nobody out here.”

Finn braced his tires. The little boat was wrong about that. The agency had tracked Finn's fellow agent Turbo to these very coordinates. Turbo was somewhere out here, and he was in trouble. Turbo also had informationâimportant, top-secret information.

Suddenly, the bright light of a massive combat ship targeted the little boat. Finn took this as a signal that they were close to his enemy. No one else around here would have high security. He quickly backed into the shadows.

The combat ship suddenly swung a laser beam directly at the boat and ordered, “Turn around and go back where you came from.”

But no one answered. Finn McMissile was gone.

As the combat ship navigated the turbulent waters, Finn hung off the large vessel's side, unseen. A sudden discharge of orange flame briefly illuminated the darkness. In the flash, Finn could see that the ship was pulling alongside a huge oil derrick.

He quickly released a high-tech tether that held him to the side of the ship, and drove up to one of the higher platforms. The deck below him was crawling with cheap carsâlikely inexpensive labor for whoever was running this place. Gremlins and Pacers unloaded crate after crate from a large cargo boat.

Then Finn heard the unmistakable sound of German engineering. A boxlike blue-green car, wearing a monocle, rolled onto the deck and began shouting orders.

“Too many cars here! Out of the way!”

Finn instantly recognized the car: Professor Z. He was a gifted German scientist whose specialty was designing weapons. He was also at the top of Britain's Most Wanted list. Professor Z was willing to do any workâterrible and destructive workâfor anyone willing to pay the right price.

“Here it is, Professor,” a Pacer said as he hovered next to a crate. “You wanted to see this before we loaded it?” Not even Finn recognized the American agent Rod Redline, working undercover as a Pacer.

Finn silently fired off a grappling hook and slid to the other side of the oil derrick. He watched as a forklift lowered and opened the mysterious crate. Inside was a TV camera packed as carefully as a brand-new windshield. The letters WGP stood out on its side.

Professor Z was most pleased. “Good, good,” he said with a thick German accent. “This is valuable equipment. Make sure it is properly secured for the voyage.”

Gremlins and Pacers surrounded the crate and began closing it up. Apparently, they were sending it away with the cargo boat. Finn made a note to himself to find out where that cargo boat was headed.

As the secret agent snapped photos, something else caught his attention. A crane lowered another large crate to the deck for Professor Z's inspection.

“Hey, Professor Z!” a Gremlin, aptly named Grem, shouted. “This is one of those British spies we told you about.”

Professor Z knew exactly who it was: “Agent Leland Turbo.”

Finn got ready to come out of hiding and fight.

A blast of flame from the oil derrick suddenly cast Finn's shadow onto Professor Z. The Professor made eye contact with his nemesis.

“It's Finn McMissile!” Professor Z shouted to his thugs, ordering them to chase down the spy.

Gremlins, Pacers, and other shoddy cars swarmed onto the catwalk closest to Finn. But Finn was faster and more agile. He shot out his cables, latching on to the crane standing tall above the deck. Nimbly, he swung out and drove straight up the crane's arm, away from the chase. The agent used every trick he could think of to escape. First he released some oil, causing his pursuers to spin out behind him; then he knocked over a stack of oil drums, blocking their path. But when Finn reached the helipad on the top deck of the oil derrick, there was nowhere left to go. The enemy cars surrounded him, their tinny engines whining like a swarm of mosquitoes.

Finn slammed into reverseâ¦and flung himself off the side of the oil derrick. He hit the water hundreds of feet below.

Gremlins and Pacers raced to stare down into the turbulent ocean. In a burst of splashing water, Finn surfaced and transformed into a sleek hydrofoil. He sped away from the oil derrick.

“He's getting away!” Acer the Pacer shouted.

“Not for long,” a combat ship replied as he released two missiles. The cars on the derrick watched as the missiles exploded. Finn's motionless silhouette drifted under the surface of the ocean. Shortly afterward, all four of his tires floated to the surface. Professor Z smiled and called off the chase. It had been a wonderful night. Both Finn McMissile and Leland Turbo had been eliminated.

“Now no one can stop us,” Professor Z told his grinning crew.

But he was wrong: Finn McMissile had transformed into submarine mode and purposely released his tires. As his enemies on the oil derrick turned away, Finn was speeding underwater to return to agency headquarters.

At the crack of dawn on the following day, halfway around the world, a rusty, dented tow truck named Mater had his eyes fixed on Route 66, smack in the middle of the U.S.A. Lightning McQueen was returning to Radiator Springs fresh from winning the Hudson Hornet Memorial Piston Cup race. Mater couldn't wait to see him.

Things had improved mightily since racing champion Lightning McQueen had made Radiator Springs his permanent home. Tourists visited regularly, and the whole dusty town had taken on a shine like a new coat of chrome. And no one enjoyed the reflected glory of Lightning McQueen's success more than his buddy Mater.

Lightning's girlfriend, Sally, was worried. She and Mater were the only two cars in town who were awake.

“That's 'cause I got a special surprise for him, Miss Sally,” Mater replied. “To celebrate his fourth Piston Cup win. And I want to show it to him first thing.”

“Okay,” Sally said, driving off. “At least move around a little. Your gaskets are gonna dry up. You're gonna leak oil.”

“I never leak oil!” Mater called after her.

But Mater had a bigger problem: he simply could not stay awake any longer.

Later that day, as Mater snored and snored, Lightning McQueen finally arrived home. All of Lightning's friends were gathered around, eager to see him. Sally nuzzled next to him. And, of course, there was Ramone, the owner of the body shop, and Flo, his wife, who ran the newly refurbished Wheel Well restaurant. Sarge and Fillmore were there, too. Sarge owned the surplus supplies store right next to Fillmore's, where the green-and-white van made and sold his own organic fuel. Lizzie, the old black car who owned the curio shop, was settled right next to Red, the fire truck.

Poor Mater had waited the longest for Lightning to return, and now he was missing the homecoming!

“He looks so peaceful,” Lightning said. “I don't want to wake him up.”

“Okay, move aside!” It was Mack, the big rig who drove Lightning to and from his races. “I've always wanted to do this.”

Finally, Mater drove right over a cliff! “I'm okay!” he shouted as all his friends raced to his rescue. He had already tossed his hook over a ledge and was climbing back into view.

But Lightning was concerned. “Wow, you just got yourself a nasty dent there, buddy.”

“That might be my best dent yet!” Mater said proudly. He grinned at Lightning. Mater's dents were a sign of friendship and of his many adventures with Lightning. He had gotten dents while tractor-tipping with Lightning, while pulling the race car out of ditches, and even while showing off his backward driving. He'd kept every dent he'd ever gotten as a way to remember good times with his best friend.

“Mater, it's so good to see you!” Lightning exclaimed as soon as he knew Mater was okay.

“You, too, buddy!” Mater shouted. “Oh! I got something to show you! You're gonna love it.”

“Actually,” Lightning said quietly, “I've got something to show you first.”

The Venetian by Mark Tricarico
The Billionaire's Hired Bride (BWWM Billionaire Romance Book 1) by Sherie Keys
It All Began in Monte Carlo by Elizabeth Adler
Hell's Belle by Biondine, Shannah
The Last Guardian Rises (The Last Keeper's Daughter) by Rebecca Trogner
Freakn' Shifters Bundle (3-in-1) by Langlais, Eve
Firestar's Quest by Erin Hunter
The Widow by Georges Simenon
Straddling the Edge by Prestsater, Julie
The Girl With Death Breath and Other Naughty Stories for Good Boys and Girls by Christopher Milne
Our partner