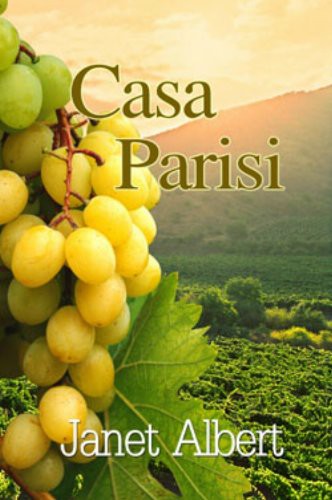 All rights reserved. No part of this publication may be reproduced, transmitted in any form or by any means, electronic or mechanical, including photocopy, recording, or any information storage and retrieval system, without permission in writing from the publisher. The characters, incidents and dialogue herein are fictional and any resemblance to actual events or persons, living or dead, is purely coincidental.

Find us on the World Wide Web at http://www.regalcrest.biz

This book is my way of celebrating the beautiful Finger Lakes winemaking region in central New York State. I've been there a lot and during one trip I read an article about a young female wine-maker from France. That got me thinking. Women winery owners and winemakers really are rare and I thought, wouldn't it be interesting if they happened to be lesbians and I wrote a story about them?

Although some places in the book are real and the facts about wines and winemaking are accurate to the best of my knowledge, the names of the wineries, the wines created at Casa Parisi, and the cast of characters, are products of my imagination. I was presented with a challenge when it came to the names, spelling and punctuation of wines and grape varieties. There were inconsistencies and variations, so to be as accurate as I could, I used the standards and guidelines suggested in my main reference sources.

I'm grateful to Cathy LeNoir and everyone at RCE who had anything to do with the publishing of this book. You've made my dream come true for the third time.

And, for the third time, I'm sending a hug and much gratitude out to Pat Cronin, my editor. You've taught me a great deal and I've enjoyed working with you. You'd say you were just doing your job, but you've done far more than that. Your genuine kindness and encouragement have meant more to me than I can ever put into words.

Thanks to Norma Serrato and Mary, for their time and valuable suggestions. Writing is an arduous task and no author can survive without the support of many people. Each of them offers something unique, no matter how large or small.

As always, thanks to my partner, Mary, for being supportive every step of the way. How fortunate I am to have you in my life.

Without the readers of lesbian fiction we would have no cause to write. Without the publishers, editors, and everyone else who does whatever it is they do to get these books on the market, we would have no literary culture. That would be a tragic loss.

This book is dedicated to my mother, Lucia. Thanks for teaching me to find pleasure in the simple things in life.

FOR LUCIA PARISI it was just another miserable Saturday night, one more night swallowed up by the ghostly remains of her past. Her life now seemed so different from the life she'd once had, the life fate had ripped from her grasp in one afternoon. On the horizon, her tomorrows stretched out like an endless succession of threatening storms and nothing in her life offered her the promise of sunny days ahead. The only thing she could do that made any sense at all was to sit on her favorite barstool at Ms. Georgie's, the one and only lesbian bar in Ithaca, New York, and watch as a steady stream of women poured through the front door.

The bar had become her safe haven, the one place she could run to when she needed to escape. It was a place with no connection to her past, a place that held no memories of hers within its walls. She could have done her drinking alone at home, in fact she would have preferred to, but some days stirred up more memories than others and this had been one of them. Every sound, every smell, every sight and thought had triggered additional rounds of mental torment until she felt she had no choice but to leave her house and drive down the road into town.

Mostly, she went to the bar to drink and to be with other women even though they meant nothing to her and she rarely spoke a word to any of them. But on certain nights when being alone became unbearable and she felt as though she might wither away from the lack of another woman's touch, she went there in search of something else.

In an hour or two, the place would be packed tighter than a city bus at rush hour with women from all the neighboring towns and that presented her with the prospect of finding someone she hadn't seen before and wasn't likely to run into again. She wasn't looking to find a lasting relationship or true love or even someone to date. All she wanted was a few hours of comfort in the arms of a stranger.

"Hey Bernie, I need another drink." Even though Bernie, the bartender, was directly in front of her, Lucia was forced to raise her voice so she could be heard above the noise. "Make it a double and don't put as much ice in it this time."

"Hey, yourself." Bernie turned and leaned on the bar. As usual, she was chewing the living hell out of a piece of gum. "Now listen, why don't you take a little break from the vodka and have a soda this time? I think you've had enough for a while."

"Clever comeback, as usual." Bernie glared at Lucia for a good ten seconds before she softened her expression. "Mind if I make a suggestion, cute thing?"

"You will whether I mind or not." Lucia studied the ice cubes in her glass. She'd heard how slurred her words had become, so she slowed her speech and made an effort to enunciate every syllable. "Go ahead. I'm always open to suggestions."

"Why don't you pace yourself? You'll live longer."

"What if I don't give a shit how long I live?" Lucia lifted her eyes. She hadn't really expected a comment, but Bernie's frowning face staring back at her spoke volumes. She had found Lucia's question outrageous and she disapproved.

Bernie took a few moments before replying. "That I have no trouble believing based on how you throw down one drink after another. Take a good look at yourself. Those pretty eyes of yours are hanging at half-mast and you have to prop your head up to keep from falling over."

As if on cue, Lucia's chin slipped off her hand and her entire body shifted sharply to the right. In the nick of time, she grabbed the edge of the bar and pulled herself into an upright position. "Fuck me," she blurted. "That'll wake you up."

"I'll bet it would." Bernie flashed a smile and then became somber.

Knowing Bernie was serious about how bad she looked, Lucia confronted her blurry image in the mirrored wall behind the bar. Everything Bernie had said was true. She was a frightening sight. With her fingers, she coaxed her messy brown hair into place. She'd been meaning to get a haircut and she now realized it had become an emergency. Judging by the dark circles under her eyes, a night or two of uninterrupted sleep wouldn't hurt either. After some eye rubbing and vigorous blinking she shook her head back and forth to clear the cobwebs.

"So, how do you think you look?" Bernie asked.

This time Bernie seemed amused. "You don't look that bad."

"Yes I do. You probably think I'm pathetic."

Before Bernie had a chance to confirm or dispute, a hand grabbed Lucia's shoulder from behind. "Try not to fall off that barstool. My insurance doesn't cover that."

Lucia turned to find Georgie, the owner of the bar, standing next to her. She tried to sound sober. "Bernie thinks I've had too much to drink. What do you think?"

"I think Bernie's right. She's always right about that sort of thing." Georgie hoisted her ample backside onto the stool next to Lucia's and draped her arm across Lucia's shoulders. "We ought to have your name engraved on that bar stool."

"Yeah, maybe you should." Lucia almost smiled but she couldn't. Georgie's remark, although meant to be light-hearted, had an underlying message that made her ashamed. A spark of insight gave her a mental picture of how she must look to them. She always sat on the same stool in the shadows and she always drank way too much.

"Why don't you take a break from the booze and drink some coffee, sweetie? I'll ask Bernie to get you a nice big cup. What do you say?"

"You think I should?" Lucia grabbed a fistful of Georgie's soft flannel shirt and fell against her lush, full-figured frame. With her head on Georgie's shoulder, she inhaled her spicy, slightly smoky scent and sighed.

"I do," Georgie said, making eye contact with Bernie. "Get our friend some coffee, will you? I just made a fresh pot. Make it black and use one of the big mugs." Georgie lifted her arm from Lucia's shoulders, pried her shirt from Lucia's hand and helped her straighten up. "See you don't fall off of that barstool, you hear me?"

"I hear you, Georgie." Lucia raised her hand to smooth her hair.

"Listen sweetie, it's Saturday night and this is the only lesbian bar in Ithaca, so I've got to get back to work before it gets too crazy in here. You're gonna hang around for a while, am I right?"

"Right. And I happen to know what night it is, thank you. That's why I came here." Lucia focused on Georgie's kind face as she showed her what she hoped was one of her sexiest grins. She winked at Georgie trying to appear cool but knowing she looked more like a damned fool. "Booze and sex, that's how I get through the night."

"If I were you, I'd go easy on the booze and the girls. Too much of either one can get you into a whole mess of trouble. Take it from one who knows." Georgie's deep laughter rumbled and rolled out of her like thunder as she slid off the stool.

"I hear you, Georgie." Lucia couldn't help but laugh.

"I mean it. You shouldn't be hooking up with anyone, drunk as you are. Lay off the drinks for a while and when Bernie brings you that coffee, you drink every last drop of it, you hear me? It's on the house. So's the advice which I'm sure you'll ignore as soon as I get out of your face."

"Why are you always looking out for me?" Lucia asked.

"I don't know. I guess I kind of like you. You seem like a nice person--a bit moody maybe--but nice. It's just that I hate to see you in here all the time drinking like there's no tomorrow, is all."

"Don't worry about me." Lucia waved her hand dismissively. "Waste of time." Lucia stared at the surface of the bar. For her there were no tomorrows worth living.

"You're no waste of time." Georgie rested her hand on Lucia's back.

"Yes I am. You don't know. " Lucia slowly shook her head.

"No I don't know. And I also don't know why you say that about yourself. You're just having a bad patch and you're drunk. You're not thinking clearly."

THE BRO-MAGNET by Lauren Baratz-Logsted
Second Fiddle by Siobhan Parkinson
DEAD: Reborn by Brown, TW
Amanda Ashley by After Sundown
Edible Delectables by Amy Wiseman
Time Bomb by Jonathan Kellerman
The Heroes of Olympus: The Demigod Diaries by Rick Riordan
Abracadabra by Ashley Ladd
Crimson Sky: A Dark Sky Novel by Amy Braun
The Everything Box by Richard Kadrey
Our partner