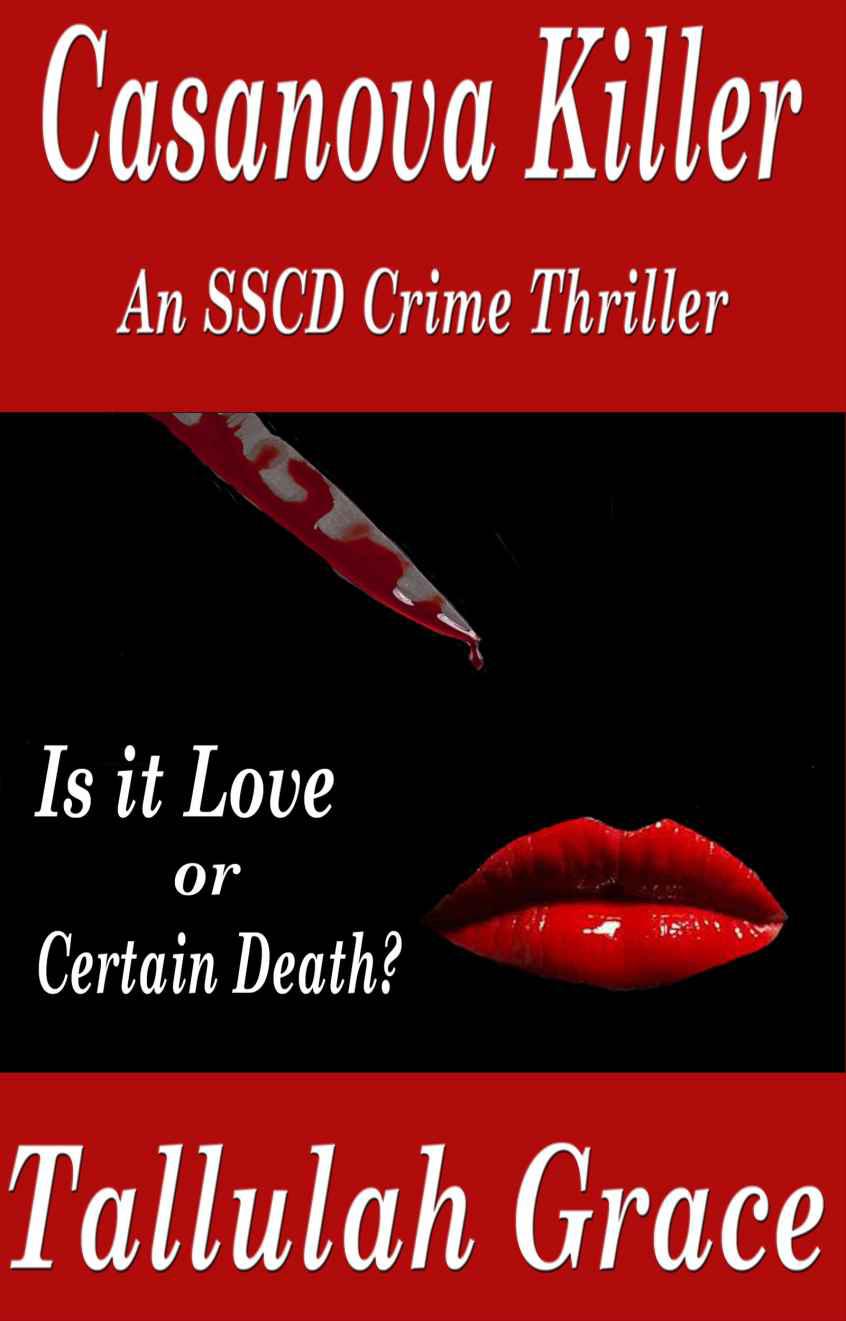 The names, places and events contained within this book are fictional. Any resemblance to actual persons, living or dead is purely coincidental.

All rights reserved. No part of this book may be reproduced or transmitted in any form or by any means, electronic or mechanical, including recording, photocopying or any other information storage and retrieval system without prior, written permission of the Author.

Visit
this page
to subscribe to my newsletter and be the first to learn of new releases, contests and giveaways.

Casanova Killer takes place a year before the Timeless Trilogy. So many readers wanted more about Dylan, that I created this book to lead give us a peek into his life as an FBI agent. This step back in time also showcases Jerry as his partner, showing us why she’s a little in love with Dylan and gun shy about men in general.

Jerry (Jeri) takes center stage in the remaining novels of the SSCD Series.

Other Works by Tallulah Grace
.
116

The sapphire waters of the Pacific churned into frothy white spray against the rocky coastline of Muir Beach.

“It’s like a painting,” Jenna remarked as she removed her strappy sandals. The planked boardwalk outlining the cliff ridge high above the shore did not appear friendly to stiletto heels, especially ones that cost more than most monthly mortgage payments.

“Wait until you see the view from the point.” The man she knew as Robert smiled and held out his hand. She took it.

The first coral streaks of sunrise complemented the ever-brightening blue water as they strolled along the snaking walkway. The majesty of the landscape was theirs alone, for the moment.

Jenna sighed. It had been a magical evening; dinner at a new bistro followed by dancing at the exclusive Portman Lounge. Robert knew how to treat a woman. His impeccable manners and attention to her every whim reaffirmed her decision to cheat on John, her lover of several years.

Long used to the finer things in life, courtesy of her married lover, Jenna especially enjoyed being visible on a man’s arm in the city that she loved. John gave her the lifestyle she craved, but hidden rendezvous and trysts tailored to his schedule soon grew tiresome. Meeting Robert changed all of that.

The timing couldn’t have been better, she marveled once again. John had no sooner left on a weeklong business trip than Robert had appeared by her side. His natural charm, movie-star good looks and British accent drew her to him immediately. The Rolex shining from his wrist and the Maserati he left parked at the curb didn’t hurt either. The past week had been a whirlwind of sightseeing adventures, prosaic phone calls and romantic evenings. Jenna was head over heels.

As the blunt end of the walkway came into view, Jenna’s Robert congratulated himself on a flawless execution. The past few days had been perfect; the woman beside him practically oozed her adoration.

“Ooh, I wish I’d brought my camera,” Jenna skipped the last few feet, pulling Robert along behind her. “The view is stunning!”

“It certainly is,” Robert’s voice warmed her even as his breath tickled her neck. Standing close to her back, he wrapped one arm around her waist and pulled her against him. She wiggled against his erection, just enough to let him know that she noticed.

The sound of the waves, crashing against the rocks below and the ever-constant wind masked the snap of the stiletto blade opening.

“Till we meet again, my sweet.” He murmured and quickly drew the blade in a single line across her throat. With no more effort than tossing garbage into a pail, he flung Jenna’s body over the wooden rail to the sea below.

“Get your size fifteens off my desk, Dawes.” Nate Banks scowled at the man lounging in his office.

“Sorry, Boss.” Dylan Dawes replied automatically as he passed a hand over his eyes and slowly straightened. “Just catching a few winks.”

“You can sleep on the plane.” Nate tossed a file into Dylan’s lap as he passed. “We leave for California in an hour.” The desk phone beeped loudly as he depressed a single digit. “Jerry, my office,” he barked into the speaker not waiting for a reply.

“What’s up?” Dylan asked, opening the folder, his fatigue forgotten at the prospect of a new case. The team had just wrapped the nasty business of chasing one Michael Phillips across three states. The self-proclaimed Phantom had eluded them for two months, killing sixteen teenagers in the process.

They were due for a break, but as one of the few teams the FBI trained in profiling and tracking serial killers, the Special Serial Crimes Division rarely knew any downtime.

“What’s up, Boss?” The female voice echoing Dylan’s question preceded the woman into the room by scant seconds. Jerry Forbes, Dylan’s partner and friend, dropped into the second chair facing Nate’s desk. Dylan, long accustomed to her striking beauty, shook his head at the bright sparkle in her eyes.

“How can you be so perky? We’ve been up for three nights straight!” He grumbled, then grimaced when she poked him in the arm.

“One of the benefits of youth, old man.” She teased, even though Dylan was only a few months older than her. Turning to Nate, she became serious. “What’ve we got?”

“Three women murdered, in and around San Francisco. Throats slashed, bodies left in remote areas. All of the victims were affluent brunettes, aged twenty-five to twenty-nine.” Nate recited the facts. “The last one was found yesterday, much quicker than the others. She’d only been dead for six to eight hours. The other two went undiscovered for seven and twelve days, respectively. No DNA evidence on any of the victims, thanks to the time lapse and the weather conditions in the area. Finding the latest victim so quickly gave us our best shot at DNA, but it rained most of the day, washing away whatever might have been present on the body.”

“Was the discovery a lucky fluke, or do you think he’s getting bored with waiting for notoriety? Jerry asked.

“Hard to say. He tossed her over a cliff leading down to the Pacific. The spot is a popular viewing point for tourists and locals alike, but theoretically she could have lain there for weeks without being noticed.”

“Who found her?” Dylan asked.

“A local news team doing a touristy-type puff piece flew over the area in a helicopter. A flash from a crystal on the dead woman’s shoes caught their attention. Before they realized it, they’d broadcast the woman’s body live to three counties.”

“You know it. Never underestimate the public’s fascination with a gruesome murder. Anyway, it establishes the pattern so we’re on it.” Nate sat back, templed his fingers and looked at Jerry. “We need you undercover on this one.”

“You’re his type: tall, beautiful, brunette. Now we just have to turn you into a socialite. Oh, and a mistress.” He tried to hide his grin as he watched the meaning of his words sink into Jerry’s consciousness.

“Socialite? Me?” Jerry shook her head. “Mistress I can handle, no biggy, but a socialite?” She leveled an incredulous gaze at first Dylan and then Nate. “I don’t really have to go to parties and all that stuff, do I?”

“You’ll have to live your cover, you know this.” Nate stood, bringing the meeting to an end. “Don’t worry, you’ll be fine.”

“Easy for you to say, you grew up fancy, I didn’t.” Jerry grumbled as she walked to the door.

Dylan laughed. “I find it curious that you’re more comfortable playing a mistress than you are in the role of a social butterfly. Anything you want to confess, Forbes?”

“Bite me, Dawes. At least you don’t have to get all dressed up and make small talk with highfalutin strangers, or does he?” She asked Nate.

“As a matter of fact, yes, he does. Every mistress needs a keeper.” Nate’s eyes crinkled at the expression on Dylan’s face.

“Come on, Boss, you know I hate that crap. With your background, you’d be perfect as Jerry’s keeper.” Dylan flashed a grin at Jerry, knowing that she’d hate the terminology. “You grew up in that world, tossing Jerry and me into it is like serving hot dogs at the opera.”

“My background is the problem. I know people in the circle you’ll be infiltrating. They know me. The unsub is likely part of that group; we don’t need to spook him before we get a handle on his identity.” Nate stopped before entering the hallway and turned to face his agents. “You’ll both be fine. Don’t let the cover get in the way of the mission. The unsub thinks he’s untouchable; he’s already stalking his next victim.”

“You said the victims were affluent. Do you mean they’re wealthy in their own right, or wealthy thanks to their benefactors?” Jerry looked pointedly at Dylan.

“The latest victim was solidly middle class, but her married ‘benefactor’ kept her in style, complete with a six figure bank account. The first victim’s expenses were covered by a corporation, one that her companion owned. He’s not married, she came from old money, so their arrangement could have been a social tit for tat.” Nate nodded at the folder Dylan held. “Uncover the circumstances for the second victim’s lifestyle. We should know if ‘mistress’ is truly part of the victimology or if it’s a by-product. Good question, Jerry.”

Nate nodded. “Get packed, guys. Wheels up in forty-five.”