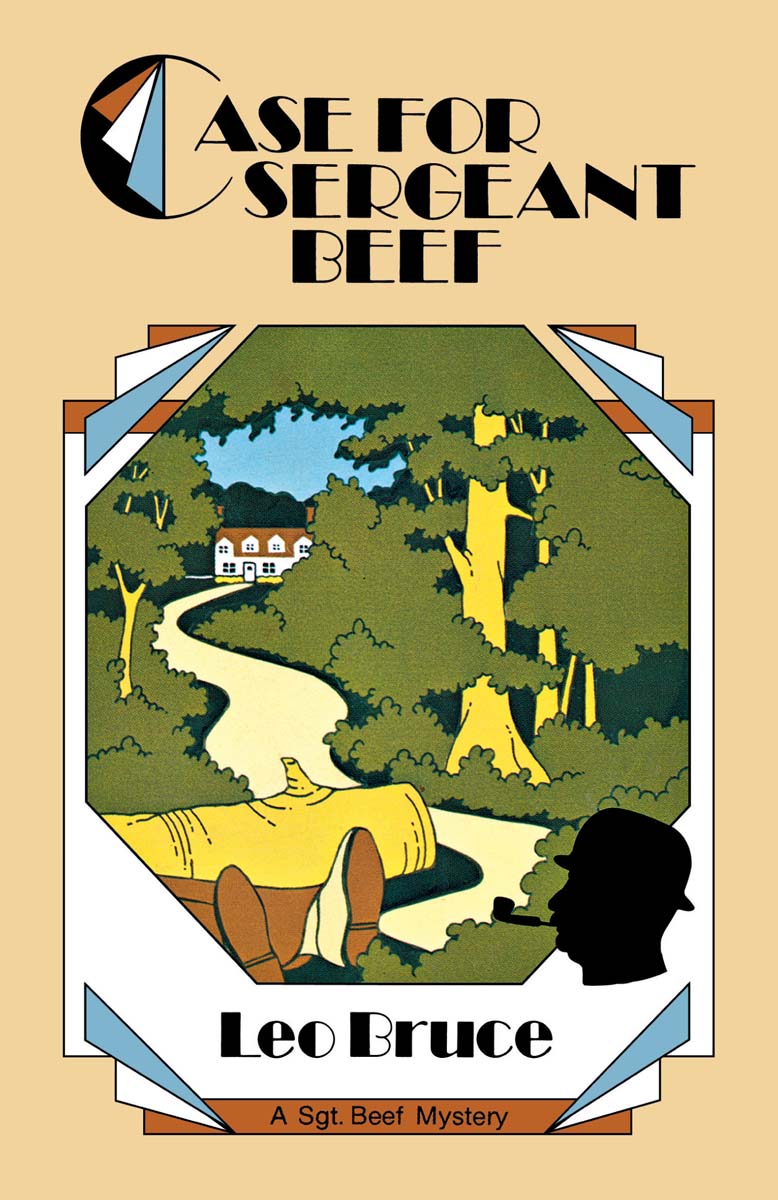 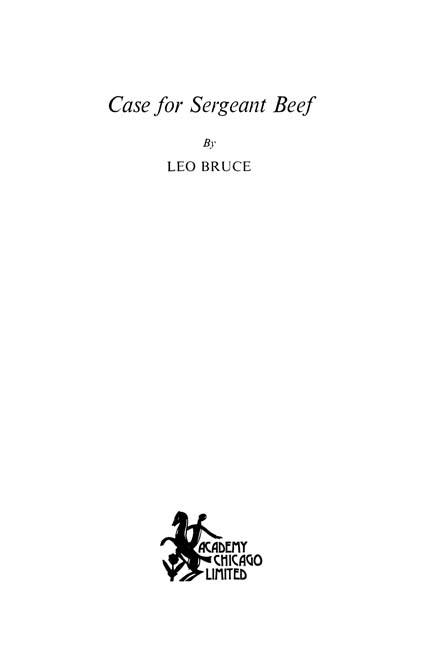 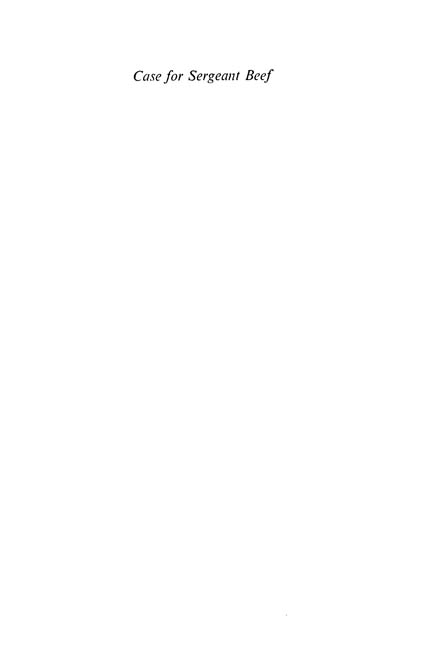 Reprint of the 1975 ed. published by I. Henry Publications, Hornchurch, Eng.

1 By Way of Preamble

10 Flipp was not at Home

14 Elevenses with the Curate

18 A Lawyer and Some Boy Scouts

25 Chatto gets his Warrant

CHAPTER ONE
By Way of Preamble

I
HAD
made up my mind to have no more to do with murder. Before the war I had faithfully chronicled the investigations of Sergeant Beef into five mysteries and had enjoyed watching him, whose great quality as a detective was his sturdy common sense, find his way among the maze of evidence and eventually, and always, get his man.

When I had first met him he had been no more than a village policeman, and it was my ability to record his work in a series of novels which had raised him to the level of a famous investigator. But he had shown little or no gratitude and had frequently complained that the books I had written about him were not widely enough read. So now that the war was over and I had decided to abandon the work of a crime novelist for the more secure and profitable profession of marine insurance, I had no scruple in telling him so. He had never appreciated me, I felt, and I wondered whom he would find to replace me as his Boswell.

Whoever it might be would have no easy job. For Beef, burly, red-faced, heavy of hand and humour, with that dark ginger moustache of his which straggled over his lips and looked as though its tips were nourished on beer, with his portentous announcements and his irritating complacency, was not a man to appeal to the great public as an inspired investigator. And although I had to admit that he always
did
find the answer where others failed, and that under his solid exterior there was something akin to genius, and that he had a kind of boyish enthusiasm which was very infectious, still I rather wondered whether he would find another writer to take him up. The fashion was for detectives of high social standing and large private incomes, while Beef was dependent on what he actually earned in his cases.

At any rate, I had had enough. It is true that I had not
seen
very
much bloodshed during the war, though as an officer in the R.I.A.S.C. I had been, as they say, not a thousand miles from the fighting, but still I felt I wanted a rest from murder, and I decided to tell Beef frankly that if he intended to return to detection he would have to find a replacement for me.

I had heard from him once or twice during the war. He had joined the Special Investigation Branch of the Corps of Military Police, and had doubtless had his little successes in tracing missing stores, examining questionable imprest returns and arresting officers who had written phoney cheques. I was prepared to find him just as pleased with himself as ever. And I set off on the afternoon of New Year's Day to see him, break the news of my new profession, and wish him luck in finding my successor.

His home he had found before the war when he had first retired from the Force, and was lucky enough still to possess intact. I smiled as I remembered his first search for it, and his insistence that it must be near Baker Street, which he described as the Harley Street of detection.

âNever do to be out of the swim,' he said, and when he had settled in his house in Lilac Crescent he had stuck up an absurd brass plate with
W. Beef: Investigations
on it in giant letters. I was not surprised to find this in its place, and freshly polished, when I reached his house that day.

He opened the door himself and greeted me with his big slow grin.

âHullo,' he said. âI was wondering when you'd turn up. Come along in. And a happy New Year!'

He led the way to what he always called his âfront room', a place of Spanish mahogany, sentimental engravings, and an atmosphere in which the stale smoke of Beef's pipes blended with the last meal eaten at the plush-covered table.

Beef pointed to a horse-hair chair for me and slowly lowered himself into his own favourite one, then lit his pipe.

âI suppose you've come round to see if there's anything doing in the way of a murder story for you to write?” he grinned.

I explained rather tartly that I had come for nothing of the sort, that I had quite made up my mind to have nothing more to do with detection.

âThat's all right,' he said, as though I had been apologizing. âI can soon get someone else to write up my cases. I shouldn't be surprised but what it mightn't be just as well, all things considered.'

âWhat exactly do you mean by that?' I asked icily.

âWell, you never made much of a success of it, did you? Not to say
success,'
he added.

âI don't understand you, Beef,' I retorted. âWhen I met you you were a village policeman.
I
turned you into a famous detective. I wrote each of your cases.'

âBut who worked them out?' asked Beef with a triumphant grin. âWho found the answers?'

âI'm not denying that you did. But you should understand that it's no use being a good detective nowadays unless you've got someone to write you up. Publicity's the thing.'

âThat's what I say,' said Beef. âAnd I want someone who'll give it me. I solve the mysteries, don't I? Have I ever failed? I ask you. And some of them have been pretty tricky and left the Yard wondering. But what do I get? A few copies of your books in the lending libraries. My wife's sister who's always reading, always got her nose in a book she has, says that the young lady at the library she goes to has never heard of Sergeant Beef. What do you think of that?'

I was too angry to speak at first. Then I said ironically ââI suppose
I'm
to blame?'

ââCourse
you are,' said Beef. âWhy, I ought to be right up with the top-notchers now. Lord Simon Plimsoll and M. Amer Picon and them. I get at the truth just as clever. don't I?'

âYou may,' I admitted. âBut you lack the polish, Beef. These modern detectives are mostly related to Dukes, or if not they
know
everyone. They're welcomed in the best houses. They're always invited to those house-parties at which all the best murders happen. Not to put too fine a point on it, Beef, you're crude. Rough and ready. Bourgeois.'

âNow you're coming to it!' said Beef. âThat's why I'm not as famous as the rest, is it? Class distinction, again. Well, if that's the case it's your fault. You ought never to have made me out no more than what I was. Suppose you'd written me up as Lord William Beef. What then? We'd have had them reading fit to bust themselves.'

âPlease don't be nonsensical,' I said, for I saw the satisfied grin on his red face.

âWhat I need is someone to take me seriously,' he said. âIt's no good you trying to make people see I'm a great detective if you're giving them a laugh half the time.'

âI write about things as I see them,' I said.

âLiterary conscience, eh?' laughed Beef. âAll I can say is it doesn't pay.'

âAt any rate, you needn't worry any more,' I said bitterly. âYou are certainly at liberty to find someone else to record any further cases you may get. Someone who'll present you as slim and aristocratic, with a keen eye and excellently cut clothes, if you like. I'm going to do other work.'

âWell, that's your business. I dare say it will pay you better. You're not really cut out for writing, are you?'

I treated this with silent scorn.

âNot according to some of the reviewers you're not, anyway,' concluded Beef. âStill, it's a pity in a way, particularly just now.'

âWhy just now?' I could not help asking.

âI couldn't be less interested,' I said, using, rather effectively, I thought, some of the idiom I had learnt in the army.

âNo? Well, that's all right. Because if this case is what I think of it, it's serious. Nasty. Murder, or suicide that's been forced on a man to make it almost murder in itself. And I want to get at the truth with no larking about.'

âAre you inferring that
I
have ever done any “larking about”, as you call it, while we have been investigating?'

âNo, but the way you've told the story anybody would
think that I had. This case is serious. It wants serious handling. So perhaps it's just as well that you're not going to write it up. Still, you may as well stay and have a cup of tea.'

Frankly I did not know what to do.

âWhat is her name?' I asked Beef.

âThe name of the lady who's coming to see you.' âMiss Shoulter.'

It meant nothing to me. I had not been studying the news of crime in newspapers lately.

âShe's the sister of a man found dead in a wood in Kent last week,' said Beef.

âWell, what do you expect? Frills on? He was dead, wasn't he? Shot with a
12
-bore. Half his head shot away. What more do you want?'

I was about to say that I wanted nothing except to start my daily work in a quiet office. But at that moment the front-door bell rang and Beef went out to return a moment later with Miss Shoulter.

âThis is Mr Townsend,' he said, âwho does the clerical side of my work. Miss Shoulter.'

I was furious, but I managed to conceal it as I shook hands with Beef's client.

The Perfect Present by Morgan Billingsley
Sins of a Duke by Stacy Reid
Jack County Demons by AK Waters, Vincent Hobbes
Broken Promise (The Broken Ones Book 3) by Jen Wylie
Forget Me Not (From the Files of Madison Finn, 21) by Dower, Laura
Homicide in High Heels by Gemma Halliday
ChangingPaths by Marilu Mann
Did Not Survive by Ann Littlewood
Studio Sex by Liza Marklund
Beaches and Cream by Kojo Black
Our partner