Read Case with No Conclusion Online

Case with No Conclusion 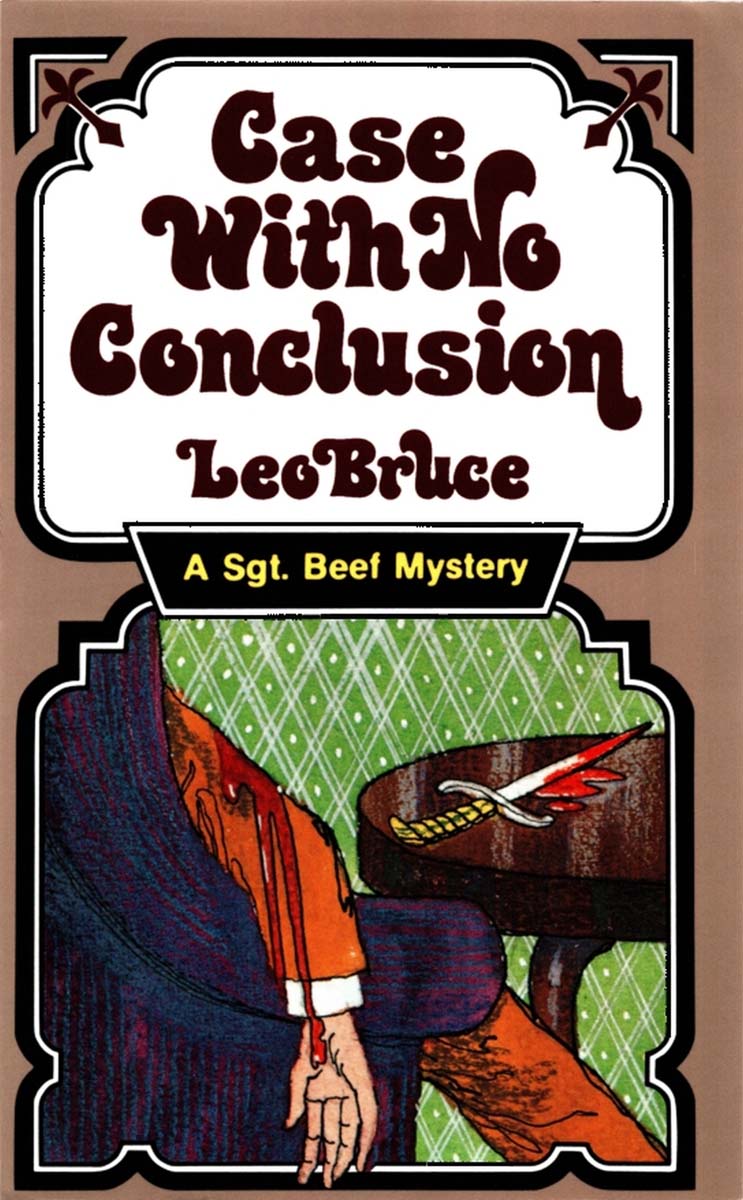 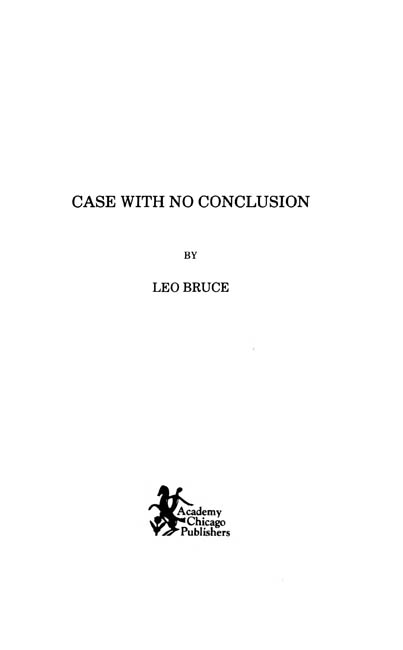 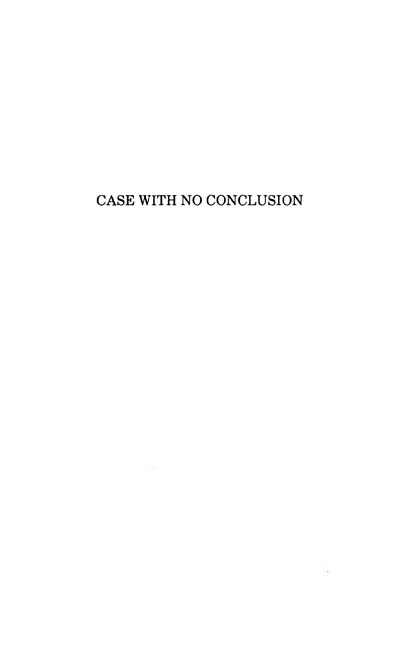 Printed and bound in the U.S.A.

No part of this book may be reproduced in any form without the express written permission of the publisher.

Case with no conclusion.

TO
BOB AND WINIFRED PARKER

I
STARED
gloomily at the piece of notepaper. Really there seemed no end to the ingenuous ambitions of my old friend Sergeant Beef. He had already hinted to me that he was thinking of retiring from his post as a country police sergeant, but I had never dreamed that the luck he had had in stumbling on the solutions to a couple of murder mysteries would lead him into anything of this sort. The notepaper was headed W. Beef, and underneath were these extraordinary words: “Investigations promptly executed. Estimates given. Secrecy, swiftness, security.” On the right of the paper was a London address, and on the left a telephone number.

Poor old Beef! A picture of him in his blue uniform at once rose to my mind. His straggling ginger moustache which always looked as though it had been dipped all too recently in beer, his irregular teeth and his air of mild remonstrance, his slow movements and his stolid way of thinking, marked him at once as the type of policeman likely soon to be superannuated by a Force full of zestful public-school boys. That he should have kept his job at Braxham had surprised me, for his fondness for the local pubs was a byword. That he should have been the means of tracing two murderers was a
miracle. That he should be able to earn a living as a private investigator was beyond all human credulity.

However, there it was, and his letter followed. Written across his inferior notepaper in his large sprawling handwriting I read that he would like me to call on him as soon as possible. Concerned for his wife, a plain and sensible woman whose only ambition had ever been a clean cottage, plentiful meals and a gossip with her friends and relations, I decided to call at the address given.

I arrived there one afternoon at about half-past two, those doldrums of the day when lunch is finished and half-digested and it is not time for the reanimating cup of tea. Mrs. Beef opened the door of one of those small, two-storied, black, brick-built houses that may still be found in unlikely back streets between Baker Street and Paddington. Children were playing down the road, and the little front doors and closely curtained windows marked this unmistakably as a street in which bus conductors, workmen, postmen, and perhaps shop-assistants, whose work was in the Edgware Road area, had been lucky to find a small house for themselves. It was the last place in the world to which anyone looking for a private detective would come, even in answer to an advertisement.

“Beef'll be round in a minute,” said his wife. “They close at half-past two,” she added significantly as she showed me into the small front room.

“Oh, well,” said Mrs. Beef, “it may give him something to do now he's retired. He's got a bit put by anyway, you know, and I don't see it does anyone any harm for him to call himself a private investigator. Though what he wants to get mixed up in murders for I don't know. I don't mind reading about them in the papers. But further than that I won't go.”

“Cases? No,” said Mrs. Beef. “âCourse he hasn't. But he's started spending money putting advertisements in papers and says something'll come along soon. I can't help thinking you're to blame, Mr. Townsend, writing up those other two affairs as you did into books. It's given him such an idea of himself. Though I told him you were laughing at him half the time.”

“What we've got to remember,” I said, smiling, “is that he did actually discover the murderer in each case.”

“Oh, wellâ¦” said Mrs. Beef finally, “there you are. You never know. It's a funny businessâ¦.”

“Quite,” I interrupted, before she should reflect that life was what you make it, or that you never could tell.

Just then the front door opened and in a moment Beef was with us. I had never seen him out of uniform before, for in the old days he had preferred
his blue tunic which, he said, he was “used to, for playing darts.” The sight of his bright blue serge suit and mauvish tie rather embarrassed me. He held out his big red hand.

“Glad to see you,” he said without smiling; “there's several private things I want to talk about.”

This last remark was evidently his delicate and tactful way of suggesting that Mrs. Beef should leave us, for she immediately walked out of the room.

“Beef,” I began at once, “what on earth is the meaning of all this? Do you really suppose that you can make a private detective of yourself?”

“Make?” he said, “I'm a born detective. And you should know it if no one else doesn't. I remember that time when the milk was disappearing off the doorsteps soon after I'd started in the Force. The Superintendent said to me then that I was a regular sleuth. A regular sleuth, he said, and no mistake about it.”

I sighed, for the old boy's vanity made him invulnerable to sarcasm or contradiction.

“But what about your cases?” I asked; “Mrs. Beef says that you've been spending money on advertisements and nothing's come to hand. How do you account for that?”

Beef sat down heavily in a plush armchair, pulled out his pipe and turned to me.

“That's just what I wanted to see you about,” he said; “I don't mean to say nothing rude, but I can't help thinking that if anyone's to blame, it's you.”

“Me?” I began indignantly, but he held up his hand.

“Yes,” he said, “the way you wrote up those cases. It was almost as though you were trying to make a fool of me. I got the murderers, didn't I? What more do you want?”

“There's no such thing as luck in this work,” said Beef. “Didn't Stute say so himself when he came down from Scotland Yard? It's method, Mr. Townsend. My methods are simple, but they work. I don't believe in a lot of skylarking about with microscopes and using half the inventions of Scotland Yard to sort out a little bit of evidence what anyone could see through with half an eye in their head. And there it is. I've arrested these two, and all I got from you was remarks about my being a simple country policeman. Then the way you put my language into print won't do neither.”

“But after all, Beef,” I said, “I only reproduce your dialect as accurately as possible. You're not a true Cockney, and I went so far as to explain that you spoke as Cockneys spoke in the home counties.”

“Dialect,” said Beef disgustedly; “it's nothing short of personal the way you have it printed. You should read the newspaper critics. You saw what Mr. Milward Kennedy said. âTedious' he called it, the misspelling and that.”

“If ever you have another case,” I assured him, “and I have to report it, I promise you your language
will go in with all its aspirates, and none misplaced.”

“I'm not sure you're the one to report it,” said Beef. “You don't seem to make much
of
my cases. Not what some of them do for their detectives.
Case Without a Corpse
never hardly got no notices at all in the newspapers. Not like Miss Christie, or Mr. Freeman Wills Croft. They do get taken notice of. All you got for me was a bit in the
Sunday Times,
and not a smell from the
Observer.
A couple of paragraphs in highbrow papers like the
Spectator
and
The Times,
and there you are.”

“I don't know whether that's quite fair,” I said. “What about Raymond Postgate in
Time and Tide?
He called me the âthriller reviewer's comforter.' ”

“Only because you try and sneer at the others as writes detective stories what sells hundreds of thousands more than whatever you will. Why can't you make me famous? Like Lord Simon Plimsoll and those. I'm just as sure to get the right man in the end, aren't I? See where it comes in when a real good case comes along what really might help me to build up a connection, I don't get it. âCourse I know the competition's there. There's hundreds of them after anything unusual. There was that nice little case the other day, for instance, that would just have suited me. Body found in a brewer's vat. And who got the job? Nigel Strange-ways, of course, Nicholas Blake's detective. And what about that kidnapping business down at
Kensington? It would have been handy for me, but Anthony Gethryn was put on to that because he's got Mr. Philip Macdonald to write him up. Where were we, I'd like to know? Then again, what about Fashion in Shrouds? Lovely, that was. Murder in a fashionable dress-designer's in Mayfairâ¦.”

“But, Beef, surely you're not going to suggest that you would have been the man to investigate that case? It needed delicacy, tact,
savoir faire.
It was obviously just right for Miss Margery Allingham's Albert Campion.”

“But I shouldn't half have liked it,” said Beef, “mannequins and that,” and he gave me a gross wink. “I never have any fun. Doctor Gideon Fell got that interesting little business of the two corpses in a hotel, with John Dickson Carr to tell the story. Why, even my cousin does better than I do.”

“Oh, you didn't know there was another Sergeant Beef? Of course, he's only an assistant to John Meredith, but he gets some interesting cases too. And you know why? Because Francis G6rard writes them up, and not someone like you who's only thinking how he can make jokes at my expense. Yes, my cousin Matthew Beef was telling me the other day, âWilliam,' he said, âwhat you want is a first-rate man to write your stories, like Mr. Gerard does ours. That Townsend's no good,' he said, âhe's trying to be clever half of the time.' You see what's being thought.”

“No, it all comes down to the same thing: I'm wasting my time. I need someone who can show I've got brilliance, insight, intuition, psychology, and all those remarkable things the others are supposed to haveâthough they don't work out anything more difficult than I do. It's disheartening, that's what it is.”

“I'm sorry, Sergeant,” I said, because I couldn't really be angry at this absurd tirade. “If ever you should get another case we must see what we can do.”

“Of course, I shall get another case,” said Beef. “What do you think I've put advertisements in the papers for and my name on that door? Don't you know what happens? A mysterious stranger comes up, hot and perspiring with anxiety, tells me his wife's disappeared, and Bob's your uncle. You ought to know.”