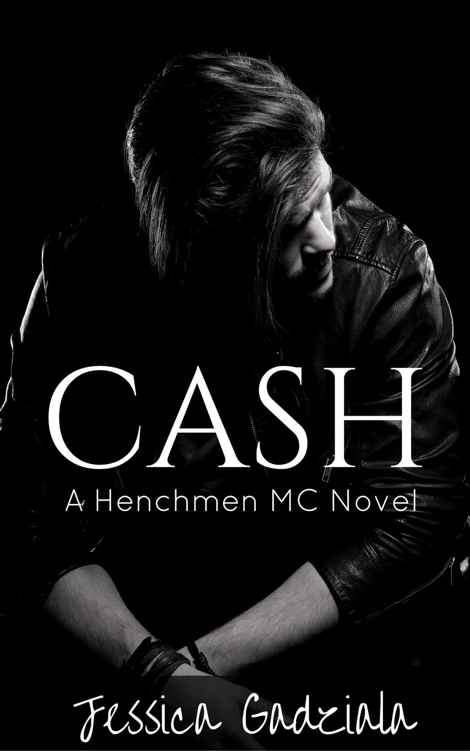 Copyright © 2016 by Jessica Gadziala
All rights reserved. This book or any portion thereof
may not be reproduced or used in any manner whatsoever
without the express written permission of the author except for brief quotations used in a book review.

"This book is a work of fiction. the names, characters, places and incidents are products of the writer's imagination or have been used fictitiously and are not to be construed as real. Any resemblance to persons, living or dead, actual events, locales or organizations is entirely coincidental.”

To my GoodReads ladies who kept (and keep!) me motivated:

Dianne, Sabrina (x3, the three of you)

Reign had church at the compound like he did every Friday. He had left ten minutes before, dropping a nine millimeter on the kitchen counter beside me and kissing down the side of my neck.

“Give me an hour then you get your ass in the truck and drive to the compound,” he said, squeezing my ass before he moved away.

I listened to his bike rumble off as I looked down at the gun. Reign wasn't exactly a romantic and I never expected that to change. But he showed me he loved me in his own ways - like when he left me alone but always made sure he left me with a gun. It was his version of flowers and candy. Protection. Safety. They were some of the things I came to appreciate most about being with him. I may not be some withering flower, but it always gave me the warm and tinglies to know that he prized me enough to want to make sure I was always safe.

The abrupt
tap tap tap
on the sliding glass door in the dining room had my heart flying into my throat and my hand automatically grabbing for the gun, pulling off the safety, and aiming it into the darkness.

I moved slowly out of the kitchen, reaching my free hand into my back pocket for my phone and hitting Reign's number.

Whoever was at the door was in all black, making them all but invisible in the darkness. But then a white hand slid out of the sleeve and reached upward, pulling the hood off their head.

Janie.
From Hailstorm, the survivalist camp on the hill. I had met her a little over a year before when she and her leader, Lo, helped Reign, Cash, and Wolf save me from the skin trading psycho called “V” who had kidnapped and tortured me for months to try to get my father to agree to some kind of deal involving using my father's shipping containers. V had been under my father the cocaine kingpin's care (read: imprisonment) since then. My dad and I had managed to make amends despite him lying to me my whole life about being a normal, upstanding businessman. Hell, who was I to judge? I fell in love with a gun running biker who had proved quite adept at taking lives.

But ever since that night, I had never even caught sight of anyone from Hailstorm. Not even Lo. From what I could tell, Reign and the others hadn't heard from them either.

Janie being at the backdoor... I had no idea if that was good or bad.

“Babe... the fuck could you need to talk to me about already? I just left...” Reign's voice found my ear.

Janie's eyes found mine and she said something while watching me, most of which I couldn't make out. But I caught one word.
Help
.

Then she pointed to the phone by my ear then brought her finger to her lips in a shushing motion.

I didn't do that. I didn't keep things from Reign. That wasn't how our relationship worked. But there was a woman who once helped save me at my back door asking for help and asking me to keep it quiet.

“Oh, oops,” I said into the phone, trying to sound flustered. “Sorry. I didn't mean to call you.”

There was a short pause. “You sure? Everything alright?”

“Yep fine. Just trying to crack the code to the safe and find the fun guns,” I said, teasing him.

“Summer I swear to fucking Christ if you touch one of the...”

“I'm joking,” I laughed, rolling my eyes as Janie watched me, head tilted to the side. I still had the gun aimed at her. Maybe she saved me once, but I learned my lesson in blindly trusting people.

“Wouldn't put it past you,” Reign grumbled, likely remembering the time he let me use a fully automatic AK for the first time. I hadn't realized how much of a kick it would have and ended up stumbling and accidentally shooting the side of the compound. No one got hurt or anything, but he never let me live that down.

“Promise me there won't be any new holes in my house when I get there.”

“No promises, but it's unlikely.”

Reign sighed and I could just picture him raking a hand down his face. “Alright. I gotta go.”

“Love you,” I said, the words still heavy with meaning. It wasn't the flippant
love ya'
people fed each other to end a phone call. I meant it. I felt it down to my bones. And my words echoed that.

“Love you too,” he said in a matching tone before he hung up.

I took a deep breath, tucking the phone back into my pocket and walking toward the back door. I flicked on the porch light and reached for the lock. As she reached for the handle, I backed away, gun still raised. I was good with a gun, so was Janie, but she had me beat on any other kind of fight. I wasn't letting her get near me until I knew what was going on.

“What are you doing here?” I asked as she walked in, closed the door, and sat down at our dining room table like she had done it a hundred times before.

“I'll call Reign back...” I started, reaching for my phone.

“No,” she said, almost a little hysterically. It was such an unexpected, out of character tone for her that I froze.

“I can't tell you that without getting you involved. But I need you to do something without telling anyone that I have asked you to do it.”

“You want me to lie to Reign?” Again.

“Yes. But it will keep him safe. And Cash, Wolf, the rest of the Henchmen, and your dad.”

My dad? And all of the Henchmen. Christ. What the hell did she get herself into?

“Does Lo know about this?”

“No,” she said, her blue eyes boring into mine as she ran a hand through her long dark hair. “And she can't know.”

“Janie...” I tried to reason, noticing a slight tremble in her words. If she was doing something on her own, without Lo and the rest of Hailstorm behind her...

“I just need you to invite your dad, Cash, Wolf, and Lo here one night, Summer. That's all I need from you. Just throw a fit until they all agree and get them here. That's it.”

“This is as much for you and your people as it is for me, Summer. Just say yes. All you have to do is invite them here and keep them here for a couple hours.”

“Are you going to be safe?” I asked, lowering the gun finally but keeping it in my hand.

Janie took a slow breath, one of her small shoulders rising and falling in a casual shrug. “Probably. Hopefully. I don't know. But that's not your problem,” she said, standing, and slipping her hood back up. “Here,” she said, slipping a piece of paper out of her pocket and placing it on the dining room table.

“Don't worry about me. I'll get by. I always do,” she said, pulling the door open and disappearing into the night.

I walked over to the dining table, grabbed the piece of paper which gave me a date and time, and locked the back door.

It looked like I had a dinner party to plan.

And an epic fit to throw if I was going to get anyone to agree to come...

Reign's driveway had never held so many cars before. Up until a year ago, no one even knew where his place was except me. I pulled my bike up to the side of Wolf's mammoth truck and climbed off. I pounded my fist into the side of a black rape van as I passed, making Janie jump and turn toward me, gun raised. It was a dick move, but she was fun to rile up. I mean, who didn't enjoy poking a sleeping bear once in a while? And Janie, the twenty-something, tatted, dark-haired, blue-eyed slip of a girl who was actually one of the best tactical minds inside the survivalist camp known as Hailstorm, yeah, she was a sleeping fucking bear.

“Jesus Christ, Cash,” she sighed, shaking her head. “I could have shot you in the head. I mean... not that I think the brain damage would be noticed or anything but...”

“You coming in?” I asked, nodding toward Reign's house.

Lo was her boss, as in Lo was the woman behind Hailstorm which, along with being a weird survivalist camp, also did work catching skippers, did private security, and carried out contract killing.

“Lo is here?” I asked, feeling my smile fall slightly.

I liked me a whole smorgasbord of pussy. Tall, short, thick, thin, blonde, brunette, purple-haired. Twenty. Forty. I didn't give a fuck. I loved them all.

All except fucking Lo, man.

While I might have admired the way that woman held a gun and spoke her mind, I couldn't get behind the fact that she and her people engaged in hits on any civilian for money. I'm okay with killing: for family, for friends, for brotherhood, for business, hell, even for your country. But killing just for the fuck of it, because the paycheck was high enough? Hell fucking no.

Granted, I had friends that did that shit. I had friends who broke kneecaps or worse. I had a friend who was the best god damn sniper in the country and used those skills. And I could go out with them, I could pound drinks, I could place bets on which one of us would land the hottest chick, but I didn't get involved with that shit.

And fucking a woman, even just for a night, meant you were involved.

“You know,” Janie said, cutting into my thoughts. “I watched you shoot a man right between the eyes. You didn't even flinch.”

I reached into the open window and chucked her chin. “It's different, kid. You and I both know that. Lo doesn't.”

I turned to keep walking but heard Janie say quietly, as if to herself, “Maybe I don't either.”

I shrugged it off as I made my way to the door, pulling it open and walking in.