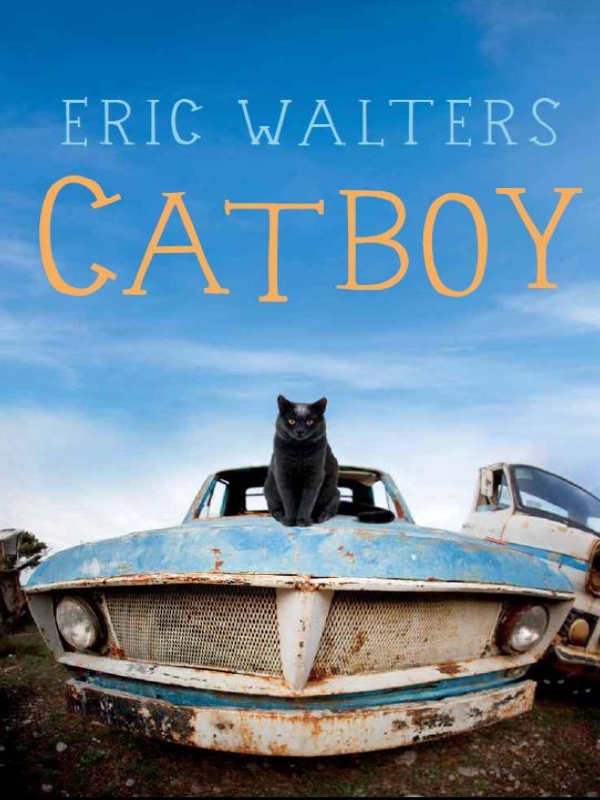 Summary:
The wild cat colony Taylor has been caring for is at risk of being destroyed, and in order to save it, Taylor will need the help of all his friends.

Orca Book Publishers is dedicated to preserving the environment and has printed this
book on paper certified by the Forest Stewardship Council
Â®.

To all the young readers of the Toronto District
School Board who contributed to the creation
of the bookâwith a very special thanks to Jaime,
who was the first to read and give feedback, and
who ultimately became a character in the story.

I kicked the rock, and it skittered across the street and pinged off the undercarriage of a car parked on the other side of the road.

“Doesn't matter. It's not your car anyway.”

“Want to hang out when we get home?” he asked.

“Don't you have homework?”

“I have to finish it before my parents get home, but that won't be till really late,” he said.

Both of Simon's parents worked. They owned a convenience store, but they also had a cleaning business. Most of the time they were at the store. After hours, in the evenings and on the weekends, they cleaned shops and banks. They worked a lot.

“Before I do anything, I need to go home and get something to eat,” I said. “I'm starving.”

I
did
want to grab some food. I also wanted to set the table, peel some potatoes for supper and maybe tidy up and do the breakfast dishes. It made it easier for my mom when she got home. She also worked a lot and was always tired when she got home. It made her smile when I helped out.

Our move to the city had been hard for me, but I think it was harder for her. I liked to try to make her life a little easier. I didn't mind helping, but I didn't want Simon to know that was what I was going home to do. I knew there was nothing wrong with helping around the house, but I didn't know if Simon would think it was stupid or lame. I didn't have many friends, and the ones I did have hadn't been my friends for very long, so I didn't want to risk losing them.

My new school was very different from my old one, but so far I liked the differencesâat least, I was learning to like them. There were twenty-seven kids in my class, and, altogether, they spoke fifteen different languages at home. I knew that because our teacher, Mr. Spence, had been talking to us about celebrating our diversity. The kids in my class were from all over the planet. After living my whole life in a little town, being in the city was like being on another planet. I was a stranger in a strange new land. One of the things that made it easier for me at my new school was that nobody was a minority, because nobody was a majority.

I was one of the few “white” kids, but that didn't matter. At my old school everybody was white, and we didn't even have an ESLâEnglish as a second languageâteacher because everyone spoke English.

My new friend Simon was Korean. Simon Park. He said Park was as common a last name in Korea as Smith was here. I didn't know anybody named Smith. He told me his parents gave him the name Simon so he'd fit in. He was born in Toronto, but he had a Korean name that he said I wouldn't be able to pronounce. He said it actually sounded like a swear word in English. That had only made me more curious, but so far he hadn't told me what it was, and he said he never would.

Simon spoke perfect English, which I guess makes sense since he was born here. He also told me he spoke perfect Korean. What did I know? He said some things to me in Korean, but he could have been counting to twelve, reciting his favorite Korean foods or just making interesting sounds.

I
did
know that he did really well in school. He told me that there were two things you had to know about Korean kids. First, their parents expected them to do really well in school. Second, no matter how well they did, it was never good enough. He told me if he ever brought home all A's, his parents would have wanted to know why they weren't all A+'s. I knew he was incredible in math. It was like the guy had swallowed a calculator.

“How about we play some basketball when we get home?” Simon asked.

“You know, Taylor, you're a pretty good player,” he said.

Before
. That was shorthand for “prior to our move,” when we lived in a house with a basketball hoop on the driveway that had a key and a three-point line my grandfather had painted on the pavement. That was before I had to compete with other peopleâolder kidsâto play on the court behind our apartment building. The hoop had no netting, the rim was crooked and the backboard was cracked.

He turned down an alley that cut between some houses. Alleys made me a little nervous. There were no alleys where I came from. The only ones I knew were on shows like
CSI
and
Law and Order
. That was where the detectives usually found the bodyâin an alley, sort of like the one we were walking down.

I looked around. An alley really
did
seem like a good place to dump a body. There were no people but a lot of bushes, garages and the backs of stores where somebody could hide. At least it was daylight, so it wasn't that scary, just unnerving.

“This is a shortcut, Taylor. Through here,” Simon said as he stopped in front of a chain-link fence. At the top was a sign that said
NO TREPASSING
. Simon pried part of the fence back.

“Like I said, it's a shortcut, through the junkyard.”

“Don't worry,” he said. “It's only three forty-five. They don't let out the attack dogs until four.”

My eyes popped open, and Simon burst into laughter. “No dogs, no worries. Everybody goes this way.”

I didn't see
everybody
, just him and me. Although, him and me was a big chunk of everybody I knew.

I could see through the fence into a junkyard filled with cars and pieces of scrap metal.

He hadn't come this way the other times we had walked home. I knew two weeks wasn't a lifetime, but still.

“Look, if you want, we can go the long way,” Simon said. “It's no problem. We can walk on the street. That's the way the little kids go.”

He had given me a choice, but really, he hadn't. He pulled the fence back even more to make the hole bigger. I ducked down and went through. Simon followed. I felt better having him on the same side of the fence. I'd had a strange thought that instead of coming with me, he was going to pull down the fence, trap me inside and whistle for a pack of pit bulls that would race from behind a car andâOkay, I was a little paranoid. I could trust Simonâwell, at least as much as I could trust anybody I'd known for two weeks.

We threaded our way around the cars. It was pretty cool, but hadn't I seen an episode of
CSI
where they found a body in a junkyard? If alleys were scary, this place was even
more
scary.

The junkyard was big and
filled
with cars. Some were up on cinder blocks, missing wheels, while others were metal skeletons with practically everything stripped off. There were piles of cars, one on top of the other, some of them flattened to look more like metal pancakes than vehicles, while others were precariously balanced. It looked like they would all tumble over if I sneezed. I was going to avoid sneezing.

The ground, except for a few muddy patches, was covered with crushed red brick and crunched loudly under our feet.

“Aren't the owners worried about somebody stealing something?” I asked.

“I hadn't thought about that,” Simon said. He stopped and unzipped his pack. “Help me put an engine in my bag.”

“Funny. Are you saying nothing here is small enough to steal?”

“Nothing back
here
,” he said. “They keep things like batteries and car radios up at the front of the yard. That's where the security guards are.”

“They have security guards?” I asked, looking around anxiously.

“They don't come back hereâ¦hardly ever.”

Reassuring and not reassuring all in the same sentence.

“I figure if you can't outrun a security guard, you deserve to be caught,” he said.

“Funny, I always thought it was best not to do anything that would cause a security guard to chase you.”

A sudden movement in the shadows caught my eye. I jumped and bumped into a car.