Read Catch Me If You Can (Love's Command) Online

Catch Me If You Can (Love's Command) 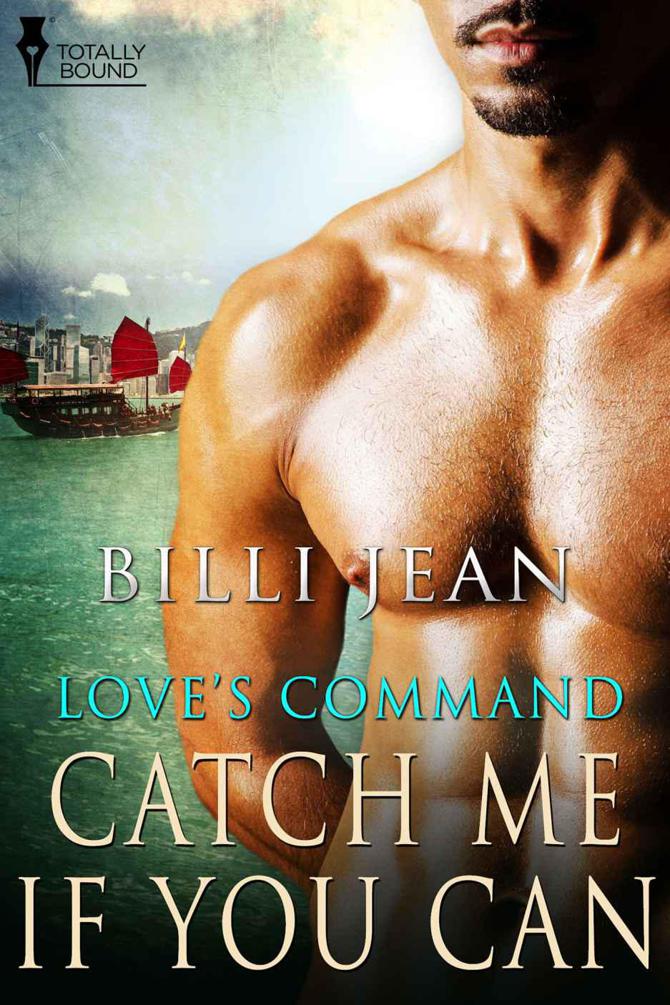 Catch Me If You Can

This story contains 228 pages, additionally there is also a
free excerpt
at the end of the book containing 7 pages.

CATCH ME IF YOU CAN

Daren Scott refuses to let a woman touch his heart, but when he’s faced with a woman he can’t forget, can he trust that with her touch, he can finally hold onto love?

The world Daren Scott lived in was full of danger and, all too often, death. There was no place in it for love, and surely not one single woman. Women were weak, delicate, too easily taken out by a stray bullet to trust them for the long haul—until one woman. Kylie might prove that all he really needs is her touch.

When Kylie meets Daren Scott, a new world of possibilities unfolds. He baffles her. He excites her. He drives her nuts. But most of all, he confuses her. Is he more than the bad boy Navy SEAL bent on seducing her into his bed? Could he truly be the warm, tender man who stole her breath and made her dreams possible?

I’d like to express my thanks to my friends

who have encouraged me to keep looking ahead and never even think of giving up.

Jenna, get yourself to California, girl!

Cara, true love does exist—maybe even in Texas.

Daren lay in a pool of his own blood. Death would come to claim him.

The desert sun beating down would finish what the gunshot wounds had started. With each of his labored breaths, the heat baked him. Underneath him the sand soaked up every drop of moisture wrung from his body.

Life narrowed down to the brilliance of the sky and each of his shallow breaths. Each second he lay out here, exposed and bleeding, was one second taken off his chances of survival.

Not that I had a chance to begin with.

The desire to live had beaten him. Not the mission. Not the bullet lodged in his side. The mission had been a success. So why was he bleeding out under the desert’s blistering heat?

Did it really matter?

A desert hawk cried out, startling him out of his cynicism. He watched it spiral and glide on the current, a dark silhouette winging effortlessly on an updraft. The bird hovered for moments above him, no doubt wondering if he’d be his next meal.

Not a chance, bird brain. Not if I have anything to say about it.

The shape disappeared as he tried to focus on it, making him wonder if the bird had ever been there to begin with. How could something so beautiful survive in this place?

He let the worry go. Exhaustion made him feel as if his body were sinking into the sand, making his thoughts muddled. He closed his eyes, too tired of fighting the urge to stop himself.

Time passed, measured by the steady, dull beat of his heart and the heat drilling down on him.

Slowly, he felt something—not heat, not the chill of the desert night—but something softer, shade perhaps. Before he could process the thought, he realized he wasn’t alone.

Water soothed his face, and the cool relief of shade slowly registered on his dull brain.

He didn’t move, half-afraid to look and have the gentle touch disappear. Only when he was certain what he felt was real, that someone else was really with him, did he open his eyes to see a beautiful woman crouched down near him. Wisps of long dark hair blew across her face, hiding most of her from his view, until the desert wind caught the curtain of silk and lifted it aside.

Daren had seen his share of women—but not once in his life had one struck him like a blow to the chest as this one did now. She was more than beautiful, she looked like an angel.

Concern marred her perfection though, and he tried to lift his hand, to assure her, touch her, to simply comfort her until the worry left her almond shaped eyes.

His hand wouldn’t budge. No matter how hard he tried, his body ignored his orders.

Disquiet replaced the pain he’d lived with for so long. What if she disappeared, like the hawk, before he learned if she were real?

He tried again to simply touch her, but his arm refused to listen. It was like a thousand pound elephant had parked itself on him, cutting off his ability to move.

“You must stay still. I’ve hidden you, but they are looking.”

She brushed a wet cloth over his forehead as she spoke, dimming the fever burning there. She touched him tenderly, with more care than any lover he’d ever seduced.

With a frown, she concentrated on something she’d wrapped around his stomach. He looked down and noticed for the first time her hands were bloody. The color shot a dart of fear to his heart. Was she hurt?

He tried to reach her again, but she shook her head, quickly holding his arm down with a firmness that surprised him coming from such a fragile person. He’d worked hard to lift that arm, didn’t she realize that?
Am I this weak, that a tiny woman can overpower me?

She shifted her attention beyond him, then, just as quickly, back on him. Dark brown eyes, slanted at the corners like an Asian princess, shimmered with unshed tears. She bent closer and cupped his face with her hands. Her skin was delicate and satiny smooth against his sun burnt flesh.

“You must stay still, quiet. They will come for you soon.”

Is she a dream?

The thought swirled in his head, unanswered. He didn’t know, but suddenly the answer didn’t matter. He wanted her to stay with him, here, where he knew she belonged. He tried to touch her, but she pulled back, turning from him to assess the area with narrowed eyes. She was protecting him. She aimed a gun at something in the distance before she slowly lowered it and turned back to him. The concern was back in her eyes, colored with fear.

She placed the gun out of sight behind her back and picked up the cool cloth again.

“You will need more help than I can give you. They must hurry now.”

Her English had a slight accent, a slight giveaway that it wasn’t her native tongue, but he only noticed because he hung on each word. He swallowed past the dryness of his throat, grimacing from the pain. Immediately she lifted a water bottle to his lips. He drank it down never more thankful for stale, warm water in his life.

She cradled his head in her arm with care not allowing him to drink too much or too fast. After letting him have several swallows, she lowered him back down. Exhaustion made the world blink with stars, reminding him how tired he really was. At the same time, he didn’t dare fall asleep. What if she disappeared? Unlike the hawk, this woman meant something to him. He couldn’t lose it now.

Blinking kept him conscious, but he knew he was only buying himself time. Still, he soaked her in, the way she smiled at him as if she knew the fight he held with himself to stay awake.

Suddenly, all he wanted was to know how pillow-soft her lips were, how lush her mouth could be when pressed to his heated flesh. He was on fire, burning, and the torment grew not from his wounds, but from the anguish of not feeling her kiss. The teasing lift to her lips only encouraged him all the more to try to pull her down for one sample of her.

He couldn’t remember ever meeting her, except he suddenly couldn’t imagine life without her in it. He wanted to explain that he didn’t want her to leave, that she needed to stay with him, that he’d protect her, but he couldn’t get the words out.

“Do you understand? You’re safe, but you must stay silent.”

His vision blurred, but he refused to close them.

“Stay with me. Don’t leave. Don’t go. Stay.” His voice came out low and broken.

“I need you to be strong. Survive, do you understand?” she asked.

Her voice sounded far off, and when he blinked against the brightness of the sun, she wavered.

In the distance, he heard the sound of the hawk calling.
Is she a dream? Have I conjured her up to keep me company?

He managed to brush against her arm before his hand fell back down to his side.

She’s leaving me
. Darkness blurred the edge of his vision, threatening to take her away, but he knew he only had a few more seconds with her.

“Wait, I—” He blinked rapidly, trying to force himself to stay conscious.

Her face came into view, but this time she’d tied her hair up away from her face. “Shh, stay here. I must go back before they discover where I’ve hidden you.”

When did I get from the desert to a room?

The thought should have caused him alarm, but all he could think about was that he needed to tell her to stay.

She covered his mouth with her hand. The shock of her cool fingers helped him fight the blackness dimming his vision. She was strong. She’d saved him. He needed to tell her to stay. With him. Without him, somehow he knew she’d come to harm. Did he know that or fear it?