Read Catch Me When I Fall Online

Catch Me When I Fall 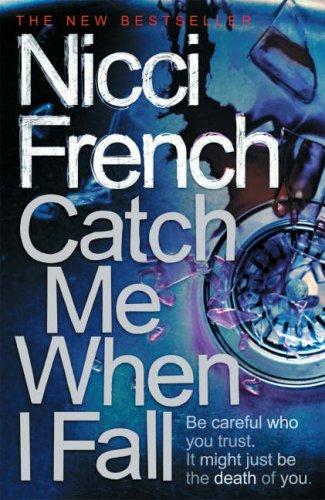 Catch Me When I Fall
Book Jacket
Rating:

Tags:
Fiction, Suspense, Mystery, Psychological, Large type books, Psychological fiction, Fiction - Psychological Suspense, England, Extortion, Stalking victims, Businesswomen, Self-destructive behavior
SUMMARY:
Holly Krauss lives her life in the fast lane. A successful, happily married businesswoman, she is loved and admired by everyone she meets. But thata (TM)s only one side of Holly. The other takes regular walks on the wild side and is making reckless mistakes. When the two sides of Hollya (TM)s life collide, her world quickly spirals out of control. She thinks shea (TM)s being stalked, that someone is trying to extort money from her, and that threats lurk around every corner. Soon the people closest to her are running out of patience... But are her fears due to paranoia and illness, or is the danger very, very real? And if Hollya (TM)s judgment and mental health are not sound, who will catch her when she falls?
SUMMARY:
Detective and mystery stories. You're a whirlwind - a success. You're living life on the edge. But who'll catch you when you fall? Holly Krauss is a city girl burning the candle at both ends. Despite a comfortable home life, a tough job and friends who admire her, she secretly enjoys taking reckless, dangerous walks on the wild side. But Holly can't keep those worlds separate forever. Soon enough her secret life bleeds into her safe one and everything spirals out of control. She's making mistakes at home and at work, owes money to the wrong people - and now it seems that someone's stalking her. Could it just be paranoia or is she in very real danger? And who can you trust when you can no longer trust yourself?
French, Nicci
Book Jacket
None

Catch Me When I Fall

Ali rights reserved. Without limiting the rights under copyright reserved above, no part of this publication may be reproduced, stored in or introduced into a retrieval system, or transmitted in any form or by any means (electronic, mechanical, photocopying, recording or otherwise), without the prior written permission of both the copyright owner and the above publisher of this book.

Publisher's note." This book is a work of fiction. Names, characters, places and incidents either are the product of the author's imagination or are used fictitiously, and any resemblance to actual persons living or dead, events, or locales is entirely coincidental.

French, Nicci
Catch me when I fall / Nicci French.

To Jackie and Tomas

I died twice.
The first time, I wanted to die. I thought of death as the place where
the pain would stop, where the fear would finally cease.
The second time, I didn't want to die. In spite of the pain and in spite of the fear, I had decided at last that life was where I needed to be: messy, scary, tiring, lovely, hurting life, with all its failures and its sadness, with all its sudden and unlooked-for bits of joy that make you close your eyes and think: Hold on to this, remember this. Memories can carry you through. Dancing in the dark; seeing the sun rise; striding through the city, lost in a crowd; looking up to meet your smile. You saved me when I could no longer save myself. You found me when I was lost.
I didn't want to be dead, but someone else wanted me to be. They tried very hard to make me die. I'm a person who people seem to either love or hate. Sometimes it's been hard to tell the difference between the two. Even now, when it's all over and I can look back at it like a landscape I've walked through and left behind, there are things that remain hidden, secrets lost to me.
Dying takes you to another place. All alone, you cross a line and nobody can join you there. When my father died, I was sixteen years old. I remember the spring afternoon when he was buried. My mother tried to make me dress in mourning clothes but my father always hated black, so I put on my pink dress and my reddest lipstick and wore high heels that sank into the soft earth. I wanted to look like a hussy, like a tart. I smeared blue eye-shadow on my eyelids. And I remember the words the vicar said -"Ashes to ashes, dust to dust" -and that people were crying and holding on to each other. I knew they wanted me to

cry as well, and then they could have put an arm round me and comforted me, but my father hated people weeping. He always liked us to show the world we were happy. So I smiled through the service, and I think, because of the way everyone was looking at me, I even laughed a bit. My mother put a single white rose on his coffin when they lowered it into the ground, the way you're supposed to. I took the bracelets off my arm and tossed those in, so for a few seconds it felt more like a pagan burial than a respectable English funeral. One of the bracelets broke, and its bright plastic beads rolled around crazily on the cheap wooden lid. Rat-a-tat-tatting on my father's face.
For a while I thought I would go mad with loneliness and rage, although I never told anyone about that because I didn't have the words. For ten years, I tried to get back to him. In despair. In love. In disgust, hilarity, loathing and revenge.
I died twice. Only twice. You'd have thought that with all my frantic striving I could have done a bit better than that.
So here they are, then. The people who loved me and hated me, who wanted me to live and who wished me dead, who tried to save me and who let me go. They all look happy. They are gazing at each other, holding hands; some of them are kissing. I can tell that they are making promises to each other for the life ahead. That great and mysterious journey. Only one is missing.

'I'm attracted to danger,' he said. 'Always have been. What can I get you two?'
I thought for a moment. Pace yourself, Holly. It was an hour since Meg and I had left the office but I was still buzzing. Fizzing. I once had a friend who was working as an actor. He'd told me how after a show it would take him hours to wind down, which was a bit of a problem if the curtain fell at half past ten and you had any ambition to fit in with the rest of the world. Mainly he found himself fitting in with other actors, who were the only people who felt like heading out for dinner at eleven and sleeping until noon every day of the week.
Another friend from college is a long-distance runner. She's impressive. She almost got into the Olympics. She runs ridiculously fast and far just to get her body going. Then she runs a properly serious distance and punishes herself up steep hills. After that, the difficulty is to bring her body back to normal. She does more running simply to wind herself down. Afterwards she puts ice on her muscles and joints to cool them. I could do with that. Sometimes I feel I'd like to put my whole head into a chinking barrel of ice.
'It's not that difficult a decision,' he said. 'Meg's already asked
for a white wine.'
'What?" I said.
For a moment I'd forgotten where I was. I had to look around to remind myself. It was wonderful. It was autumn, but it was a hot evening and the crowd in the Soho bar was spilling out on to the street. It felt like the summer was going to go on for ever,

winter would never come, it would never rain again. Out in the countryside fields needed water, riverbeds were dry, crops shrivelling, but in the middle of London it was like being by the Mediterranean.
What do you want to drink?'
I asked for a white wine and some water. Then I put my arm on Meg's shoulders and murmured into her ear, 'Did you talk to Deborah?'
She looked uneasy. So she hadn't.
"Not yet,' she said.
'We need to talk about this. Tomorrow, OK?'
Still or sparkling?" asked the man.
Tap,' I said. First thing, Meg, before anything else.'
'All right,' she said. 'Nine o'clock, then."
I watched her and she watched the stranger walking over to the bar. He had a nice, open face: what was his name? Todd, that was it. We'd all staggered over from the office. It had been a hard day. We'd arrived as a group but gradually been diluted by the crowd. I saw familiar faces around the room, which was full of happy people who had escaped from their offices. Todd was a client who had come in to check our proposal and he'd tagged along with us. Now he was trying to buy the drinks at the crowded bar. He was having difficulty because one of the women behind it was being shouted at by a rude customer. She was foreign -something like Indonesian -and the rude customer was yelling that she had given him the wrong drink. She was having difficulty understanding what he was saying. 'Look at me when I'm talking to you," he said.
Todd came back clutching the drink for Meg, the two for me, and a beer for himself. 'They wouldn't give me tap water,' he
said. "It's from a bottle.'
I took a sip.
'So, you like danger,' I said.

Encounters by Felkel, Stewart
Dark and Damaged: Eight Tortured Heroes of Paranormal Romance: Paranormal Romance Boxed Set by Colleen Gleason
Misterioso by Arne Dahl, Tiina Nunnally
Innocence Lost by Tiffany Green
Bite Me (The Transfigured Ones Book 2) by Michelle Roth
Anatomy of a Girl Gang (9781551525303) by Little, Ashley
Rise of the Serpent (Serpent's War Book 2) by Jason Halstead
Diary of a Dog-walker by Edward Stourton
Champion (Studs in Spurs) by Cat Johnson
All Shots by Susan Conant
Our partner