Read Catch of the Day Online 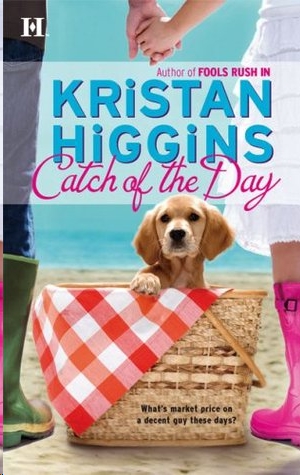 Maggie Beaumont’s luck is about to change. Sure, she’s known for her bad romantic choices—her former boyfriend broke up with her by bringing his new girlfriend home for a visit. And then there was the crush she had on a gorgeous young Irishman, who turned out to be Father Tim, the parish’s new priest.

But romantic salvation has arrived in the form of handsome, if surly, fisherman Malone. It turns out there’s a heart of gold underneath his barnacle-clad exterior. Will this catch of the day turn into the dish of a lifetime?

UNTIL THERE WAS YOU

“Higgins…employs her usual breezy, intimate style,
which is sure to engage her fans.”
—Publishers Weekly

“Higgins has a knack for sweet
but not syrupy romances peppered with humor
and populated with colorful characters.”
—Booklist

MY ONE AND ONLY

ALL I EVER WANTED

THE NEXT BEST THING

TOO GOOD TO BE TRUE

JUST ONE OF THE GUYS

“Higgins provides an amiable romp
that ends with a satisfying lump in the throat.”
—Publishers Weekly

CATCH OF THE DAY

Until There Was You

My One and Only

All I Ever Wanted

The Next Best Thing

Too Good to Be True

Just One of the Guys

This book is dedicated to my sisters,
Hilary Murray and Jacqueline Decker.
You are my dearest friends,
and I love you more than I can say.

Terence Keenan, my brave and handsome husband,
is patient, tolerant, funny and oh, heck just wonderful. Flannery and Declan Keenan are my favorite people
in the world, and every day I’m quite thrilled
to be their mommy.

Thanks to my mom, brother, smart and talented sisters, my lovely grandparents who always let me have
two desserts, and the rest of my sprawling,
boisterous family. On the business side,
thanks to the world’s best agent, Maria Carvainis,
who is so wise and gentle with this middle child.
Thanks to Abby Zidle for her excellent input and
to Tracy Farrell and Keyren Gerlach for putting the final shine on the copy. Thanks also to Chris Jaw, Virginia MacDonald and Gigi Lau for my fantastic covers.

As ever, I am indebted to writer Rose Morris,
my great friend from the Pine Tree State, whose input greatly improves everything I write. Brad and
Mary Wilkinson helped me fall in love with Maine by taking me to Eggemoggin Reach for two summers, and I will ever be grateful that I got to share their home and their kids on that lovely, rocky shore. When I was seven, my beloved dad brought me to Ogunquit and
talked a lobsterman into letting us check pots with him. The boat was called the
Ugly Anne.

F
ALLING IN LOVE
with a Catholic priest was not my smartest move.

Obviously, I’m well aware of the whole vow-of-chastity, married-to-the-church thing. I realize that yearning for a priest doesn’t exactly further the cause of meeting my future husband. And in case I might have overlooked those little facts, I have an entire town pointing them out to me.

The problem is, even when someone is clearly wrong for you, he might seem…well, perfect. And aside from that one hulking detail, Father Tim O’Halloran is everything I’ve ever let myself dream of in a man. Kind, funny, charming, intelligent, hardworking. He likes the same movies I do. He loves my cooking. He compliments me often and laughs at my jokes. He cares about the people of my hometown, listens intently to their problems, offers gentle guidance when asked. And he’s from Ireland, the icing on the cake, because ever since I was sixteen years old and first saw U2 in concert, I’ve had a thing for Irish guys. So even though Father Tim has never said or done anything vaguely improper, I can’t help dreaming about what a great husband he’d make. I’m not really proud of this, but there it is.

My romantic problems predated Father Tim, though he’s probably the most colorful chapter in the joke book that makes up my love life. First off, it’s not easy being a single woman in Gideon’s Cove, Maine, population 1,407. Ostensibly there are enough males for females, but statistics can be misleading. Our town is in Washington County, the northernmost coastal county in our great state. We’re too far from Bar Harbor to attract many tourists, although we do live in what is undeniably one of the most beautiful areas of America. Gray-shingled houses hug the harbor, and the air snaps with the smell of pine and salt. We’re a pretty old-fashioned town—most people make their living either by fishing, lobstering or working in the blueberry industry. It’s a lovely place, but it’s remote, a good three hundred miles north of Boston. Five hundred from New York City. Meeting new people is difficult.

I try. I’ve always tried. There have been a few boyfriends, sure. I cheerfully accept fix-ups and blind dates when they’re thrown my way, I do. I own and operate Joe’s Diner, the only restaurant in town, so I have plenty of chances to meet people. And I volunteer—I volunteer my ass off, to be frank. I deliver meals to the infirm. I cook for the soup kitchen on Tuesday nights and bring whatever leftovers I have on an almost daily basis. I provide dinner at the fire department’s monthly meeting. I organize clothing drives and fund-raisers and offer to cater just about any event for a minimal profit, as long as it’s for a good cause. I am a pillar of society, and truthfully, I wouldn’t have it any other way.

But in the back of my mind, there’s a selfish motive. I can’t help hoping that my good works and cheerful attitude will be noticed by someone…perhaps some rich and handsome grandson of the elderly man whose dinner I delivered, or some new-to-town volunteer fireman who just happens to be, oh I don’t know, a board member of Oxfam and a brain surgeon, too.

However, the charitable neurosurgeon has proved elusive, and as of one year ago, when I was thirty-one years old, I remained single with no credible prospects on the horizon. That’s when I met Father Tim.

I had gone for a bike ride out to Quoddy State Park. We were having a warm snap, for March, anyway—the temperature reached forty degrees, the snow had softened, the breeze was quiet. I’d spent most of the day cooped up inside, and a bike ride seemed like just the thing to do. Clad in layers of fleece and microfiber, I rode further than usual in the brisk air and fading sunlight of the afternoon. Then, with classic New England unpredictability, a drenching, icy rainstorm blew in from the west. I was a good ten miles from town when my bike wheel slid on some ice. I went ass over teakettle down an embankment, right into a wet patch of snow that concealed eight inches of mud and ice. Not only was I filthy, freezing and wet, I had also managed to cut my knee and tear my pants.

Feeling very sorry for myself, I hauled my bike up the bank at the exact moment a car went by. “Help! Stop!” I yelled, but whoever it was didn’t hear me. Or heard me and was afraid, as I resembled an escaped lunatic at that moment. I watched the taillights of the blue Honda disappear in the distance, noting that the sky was suddenly much darker.

Well, I didn’t have a choice. I started walking, gimping along on my cut leg, until a pickup pulled over. Before I could even tell who it was, the driver grabbed my bike and popped it in the bed of the truck. Squinting through the rain, I saw it was Malone, a silent, slightly scary lobsterman who moored next to my brother. He may have spoken—the words “Get in” ring a bell—so I gingerly crawled into the cab of his truck. In my mind, I could hear an imaginary narrator…
Maggie Beaumont was last seen riding her bike one dark and stormy afternoon. Her body was never found.

Megan Chance by A Heart Divided
The Wedding Favor by Caroline Mickelson
The Blue Effect (Cold War) by Harvey Black
Mugged by Ann Coulter
Their Dark Hunter (Masters of Darkness) by Angelini, Alaska
Healing Promises by Prince, Joseph
Redemption by Lindsey Gray
Imminent Danger: And How to Fly Straight Into It by Proulx, Michelle
Crusader by Edward Bloor
Palmer-Jones 03 - Murder in Paradise by Ann Cleeves
Our partner