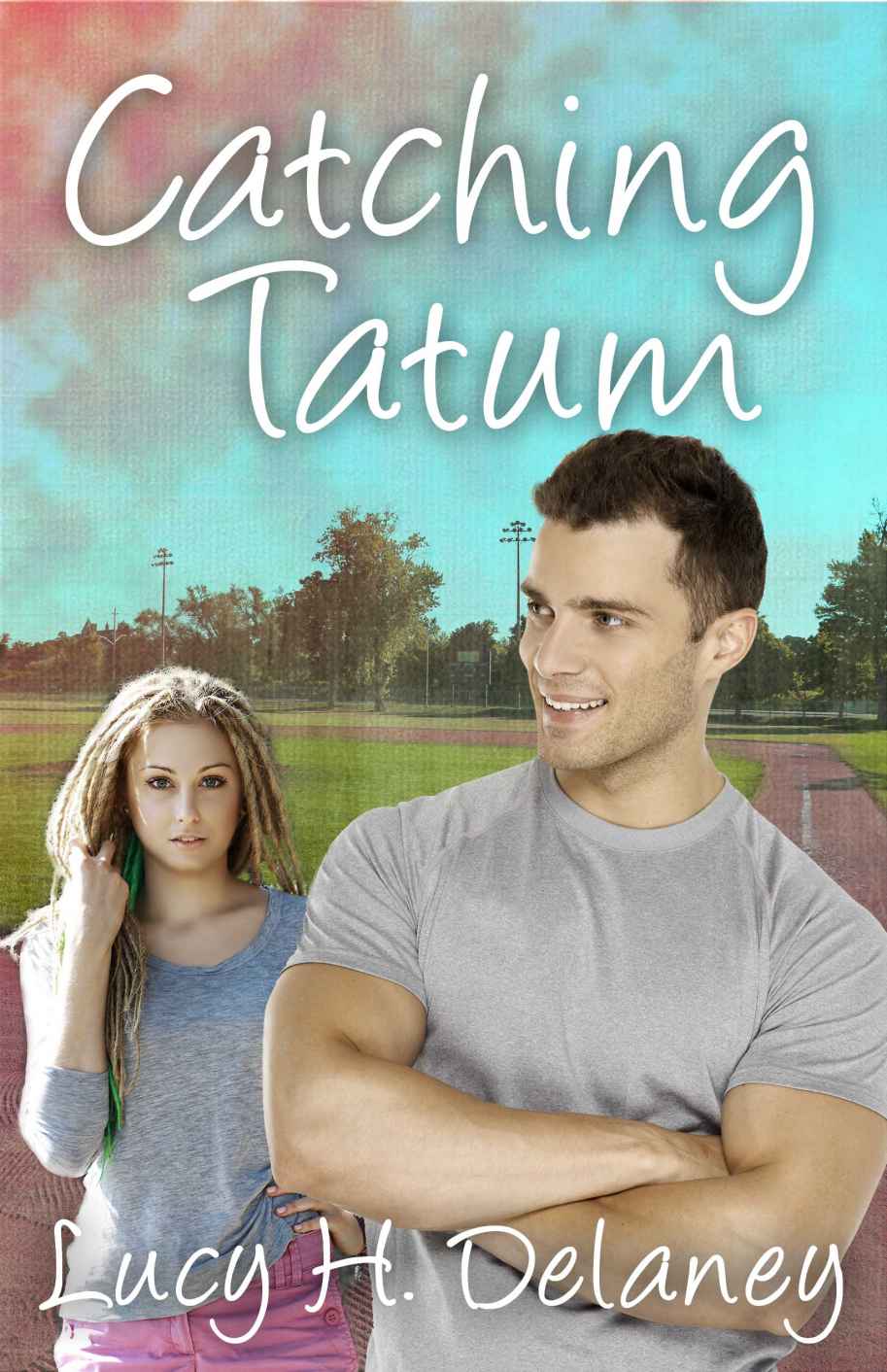 should be directed to:
[email protected]

This is a work of fiction. Names, characters, places, brands, media, and incidents are either the product of the author's imagination or are used fictitiously. Any resemblance to similarly named places or to persons living or deceased is unintentional.

To my Auntie Kathy, the best sports mom her boys could ask for, mother hen her wayward niece needed, and Organ Lady to the rest. May the LORD grant you peace as you lean on Him for strength down the road you now travel. You got this!

To my gym, the best gym on the planet, Crossfit Performance – Wenatchee, and my gym family, especially those 5:15 p.m. and lunchtime crews. Thanks for letting me workout with the cool kids!

And to my Tatum and her number one fan, her mama, Kristy. May the bond the two of you share strengthen and grow as you race together through all life's turns. Thanks for letting me be a part of it.

I love you all!

MY MOM
had a picture of a yellow poplar wood and this poem hanging in every house we ever lived in. It was from her mom and someday it will be mine. She told me what it meant the year I had my own two roads to choose from. I was so careful after my high school romance turned tragic to set rules and make a plan so that my heart didn't get broken ever again, so that my head stayed in control. The rules were supposed to save me but instead they made it even harder to choose my path. I had two men to choose from and I stayed at the beginning of the roads and looked down both paths as far as I could, as long as I could, until it was too late to choose either ...

And sorry I could not travel both

And be one traveler, long I stood

And looked down one as far as I could

To where it bent in the undergrowth;

Then I took the other, just as fair,

And having perhaps the better claim,

Because it was grassy and wanted wear;

Though as for that the passing there

Had worn them really about the same,

And both that morning equally lay

In leaves no step had trodden black.

Oh, I kept the first for another day!

Yet knowing how way leads on to way,

I doubted if I should ever come back.

I shall be telling this with a sigh

Two roads diverged in a wood, and I –

I took the one less traveled by,

And that has made all the difference.

I AM
a memory maker. My mom inspired that in me. She was always stopping me or one of my brothers (I had four of them, two older, two younger) in the middle of something to make a memory. She would tell us to freeze and realize our surroundings. Then she would tell us to gather it all up: the sights, the sounds, the smells, and feelings ... like a long, deep breath. “Look around you. What's your emotion? What do you see, hear, smell and feel? Will there ever be a moment like this again?” she would ask and then tell us to let the memory fill us up completely, then blow it out, bottle it up, put a cork in it, and save it for all time and eternity. At some point, when I was really young, I had so many memories I couldn't hold them in my arms anymore, and I invented an imaginary storage house for all of them.

My memories rested neatly on thick, dark wooden shelves carved into the walls of an old, cozy cave. The rough-hewn walls scratched my fingertips when I thought about touching them, and inside a soft light glowed from everywhere; dim, warm and safe. Everything in my memory cave was old and the stopped up bottles were sorted onto several dusty shelves. The good memories always stayed at eye level where I could reach out and uncork them easily and, in an instant, inhale the sweetness of days and years gone by.

One of my favorites, my wedding night, sits at the very edge of the best shelf. We've been married so long now that things get mundane and predictable. Don't get me wrong; there's something to be said for regular, routine, curl-my-toes kind of sex, but I also like to remember how we used to be, so I pull out the stopper and I breathe in the memory of our youth and yearning, and the need to prove our vows were true by becoming one, like we already were in heart and soul.

“Give me first,” he said, and leaned in for a kiss outside our five-star hotel room.

I was cradled in his arms. He carried me from the elevator. I wrapped my arms around his neck and let my fingers and thumbs climb up into his thick hair.

His mouth covered mine. His lips, his tongue, the stubble on his chin, the aftershave, and pheromones that swirled around him were new and old all at the same time. He was mine forever and always and he still had a score to settle. We were going all the way and this time I would not be stopping him. The moment was perfect. He played my game and we both won. As soon as he carried me over the threshold, I jumped out of his arms and reached behind me to undo the zipper of my dress. I can't say that I purposely planned to have a dress that was easy to take off, but subconsciously I must have been thinking about that. There was no undressing slowly to tease him; we'd been teasing each other for way too long. It was all about getting the deed done.

“Second base,” he said in my ear, reaching to help unzip the back of the dress. His head dipped as the dress slumped to the floor in a swoosh of billowing fabric. I don't even remember my bra coming off, just his hands on my bare breasts. He pushed them together and took both in at once, sucking hard. After an eternity of bliss, he let them go but continued to knead and tease the right one with his thumb. His other hand slid down my torso to my bare backside. “Perfection,” he said, with a squeeze and pat for emphasis, before stepping back to undress.

He was already hard and I laughed at him trying to undo his rented tux pants that would be returned the next day. Naked and unashamed I stood before him, impatiently waiting, letting him take me in, stupid grin on his face, while his hands fought with his waistband. I smiled and jumped up on him. He grabbed my thighs and pushed me further into the room, stumbling over my gown pooled on the floor in front of the door. The granite sink counter, ice cold on my flesh, sent a shiver through me when he set me on it.

“I can't get these things off!” he roared.

We laughed, we kissed. “Don't break them, they'll charge us a fortune to fix them!” I said before kissing him again. The pants had a hook and eye instead of a button and though he undid my bra in milliseconds, he was no match for the pants’ clasp.

“Let me,” I said, wrapping my legs around him, pulling him closer. I bit the flesh of his shoulder just to let him know that I wanted him as badly as he wanted out of his pants. His hands wrapped-up in my waist-long dreads and he pulled my head back exposing the tanned skin of my neck and kissed me from ear to ear while I blindly fumbled with the clasp.

Finally, he was free and our mouths found each other again. I used my feet and hands to push his pants down, briefs off, and grab all that was him and squeeze. Tongue, hands, legs, all of me wrapped around him, tempting, teasing, tasting. We were ready for each other. He lifted me up, our lips never separating. I could feel his smile when I guided him into a better position between my legs. I opened my eyes; he was staring at me. Forehead to forehead, eyes locked, noses touching, it was time. “What are you waiting for?” I asked with a devilish grin.

“You know I love you,” I answered.

“That's my girl. I love you, too. Be mine forever?” he said, pushing his way inside me faster than I expected.

“Oh, baby, forever,” I stuttered. “You feel so good.” And then words disappeared from our consciousness. We were one and they were irrelevant in our world of passion and pleasure. I met his movements and held on for dear life as my own body tensed in expectation. He ended furiously, built up anticipation spilling into and out of me. I felt him throbbing and gushing and it sent me into my own oblivion, where not even he existed anymore, except as an agent of rapture. It was not my first climax, but it was the best I had ever known up until then. That's why the memory of that night has such a special place on the shelf.

Betsy and the Emperor (9781439115879) by Rabin, Staton
Donkey-Vous by Michael Pearce
The As It Happens Files by Mary Lou Finlay
Good Omens by Neil Gaiman
A Scandal in Belgravia by Robert Barnard
Return of the Rogue by Donna Fletcher
All Fall Down by Matthew Condon
Vixen’s Run by Zenina Masters
Puppet by Pauline C. Harris
Homeworld: A Military Science Fiction Novel by Eric S. Brown, Tony Faville
Our partner