Read Caterpillar, a Paranormal Romance With a Touch of Horror Online

Caterpillar, a Paranormal Romance With a Touch of Horror 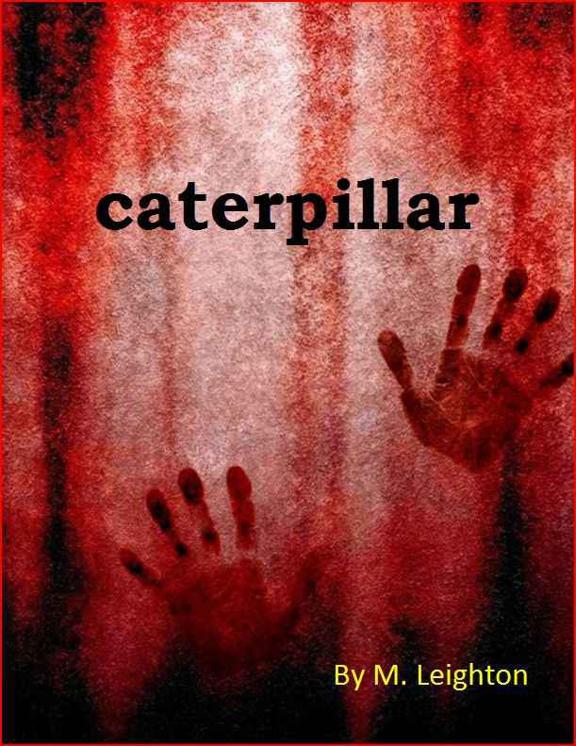 All rights reserved.  Except as permitted under the U.S. Copyright Act of 1976, no part of this publication may be reproduced, distributed or transmitted in any form or by any means, or stored in a database or retrieval system, without the prior permission of the author.

This ebook is licensed for your personal enjoyment only.  This ebook may not be re-sold or given away to other people.  If you would like to share this book with another person, please purchase an additional copy for each person.  If you are reading this book and did not purchase it, or it was not purchased for your use only, then please return it and purchase your own copy.  Thank you for respecting the hard work of this author.

Demons are real.  Surprised?  Me, too.  But it’s true.  They walk the earth, sometimes in human form, sometimes not.  I had no idea that the campfire stories I’d heard so often as a child had any basis in reality, at least not in
this
reality.  But I was wrong.  They live.  They kill.  They thrill and seduce, among us, around us.  Vampires, werewolves, witches, golem, lamia, things that go bump in the night for which there are no names.  They’re all out there, threatening our gates.  Their goal?  It’s to lure us into their world, to take from us that which cannot be recovered.  They reap the unwary, the undecided, the unprepared.  They reap…us.  Few things can stop them, few people but The Guardian of the Pyramid, The Protector of the Earth, Sea and Sky, The Goddess of the Crossroads, The Daughter of the Angels.  Imagine if all those were one person.  Imagine if that person was you.

That’s the dramatic yet simple beginning my life
should’ve
had.  Instead, I got pitched into the deep end of the pool with no warning and little preparation.  My story, unlike that clear-cut summary, is far more complicated and far less informed. It’s also far more exciting and far more dangerous.

I struggled to my feet.  The room dipped and swayed this way and that.  When my vision came into focus, I saw her.  And my heart stopped.  It was Rainn.  She was spread eagle on the work bench, her arms and legs tied down with thick, yellow rope.  I could see the edges of white material peeking out from behind the man’s tie that held the gag in her mouth.  Her head was anchored to the table by a piece of duct tape that went across her eyes.  Her skin had an unusual pallor and was slick with sweat.  Her chest heaved.  She’d heard us; she knew she was no longer alone.  And she was afraid.  The air was so thick with it I could almost taste it.

In some detached part of my brain I marveled at how dramatically my life had changed in eight short days—from girl-next-door Realtor to demon-hunted savior of my family line.

Friday, a week ago.

“Your lipstick’s smeared,” Rainn informed me, her dark brown eyes meeting mine in the mirror.  She brushed some powder over her light mocha skin then smoothed her long caramel hair before turning toward me.  “Your turn,” she said then wiggled off toward the living room.

Rainn Forester was my best friend.  Actually, she was really my
only
friend.  She was as smart as she was beautiful.  She liked to go with me to show houses occasionally.  It was her way of staying on top of the market and just one of the many reasons she was so good at her job.  She basically ran Pinnacle, one of the most successful real estate agencies in all of Atlanta.

I stepped up to take my turn in front of the mirror.  She was right.  My dusty rose lipstick had smeared the tiniest bit on one side.  I wiped at it then stepped back to survey my reflection.

I saw almond shaped hazel green eyes.  I saw decent cheekbones and average lips in a roundish oval face.  I saw the fairly neat shoulder length dark blonde hair that everyone commented on.  My mother had always called it my “crowning glory”.  It was the only exceptional thing about me—other than my scar.  Over my left eye, cutting through my eyebrow in a jagged line, was a pale, faded scar.  To me, it dominated my face, stood out like a flashing neon sign.

Looking at the scar always took me back in time, back to my ninth birthday.  It was the day my brother and I had gone to live with Mamaw Huntley, the last day I’d seen my parents alive.  It was also the day I’d gotten my scar.  Those memories had been haunting me more and more over the previous two weeks.  That was a sure sign that a birthday was on the horizon and this would be my twenty-fourth.

Shaking off my depressing reverie, I pulled my hair around to cover the blanched line, as was my habit.

“Stop looking at that thing.  I’ve told you a thousand times you can barely see it,” Rainn called from somewhere deeper in the house.  Before turning from the mirror, I pinched my cheeks for a little color, refusing to dwell on the fact that I was so transparent.  “Get crackin’,” she prompted.

Rainn was making her way around to the windows downstairs, opening a couple in each room to let in some fresh air, while I set about cozying things up a bit.  I lit a scented candle, set out a silk flower arrangement and some coffee mugs and hung some decorative towel sets.

I scurried through the kitchen, dining and living rooms turning on lights and sliding down dimmer switches, creating just the right ambience—soft and homey.  I made my way upstairs, repeating those same actions as I went.

I rounded the corner into the master suite and stopped just inside the doorway.

The sun was setting outside.  It shone through the floor-to-ceiling windows that dominated the wall opposite the door.  The blazing ball of fire sparkled like a thousand diamonds in the beveled glass panes and cast a soft orange glow on the pale walls and warm hardwoods.  The scene was tranquil, beautiful even, but for the bright red streaks and slashes that marred the otherwise soothing palette.

I couldn’t stifle my gasp.  I sucked in a lungful of air, preparing to scream my head off.  When I did, a coppery tang flooded my nasal passages.  I could taste it, too, sweet and metallic.  The sight and the smell collided in my head, defining a single, and in this case horrifying, word: blood.
Lots
of blood.  My dinner bubbled up in my esophagus and saliva poured into my mouth.

It was everywhere, the blood—on the floor, on the ceiling, on the walls.  There was even blood on the windows, streaky hand prints, like crimson flames licking their way up the glass.  One pane held a marking.  Several circles were drawn in blood, each one with a larger one around it like a gruesome vortex, gilded by the fiery sun.  My head spun dizzily giving the symbol the appearance of movement.  As much as I wanted to, I couldn’t look away.

I was overwhelmed.  Everywhere I looked, all that I smelled, was an assault on my senses.  My ears were even ringing, nearly drowning out the heavy thud of my heartbeat as it raced out of control.

Something on the window sill drew my eye.  It was an ear.  My knees went weak and I reached for the doorjamb to steady myself.  I closed my eyes for a second, certain that I really was going to either puke or pass out.  When I opened my eyes again, the room was rocking like a row boat and my feet had apparently become glued to the floor.

I forced my eyes away from the ear, but every place they stopped held some other atrocity—a mandible in the closet, some black-tipped toes in the corner, another ear, a woman’s leg.  Finally my eyes came to rest on a slender arm just inside the bathroom door.  One black-tipped finger was bent at a sharp, unnatural angle, obviously broken.  The hand was frozen back on the wrist, palm out in the universal stop sign.

I stood, rooted to the spot, desperate to get away yet unable to move.

Finally, after I’d spent what felt like an eternity in that room, my muscles began to twitch.  I took that as a sign that they had rebooted and were preparing to move.  As soon as my arms would work, I took full advantage.  I pushed off against the doorjamb, propelling my body back out into the hallway and away from the room.

I made my way down the steps as quickly as I could, my shaky legs struggling to stabilize my weak knees.  Rather than stopping when I reached the ground floor, I kept going—right on out the front door.  I didn’t stop until I was seated on the stoop outside, cell phone in hand, 911 on the line, head tucked firmly between my knees, willing myself not to vomit.

Rainn must’ve heard my rocky descent.  I saw her platform shoes first when she appeared at my side.  Then I felt her palm on my back as she bent to speak softly into my ear.  “Cat, what is it?”  Concern was evident in her voice.

The soothing tones of the 911 operator came on the line, prompting me for my emergency.  As I described what I’d witnessed, I heard Rainn gasp and knew she needed no further explanation.

Thanking God that my clients had obviously run into traffic, I hung up from the 911 operator, picked the Larson’s number from my address book then handed the phone to Rainn before pressing the send button.

“Oh, no.  I’m going inside to see the freak show.  You can drop that bomb all by yourself,” she said, standing and backing toward the house.

She stared at me for several long seconds before giving in with very little grace.  “Al
right,”
she blustered, grabbing the phone from my hand and mashing the send button.

I listened as Rainn, quite the performer, gave my clients the PG version of what I’d seen, assuring them I’d be calling to schedule another appointment to show them some different homes.

By the time she hung up, two marked sheriff’s department cars were pulling into the driveway.

We both looked toward the deputies as they emerged, in unison, from their cars and made their way across the lawn to where I sat on the steps.   Both officers were thick and stocky and clean shaven, the pale tan of their uniforms nearly matching their skin tone.  The last vestiges of daylight gleamed on the domes of their slick heads.

The closer they got, the further Rainn backed away, clearly indicating she was
not
the person with whom they needed to speak.

“Are you Ms. Deen?”  The two deputies flanked me, the one on the left taking the lead.

“Bivens.  Caldwell,” the deputy on the left said, indicating he was Bivens and the other was Caldwell.  “You call in a homicide?”