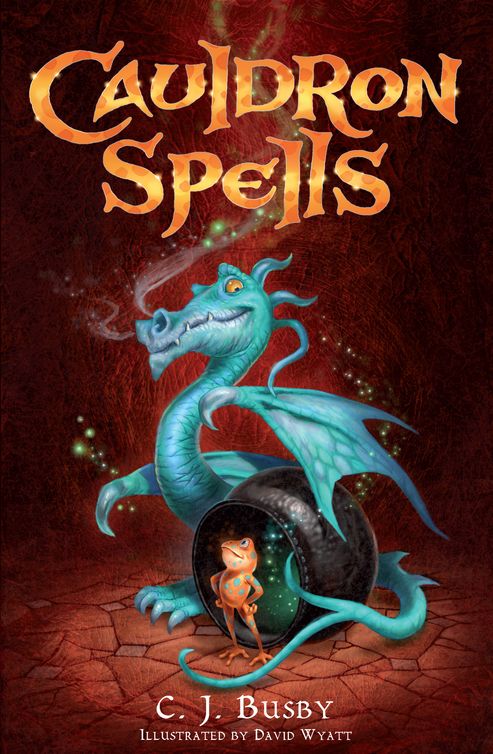 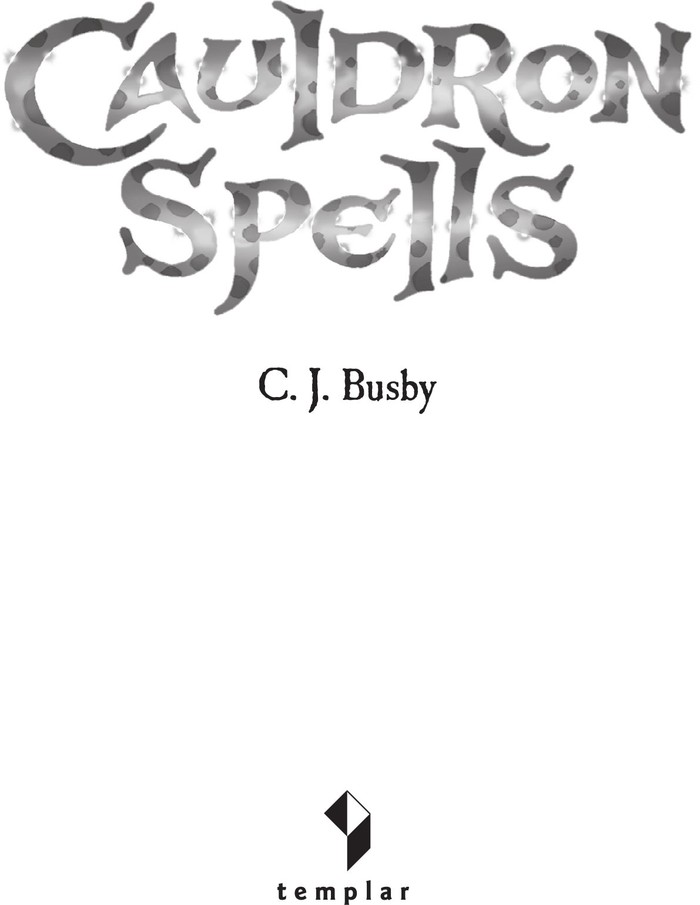 A Traveller in Disguise

The Treasure of Annwn 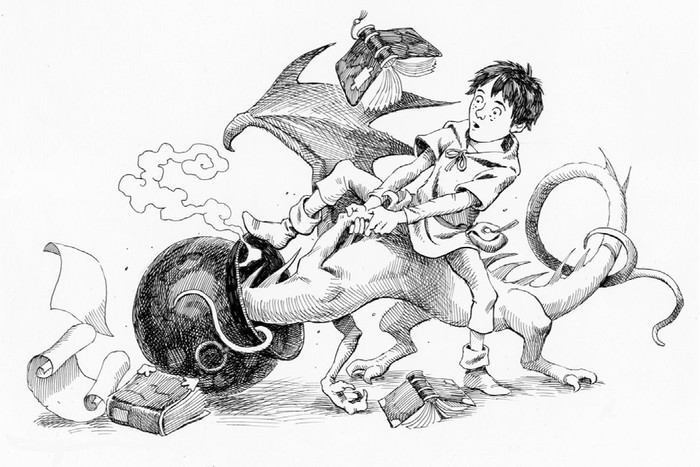 I
f Adolphus the dragon had not fallen through the trapdoor and landed head first in Max’s cauldron, then the cauldron would not have ended up severely bent out of shape, and maybe Max’s spells wouldn’t have gone quite so spectacularly wrong. He certainly wouldn’t have needed to go looking for a new cauldron, and that was really what saved them all.

Max was down in the cellar of Castle Perilous, packing, and he was as nervous as a cat at a rally of wolfhounds. Tomorrow he was leaving for the castle of the icy sorceress, Morgana le Fay, to study at her summer Spell School, and he wasn’t at all sure he’d survive the experience. Last time he’d seen Morgana, it was just after he’d turned her into a frog and helped foil her wicked plot to overthrow King Arthur. Max didn’t think he was exactly her favourite person at the moment, and he couldn’t stop thinking about what might be waiting for him at her castle in Gore. So when Adolphus catapulted through the cellar ceiling, he nearly died of fright on the spot.

“Aaaarrghh! Help! Fire! Thunder! Sorcery!” he shrieked, scrambling to the furthest corner of the cellar, before stopping and peering through the gloom at the struggle going on in front of him. Max’s spell books and carefully packed bags had been knocked in all directions, and his cauldron was rocking wildly back and forth while two large clawed feet and a
blue-green
scaly tail waved frantically from the top of it.

“Adolphus!” shouted Max, his fright turning to a mixture of anger and exasperation. “You dozy dragon! Look what you’ve done to my packing!”

“Aarrhh… mmphh… blurgh,” came a muffled voice from the depths of the cauldron. Having once been turned into a frog, Max could now understand animals’ speech – but he didn’t need any special ability to guess that Adolphus was saying something like, “Help! Get me out!”

Just as he started to pull at the dragon’s back legs, a small head appeared above him, peering through the splintered wood of the trapdoor. A small head with long dark plaits and a worried expression. It was Max’s younger sister Olivia, Adolphus’s owner.

“Is he all right?” she asked, trying to see into the gloom.

“Mmmphh!” said Adolphus loudly, at the sound of her voice, and swished his tail enthusiastically, whacking Max across the head and sending him flying.

“Oops!” said Olivia, as she saw Max sprawling
on the straw next to a pile of upturned boxes. “I’d better come down.”

A few minutes later they had managed to haul Adolphus out of the cauldron. He bounded around the cellar thanking them while Max examined his cauldron anxiously.

“What on earth were you doing?” he asked, looking up at the hole in the trapdoor.

“Um – Adolphus was hanging upside down on a roof beam, pretending to be a bat – but he fell off and went right through the trapdoor.”

Max raised his eyebrows with a sigh.

“I’m really sorry about the cauldron. Is it all right?”

“Shouldn’t think so,” said a voice. It was Max’s pet rat, Ferocious, who had poked his head out of Max’s tunic and was casting a professional eye over the cauldron. “Nope. Definitely got a list to the left. And a bulge. And a few dents. Never do a decent spell again, if you ask me.”

“Do you really think so?” said Max in despair.
“Mum’s going to kill me. I only got it last month after I burned the bottom out of my last one.”

They looked at the dragon, who was happily sniffing around the cellar looking for woodlice to eat. Lady Griselda Pendragon was quite mild-tempered most of the time, but Adolphus had been trying her patience lately.

“He broke her best broomstick last week,” said Olivia. “And he ruined her sunshine spell for the haymaking. It rained all afternoon. We can’t tell her, Max – she said he’d have to
go
if he broke anything else!”

Adolphus looked up from his search and waved his forked tail.

“Go?” he said happily. “Go where? Are we going somewhere? Can I come? What fun! Whoopee!”

Max sighed. Adolphus was totally brainless, but, along with Ferocious, he had been through quite an adventure with them. He’d helped them when Max
first discovered his unusual frogspell and accidentally turned himself, Olivia and Ferocious into frogs; he’d helped them escape from Camelot when they were trapped there by Max’s worst enemy, Snotty Hogsbottom; and he’d helped defeat King Arthur’s scheming half-sister, Morgana le Fay, who wanted the throne for herself. Max couldn’t let Lady Griselda banish him. He would just have to take a bent cauldron to the Spell School in Gore.

“All right,” he said. “I won’t tell. We’d better clear up the mess and mend the trapdoor.”

“Bad decision, you mark my words,” said Ferocious darkly from the depths of Max’s tunic.

But he was wrong. It was Max’s decision to take the bent cauldron that probably saved his life. That, and Olivia’s ongoing campaign to train as a knight.

Olivia’s campaign had not been going well lately, as her father was still adamant that girls could not be knights. However, Sir Bertram Pendragon was feeling more than usually benevolent that morning. The previous day
he’d had a marvellous time hunting (caught nothing, as usual, but he’d been the last knight standing at the celebratory mead-drinking contest afterwards, and that always put him in a good mood). A brief glance in the mirror had told him that his moustache was now officially the most magnificent in Castle Perilous and quite possibly bushier than that of Sir Lionel of Leogrance, who held the current record for the kingdom. And to top it all, his favourite horse, Daisy, was now fit as a fiddle and prancing round the meadow, having recovered from a sad bout of knee strain after their last jousting competition.

So when Olivia caught him in the Great Hall and begged, yet again, for the chance to train as a knight, he didn’t immediately bellow “Over my dead body!” and storm out of the castle. He sighed, sat down in the great chair by the fireplace and gestured for her to sit beside him.

“Olivia, my dear,” he said. “You are my favourite daughter—”

“Your only daughter,” put in Olivia.

“Well, yes, indeed. My only favourite daughter, whom I love dearly. But I’m afraid it’s simply not possible. Girls are not knights. They can’t fight.”

“I can fight better than Max.”

Sir Bertram sighed again. It was true that his son Max was a bit of a disappointment as a squire. And it was true, too, that Olivia, though two years younger, was already almost as tall, quite as strong and a lot more fierce. If she ever got any serious training, Sir Bertram thought, she’d be a total menace. But he couldn’t really tell her so or there’d be no stopping her.

He put on his most serious expression and said sternly, “You are supposed to be a lady. Ladies don’t fight. Nor do they push people in the duck pond. Nor do they steal a horse and win the squire’s gallop in disguise.” He tried to sound disapproving about that particular escapade, but couldn’t stop a note of pride entering his voice. She really was a fearless rider, he thought. It was a pity she hadn’t been a boy. But still. The rules were clear. Girls could not be knights.

Sir Bertram frowned at her. It was true; he rather liked breaking rules. And it was also true that it would be rather wonderful to have a magnificent moustache
and
a daughter who was training to be a knight. Should he let her have a go?

Olivia sensed his hesitation. It was the moment she’d been waiting for. It was her best chance to strike a deal.

“Father. If I can win the Squires’ Challenge in September, will you promise to let me train to be a knight?”

Sir Bertram blinked. What? The Squires’ Challenge? The most prestigious competition for novice squires in the kingdom? He couldn’t help it; he burst out laughing so hard he nearly choked on his moustache.

“Olivia! My dear child! What an idea! You wouldn’t even be allowed to enter…”

“Yes I would,” said Olivia, ignoring the display of mirth. “I could disguise myself as a boy. All you have to do is sign to say I haven’t been training for longer than a year. Which I won’t have.”

“But you haven’t been training at all!” said Sir Bertram, still hiccupping and spluttering. “You’ll end up in the manure heap after the first bout…”

“Well then – you won’t have to worry about me training as a knight, will you? And I promise, if you give me a chance and I fail, I’ll never ever mention it again!”

This was her trump card. Olivia had been pestering Sir Bertram for three whole months, and it had all been for this moment. The moment she held out the possibility of peace and quiet – in exchange for one chance of getting what she wanted. It was a master plan. Sir Bertram saw a future of blessed peace, of a new, demure and ladylike Olivia, and he took the bait instantly. After all, there was less likelihood of Olivia
winning the Squires’ Challenge than there was of the castle duck pond freezing over in August. And if by some miracle she did it – well, she really would deserve to be trained.

“Done!” he said, and they shook hands on it. Olivia was almost fizzing with excitement. The first stage of her plan was complete. Now she only had to get the second stage sorted and she was on her way to being a knight!