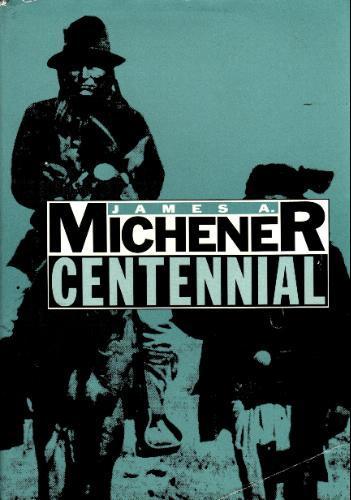 “Michener is a superb storyteller. ... This is an absorbing work.”

“It is certain that CENTENNIAL will be one of the great bestsellers of the decade, if not of the century.”

“It is much more than a novel. ... Spectacularly written.”

“Big and engrossing novel. ... An engrossing book, an imaginative and intricate one, a book teeming with people and giving a marvelous sense of the land.”

“It is a hell of a book. ... While he fascinates and engrosses, Michener also educates as he has done in the 18 books which preceded CENTENNIAL.”

by James A. Michener

UNABLE TO FIND THESE OR OTHER FAWCEIT PAPERBACKS AT YOUR LOCAL BOOKSTORE OR NEWSSTAND?

If you are unable to locate a book published by Fawcett, or if you wish to see a list of all available Fawcett Crest and Gold Medal titles, write for our FREE Order Form. Just send us your name and address and 25¢ to help defray postage and handling costs. Mail to:

(Orders for less than 5 books must include 60¢ for the first book and 23¢ for each additional book to cover postage and handling. Orders for 5 or more books, postage free.)

by arrangement with Random House, Inc.

All rights reserved, i
ncluding the right to reproduce

this book or portions thereof in any form.

All the characters in th
is book are fictitious, and any resemblance

to actual persons living or dead is purely coincidental.

Selectio
n of the Book-Of-the-Month Club

Selection of the Playboy Book Club

who showed me the rivers;

who taught me about cattle;

who introduced me to the prairie.

This novel deals with a subject that has concerned me since 1936, when I first came to know the South Platte River. Writing it has been one of the happiest experiences of my life. for it put me in contact with many learned and perceptive people. Among the many to whom I am indebted are these specialists:

Geology
: Roger Cuffey and Lauren Wright, Pennsylvania State University; the latter took me on an extended field trip of the Rockies; Gerald Richmond, William Mallory, U. S. Geological Survey; Jack Murphy, Denver Museum of Natural History, who took me on a field trip to dinosaur deposits, Robert Egbert, Phillips Petroleum, who provided preliminary data for the core diagram of Centennial; and especially Ogden Tweto, U.S.G.S., foremost authority on the Rockies, who provided line-by-line checking of the text and the core diagram.

Early Man
: Frank Frazier, Denver; George Frison, University of Wyoming, who took me on an extended field trip to prehistoric Clovis sites; H. M. Wormington, Denver, who allowed me to read the manuscript of her forthcoming book.

Fort Laramie
: Charles Sharp, Lewis Eaton, Bill Henry, all of Fort Laramie, who showed the most devoted patience in helping on research and field trips; Roger Kent Heape, Belleville, Illinois, who allowed me to read his unpublished thesis on the Treaty of 1851.

Birds
: Gustav Swanson, C.S.U., who took me on a beautiful exploration of the Buttes area.

Dryland Farming
: Isabel Blair, James Reed, Dora Good, all of Sterling, Colorado, the last of whom took me on an extensive field trip to an old line camp.

No city could have been more pleasant to work in than Denver, except for repeated traffic tickets, the worst winter in 170 years, the hottest summer in 87, and the nation’s most galling gas shortage. Alys Freeze, Western Collection, Denver Public Library, provided invaluable help and so did the entire staff of that estimable institution.

During my research I was aided at different and crucial times by two gifted members of the
Reader
’s
Digest
staff: Leslie Laird, who had earlier helped me on my book on Kent State, and John Kings, who had for some years been a rancher in Wyoming. Tessa Dalton provided much expert guidance on wildlife. These three accompanied me on extensive field trips to Mexico, Texas, New Mexico, Arizona, Nevada, California, Utah, Idaho, Montana, Wyoming, Nebraska, Oklahoma, Kansas and Missouri. All three were good drivers, amiable storytellers and opposed to smoking.

THE MANY COUPS OF LAME BEAVER
3

7. Invading the Camp of Strange Gods
3

THE WAGON AND THE ELEPHANT
3

A SMELL OF SHEEP
3

Nina Coombs Pykare by Dangerous Decision
Sons and Lovers (Barnes & Noble Classics Series) by D. H. Lawrence
Defender by Catherine Mann
The Wench is Dead by Colin Dexter
Caught Forever Between by Adrian Phoenix
All Because of You (Lakeview #2) by Hill, Melissa
Treasure Sleuth by Amy Shaw
A Killing Moon by Steven Dunne
The Forge in the Forest by Michael Scott Rohan
Lost Treasure of the Emerald Eye by Geronimo Stilton
Our partner