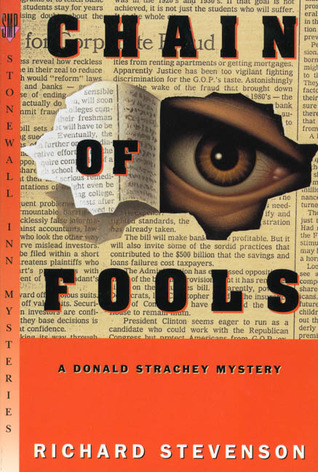 Copyright © 1996 by Richard Stevenson All rights reserved Printed in the United States of America No part of this book may be used or reproduced in any manner whatsoever without written permission except in the case of brief quotations embodied in critical articles or reviews For information, address St Martin's Press, 175 Fifth Avenue, New York, N Y 10010

Chain of fools / by Richard Stevenson

For Sydney and Zack

One's a good chain and one's a bad chain," Skeeter Mc-Caslin eerily intoned from his hospital bed. "One's a daisy chain and one's a chain of fools." His dark eyes were bright with fever, and he looked suspicious and terrified and cunning all at the same time.

Timothy Callahan and I glanced at each other over our gauze masks, then looked back at Skeeter.

"But when you called the other day," Timmy said, "you told me a friend's life was in danger—a woman at the newspaper in Edensburg. Why don't you tell Don and me about that, Skeeter? You were right to call. I'm really glad you did, because Don might be able to help."

Skeeter's jaw tightened under his stubble of black beard, the whiskers an indication not of fashion but of illness, and he scowled. "I just
told
you, didn't I? Now I am going to tell you
one . . more . . time.
One's a good chain, and one's a bad chain. One's a daisy chain, and one's a chain of fools."

After a little pause, Timmy said, "Chain of fools?"

Skeeter did not rise up from his pillow—he was obviously far too sick and exhausted for that—but he cocked a bushy eyebrow and said, in a voice dripping acid, "Do I have to repeat myself a
third
time? One's a—"

"I'll be right back," Timmy said. He got up and walked out into the corridor.

I said to Skeeter, "Your friend who's in danger—is her name Aretha?" His eyes burned with contempt. I was a moron. I asked, "Is it Buchanan? As in Daisy Buchanan?"

"You're an even bigger idiot than your boyfriend is," Skeeter said.

He gave me a look indicating that I was as useful to him, and as appealing, as the uneaten dun-colored roast beef and bile-green string beans on the dinner plate at his bedside.

"Skeeter, I have a feeling you're not yourself tonight," I said. "Timmy always spoke well of you, and I hope we can get to know each other when you're feeling better. Then we can sort this thing out—whatever the situation is that led you to believe that your friend might be in need of a private investigator. Okay?"

Skeeter grinned dementedly. He said, "Did Timmy tell you about my birthmark?"

"Timothy sure did love that birthmark."

Timmy came back into the room, trailing a nurse. She barged over to Skeeter, peered at the numbers on his IV-drip monitors, jiggled something, and said loudly, "Mr. McCaslin, how ya doin'?"

"One's a daisy chain, and one's a chain of fools."

"Uh-huh. Hmm." Now she was examining the label on one of the -drip bags. She said to Skeeter, "How long have you been on this?"

"That was before the admission into the union of Alaska and Hawaii. But I still stand up and salute when I'm not sick as a dog."

"Well, they might have to change this one med. I'll have to talk to the doctor about it. Who's your attending? Baptiste?"

"I'm just a simple forest ranger from Edensburg. I call him Baptist. Or Evangelical Lutheran."

"Well, you have a nice visit with your friends." The nurse turned and sped away, and Timmy sped after her.

Skeeter looked over at me balefully and waited.

I said, "Where's the birthmark?"

"Timmy considers himself lucky to have hooked up with you, Skeeter. For most gay kids, high school is hell. I'm sure it was hard in a lot of ways for you too—not feeling as though you could be open about your relationship and all that. But at least you two knew exactly who you were and what you wanted, and you had each other. That's unusual."

"I got that, Skeeter. I just wish I had a clue as to what the hell you're talking about."

Timmy returned. "Skeeter," he said, "you're on a steroid drug that's affecting your mind. Now that the Pneumocystis is under control, maybe they can change the medication. The nurse is going to check."

"It's
your
mind that's affected, not mine," Skeeter said. "You could cut my heart out, the way you did the last time, and plead temporarily asinine."

"I think maybe we should come back tomorrow," Timmy said, his face coloring. "And then you'll be in better shape to talk about whatever you called me for on Thursday. Would I be wasting my breath if I asked you one more time to explain to Don and me about the good and bad chains, and how they're connected to your friend whose life may be in danger?"

"Gotcha. I guess we'll head out then."

"I'm glad I finally got to meet you, Skeeter," I said. "I know it means a lot to Timmy too to be reconnected with you after all these years."

I asked, "When was the last time you two saw each other?"

Skeeter said, "September second, 1963, four-twenty
a.m.
I still have his taste in my mouth."

Timmy blushed some more and said, "You've got a mighty long memory, Skeeter, or poor habits of oral hygiene. Anyway, you and I can do some catching up when you're feeling better. Which will be soon, I hope. I want to hear all about your life in the wilderness. I think

that's great—all you ever wanted to be, when we were kids, was a forest ranger, and that's what you went ahead and did. I'm impressed. Maybe even a little envious."

"Now you're impressed. Then you were undressed."

Timmy said, "Skeeter, your tact mechanism is on the blink, so I think Don and I will be going now. There's no point in our hanging around any longer tonight. We'll come back this time tomorrow and with any luck you'll be better equipped to explain why you think your friend's situation is dangerous. I hope you can get a good night's rest. Hospitals certainly aren't restful places. In that sense, they're terrible places to have to go when you're ill."

"They killed Eric and now they're trying to kill Janet," Skeeter said in a matter-of-fact way.

Timmy had given Skeeter's arm an affectionate squeeze and was preparing for his exit, but now he stared down at the man he called his "old high-school friend." On those rare occasions when he mentioned Skeeter McCaslin at all to me, Timmy had never used the term "lover." He'd once said it was too suggestive and sophisticated a word for a couple of sex-crazed adolescents in early-Beatles-era Poughkeepsie. Yet their two-year affair, which ended only when they graduated from high school, was carried on with high degrees of both stealth and emotional heat. If "lovers" was too grown-up a term for what Timmy and Skeeter had been to each other, "friend," or even "sexual friend," was clearly insufficient. "Boyfriend" wasn't right either—this was more than a decade before same-sex couples began showing up at the proms together. On this point, the language 'was as inadequate as the times had been.

Timmy let go of Skeeter and gazed down at him uneasily. The man in the bed was gaga—temporarily, we'd been assured—and assigning meaning to his utterances, or inviting additional ones, seemed risky.

Boldly, I said, "Who was Eric, Skeeter? And who is Janet—the one they are trying to kill?"

Timmy said, "Skeeter, I guess you can't help it, but saying that over and over is not useful. I think we're going to have to wait until your

mind clears. Listen, old friend, we'll be back tomorrow. So you just hang in there and—"

"Eric was my lover," Skeeter said, "for eleven years. Eric Osborne, the famous eco-freak and prize-winning nature writer. When Eric won a Polk, he even knew who Polk was. To me, Polk was a pig in a poke. I said, 'Who's Polk?' and Eric knew. Eric knew puh-lenty. Eric knew me, ho ho—read me like a book, wrote me in a book. And I knew Eric like a mountain knows a polecat. Eric was the second great love of my life. But they killed him, on May the fifteenth, and now I'm going to die alone."

As he said this, a big, blue-eyed, long-faced woman with freckles and a sun-bleached mess of straw-colored hair strode into the room. From behind her surgical mask, she said, "Eldon, you are neither alone nor dying, just having a little psychotic episode. But you'll get over it. Hi," she said, offering Timmy, then me, a latexed hand. "I'm Janet Osborne, a friend of Eldon's."

"Don Strachey—I'm with Timothy. Are you one of the
Edensburg Herald
Osbornes?"

"I edit the paper. Are you the private investigator? Eldon told me his high-school main squeeze was now the partner of a private detective and he was planning on contacting you."

"I was Eldon's only squeeze in high school," Timmy said, "unless you count Carol Jean Nugent in ninth grade. Right, Skeeter?"

The man in the bed said, "Guilty. Guilty as charged."

"Eldon, I never knew you had such an adorable nickname when you were a kid. Was Eric aware that you were once a Skeeter?"

"And you work for the legislature, is that right, Timothy?"

"Eldon said he'd once read a piece in
Cityscape
about the two of you—a well-known gay-couple-about-Albany—and when he decided that I might be in need of a private eye, he remembered you two. Though my suspicion is, he mostly wanted to satisfy his curiosity about what had become of his first great love."

"I didn't even know Skeeter was in the area," Timmy said. "We hadn't been in touch at all since high school."

"Instead of staying with me, he gave himself to the Mother Church," Skeeter said. "What he gave me was the Poughkeepsie royal kiss-off."

"By that, Skeeter means I went off to Georgetown, where I majored in political science."

Skeeter said, "Now it's thirty-two years later and he's still the ail-American Irish hunk with milk-white skin and hair as soft as eiderdown, and me, I'm a dead duck."

"Eldon, you're a long way from dead," Janet said, "and the nurse says you're making steady progress."