Chains of Frost: The Bellum Sisters 1 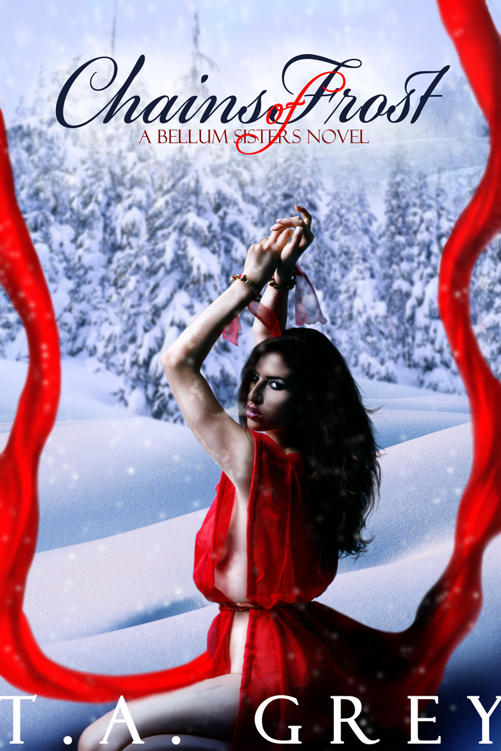 by T. A. Grey at
Smashwords

Acclaim
for The Bellum Sisters:

“
Having
never read a novel by this author before, I was delighted to pick up this
novel. It [Chains of Frost] is extremely fast paced and never slows down. The
story flows beautifully together, and will lead perfectly into the second
novel. This is a truly enchanting novel that will grab the interest of readers
everywhere and will not let go.
”

“
It
[Bonds of Fire] is a wonderful story, moving fast and never stopping for
anything. It ties in beautifully to the previous book, with the stories
blending with each other, and working together to build the third novel, which
is forthcoming. Romance lovers everywhere will adore this book (and the series)
as much as I have.
”

“
The
Bellum sisters are a handful for sure and it
’
s their feistiness that creates sparks for the males
who have recently
“
acquired
”
them. Bravo!! Five stars to T.
A. Grey for a series I am dying to continue.
”

WARNING
: The content in this book
contains explicit sexual content. This book is intended for mature audiences
only. It contains sexually explicit scenes that may be offensive. Please keep
your file in a safe area on your computer and away from minors.

This
book is not transferable. If it is sold, shared, or given away it is
infringement of the copyright of this work and violators will be prosecuted to
the fullest extent of the law.

This
book is a work of fiction. All characters, names, places, and scenarios are
solely the product of the author’s imagination or are used fictitiously, though
reference to actual events or locations may be real.

Any
trademarks mentioned herein are not authorized by the trademark owners and do
not in any way mean the work is sponsored by or associated with the trademark
owners. Any trademarks used are specifically in a descriptive capacity.

I’d like to thank LuMary for
taking the time to help make this book shine and Mae I Design for creating this
wonderful book cover. Also, a special thank you to Lea Ellen for her
excellent editing skills.

idummi
– A bottom
feeding demon from the deepest layer under the rift. They are aggressive,
easily manipulated creatures with poisonous talons.

host
– A vampire whom uses a
frimar.

lilit
– A demonic term
for a succubus.

new
moon – The time when a succubus grows into sexual maturity.

Protector
– A male in charge of protecting and caring for a succubus.

rift
– The division between earth and the nether-realm where demons of many kinds
reside.

And to the eldest

I bequeath to you our home in
Colorado

for I know you love the snow and
cold winter nights;

command that on the day of your
birthday

you will be delivered to

Champion of the Vampires and
Protector of Humanity,

to be Protected by,

to facilitate a relationship
with,

and to mate and breed with.

Signed, dated and ordered at the
event of my death,

The copy of the will crinkled
like dried paper in her hands. Chloe Bellum read over the lines for the eighth
time, wondering if she could change the words on the page with enough passes.
When she looked up at her two sisters, she realized she wasn’t alone in her
complete and utter shock.

Her fraternal twin, Willow, wore
an angry scowl that Chloe recognized. She was about to throw something. Leaning
away from her twin, Chloe watched her younger sister’s response. Lily looked
confused but not nearly as outraged as she and her twin felt right now. Maybe
the news in her part of the will was not so…unbelievable.

“Okay, who’s going first?” Chloe
spoke at the same time her twin said, “What the fuck?”

“Lily, what does yours say?”

Her eyebrows shot up and she
smiled with a shake of her head. “No way. You’re the oldest. You go first. I’m
not starting this dig graving festival.”

Chloe looked down at the sheet of
yellow parchment in her hands and winced. Was it too much to hope that it would
just disappear from her hands? First Papa was killed in a terrible accident and
now this, written in his own hand no less! It was insanity.

Chloe put on her ‘big sister’
hat. “It says that Papa wants me to have the house in Colorado since I love the
snow.” Her voice thickened with emotion and immediately her sisters’ eyes
mirrored the emotion. “He also has
commanded
me to the ownership of
Tyrian en Kulev.” Collective gasps and curses sounded.

“The leader of demon slayers? The
cold-hearted son of a bitch that would just as soon eat your heart if he was
hungry?” Willow sputtered.

A cold knot was building in
Chloe’s stomach. She felt torn between running to the bathroom to throw up her
dinner and falling on the floor in a fit of hysteria. With her sisters here,
she was left with the mature choice—vomiting. Rubbing a hand over her stomach,
she tried to soothe her uneasiness.

“Lily, do you think what they say
about him is true? That he really did kill his wife and children? I heard that
even his own army fears him.”

Lily’s big eyes widened. “I’ve
heard all the same things as you two, but I doubt the rumors. What I don’t get
is why Papa would give you to him. This is so unlike him that I can’t even
believe it. I never saw this coming.”

Chloe nodded. Lily sometimes ‘sensed’
things in dreams. Her visions had about a 50% chance of coming true.

“No shit,” Willow said, her
entire foot now bobbing against the floor. “What’s the point in raising us to
overcome the misogynistic, patriarchal ways of our kind if, when he dies, he
literally gives us away to some random man?”

Chloe shot her a startled look.
“He did the same to you?”

A tight nod was her response.

Willow’s hand tightened into a
fist, smashing the will in her hand. “Someone who will never get me.”

“It says Alpha Lyonis Keelan,
Leader of the Shapeshifters.”

Chloe gasped. “Let me see that.”
She had to pry the crumpled paper out of her sister’s fist finger by finger,
but she finally got it. She read over the will with wide eyes. “Oh my God.
That’s
the
Alpha. Like the leader and all-powerful shapeshifter in the
world. Can take multiple forms, has never been bested in a fight.”

“Yeah, yeah, yeah. If you like
him so much why don’t you take him,” Willow said.

Chloe understood her sister’s
anger and even her reticence. Inside, Chloe felt a deep fear that would have
her trembling if not for the company of her sisters. Willow was untamable—a
rebel in every sense of the word. To partner her with an Alpha shapeshifter, a
man bound to be dominating and controlling, well, Chloe felt for her sister.
She also wouldn’t mind being there to see it happen. Front row tickets, please!

“What does yours say, Lily?” Not
only was she dying to know, but she really wanted to give Willow some breathing
room. She was about to tap a hole through the floor.

Lily cleared her throat, opened
her mouth to speak, then blushed. Chloe nudged Willow who turned to glare at
her, but when she nodded toward Lily, they both broke out into grins.

“Dish now,” Willow commanded. It
was good to hear laughter in her sister’s voice. Since Papa had died, none of
them had been laughing. And now with this…

Lily lifted paper to cover her
mouth and muttered something.

“What was that?” Chloe inquired
with a grin.

“Speak louder!” Willow said, her
lips twitching with a smile.

Lily lowered the paper slowly and
visibly swallowed. “He has ordered that on my 29th birthday, I am to be given
to Telal Demuzi. He is my Protector.”

Chloe recognized the name. Who
the hell didn’t? But trying to wrap her mind around it was an entirely
different feat. Willow recovered first and came to a stand.

“A demon!
The
demon? Papa
has given you to a demon. This is…this is insane. Pure fucking crazy. First the
vampire killer, then that stupid Alpha, and now a demon. I can’t believe any of
this. He’s not going to get me. He’s not going to get any of you. Dammit, think
of something, you guys. Are we sure Papa wrote this? This is not the Papa I
knew, that’s for damn sure. This can’t be right.” Finally tired of her tirade,
she collapsed back onto the sofa.