Change of Heart (The Flanagan Sisters, #2) 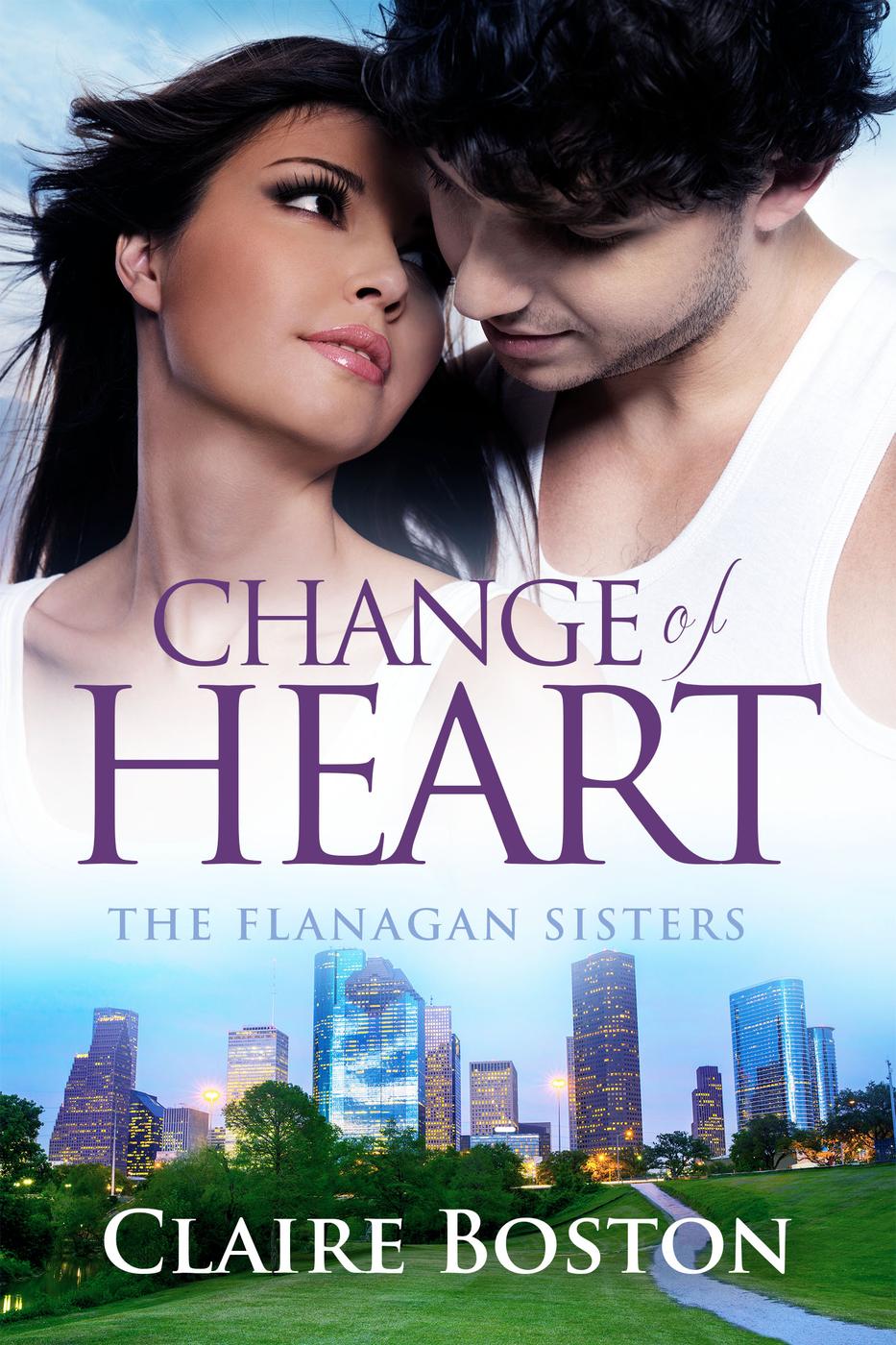 What Goes on Tour

About Change of Heart

S
oftware billionaire Carly Flanagan has an abundance of everything except time.

With everyone wanting a piece of her, or more accurately, her money, she spends her days trying to live up to her company's motto of Community, Sharing, Support. Having always been so focused on responsibility, success and supporting those less fortunate than her, Carly’s forgotten to consider what she wants for herself in life – until she meets Evan.

Evan Hayes is an artist and free spirit, and when they meet at a local art exhibition, he is immediately intrigued by Carly. He sees through her public persona, realizing she is not the person she portrays. Evan’s the type of man who doesn’t have a lot, but is perfectly comfortable with who he is. A man who knows what he wants – and he wants Carly.

Carly is sure Evan wants something else from her. Everyone does. All Evan is asking is the chance to get to know her, but will Carly let him in? Or will a lifetime of protecting herself prove too hard to overcome?

First published by Bantilly Publishing in 2016

All rights reserved. This publication (or any part of it) may not be reproduced or transmitted, copied, stored, distributed or otherwise made available by any person or entity (including Google, Amazon or similar organizations), in any form (electronic, digital, optical, mechanical) or by any means (photocopying, recording, scanning or otherwise) without prior written permission from the publisher.

Change of Heart: The Flanagan Sisters 2

To my sister-in-law, Shelly

C
arly Flanagan really couldn’t appreciate what accounted for modern art these days. She stared at the canvas in front of her, keeping her expression blank. There were several splotches of color, as if the artist had flicked his paintbrush at it haphazardly. The price tag was in the four figures. She suppressed a sigh and moved on to the next painting, which was more of the same. She didn’t know why she’d agreed to sponsor the exhibition.

That wasn’t true. She knew exactly why – her younger sister Zita had asked her to. The problem was, Zita was too kind-hearted and people took advantage of her. As soon as they discovered she was Carly’s sister, the requests started coming and Zita could never say no. Carly needed to start vetting some of Zita’s requests – if she could find the time.

Taking a glass of sparkling water from a passing waiter, she moved to the next piece. She didn’t check her watch, but figured she had about another hour before she could gracefully depart.

“It looks like someone vomited on the canvas.” The deep voice was close to her ear and Carly looked up.

He wore a dark brown pinstriped suit that molded to his body, the jacket accentuating his broad shoulders. It was an odd choice for an exhibition opening where most people were wearing tuxedos and evening dresses. Her gaze reached his face. He was around her age – late twenties, early thirties – and his longish black hair had been smoothed back, with the occasional hair resisting the gel. Carly met his eyes – green, clear, and with a definite spark of mischief in them. Her heart stuttered and she refocused to recall what he had said.

“Art is in the eye of the beholder,” she replied, losing her fight not to smile at him. She had to be careful. She’d learned early in this business not to trust what people said. He could be a reporter baiting her, or an artist looking to curry favor.

“I’d rather not behold that, especially at that price.”

She agreed with him, but kept that to herself. “Then why are you here?”

“I like art,” he said, gesturing to a different painting.

Carly followed the direction of his hand and her breath caught. It was a forest scene, with huge trees soaring to the sky, and a tiny cottage nestled below them, a puff of smoke coming from the chimney. She wandered closer and details jumped out at her. The chipmunk on a branch, the mountain lion almost hidden by some bushes, the small white flowers of a creeper twining its way across the porch. She could practically smell the forest.

It was peaceful, secluded, comfortable. It was a home.

The longing swept through her. She wanted it. Not just the painting, but the place. It whispered peace to her. She wanted to reach out and touch it, and had stretched her hand out before she stopped herself.

Carly shook her head absently, still caught up in the painting. “Not see,” she said. “Feel.” She blinked and snapped out of her trance. Would he judge her?

The man’s eyes were guarded. He raised his eyebrow and nodded for her to continue.

The temptation to tell him was strong. The way he looked at her, his full attention on her, waiting for her next words, made her want to trust him.

Then he smiled, a small, but knowing smile. Her whole body heated, and the shock of her reaction brought reality back into sharp focus.

No. She wouldn’t expose herself further. Anything she said could be on the pages of a glossy magazine next week.

“Excuse me.” Not waiting for his response, she strode across the room to the gallery owner, trying to get her heart rate under control. It was probably just her reaction to the painting. Men didn’t affect her that way, not since Andrew. She shook her head. She’d put him behind her.

“Carolina, thank you for coming tonight and for your support.” Stewart Williams was an older man with salt and pepper hair and impeccable posture.

Carly straightened at her full name, remembering who she was supposed to be. “You’re welcome,” she said, smiling. “It’s a wonderful exhibition. In actual fact, I’d like to buy a painting.”

Stewart blinked, but quickly recovered his composure, taking her by the elbow and leading her over to his desk. “Which one are you interested in?”

She hadn’t noticed the name of the piece, or the price, so she pointed to it, relieved to see that the man she’d been talking with had moved on.

“An excellent choice,” Stewart said, and excused himself to go and place a sold sticker below the artwork.

“Are you enjoying yourself, Carly?”

She turned to find Zita, looking gorgeous in a canary yellow evening dress with ruffles down the split like a flamenco dress. Her sister had inherited the height and strawberry blonde hair from their Irish father, whereas Carly was the spitting image of her Salvadoran mother.

“I’ve bought a painting,” she said, not quite believing it.

Carly gestured toward it.

“Your neighbor?” He was the reason Zita had asked Carly to support the exhibition.

She took Carly’s hand and dragged her across the room before Carly could refuse. She never knew what to say to artistic types, and certainly didn’t want to discuss why she’d bought one of his pieces. She was still trying to figure out a way to get out of it when Zita stopped in front of the man in the brown suit.

“Evan Hayes, meet my sister, Carly,” Zita said, dropping her hand and beaming at him. “She bought one of your paintings.”

He
was the artist? This man who had scoffed at other artists’ work and asked her what she thought of his? What game was he playing?

“We met, though we didn’t exchange names.” He smiled a little sardonically at her. “I hope you enjoy the painting.”

Carly nodded, not trusting her voice. She had a feeling she’d been played.

“Evan not only paints, but he also draws and does graphic design. I don’t think there’s a medium yet invented that he can’t work with.” Zita was clearly oblivious to the tension between them.

“I imagine each medium has its own challenges,” Carly said.

Before Evan could answer, Zita said, “Oh, there’s Rebecca. I have to catch her.” She hurried away.

Carly wanted to throttle her sister for leaving her with this man. She had to extricate herself.

“It’s all just putting an image down on canvas,” Evan said, and she realized he was responding to her previous comment.

Curious in spite of herself, she asked, “Isn’t it easier getting the color you want using paint rather than pencils?”

“Sure, but there are always workarounds.”

“You can layer color, and darken or lighten it using white and graphite. There are heaps of techniques.” He shrugged. “It just takes practice and patience.”

He didn’t speak like a lot of artists she’d met. Most of them liked to wax lyrical about their method and the difficulties of getting the right depth of color so the image came off the page. He made it sound like it was just part of the job. She moved over to another of his paintings on the wall. “What was the hardest thing about this one?”

He gave her a half smile, and then faced the painting. “Getting the idea.”

Her heart beat a little faster at his smile. She frowned, ignoring her physical reaction. “The idea?” Didn’t he paint what he saw? “Did you make it up?” She’d always assumed landscape artists looked at a setting and then recorded it.

“I wanted to paint something fun, but not frivolous.” He stepped next to her, not touching, but close enough for her to be very aware of his body heat.

She crossed her arms and examined the painting. It was a beach scene in the height of summer. People were gathered in groups along the sand; some were young families with children building sand castles, others were teenagers trying to look cool, and there were a few older couples reading books or people watching. At the edge of the water, people waded, a father helped his young daughter to swim, some kids splashed about, and further out, there were surfers waiting for the next wave. Carly could almost smell the salt air, and feel the heat from the sun and the sand beneath her toes. Many people would look at the painting and see fun, but it reminded her too much of El Salvador when her father was still alive, and the time he took the whole family to the beach for a special day out. All she saw were days that would never be again.

“You don’t feel it,” Evan said. “You feel something else.”

She didn’t like him being able to read her so well. She had spent years sculpting her public persona. She’d thought she had perfected the confident, polished lie.

“Old memories,” she said, and looked for a way to escape.