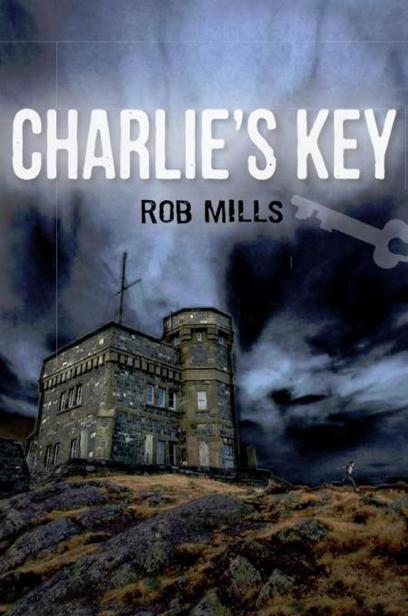 Summary
: A young orphan struggles to unlock the significance of an old key left by his dying father.

Orca Book Publishers is dedicated to preserving the environment and has printed
this book on paper certified by the Forest Stewardship Council.
®

Orca Book Publishers gratefully acknowledges the support for its publishing
programs provided by the following agencies: the Government of Canada through
the Canada Book Fund and the Canada Council for the Arts, and the Province of
British Columbia through the BC Arts Council and the Book Publishing Tax Credit.

For Kelly and Hannah,
and for my first reader, Lydia,
who looked in the pot each day after school.

My dad never saw what killed him—leastways, that’s what the cops said. Not that they ever said it to my face. I heard them talking when I was lying in the hospital bed. When they figured I was still knocked out. In fact it’s the first thing I can remember after the accident—those cops talking. One minute I’m in the backseat of the car, my forehead cool against the window, watching the broken yellow lines flash past. The next, there’s those two cops talking in the hallway, yanking me up outta somewhere gray and soft.

“Never seen what he hit,” says one.

“Never do,” says the other. “Not at night. Just come outta the woods and
bang
—you’re on top of ’em.”

“Come through the windshield—nearly tore him in half— then sailed right over the kid sleeping in the back.”

“Barely. Hasn’t said a word, hasn’t opened his eyes. Nothing.”

The one cop didn’t say anything to that, so I figured he musta just shook his head.

“Next of kin?” one asked the other.

“Don’t know. Dad can’t tell us, kid is still unconscious, nothing in the car.”

“Nope. No papers, no permit, no insurance.”

They laugh at that. Which is when I decide to say something. Or try to say something. Only nothing comes out except a moan—loud enough, though, for them cops to hear. I open my eyes but can’t see much—just shadows. But I can hear plenty.

The shadows move toward me, hands on my head and my wrist; then it all goes blank, till there’s a new voice calling out, “Son, son.”

It could be my dad, so I work hard to open my eyes. But it’s not my dad. It’s some doctor, all blurry white coat and gold glasses. He’s leaning over me with his face as big and white as the sun up in the summer sky when you lie on the grass looking up. Except you can’t look at the sun for a long time, ’cause it’ll burn the retinas right outta your head in about two seconds. I blink a few times, and slowly my head starts to clear. I can tell the little beep I hear is coming from a machine by my head, and I can smell the nurse’s shampoo when she bends close to me to read something on it. Then I can see the doctor’s got little bumps of black on his chin, like he hasn’t shaved in a couple of days. And I can tell what he’s saying.

“Son,” he says, “you’ve been in an accident. You’ve been unconscious for a couple of hours. Do you understand?”

I start to nod but stop real quick since it makes me feel like I got kicked in the back of my head.

“You’re going to be okay,” he says, “but the other person in the car, the driver…”

“Your dad. He’s been injured. Badly. Would you like to see him?”

I nod again, even though I know it’ll hurt.

“Okay,” says the doctor. He nods to a nurse and she goes off to the hall, coming back a sec later with a wheelchair.

“Before we go up,” the doctor says, “we’d like to call your mom. Can you tell me her name? Give me her phone number?”

The doctor looks at the cops, then back to me. “A sister or brother or a grandma?”

One of the cops starts to say something, but the other one gives him a jab. Then it’s just that monitor beeping and the nurse poking at some stuff till the doctor talks again.

One of the cops pulls a notepad outta his shirt pocket.

“Sykes?” says the cop. He’s looking at his buddy, then at me. “Sykes?” he says again, his eyebrows halfway up his forehead.

“All right,” the doctor says to them, angry, like he’s breaking up a fight at recess. He turns back to me.

“Michael,” I say, which gets the cop yapping again, louder this time.

“Enough,” says the doctor, turning round to look at the cops. “You’ll have to be quiet or I’ll ask you to leave.”

One cop—older, fatter—shakes his head. “Ask away, Doc, but we’re staying.”

The doctor gets ready to say something else, but the cop holds up a hand and waves it in his face.

“We,” he says, slow and quiet, still waving his fat fingers. “Are. Staying.”

The doctor lets out a sigh.

“All right,” he says. Then he and the nurse leave the room. A couple a minutes later they’re back, with the nurse bending close to help me into the chair. She’s soft and smells good, and it’s nice, that feeling, when she puts her arms around me to help me into the seat—nice and so warm that I get a bit cold and shivery when she lets go.

“Okay, Charlie,” she says, getting behind me to push the chair. “Let’s go see your dad.”

We head down a hallway to the elevator, the cops right behind us. The doors rattle open and I get pushed in first, a couple of old folks moving back to make room for me. The doctor comes aboard behind the nurse and turns to the cops as soon as he’s in. He holds up his hand and waves his fingers right in the fat cop’s face.

The cop puts his arm between the doors when they start to close—the doors are ugly green and chipped from where stuff has banged into them—but he yanks it out just before they shut, which I don’t blame him for doing, ’cause I’d a pulled my hand outta there too. We go up two floors and the cops are there waiting when the doors open, the fat one bent over, puffing.

“We’re coming with you,” his partner says, while the fat guy’s head bobs up and down, his red chins bouncing off his blue shirt. The doctor doesn’t say anything, just heads through a door marked icu, with me and the nurse and the cops all following along. I thought maybe my dad would be in a quiet room, a dark room, since he was hurt so bad, but this room is all lit up and full of noise and machines. We stop at the end of a bed that’s covered with electric cords and plastic tubes. It stinks in here, like that corner in the boys’ locker room where Randy Simms peed after Mr. Connors yelled at him for doing sit-ups wrong. I guess it must stink like that in here all the time, ’cause no one else wrinkles their nose or anything. Instead, the doctor bends down to talk to me. His knee makes a pop when he squats.

“Charlie,” he says, “you and your dad…your car hit a moose on the highway. It did a lot of damage, and your dad is in a coma. But he might be able to hear. So you could talk to him. Do you want to do that?”

But I’m not listening to the doctor; I’m more just looking at the guy in the bed, thinking there must be a mistake.

It’s true. It doesn’t. My dad has wavy black hair that curls on the sides and the sorta face that a tough guy on
TV
might have—where you can see his jaw muscles bulge out when he gets angry. The guy in this bed has got his head shaved, and his face is all soft and puffy. There’s a tube coming out his mouth. He looks like a sick Pillsbury Dough Boy, not like my dad. No way.

“This is your dad,” says the doctor. He’s looking between me and the nurse. Up to her, down to me.

He holds out his hand and I take it, which even right then I think is funny, ’cause I’ve only ever held my dad’s hand before, and it’s been a long time since I did that—not since I was little and I almost ran out into the street outside the clinic in Edmonton, before my dad grabbed my arm and yanked me back.

Now I see maybe it is my dad. He’s got that scar on his chin, and his nose has that bump where it got broke. I look for his watch—the one we said could come from me at Christmas—but it’s not there.

“We had to take it off,” says the doctor. “Because of the edema.”

“The swelling,” says the nurse. “That’s making him puffy. You’ll get it back…”

She doesn’t finish what she’s saying, but I guess what it is, and that’s the first time I feel myself getting soft inside, feel stuff coming up to my eyes and that soft sizzling in my nose. And right then the doctor and the nurse and the cops and the noise all kinda disappear and it’s just me and my dad, and it is my dad, I see now. There’s that scar, and the white hair poking straight up in his eyebrow, and a dent where his watch was. I can feel it when I put my hand on his.

“Dad,” I say, leaning down close to whisper to him, even though it hurts my head to bend over. “Dad, it’s me. Charlie.”

He doesn’t say anything. I knew he wouldn’t, but he might have. Maybe. But he doesn’t. Just lays there, still, warm. Then I feel his hand twitch and twitch again. I put both my hands around his. And then, just a tiny bit, it opens. Then a bit more, and I feel something drop out of it, small, hard, hot in my palm. A key. I can tell without even looking.

And as soon as I feel it, all the noise and voices and other people in the room come flooding back—the
beep
and
swish-schonk
of the machine by my dad’s bed. And especially the looks on the faces of those two cops, all pinched and pointy and looking right at me and my dad. Something about how they’re looking at me makes me keep my mouth shut, makes me clamp down on that key and decide, right then, not to say a word about it. I don’t know what it’s for or what it opens, but I know I’m going to keep it. I’m not going to give anybody a chance to take it away, like they took away his watch, and then have to depend on them to give it back. Back to me, a kid without a mom. Or a dad.