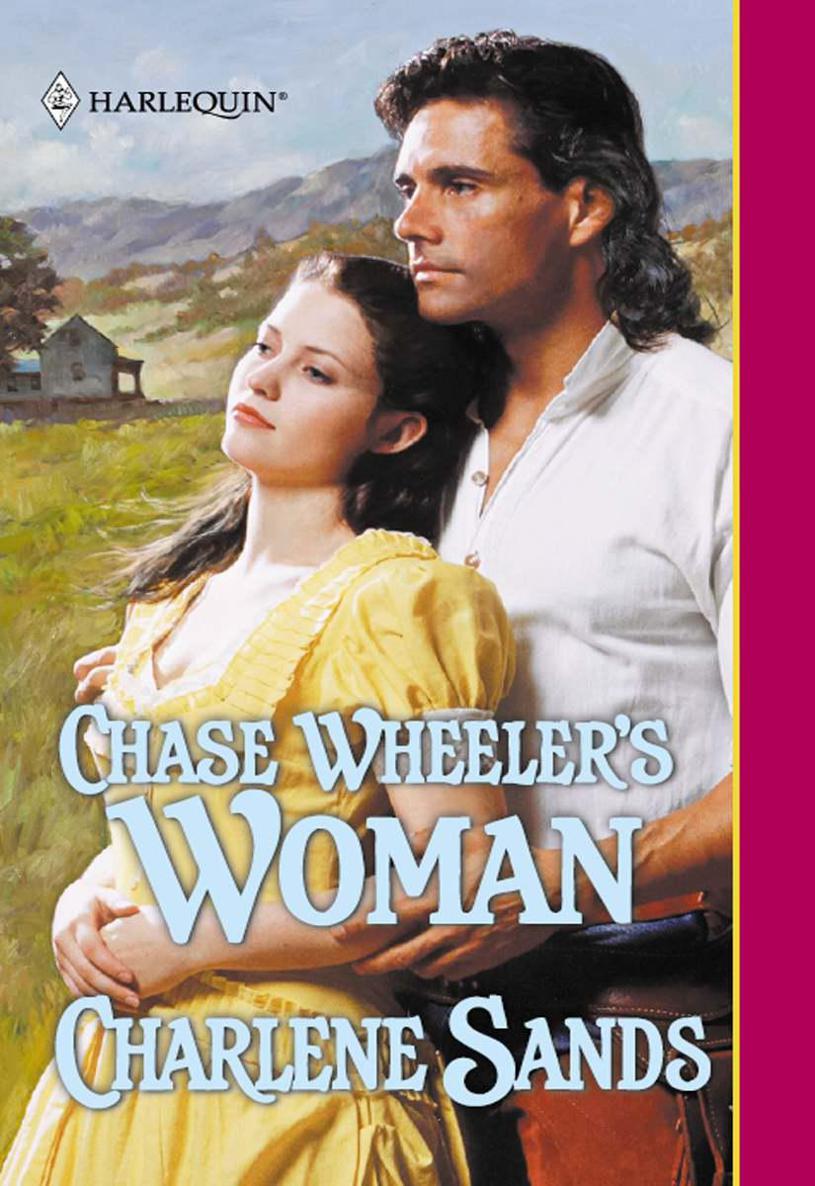 “I’m no stranger, Letty Sue,” the man with the gun stated.

Realization dawned quickly. Those eyes, she’d never forget them. They were the color of cold hard steel and had been stowed away in her mind.

“Remember me?” he asked, lowering his gun but directing his razor-sharp gaze toward her.

Speechless, she nodded. She barely remembered the boy with the Cheyenne name, Silver Wolf. But he was a man now, with strong features—dangerous eyes, aquiline nose, rigid jaw, tall in frame and she assumed a powerfully competitive opponent to any who crossed him. He was dressed in white man’s clothes, a plaid work shirt, chaps over his trousers and a black Stetson that seemed to cover up rather longish ink-black hair.

He drew in a deep breath, his eyes once again taking her in. A cold shiver ran down her spine.

Lily Gets Her Man

“Charlene Sands has written a terrific debut novel—this is an author on the road to success!”
—Romance Reviews Today (romrevtoday.com)

“A homespun tale of ordinary people coming to grips with deep emotions and finding a special love.”
—Rendezvous

To my talented son, Jason, my web master,
tech support and the greatest son a mother could have.

And to my sweet, beautiful daughter, Nikki,
the heart of my heart whose journalistic ability
is a source of great pride for me.

You have the world at your feet—
tread wisely and follow your dreams.
I am truly blessed to have you both in my life.

Special and sincere thanks to my editor, Patience Smith.
You are the very best.

L
etty Sue Withers stormed out of the house with picnic basket in hand, her straw bonnet falling off her head and cascading down her back. She yanked at the ribbons, freeing herself of the disturbance. “Please, Albert, let’s just go.”

Albert Milner took hold of her bonnet, then helped her up onto the buggy. “Are you all right, Letty Sue?”

Albert shot her a curious glance, then handed her bonnet back before boarding the buggy and picking up the reins. With a flick of the wrist he coaxed the horse to a fast trot.

Wriggling her backside to get comfortable in the seat next to him, she noted beads of perspiration break out on the young assistant banker’s forehead. He was
handsome in a book-learned way, she thought, eyeing his light blond hair and fine brocade suit.

This was the fourth time he’d come courting. Today he was taking her on a picnic. He was a pleasant companion—the precise tonic she needed to keep her mind off disagreeable subjects, like Mama leaving the ranch in the hands of a stranger.

“Care to tell me what’s got you so blustered?” he asked. The ranch house was just a dot on the horizon now. Albert slowed the horse to a steady walk.

“Oh Albert. Mama just informed me that she and her new husband, Jasper, are going on a honeymoon. To the East! Chicago, St. Louis, New York, all the places I long to see. Why, just about everybody this side of Louisiana knows how much I’ve dreamed of traveling East. It’s been a notion of mine since I was just a girl. Mama’s abandoning me to go off for a high time for three entire months, and that’s not the worst of it.”

Albert’s eyes gleamed. “You mean you’ll be alone at the ranch all that time? I could—”

“No, that’s just the point. I won’t be alone. Mama saw fit to hire on a new foreman. Seems Sam Fowler isn’t good enough to help me run the ranch, although he’s been with us the longest. Mama says he’s smitten with me and I’d just get his socks in a knot. But that just plain isn’t true. Why, Sam is the best friend I have on the ranch.”

Albert cleared his throat. “Joellen might have a point there, Letty Sue.”

“Oh, not you, too, Albert. Isn’t it bad enough Mama saw fit to hire a half-breed to run the ranch?”

“Why would she do that?” Puzzled, Albert lifted his light eyebrows.

“She
trusts
him. More than she trusts me. I told her I could handle the running of the ranch. Lordy, Albert, it’s been me and Mama for so long, how could she think of bringing a stranger on the ranch to oversee things? It’s not fair and I won’t have it.” Although she knew the man her mother had hired wasn’t really a stranger, Letty Sue wouldn’t abide that notion. For all purposes, he was a stranger—
to her.

“Seems to me your mama’s mind is set.”

“Well, I’m not letting anyone run roughshod over me at the ranch my father lost his very life trying to protect. They shot him right before Mama’s eyes, Albert. And you know what she did? She picked up her Winchester without so much as a skip of her heartbeat and chased those cattle rustlers right off our property.”

“Your mama’s as brave a woman as I’ve ever known, Letty Sue. Everyone in town respects her.”

“Yes, I know.” Letty Sue’s ire plummeted. She took a deep breath of air, sighing. “Mama’s wonderful and all, but sometimes it’s just plain hard being her daughter. It’s time I proved that I’m a capable woman, just like her. ”

“Why?” Albert asked, a curious expression on his face.

“Yes, why all of a sudden do you want to prove your worth?”

She shook her head slowly, contemplating her answer. It had dawned on her recently that she wanted the same respect her mama had attained. Joellen Withers had lost a husband. That in itself might have done in a weaker woman, but Joellen had brought the Double J to prosperity and raised a daughter at the same time. She had struggled through the years, made lifelong friends and survived in a business that was essentially managed by men.

“I’m approaching twenty-one years old and Mama still treats me like a child. She’s been so overprotective since…well, since the Indian attack. If only she’d give me a chance, Albert. That’s all I ask.”

Letty Sue glanced out at the land her father had worked from sunrise to sunset. Grazing cattle roamed over the rugged terrain, finding sources of food nature provided by way of rain and sunshine. Letty Sue had been just a little girl when her father died. Then had come the Indian attack. She didn’t blame her mother for her protective ways, but it was time for Letty Sue to set things to right. “I want to travel some, Albert. Once Mama returns with her new husband, I plan to strike out on my own. I want to see something of the world. It’s been a dream of mine…forever.”

“I can’t imagine Joellen letting you go off.”

“She will, I’m certain of it,” Letty Sue answered, nearly willing it so in her mind. “I just have to prove I can handle myself.” She put a hand to her abdomen. “All this unpleasant talk is just too unsettling.” With
a little groan, she added, “My stomach’s churning inside.”

Albert took her hand and brushed a kiss along her knuckles. “I sure am glad you trusted me enough to share your troubles, Letty Sue. It means a great deal.”

Letty Sue removed her hand from his. She was just letting loose some frustration, and Albert seemed willing to listen. She wasn’t at all sure how much she trusted him. “Can we speak of more agreeable subjects now? Please?”

Letty Sue cast him a sweet smile, hoping he was capable of making her forget any unpleasantness for a few hours. But her mama’s words kept pounding in her ears.

I trust Chase Wheeler with my life, and yours, too, Letty Sue.

Chase Wheeler, part Cheyenne Indian, a stranger. Letty Sue shivered, then shook her head, breaking free of thoughts so perplexing they clouded her mind. She wouldn’t think about it. She’d keep her mind set on having a pleasing picnic lunch with Albert and forget about her fate for the moment.

“Well, uh, sure is a nice day for a picnic. I’m glad you suggested it.”

She grabbed onto him to steady herself when the buggy hit a bump in the road. Her breast brushed against his coat sleeve. Albert’s face flushed with color.

“Yes, I am, too, but Mama says there’s a storm brewing. Why, the sky’s as blue as my new sapphire necklace, and the air is warm as anything. ’Course, Mama’s seldom wrong. She’s got good instincts predicting the weather.”

“I promised her I wouldn’t keep you out too long,” he said, then added, “You sure do look pretty today, Letty Sue.”

“Why, thank you, Albert. How very nice of you to say so. Do you like my new necklace?” She fingered the blue gem delicately. “Robbie Nichols gifted it to me on my birthday. Wasn’t that nice of him?”

Albert studied the necklace, a frown bringing down the corners of his mouth. “Uh, why yes, Letty Sue. Be sure to tell me when your birthday comes up again. I wouldn’t want to miss such a special occasion.”

“Oh, I certainly will, Albert.”

He drove the buggy a far distance, to a clearing near the creek that separated the Double J from Kincaide land. Helping her down, he braced his hands on her waist. Letty Sue lingered in his arms a bit, before swinging away to stroll by the creek, which was high from recent rains. Water rushed by, splashing against a large boulder before the creek took a turn south. A sparrow flitted in the trees, stirring the leaves, then settling on a branch to chirp in rhythm with Letty Sue’s wistful heartbeats.

After a minute, Albert called to her. “Letty Sue, are you hungry?”

She turned to find that he had laid a thick quilt on
the switchgrass under a mesquite tree. He’d emptied the basket Mama had packed onto one corner of the quilt. Foodstuffs were spread out, along with a jug of lemonade.

“Not particularly, Albert, but you go ahead if you’re hungry.”

Letty Sue hesitated, wondering if she should continue the touching game Albert had initiated on their very first date. Albert would kiss her, and each time he’d become just a little bit more bold. It had started out with his stroking her arms when they kissed. The next time he’d caressed her leg—through her dress, of course. The last time they’d been together, his fingers had worked their way to her ribs, urgently moving over the material of her dress, pressing her for more. She’d stopped him quickly, noting the hot look in his eyes. Today, she questioned if she liked him enough to allow more.

She came to stand by him. He took her hands and gently guided her down to the blanket. They sat facing each other, his light brown eyes twinkling.

“I don’t believe I’ve ever met a more beautiful woman, Letty Sue. You have the bluest eyes I’ve ever seen. Spring-sky blue, and your hair is like the finest silk. You’re smart and clever and…”

Rescue of the Bounty: Disaster and Survival in Superstorm Sandy by Michael J. Tougias, Douglas A. Campbell
A Mother's Secret by Janice Kay Johnson
Resistance by Allana Kephart, Melissa Simmons
The Castle of Llyr by Lloyd Alexander
Graven Image by Williams, Charlie
It Gets Better by Dan Savage
The Warrior King: Book Three of the Seer King Trilogy by Chris Bunch
Life in the Land by Rebecca Cohen
More Than Words: Stories of Hope by Diana Palmer, Kasey Michaels, Catherine Mann
Blood Storm: The Books of Blood and Iron by Steven Harper
Our partner