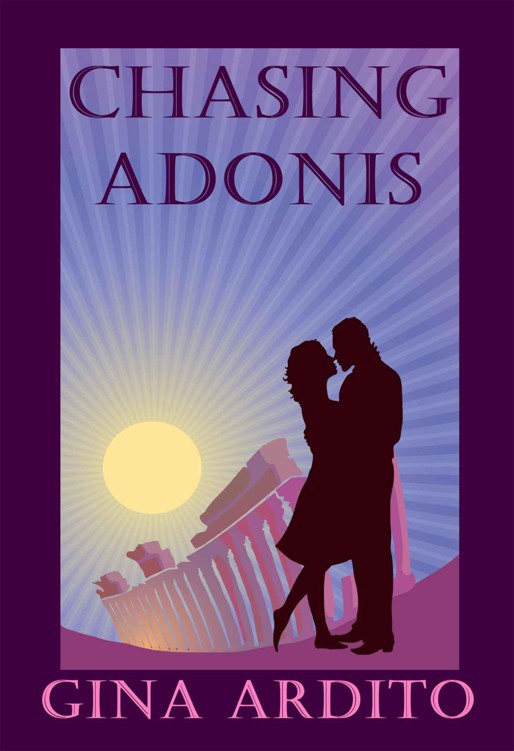 The following is a work of fiction.
Any resemblance to actual persons, living or dead, is purely coincidental.

Other Books by Gina Ardito

The Gift of the Magic (Mistletoe and
Magic Anthology)

Nobody’s Darling (Book I of the
Nobody Series)

Nobody’s Business (Book II of the
Nobody Series)

Nobody’s Perfect (Book III of the
Nobody Series)

A Little Slice of Heaven

A Run for the Money

Kismet’s Angel (Book I of the Kismet
Series)

For my son, Nick, whose love for the
Greek myths inspired this story. You are poised for great things in life. Grab
them all! I’m so grateful fate chose me to be your mom.

Persephone, goddess of the Underworld, fought to stifle her
delight at this luscious turn of events.

Lines of grief etched Aphrodite’s brow. The goddess of love
and beauty looked anything but the part. Swollen, red-rimmed eyes stared out
from sunken, pale cheeks. Her normally lustrous hair hung lank down her back.
Persephone’s sharp vision, well accustomed to her gloomy surroundings, even
noted a few tangles and snarls among those famous golden curls.

Yes, today was a very good day. A day she intended to savor
as long as possible.

“Well, Aphrodite?” She stood, arms akimbo, sandaled foot
tapping impatiently on the agate floor. “To what do I owe this unexpected
pleasure?”

Aphrodite fell to her knees, head bowed, and hands extended
toward her rival in supplication. “Please, have mercy. You know how I loved
Adonis. Return him to me, I beg of you.”

Her pitiful cries bounced off Persephone’s cold heart like
arrows against Apollo’s shield. “There is nothing I can do, daughter of Zeus.
Ares sent the boar to kill Adonis. I have no power to change the fates of
mortals. Even now Charon rows your lover’s body across the River Acheron to
us.”

Aphrodite’s keening wail filled the ghostly air as she tore
at her hair. “You have no heart, Persephone!”

Before Persephone might argue, a whispered voice filled her
senses. “Show my niece compassion, beautiful one.”

She turned to where her husband, Hades, sat upon his ebony
throne. At her questioning look, he nodded. In her mind, an idea blossomed. A
terribly clever idea. Biting back another smile, she returned her attention to
the overwrought goddess prostrate at her feet. “Rise, Aphrodite. Rise and hear
my words.”

The weeping deity quieted at once and stood, focusing
tear-rimmed eyes upon Hades’s queen.

“It is said love knows no boundaries—be they earth or heaven
made,” Persephone announced. “This, then, is my decree. Five thousand years
from today, I shall return Adonis to earth to begin life anew as a mortal. When
Adonis reaches the thirtieth year in this new life, you may appear to pursue
your lover’s heart—but as a mortal yourself. You must not reveal your past
kinship, nor shall you use magic to entice Adonis to your side. No gods may
assist you, and your son will shoot no arrows. If Adonis sees you through
love’s eyes and returns your affection, you shall be reunited for all eternity.
But if Adonis’s heart favors another in this second journey of life, you shall
relinquish all rights to your lover and never appear before me again. Do you
agree?”

Relief erased the lines and tears from Aphrodite’s face,
leaving her complexion dewy soft. “Thank you.”

“Do not thank me,” Persephone said with a sniff of disdain.
“Yet state before witnesses you understand the terms of my decision and agree
to them.”

Aphrodite clasped her hands to her breast. “I swear by the
River Styx, I understand the terms and shall abide by them.”

Satisfied, Persephone waved a hand. “Be gone, then.”

The moment her words touched the hopeless air, Aphrodite
disappeared. Only the mourning sighs of the dead remained to echo in the
chamber.

“You are devious, beautiful one,” Hades chastised.

“I am compassionate, Husband.”

“You did not tell Aphrodite the truth.”

She shrugged. “That only means I have a sense of humor.”

“And when will my niece learn the full details of Adonis’s
return to earth?”

Her laughter tinkled through the Underworld, an unusual
sound in such a somber setting. “I should imagine the moment Adonis is reborn a
female.”

Adara Berros stared at her reflection in the dance club’s
ladies room mirror. Did she look any different? She certainly didn’t feel any
different than she had fifteen minutes ago. When she was still twenty-nine.

The smoky shadow, mascara, and liner she’d drawn on earlier
this evening couldn’t hide the fear in her eyes. Thirty years old, and she’d
already seen too much of the world. Too much ugliness, too much death. Even the
three margaritas she’d downed at tonight’s birthday celebration hadn’t
brightened her bleak mood.  She studied her blotchy skin. Maybe she should
switch to vodka martinis. Tequila prematurely aged a woman.

On a rising crescendo of dance music, the restroom door
squealed open, and a gaggle of giggling young women stumbled inside.

“Did you see the hottie who just came in?” one of them
asked, gaze still pinned to the bar area behind the open door. She wore a
silver spangled halter top and jeans that looked painted on her size two frame.
“Omigod, he’s gawr-jus!”

“I know,” the first woman replied as she let the door swing
shut. “I can look, but can’t touch.”

They broke into cackling laughter, raucous as crows, then
lined up near the row of stalls. Adara took one last opportunity to straighten
the gold pendant that lay at the center of her neckline. The medallion, with
Apollo’s head engraved on one side, the Parthenon on the other, had been a
special gift from her mother decades ago. Today of all days, she missed her mom.
Even wearing this reminder didn’t ease her grief.

With a sigh, she left the restroom. The heavy
whumpa-whumpa-whumpa of the dance music reverberated through her bones until
the familiar tune engendered a what-the-hell reaction from her. The 70’s disco classic,
Heaven Must Be Missing An Angel
. Really? Who chose this moldy oldie? She
wended her way through the undulating throng toward the bar where her friends
perched on stools, their collection of purses holding her seat until she
returned.

Adara’s stomach pitched. God, no. She’d hoped the tequila
would numb her tonight. Instead, the caustic liquor had only nauseated her. As
she reached her circle of friends: loud and chunky Jayne, short and sassy
Renee, and fresh-faced Chloe, she shook her head. “Sorry, girls, but I’m out.”

A chorus of “Awwww…” erupted.

“You can’t leave yet,” Jayne whined. Through teeth clamped
in a dazzling smile, she added, “Take a look at what just walked in. Corner of
the bar. Behind me.”

“Be cool,” Renee admonished with a quick elbow jab to
Adara’s upper arm.

The moment her gaze locked on the stranger at the bar, she
understood the fuss. Despite the dimness of the bar area in contrast with the
multi-colored lights swirling on the dance floor, he seemed to glow golden. He
was dressed entirely in white, yet the lack of color only enhanced his
brilliance. His hair, a gleam of sunshine, framed a leonine face and cascaded
to his broad shoulders. At least a dozen women hovered around him like
beautiful butterflies entranced by a flame.

He must have sensed her staring because he looked in her
direction and smiled at her. Adara’s knees buckled. His smile practically
caressed her from the juncture at her neck all the way down to her toes.

Happy birthday, my darling.
His voice, a husky murmur
in her ear, sent delicious shivers across her flesh.

“You okay, Dara?” Jayne cocked her head and stared at her
through eyes glassy with the effects of too much tequila.

She waved off Jayne’s concern, as well as her vivid
imagination. Stupid. Now she was hearing men talk in her head. Drop dead sexy
men, she amended as she dared another look across the bar. When their gazes
locked a second time, he moved, with fluid grace, away from the crush of
desperate women preening for his attention. Hypnotized, Adara stood stone still
and watched his approach.

His use of her name, even if it was only in her head, broke
the spell. Panic set in. Her heartbeat sped up, and she couldn’t seem to catch
her breath. He
knew
her. How? Shuffling through the pile of purses on
her stool, she located the familiar pink pleather handle and yanked hers out.
“I don’t feel very good,” she blurted. “I’m gonna grab a cab and head home.”

Wait for me, my darling. We need to be alone.

The beautiful stranger was here for her. If his Vulcan
mind-meld game hadn’t told her, his intense focus as he strode toward her
clinched her suspicions.

“And that guy is coming over here,” Jayne said. “I think
he’s interested in one of us.”

“In me,” Adara whispered hoarsely. Her throat tightened,
fear becoming a noose around her neck. “He’s staring at me.”

“Lucky you,” Jayne replied with an exaggerated leer.

“No. I have to get out of here. Now.” Before anyone could
stop her, she turned and fled onto the dance floor.

“Stay away from me!” She clapped her hands over her ears to
drown out the voice in her head. The dance music pumping through the club’s
speakers thumped inside her skull. Jostled by the throng of dancers, she zipped
like a pinball, bouncing off a couple to the right, a cluster of girls on the
left, aimed for the rear of the dance club. Screw the cab. She was going to
have to make a run for it.

Pete, one of the bartenders, coming from the backroom,
stopped her cold. “Whoa, easy there, sweetheart. You can’t go out that way.”

“Please.” Wild with the terror pulsing in her veins, she
clasped her hands. “Someone’s after me.”

His attitude went from annoyed at another drunken chick to
protective guardian. “You sure?”

She craned her neck to see where he was, couldn’t find him
in the crowd.

Adara. Please. I mean you no harm.

She nodded at Pete. “He’s out there somewhere.”

“Okay, okay. Come with me.” One arm wrapped around her
waist, he pulled her close against him, shielding her with his brawn.

She nuzzled into the softness of his black t-shirt, her
fingers clutching the belt loop of his jeans. He smelled of liquor and sweat.

Pushing open the door behind him, he hustled her inside.
Once the door shut firmly behind them, she broke out of his hold. He flipped on
the light, which nearly scalded her with the sudden glare. He’d taken her into
the storage room. Cases of flavored vodkas, rum, and tequila lined the walls.
Cardboard boxes blared brand names of bottled beer: Budweiser, Amstel Light,
Samuel Adams.

“Who is this guy?” Pete asked urgently. “Do you want me to
call the cops?” He gestured to a black phone mounted on the wall.

Did she? And what would she tell them? That some gorgeous
guy was trying to pick her up in a bar, but she wasn’t interested? Hardly a 911
emergency. If they didn’t arrest her for wasting their time, they’d just shake
their heads and go back to their coffee and doughnuts.

“No,” she told Pete at last. “Can I…?” She swallowed hard,
tried to slow her pounding heart with a deep, shuddering inhale, exhale. “Can I
just hide out here for a while? Maybe he’ll think I slipped out the back?”

Unlucky in Love by Maggie McGinnis
One Second After by William R. Forstchen
Double Mortice by Bill Daly
Damocles by S. G. Redling
Gumshoe Gorilla by Hartman, Keith, Dunn, Eric
A Slip In Time by Kathleen Kirkwood
Bad Traveler by Lola Karns
Letters to a Sister by Constance Babington Smith
First Chance by A. L. Wood
Theirs to Hold (Hazard County Threesomes) by Michaels, Rory
Our partner