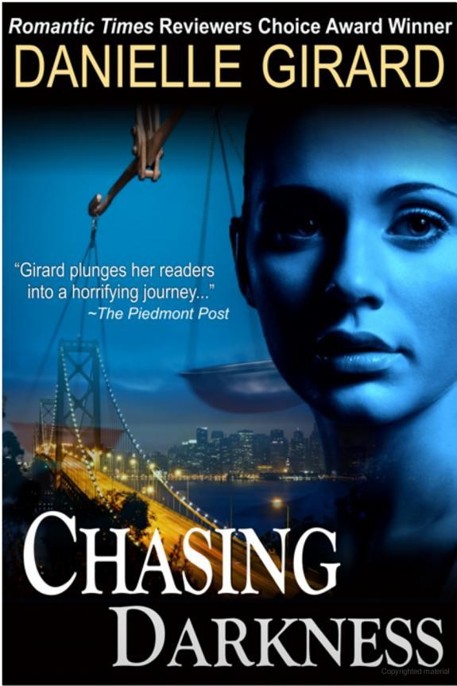 For
Mom and Dad,
who raised four smart, independent kids and taught us each to carve the path
best for us. You’ve done good. And yes, I have included myself with the “smart”
ones.

I want to first thank Department of Justice special agent
Karen Norwood for spending time to show me what she does. Everything she told
me was accurate and honest; if I got it wrong, it’s entirely my fault. I also
want to thank the talented authors who took time away from their own projects
to offer their honest criticism of mine: Joanne Barnes, Taylor Chase, Diana
Dempsey, Lisa Hughey, Malia Martin, Monica McLean, and Sonia Rossney. And thank
you for the extraordinary love and support: Chris, Claire, Nicole, Tom, Steve,
Blake, Bob, Donna, Sue, and Marcie. And to Helen Breitwieser and Genny Ostertag
for your insight on and passion for these books. You make them real.

Sam
Chase left the house at 6:50
A
.
M
. for her three-mile loop. The run was the single part
of her day that remained consistent, five days a week. Twenty-four minutes
later she would be home again. Twenty-four long, torturous minutes that she
would spend cursing the fact that she could never find a rhythm. She’d met
runners, people who loved to run and talked about the high they got from it
like it was a drug. Sam had never understood that. For her, it was all pain
from start to finish. She did it because she had to and that was it. Five days
a week, three miles each time. Then she could settle into bed at night with a
bowl of ice cream and a book and not feel guilty.

One
mile in, she passed John Muir Elementary School and waved hello to another
runner she often saw on her loop. He wore yellow nylon shorts, the kind with
the slits up the sides that, in his case, exposed sinewy legs. As he moved
forward, his legs created tall, staccato arches, the motion graceful and
smooth, unlike the shuffling, flat shape of her own strides.

Through
the row of sycamore trees that lined the schoolyard, Sam could make out a few
summer school kids just starting to sprinkle onto the playground. Their
brightly colored outfits contrasted with the dull gray pavement of the yard. On
the far side, a pack of them stood beside the fence. Their parents dropped them
off as early as seven o’clock and could pick them up as late as six whenever
school was in session. It was a great service for the parents, but it had to be
hard on the kids to be at school for so long. Still, they were shouting and
playing kickball and hanging upside down from the jungle gym with the energy
that only children could have at such an early hour—and without the help of
caffeine.

Sam
ran by, noting the slow progression of cars heading toward the freeways. She
thought about the upcoming day and her meetings. Anything to avoid thinking
about the ache in her side and the numbing pain in her thighs. She reached the
halfway mark and picked up the pace on her way back, eager to be home. As she
did every morning, she’d set the timer on the coffee machine before she left,
and she looked forward to the smell of freshly brewed Mocha Java as she walked
in the front door.

The
wind picked up, and she could smell eucalyptus and lemon verbena, their scents
intensifying as the temperature rose. June in Walnut Creek was hot, this June
hotter than usual. September and October, the months of Indian summer in
Northern California, would be scorching. Hot was fine by Sam. The heat cleared
her head. And the arid heat cleared memories of the damp, miserable South of
her youth.

Rounding
the corner by the school, Sam caught sight of an adult standing on the edge of
the playground where the kids were gathered. The prickle of adrenaline spiked
in her neck and shoulders. She took two steps forward and changed her course.
Something about the khaki coat and the hunched form of the shoulders was
suspicious. Silent alarms rang in her head as she pushed herself further,
faster. She heard a child’s high-pitched scream and shot forward.

She
could see the kids staring at the man with looks of horror. What had he done?

“You!”
she screamed when she was within thirty feet.

The
man spun around and Sam could see his pale nakedness beneath the coat. He
quickly shut his coat and ran. He was six-two, maybe six-three, Caucasian with
scraggly black curly hair that hung just over the collar of his coat. The
shadow on his face suggested he hadn’t shaved in a while, and she cursed
herself for not spotting him sooner.

He
wore clunky work boots and between the shoes and holding himself through his
coat, she was on him before he reached the other side of the street. She
grasped his shoulders and swung him around, tripping him and landing him on the
ground, face up. Before he could move, she rolled him onto his face, brought
his right hand behind his back, and jerked it up toward his head.

He
smelled like chocolate and cologne and she knew he’d had candy to offer the
kids. All the good perverts kept treats. “Don’t move, you sick bastard. What’s
your name?”

She
jerked his arm harder. “What’s your goddamn name?”

“You
been arrested before, Gerry?”

Trapping
his arm under her knee, she grabbed his hair and pulled his head back. “I’m a
fucking cop. Don’t lie to me. Have you been arrested before?”

Sam
let his hair go and smiled. “Then this time makes three.”

After
an hour of waiting for the proper authorities to show up and answering
questions and completing paperwork, Sam walked in her front door just as the
phone started to ring.

The
sound of that name, her old name, rose like thick tar in her throat. She hadn’t
used the name since she’d left the South. It had been almost twelve years. “Who
is this?” she asked, hearing terror behind the harshness in her own voice.

“My
name is Francis Mason. I’m with Child Protection Services in Jackson,
Mississippi.”

Sam
stared at the phone, trying to remember a case—any case—that had involved
someone in Mississippi. There hadn’t been one. She would have remembered. Just
the word “Mississippi” burned like flaming crosses in her mind. “What do you
want?”

The
woman cleared her throat. “I’m calling on behalf of Polly Ann Austin.”

The
constant buzz and whir of planes overhead, mixed with the booming loudspeaker
calling out passengers and flights, made it difficult for Sam to think. Behind
her she could hear a voice welcoming passengers to San Francisco International
Airport and directing them to baggage claim and ground transportation. Families
swarmed around her, reuniting in a dance as foreign to her as the apprehension
knotted in her gut. College students returning home for the summer, siblings
and cousins, aunts and uncles visiting. Even after all these years, the low
drawl of Southern accents in the crowd made her slightly nauseated.

Only
yesterday everything had been normal. Curled in the navy flannel sheets that
covered her bed year-round to fight off a constant chill, Sam had cut herself
off from reality with a book, the way she loved to do when she could find an
evening away from work. Last night she had been in the middle of Joyce Carol
Oates’
Black Water
, a modern re-creation of the Chappaquiddick incident
with a Kelly instead of Mary Jo. Sam read, feeling her grip on the book tense
as the senator pressed Kelly down, killing her to free himself. Sam knew what
that felt like. She’d felt Kelly’s fear. The only difference was, it hadn’t
killed her.

Her
focus back in the present, Sam found Gate 31 and waited as the people moved off
the plane. She stood off to one side, the squeals of families barely audible
over the pounding of her heart in her ears.

A
woman stepped out of the jetway and raised a rectangular placard with the words
“Samantha Chase” written in thick black ink. Sam forced herself into the throng
of people. She barely glanced at the woman, instead studying the eight-year-old
twin blond boys who stood on either side of her.

They
were so much like Polly Ann that Sam reeled back, but not before the woman had
caught her eye. The boys were tiny images of Sam’s sister and, she knew, of
herself. Sam saw Polly’s bright blue eyes and oval face, her blondish-brown
hair, wavy like the pattern the ocean left on the Southern shore.

The
woman pushed the boys in her direction. One was walking with crutches. The
woman had told her about that on the phone. The surgeons had put a pin in his
hip after the car accident. The conversation swept past her again, flitting
only long enough for her to feel her own confusion. She was inheriting her
nephews, she reminded herself. Polly was dead and Sam had been appointed
guardian. For some reason she couldn’t get the idea to stick.

“Are
you Samantha Jean?” the woman asked.

Sam
continued to stare at the boys, unable to speak.

“Ma’am?”
she repeated. “You are Samantha Jean Everett—I mean, Chase?”

“May
I see some I.D., please?” the woman asked, as though Sam were going to write a
bad check for the boys. Sam presented her driver’s license and the woman
presented the boys. A neat exchange.