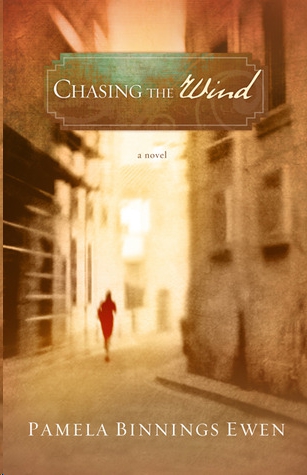 For Scott, Andrea, Lex, and Lucia,
my beloved children.

In memory of Anna Marie Catoir

Thanks to everyone at B&H Publishing Group for their friendship and hard work in bringing this book to readers—Kim, Matt, and the whole sales team, Diana, Jennifer—all of you, without you, Chasing the Wind would just be a manuscript sitting on my desk. Special thanks to Julie Gwinn. Thank you for your constant, loving support. During good times and hard times I have learned that your inner strength is awesome.

Thanks to David Webb, my editor. Your ideas enhanced the story—you make the editing process painless.

Thanks, again to Jacques and Wendy Michell for sharing your memories of life in Pilottown and on the river, and the colorful history of the Associated Branch Pilots. Jude thanks you too!

Thanks to my friend Barbara Ray for reading numerous drafts of this story and for your insightful comments. Thanks to my friend and former partner, Bill Stutts, for enduring endless wandering conversations and abstract
questions. And thanks to my friend David Skarke for being a sport and helping D. B. out at the end—even though it’s purely fiction, my friends.

And to my mother, my favorite critic who loves every word I write—thanks, Mom! To Scott, Andrea, and Lex and Lucia—Remember, one person can almost always make a difference. And, to my husband, Jimmy, I could never have written the story of Jude and Amalise’s love without you in my life.

Bingham Murdoch flew into town on
a star one day. At exactly 8:47 a.m. on Wednesday, October 19, 1977, he banked the silver Lockheed JetStar at such an angle that the rays of the sun glanced off the wing and shot a glint of silver through the city of New Orleans. Bingham sat in the first pilot's seat, peering through the wide, curved glass at the metropolis spread out below him. He took in the snaking, brown Mississippi River, the heavy old buildings holding each other up in the central business district, marked by Canal Street and, on the other side of Canal, the distinctive peaked roofs of the
Vieux Carré
, the French Quarter. Smiling, Bingham then swooped toward the broad expanse of Lake Pontchartrain and the small private airport there, smiling. He'd never felt such kindred spirit with a city before. This was a town with open pockets and an attitude.

Downtown a young lawyer with the firm of Mangen & Morris stood at the window of her office on the sixteenth floor of the First Merchant Bank Building for the first time in many months. Amalise Catoir felt good because, instead of the gray walls of hospital rooms and the winding vines of pink roses on the wallpaper in her old bedroom back home in Marianus, she was back at work and looking out over the teeming city again. Automobiles crawled through the narrow streets below, people milled on the sidewalks like ants, and a man in a suit on a bicycle ducked in and out of pedestrian traffic and cars. Almost as if nothing had changed.

Across the street her view of the city was blocked by another high building with rows of windows looking back at her. But to her left Amalise could look past the hospitals and domed stadium to where New Orleans stretched all the way to the lake. She couldn't see the water from this distance, but her imagination filled in the details, the breeze whipping the clouds like marzipan on this October day and ruffling the blue water below. There would be a few sailboats out to enjoy the weather, even on a weekday.

As she took in the view, a quicksilver glint in the sky drew her attention. For a moment she tracked the small plane as it descended toward Lakefront Airport, sunlight winking off a wing like a shooting star aimed straight for her. She wondered if she were the only person in the world who had just seen the momentary flash of light.

But someone else saw it, too. About a mile away, a small boy with delicate oriental features sat alone on the front porch of a sagging house in the Faubourg Marigny, watching the other children play. He was somehow different, he knew, from his foster brothers and sister. Yawning, he looked up at the clear blue sky. In the distance he saw a small plane shining in the sun. He watched it for an instant, shading his eyes with his hand and squinting. Then a bright flash of light came at him like a burst of gunfire, and he flinched, remembering.

When he looked up again, the plane was gone.

In her office Amalise shivered with the odd fancy that the flash somehow signified a fateful connection between the giver and recipient of the light.

Amalise turned from the window, leaned
back against it, and surveyed her office. It was good to be back. Her eyes caressed the leather-upholstered furnishings, the vintage mahogany desk and bookshelves, the
Black's Law Dictionary
given to her by the firm after her second year of law school, the rows of thick volumes bound in rich, colored leather—red, green, and black with gold lettering across the spines—records of corporate transactions she'd worked on during her first year with the firm, plus a few borrowed from other associates to occupy the spaces she would one day fill with more of her own.

Her eyes landed on a framed photograph on a shelf above the books, and a flood of emotions—anger, pity, fear, sorrow—hit her all at once. She walked over and picked up the photo of her and her former husband. Phillip Sharp's dark eyes glowered at her from under his brows, as if he had known even then how things would end. In the picture they sat at the Café Pontalba, across from Jackson Square, where she'd waited tables every day for three years during law school.

She closed her eyes, and the memories rushed in, swirling and mingling—Phillip's slow descent into madness, his hatred of her, his death, and then the accident and the blessed loss of memory in those last few moments. Twenty minutes, gone. Retrograde amnesia, the doctors said.

She'd been trapped in a nightmare with Phillip. Jude had warned her.

And Jude had saved her in the end.

Amalise moved along the bookcase, plucking each picture of Phillip from its place among those of Mama and Dad, Jude, Gina, and one of Rebecca and her in caps and gowns at graduation from law school. Tucking Phillip's pictures in the crook of her arm, she crossed to the long credenza behind her desk that held the telephone, her daily appointment book, some new yellow legal pads, a box of sharpened number-two pencils, and more photographs.

She picked up a box of business cards and pulled one out. Embossed in shining black letters across the center of the card, just above her contact information at the firm, was the name "Amalise Catoir."
Sans
Sharp. Good. Pushing the card back into the box, she set it down and trailed her fingers across a framed photograph of Mama and Dad at home in Marianus. And another one of Jude.

Jude, her oldest dearest friend. Since childhood, from the time she was six years old and he was ten, they'd been inseparable. She'd tagged along behind him everywhere. She smiled and picked up the photograph, studying it. He'd taught her to swim and fish, tutored her in math, taught her how to dance. Here, he stood on deck aboard a ship at the mouth of the river, poised to climb down to the pilot boat waiting below. His skin browned by the sun, he shaded his eyes with his hand as the camera caught him by surprise.

And then a question rose against her will: Was he really hers?

Rebecca came to mind. Beautiful, glamorous Rebecca. How casually she'd introduced Jude to Rebecca, never thinking. Amalise remembered the two of them as they were on that day, two years ago, when she married Phillip. Standing on the veranda, Rebecca had looked up at Jude, green eyes sparkling as he took her hand and led her to the dance floor.

They had been dating ever since. Yet Amalise had never given much thought to their relationship—until now. For one thing, Jude was too fine a man and too old a friend to discuss his love life. And Rebecca was focused on her career.
Driven
by her career, in fact.

Amalise's smile slowly faded. These new feelings for Jude were complicating things. During the past few months, while he'd spent so much time at her side as she recuperated, she'd grown conscious of a longing for something more than friendship with Jude, something deeper and different. She felt a connection with him that went way beyond their childhood companionship.

But how could anyone fall in love with her oldest, dearest friend? He was there in her every memory of youth. Could a person know someone so completely, their every little fault and wonderful thing, and then accept, or even understand, such a fundamental shift in their friendship and then just segue on to romance? Imagining the expression on Jude's face if she were ever to tell him of her feelings, she put the picture back on the credenza, setting it by the telephone where one of Phillip used to stand.

Jude probably still thought of her as that child.

And then there was Rebecca.

She set her mind to putting these thoughts aside. Jude was her best friend, but Rebecca was a good friend too. They had gone to law school together, becoming the first two women ever hired as attorneys by the prestigious firm of Mangen & Morris. They were the Silver Girls.