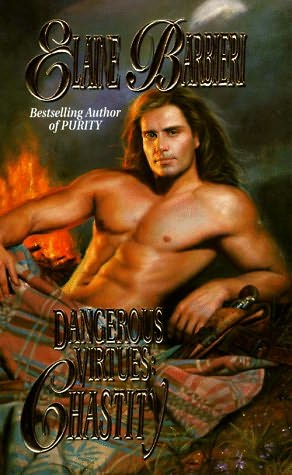 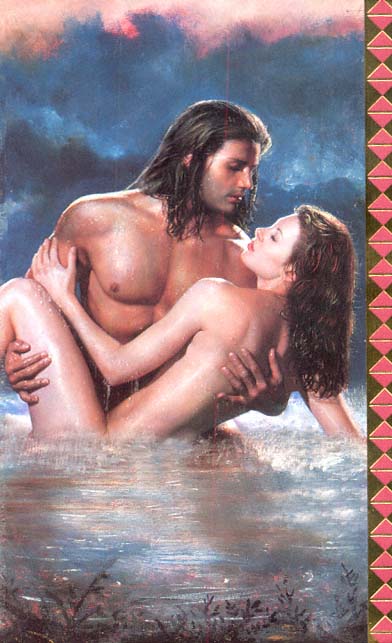 TOO CLOSE FOR COMFORT

"What in hell are you doing?" Reed asked.

"Who told you to shave me?"

His head was beginning to pound. "Get away from me."

Reed felt a warning prickle up his spine as Chastity stepped back, responding coolly, "Anything you say."

Touching his clean-shaven cheek again, Reed then touched the other to find it still fully bearded. "Give me that razor."

Reaching out with
a strength
he did not realize he possessed, Reed grasped the slender wrist so close to his face. Catching her off balance, he pulled her abruptly toward him, knocking off her glasses and sprawling her across him as he rasped, "I want that razor."

The female warmth of her was pressed against him, the curve of her surprisingly round breasts tight against his chest. Her disturbingly sweet breath brushed his lips…

They were the qualities she'd been raised to respect, but when Chastity Lawrence headed West to find her long-lost sisters of the same names, she discovered they could be...
Dangerous Virtues
How was a respectable woman to preserve her reputation when a charitable impulse stranded her with a wounded man and a doctor's strict instructions to remove the patient's trousers? Chastity had never seen a naked man before, but she was about to get an eyeful. The hard-muscled stranger had a body to die for, but it was the pain in his blue eyes that kept her from leaving Reed Farrell.
Posing as a man of God and his devoted wife, they traveled together into Indian
territory
-- he hunting a ruthless killer, she searching for Purity and Honesty. But paying lip sevice to propriety would not stop their heated kisses, and no virtue could save them from the exquisite pleasures of a union sanctified only by love.

"How could you allow this man to get into such a condition?"

The doctor was tall, thin, and irate. His small eyes glared accusingly at Chastity Lawrence from a narrow face that was lined and leathery. When Chastity and her semi-conscious burden arrived at his door a few minutes earlier, the doctor had examined her companion briefly and had then turned on her.

Chastity protested, "I did the best I could for him! He refused to leave the train until we reached Sedalia."

"He's a sick man. He's burning up with fever. He wasn't responsible for what he was saying. You should've realized that!"

"But, but." The doctor's glare darkened. "Excuses won't help this man's condition!"

The doctor turned angrily back toward his patient. Noting the wounded man's dark clothing and clerical collar, he said respectfully, "My name is Dr. Carr. What's your name, Reverend?"

"You're a sick man, Reed. It's your leg, isn't it?" Dr. Carr touched the parson's thigh. He frowned at the low groan the touch elicited. "I'm going to have a look at it."

When the parson did not reply, the doctor addressed Chastity gruffly. "You're going to have to help me. This man's in no condition to help himself, and he's too big for me to handle alone." Working at the parson's belt as he spoke, he loosened the buckle and began unbuttoning the closure beneath. Chastity caught her breath as the first patch of flesh was bared.

"What's wrong with you, woman?" Dr. Carr asked impatiently. "I'm going to lift him up, and when I do, I want you to pull his pants off."

Chastity looked at the doctor,
then
at the parson, who had lapsed back into semi consciousness. She hardly knew this man! But Dr. Carr was right. The parson couldn't help himself. She had no choice.

Swallowing, Chastity gripped the parson's loosened trousers. Her hands trembled as they brushed the taut, warm flesh of his hips, and her mind raced. If the maiden aunts who had raised her could see her now, they'd

Closing her eyes, Chastity jerked the trousers down. She opened her eyes
slowly,
intensely grateful to see that the doctor was not looking her way and that the parson was unconscious of the part she had played in undressing him. She allowed her gaze to drop slowly downward past his tightly muscled midsection and was relieved to see that although the doctor had stripped the trousers from the parson's legs, his more intimate private parts were shielded from view by the brief short clothes he wore underneath. But her relief was short-lived when she saw the bandage caked with blood that the doctor was removing from the parson's thigh. She gasped when he stripped it away to reveal a horrifying wound.

"Yes, you do well to gasp!" Dr. Carr continued his reprimand. "This wound is putrefying. The state that it's in, he'll be lucky if he doesn't lose his leg. How in the world did a parson get a bullet wound, anyhow?"

Chastity shook her head as Dr. Carr's question rebounded in her mind. Suddenly realizing that the doctor was waiting for her response,   she offered, ''I suppose you'll have to ask him."

Her response appeared to satisfy the irritable doctor no more than her previous offerings. "I'll take care of this," he said gruffly. "Go out in the kitchen and start some water boiling." He scowled. "You can do that, can't you?"

Chastity deliberately declined to reply. Were all Western men this rude?

"Then go into the cabinet in the back and take out some cloths. We're going to have to draw some of the infection from this wound with hot poultices. I hope you're ready for a long night."

Her only response was a wilting glance; then Chastity turned to do the doctor's bidding.

Heat… pain
… a burning in his thigh that would not relent…

Reed groaned aloud. Then he saw her face.

She was even more beautiful than he remembered, with brown hair shining gold in the sun and fair skin dusted with the freckles she despised. He remembered trailing his lips across the path of those freckles. He recalled that the path eventually led to her lips. And he remembered the taste of her lips… sweet and warm like honey.

But that vision of Jenny was fading. It was being replaced by another scene.

He fought the vision. He struggled to escape it. He called Jenny back as she had been before, smiling and glowing with life. He wanted to hold her again, to feel her close to him. He wanted to know that she was not gone from him forever.

He strained to open his eyes, to call her name. His heavy lids lifted and he saw her outline in the haze that enveloped him. He reached for her. He strained, battling the pain and the heat, knowing that if he could hold her again, all would be well at last.

But she held herself aloof from him.

"What the matter with you, woman?"
They had been working for hours over the fevered parson with little progress, and Dr. Carr's patience was fading. He snapped, "Can't you see what that man wants?"

Frowning with consternation, Chastity bit back her reply. Her respect for the gray-haired physician's skill had held her silent under his unwarranted attacks as they worked side by side, but the overwhelming desire to snap back at him was almost beyond her control. Surely he realized that the parson's dangerous condition was not her fault. She had done the best she could for a man who was little more than a stranger to her.

When she had met him on the train to Kansas City, she had seen that he was ill, and she'd tried to help him. She had delivered him to a doctor's door. She had remained   to assist the doctor when there was no other nurse available. They had been working over him for three hours, with the Reverend Reed Farrell twisting and turning, fighting them every step of the way, and she was as exhausted as Dr. Carr was.

Chastity looked at the reverend's tortured expression, and her throat choked tight. That was the crux of it, she knew. Their efforts had had little effect on his condition. Dr. Carr was as tensely aware of that as she. Was it too late to save him?

"I asked you a question, woman!"

"My name isn't 'woman'." Her voice was shaking with the anger she had suppressed for so long. "It's Chastity, and I would appreciate it if you would address me by that name."

"Chastity, is it?" Dr. Carr's tone did not change. "Well, my question remains the same. Look at that man. Are you blind? He's reaching for you. He's trying to speak. He's in pain, and he needs your comfort. Forget the damned poultices! I can handle them. What I can't do is calm whatever agitation is tormenting him. You can." He stared at her when she did not move, then ordered, "Take the man's hand, damn it!"

Stunned by the doctor's scathing tirade, Chastity turned back to the reverend to see the intense blue of his eyes upon her. His lips were moving in an incoherent appeal that raised a lump in her throat. Suddenly trembling, she reached out to take his hand, only to be startled when he pulled her toward him with unexpected strength. She felt the heat of his body as his arms folded hungrily around her, as his unsteady hand twisted in her hair. She heard the soft, tender words he mumbled against her ear.

There was pain in his words. There was a longing and desolation, the depths of which she had never heard before. There was a yearning so intense that it brought tears to her eyes as she lifted her head to
looked
down into the parson's bearded countenance.

His eyes were also moist with tears, and Chastity ached inside. He was suffering and he was in need, but his debility was not only physical. She wanted to assuage his need… but how? She touched his bearded cheek, and his lips twitched with a smile. He rasped an unintelligible word, tightening his hand in her hair as he drew her mouth down to his. She caught her breath as their lips touched briefly.

Blocking out his rasping whisper, Chastity allowed him to hold her against a heart that was pounding as rapidly as her own. She felt the love that welled within him and she closed her eyes, aware that his thrashing had ceased.

Chastity turned with surprise at the sympathetic tone of Dr. Carr's voice. He stood behind her in the Sedalia hotel room where the unconscious Reverend Reed Farrell had been carried a short time earlier. The glow of early morning filtered through the lone window overlooking   the town's main street, which had not yet come to life with the new day. The slivers of light cast gray shadows against the bed where the parson lay sleeping quietly after a long and exhausting night. Clearly revealed by the pale luminescence were deep lines of fatigue marking the doctor's face as he awaited her reply, but she saw something else, as
well.

Karlology by Karl Pilkington
Agatha Raisin and the Perfect Paragon by Beaton, M. C.
Now You See Me by Kris Fletcher
Let Me In by Callie Croix
Shield of Three Lions by Pamela Kaufman
The Starkahn of Rhada by Robert Cham Gilman
Banana Split by Josi S. Kilpack
LZR-1143 (Book 4): Desolation by James, Bryan
Glory by Lori Copeland
Rescued By An Alpha, Complete Set by Celine Yorke
Our partner