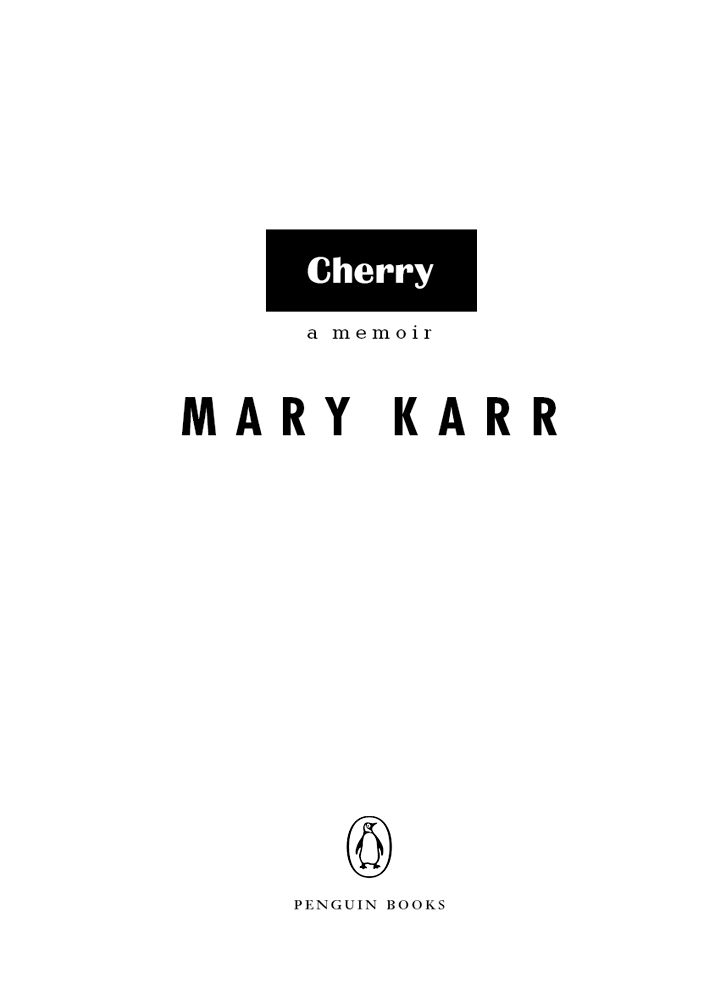 “A compelling ride through [Karr’s] adolescence.…What distinguishes Karr is the ability to serve up her experiences in a way that packs the wallop of immediacy with the salty tang of adult reflection…her descriptions of the bruised-lip, druggy wonder of teenage love are precise, unsentimental, and lovely.”

“
The Liars’ Club
left no doubt that Mary Karr could flat out write…the one question everyone had upon finishing her story was, could she do it again?
Cherry
lays that question to rest once and for all.…It never lacks for those trademark Karr details, but it’s about all of us.”

“A smart, searing memoir.…Romance, in all of its wondrous and heartbreaking incarnations, is Karr’s great subterranean subject, the ground upon which her wily, whip-smart writing catches root.”

Stunning.…If
The Liars’ Club
succeeded partly because of its riveting particularity,
Cherry
succeeds because of its universality. The first book is about one harrowing childhood, the second about every adolescence. She can turn even the most mundane events into gorgeous prose.”

“
Cherry
is the kind of book a brave parent could do a lot worse than to give to a teenager.…Teenage girls might come away from it knowing that they’re not freaks, that mistakes aren’t fatal, and that good writing kisses just about everything better. And for teenage boys, reading
Cherry
would be like stealing the other team’s playbook.…Mary Karr gives memoir back its good name.”

“Here, intact, is the smart, sassy, wickedly observant voice first met in
The Liars’ Club
, a voice that knows how to tell a story in a crackling vernacular that feels exactly true to its setting.”

“
Cherry
delivers. Karr still has her delicious knack for making you guffaw through horrible events…its humor, warmth, and crackling language should keep Karr’s fans hungering for another round.”

“Karr writes about adolescence with the same emotional precision that illuminated her account of childhood…[she] nails with wonderful specificity the complex way adolescents bond intellectually and emotionally. Her descriptions of her early sexual experiences are also original. Her language is frank without becoming clinical, and she captures the swooning tenderness of a kiss without sounding sentimental…firmly rooted though it is in a particular time and place,
Cherry
, like all serious autobiographies, is about something much more universal: the construction of a satisfying identity or, more precisely, the discovery of a fundamental self that was there all along.”

“It’s the powerful spiked punch of Karr’s writing that amazes.…
Cherry
is about the dizzy funk of female teen sexuality, and Karr captures the innocence and dirt of it, the hunger and the thrill, with exquisite pitch. Karr’s connection to her younger sexual self is profound with mercy or nostalgia.…Karr identifies the vulnerable, frightening gap between most girls’ night thoughts and those in the day.…Right now, in this remembrance of blooming, Karr continues to set the literary standard for making the personal universal.”

“This book is best when it portrays things common to all of us in adolescence. The woeful sense of isolation. The fierce desire to have friends. The agitated, wondrous discovery of things sexual. Those awkward kisses in the dark. And the risks.”

“This book is about being a female adolescent, a horrible fate; the best that can be said of it is that one does recover. The extraordinary thing about Karr, in addition to the poetry of her writing, is her stunning honesty.”

“Awesomely written.…
Cherry
is beautifully wrought and tart in its angst-wrangling.…Karr can render sentences so powerful as to make you bow your head in reverence.”

“
Cherry
is beautifully written, without a single word wasted. Karr’s poetic yet tensile language creates exceptional landscapes, both physical and emotional…her broad but precise descriptions, coupled with piercing insights into
the sometimes agonizing trials of growing up, create fully realized characters with whom the reader can immediately empathize.…Hardly a soul alive hasn’t felt exiled in the dark territory of adolescence; Karr maps this landscape expertly and candidly.”

“Step aside, J. D. Salinger, and take your alter ego Holden Caulfield with you. Mary Karr has staked out your turf, the upended land of adolescence. And she is just smart, angry, sensitive and self-mocking enough to defend it with everything she’s got…this time Karr has created another fiercely poetic and alternately bruising, comic, and picaresque account of her wild and painful journey through early adolescence. And if ever the tortuous metamorphosis from caterpillar to damaged butterfly has been captured in print, this is it…the tales of her first serious crush, first kiss and first date [are] each gorgeously delineated in all their tragicomic dimensions, and unique in the way they capture the overwhelming combination of attraction and repulsion involved in early sexual experiences. But everything Karr touches is emblazoned with this raw honesty and a sense of the breathtaking confusion and emotional terrorism of adolescence.”

“
Cherry
, Karr’s riveting, high-octane sequel to
The Liars’ Club
, disproves F. Scott Fitzgerald’s oft-quoted piece of wisdom about there being no second acts in American lives…it is the kind of book that leaves you exhausted with pleasure—for the jigsaw music of its language, its unyielding candor, and the vignettes of adolescence that barrel down on you with all the force of a life reimagined with heartbreaking humor and sadness.…It’s about time that teenage girls have their stories told. Karr’s account of her teenage years is a universal chronicle of the boredom and skin-tingling excitement that is the essence of growing up—anywhere.…Karr remembers with such vividness that the story strikes the reader with the force of literature, the power of experience felt at that instant.…She is each of us as an adolescent—yearning, romantic, racing against our own heartbeats.”

“Karr’s eloquent tome on her tumultuous teen years is not just another memoir…her masterful concatenations of language are downright addictive.…She has taken the courageous step of stepping back fully into that sometimes unlovely adolescent self, a place where pride, self-loathing, euphoria, idealism and rage stutter and roil so violently that emotions are hard to pin down from one moment to the next. Karr articulates this roller coaster of sensation and experience with razor-sharp authenticity.…
Cherry
offers a genuine and eloquent portrait of what adolescence could be like for women of the baby boomer generation.”

“
Cherry
is a bittersweet look at first kisses, first loves and first times, those mutable moments that somehow become trapped like insects in amber…it is also a layered examination of the many ways in which we grow from children to adults, assembling ourselves as unique individuals, separate from our families and our villages.…As much as
Cherry
is a coming-of-age story, it is also the explanation of how a woman can emerge from her tangled history.”

“This sequel to
The Liars’ Club
takes us where few female memoirists dare to tread—adolescence. Karr’s small East Texas hometown may be surly, but her depiction of how she got out of it is warm, unsparing, and filled with humor…she manages to evoke both the peculiarities of the ’70s and the universal humiliation connected with coming-of-age.”

“By some alchemy of words we get within the teenager standing in the tremulous green light of a bathroom, watching her friend twist the razor’s stem so the safety hinges open ‘like a magic doorway.’ Again and again, Karr goes inside the dangers, the devastations of coming of age.…
Cherry
is a tour of the mind, conducted with the pitiless deliberation of art.”

“Mary Karr’s scorching memoir of the ’70s picks up where
The Liars’ Club
left off…her lickety-split sentences combine what she calls her daddy’s gift of voice with her own poet’s sensibility to make
Cherry
an amazing experiment in language as well as story.”

“Fans of Karr’s award-winning
The Liars’ Club
will not be disappointed by this feisty, funny, and tender memoir of a drug-ridden coming of age.…Karr vividly captures those moments that are so important to a girl growing up, and explains why they are important.”

“Moving effortlessly from breathtaking to heart stabbing to laugh out loud raucous, the precision and sheer beauty of Karr’s writing remains outstanding.”

First published in the United States of America by Viking Penguin,
a member of Penguin Putnam Inc., 2000

A portion of this work first appeared in
The New Yorker.

Grateful acknowledgment is made for permission to reprint excerpts from the following copyrighted works:

Selection from
The Kabir Book: Forty-Four of the Ecstatic Poems of Kabir,
Versions by Robert Bly. Copyright © 1971, 1977 by Robert Bly. By permission of Beacon Press.

THE LIBRARY OF CONGRESS HAS CATALOGED THE HARDCOVER EDITION AS FOLLOWS:

Except in the United States of America, this book is sold subject to the
condition that it shall not, by way of trade or otherwise, be lent, re-sold, hired out,
or otherwise circulated without the publisher’s prior consent in any form of binding
or cover other than that in which it is published and without a similar condition
including this condition being imposed on the subsequent purchaser.

All or Nothing by Natalie Ann
Expecting Royal Twins! by Melissa McClone
The Rose at Twilight by Amanda Scott
The Last Punisher: A SEAL Team THREE Sniper's True Account of the Battle of Ramadi by Lacz, Kevin, Rocke, Ethan E., Lacz, Lindsey
Child from Home by John Wright
Eclipse of the Soul: The Interdimensional Saga, Book 2 by J.L. Hendricks
Class Act by Debbie Thomas
The Bedroom Barter by Sara Craven
Vimy by Pierre Berton
The Catcher in the Eye (America's Next Top Assistant Mystery Book 1) by Lotta Smith
Our partner