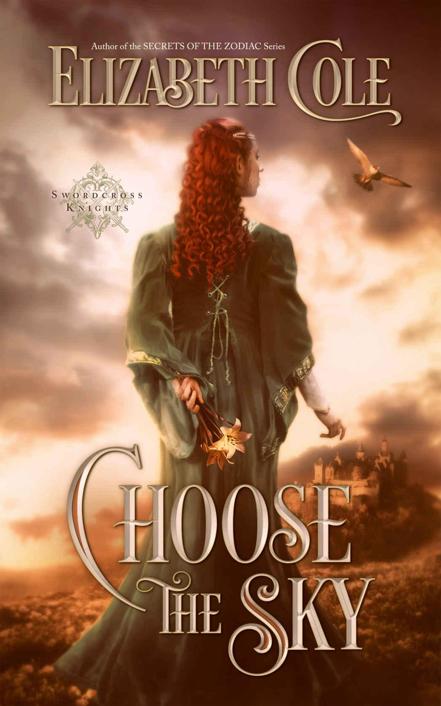 Lady Domina is playing a daring game. After her father falls gravely ill, she hides the truth of his condition and continues to rule in his name. Then one of the king’s knights arrives on royal business, and she must find a way to deceive the arrogant, handsome intruder.

Sir Luc of Braecon is fiercely loyal to the king. His battle scars prove it. When he is ordered to investigate reports of an insurrection, he swears to find the traitor. The first clues lead him directly to the Lady Domina. As the relentless knight exposes one secret after another, he finds that nothing about the tantalizing lady is what it seems.

Soon Domina and Luc are locked in a dance of deception, lust, and betrayal, each turn bringing them closer to a finale where winner takes all. Considering the stakes, the real danger is falling in love…

Get your
free books
:
elizabethcole.co/newsletter

The grey day darkened to
a dull twilight, with only a red stain in the west to show where the sun was hiding. The lady Domina de Warewic pulled her cloak tighter, trying to bury her chin in the soft white fur of the collar. Then a gust pushed one red curl of hair across her face, and she braved the cold to tuck the lock back into her braid with bare fingers.

Despite the wet, biting wind, she kept watching the sky. From her vantage point at the top of the tallest tower of Trumwell Castle, she could see for miles in every direction. The view was not inspiring at the moment, considering the grim weather and the lack of any color in the late autumn landscape. Trees, now stripped of their leaves, stood silent and resolute, a forest waiting for winter.

The waters of the river to the west barely glimmered now, reflecting only a steel grey sky.  Aside from the wind that tangled the smallest branches, nothing moved.

Domina exhaled a puff of steamy breath when something caught her eye down below. A single rider approached the castle, the horse’s hooves pounding the track on the road from the  east.

A messenger from one of the neighboring manors, she guessed, or perhaps one of the larger towns in Shropshire where the de Warewic family did a little business. She didn’t leave her post yet. Any message would be brought to her, for she was the lady of the castle now. Indeed, within a quarter of an hour, one of the castle’s footmen found her.

“My lady,” said the footman, with a bow. “This just came for Lord Godfrey.”

She took the slender, cylindrical case he offered. With surprise, she saw the sigil of King Stephen on the outside. Uneasiness filled her, but she kept a calm face. “See that the messenger is fed well and shown quarters for the night. Let the king’s servant report that our hospitality was not lacking.”

Domina expected no less, of course, but it never hurt to remind people of their duties. Her estate was far from the civilized centers of the world, but that was no reason to forgo chivalry.

“My lady,” the servant said hesitantly, “I believe the messenger expects to bring an answer back.”

“He’s not going anywhere tonight,” Domina replied. “He can wait. Tell him I will bring  this letter to my father personally. You may say exactly that, and no more.”

“I understand, my lady.” The footman bowed again, and then dashed off.

She was left alone, staring at the sealed container holding news from the king himself. It felt uncommonly heavy in her hands. There were penalties for betraying the king’s confidence, and breaking a sealed letter addressed to anyone but her was surely a violation. The letter was intended only for her father, Godfrey de Warewic.

“If I read it aloud to him, it will be just as if he read the paper himself,” she said to reassure herself. She was performing a filial duty—assisting her father in every way she could, just as she’d done for years.

She descended the steps of the tower, eventually emerging into the castle courtyard. Unlike many such spaces, this one was partially paved in stone—broad, flat rocks hewn from the hills nearby, along the border between England and Wales. The pavers were an extravagance from the castle’s first construction, but one she appreciated every day, for it kept the ground from turning to mud in the wet months, or stirring up dust clouds in the dry summer.

Her leather-shod feet moved silently over the stone, but even so, she felt as if she was being watched. She knew that it was only because a stranger was within the walls. The message was harmless, but over the past few years, she’d grown reclusive. As soon as this messenger left the next day, she’d feel better.

Domina turned sharply, walking to a doorway of a two-story building in the far corner of the grounds. Most people would expect the lord of the castle to be within the keep itself, but she went to the more modest structure built of heavy, dark wooden beams, and covered in white plaster. The ground floor was given over to storage of wine and spirits. Above that, however, was a residence. Domina climbed the steps slowly. At the top, a servant was waiting.

“My lady,” the maid said, with a curtsey. She was around fifty years of age and carried herself with the confidence of long practice and familiarity. No one had to be told that this woman served in Trumwell Castle her whole life. “He’s awake.”

“Good. Leave us, Beatrice. I wish to spend some time alone with him.”

The maid nodded and allowed Domina to pass, then drew the door shut.

Domina peered into a room lit only by the fireplace and a few candles. The scent of beeswax sweetened the air, but no candle could brighten the mood.

A man lay in the center of a large four poster bed. Curtains covered three sides, but the left hand side, which faced the fire, remained drawn aside, exposing the space within.

The man’s eyes were open, and he turned at the sound of her feet.

He smiled at her, but there was no recognition in his deep brown eyes, the same eyes she’d inherited. Domina’s heart sank. So often, this was the expression he greeted her with. Her own father forgot who she was.

“Almost. Has Beatrice given you supper yet?” She saw a tray by the window, with the dishes empty. “Ah, yes. Beef stew, I think. Did you enjoy it?”

He nodded, but said, “Was there no partridge? I like partridge.”

“Yes!” She was unreasonably happy he remembered this detail. “You do like partridge, Father. I’ll ask the cooks to prepare you some, once we have more in the kitchens.”

“The ones you hunt, Mina,” he added. “I like those best, for they’re the freshest.”

“Of course,” she said, beaming at him. Ah, he remembered something! He remembered how she always went hunting with her falcons. It was one of her favorite pastimes.

“Have you come to sing to me?” he asked then.

“If you like, Father. But first, I must read you a letter that’s come from the king.”

“Whatever our king asks, we give,” her father said, his voice suddenly much more forceful, as it had been before his collapse.

She broke the heavy wax seal and scanned the words. It was written in French, of course, the language of the court. Domina read French, a little Latin, and even the rough English used by many in the countryside. She’d been well-educated for a lady. She frowned as she finished the brief missive.

“What is it?” her father asked.

“The king sends his greetings, and prays for your good health,” Domina said, which was true enough, since that was how the letter began. The words were formulaic, written down by some scribe who wrote a dozen letters like this in a day. The second half of the letter was what made her worried, but she would never distress her already burdened father with news he could do nothing about—if he even understood what she told him.

“King Henry passed away,” her father said, in an irritated, querulous tone.

“Yes,” Mina agreed. “This comes from his successor, King Stephen. You met him at his coronation.”

“When you swore fealty,” she reminded him. “Remember? You said Trumwell Castle would always be held in his name.”

Her father closed his eyes and settled back against the pillow. “I don’t remember. Sing to me.”

“Just one song.” Her mind was racing, and she had little time to linger, much as she would like to.

The Marriage at the Rue Morgue (A Rue and Lakeland Mystery) by Jessie Bishop Powell
Do it like Magic Mike (Regular Sex Issue 3) by Kitty French
Old World Murder (2010) by Ernst, Kathleen
Immurement: The Undergrounders Series Book One (A Young Adult Science Fiction Dystopian Novel) by Hinkens, Norma
Desiring the Forbidden by Megan Michaels
Starting with the Unexpected by Andi Van
Murder at the 42nd Street Library: A Mystery (Thomas Dunne Book) by Con Lehane
Fudoki by Johnson, Kij
Under Cover of Darkness by Julie E. Czerneda
Junie B. Jones Is Captain Field Day by Barbara Park
Our partner