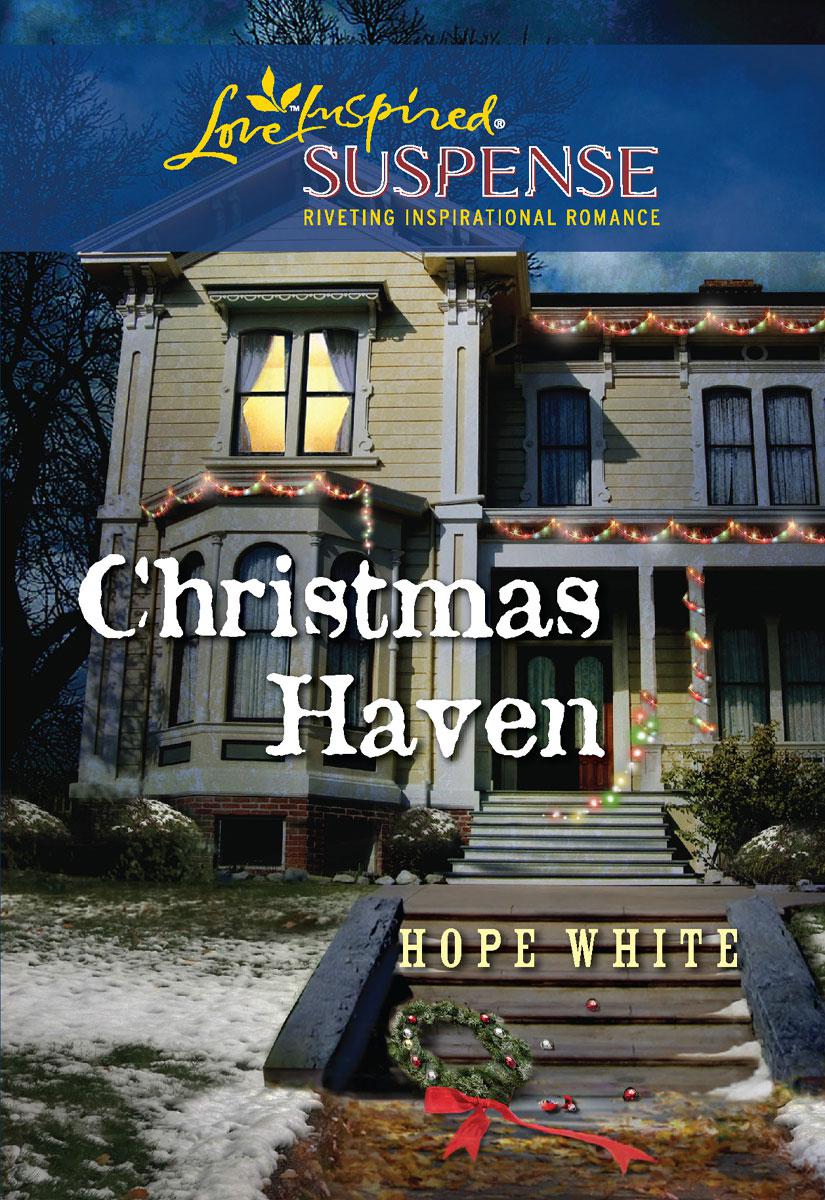 His instincts piqued when the female whipped around the corner and raced for the opposite end of the ferry. They went on red alert when he spotted a strange man make that same turn and start searching between cars.

“Ma’am?” he asked again. She didn’t answer at first. He’d seen her go down, flat on her stomach.

She sat up and the air ripped from his chest. No, it couldn’t be. He’d never forget the face of his first love. Julie Burns, the girl who’d taken a piece of his heart with her when she’d left ten years ago.

Witness on the Run

An eternal optimist, Hope was born and raised in the Midwest. She began spinning tales of intrigue and adventure when she was in grade school, and wrote her first book when she was eleven—a thriller that ended with a mysterious phone call the reader never heard!

She and her college sweetheart have been married for thirty years and are blessed with two wonderful sons, two feisty cats and a bossy border collie.

When not dreaming up inspirational tales, Hope enjoys hiking, sipping tea with friends and going to the movies. She loves to hear from readers, who can contact her at [email protected]

To Drex—Dream a little dream, my friend.

J
ulie Burns had planned to visit her family for Christmas, but not like this, not running from danger.

She dug her fingernails into the strap of her backpack and quickened her step. Heart pounding in her chest, she crossed Sunset, eyeing the ferry terminal ahead.

She was close, a block away from hopping the ferry and escaping the threat.

“Don’t be paranoid,” she told herself as she shot a quick glance over her shoulder.

The last thing she wanted was to draw attention by acting nervous. She’d tucked her blond hair into a knit hat, put on her glasses, which she rarely wore, and hopped the bus to the Edmonds ferry terminal from downtown. She did everything she could to look average, nondescript. Invisible.

The police hadn’t been able to help her. Not when she’d reported Andy missing, or when she reported the kidnapping of Dane Simms, another teenage street kid that she worked with at Teen Life. When Julie’s office had been broken into, the cops had investigated, but chalked it up to a random burglary. She sensed there was more to it.

Then she started getting anonymous calls and felt as if someone was watching her, waiting for an opportunity to…

Out of the corner of her eye, she spotted a dark sedan cruis
ing slowly past. She focused on the doors to the ferry terminal, closing in, nearly there.

“Excuse me?” a man called out from the car.

She ignored him at first, hoping he was speaking to someone else.

“Miss? Is this the ferry to Kingston?”

She turned to the driver, a clean-cut-looking man in his thirties. “Yes, it is.”

“Great. Do you know where they line up? It’s my first time on a ferry.”

“I think back on the main street, there.” She pointed.

“Thanks very much.” He smiled and pulled away to get in line.

With a slight shake of her head, she refocused on buying her ticket.
Relax, don’t be so paranoid.
She’d taken precautions to make sure no one had followed her and had removed all her personal information from files at work, which wasn’t easy with Helen spying over her shoulder. The woman was always looking for an opportunity to point out Julie’s shortcomings to their boss. She’d probably lead the rally to fire Julie when she didn’t show up for work tomorrow.

Julie couldn’t worry about office drama. She’d packed a bag this morning so she wouldn’t have to go back to her apartment after her dinner meeting, and instead came straight to the ferry terminal.

To escape, back to her hometown of Port Whisper. Morgan’s smile flashed across her thoughts and regret sliced through her chest. It surprised her. She didn’t think it would still hurt. Not after all this time.

But Morgan Wright had been her first true love.

Her only true love.

Now, with her work schedule counseling homeless teens, she had little time for romance, but didn’t miss it. She wondered if that was because she’d had her chance at love with Morgan and blew it.

“Don’t think about it,” she hushed.

It only added to her anxiety. To calm herself, she pictured her hometown, the safe, predictable, boring world in which she grew up.

And had left ten years ago. She’d had to leave. She’d needed to do more by helping underprivileged teens in Seattle.

It had seemed like a good plan, until last week, when it all fell apart.

She bought her ticket and headed up the ramp to board the ferry.

Heading home. Something she said she’d never do. Not because it was a bad place, but she couldn’t bring herself to go back and be that person again, a small-town girl living in a city where the biggest crisis was the Langford brothers breaking into Stuckey’s Hardware to steal supplies to make pipe bombs.

The teens she counseled dealt with homelessness and drug use, abusive parents and a bleak future. She wanted to help the people who really needed her.

She shifted into a booth by the window and pulled out her phone, feeling bad for having to abandon her team. They’d had no idea about her plans to leave when she’d smiled across the dinner table at them tonight. But there were no other options. She sensed the danger trailing her and had to get away. She figured the less they knew about her plans the safer they’d be.

Thinking of how she’d craft
that
email to her boss, Andrea, she noticed a text message alert. She clicked on it and the message opened:

She gasped and whipped her head around, eyeing the passengers in the immediate area: a group of kids with a parent; a hippie-looking guy curled up and asleep on the bench; a mom with two kids, one in a stroller.

Should she get off the ferry and wait for the next one? Notify ferry personnel?

And say what? That she feared she was being stalked but couldn’t be sure?

Walking toward her was the man who’d asked for directions to the ferry line. He eyed his phone, stopped dead in his tracks and looked right at her. He smiled. Goose bumps pricked down her arms.

She got up and headed for the snack bar, bustling with passengers anxious to fill their stomachs.
Look relaxed, casual.

You don’t know he was the one who sent the text.

She wandered up to a pack of teenagers who eyed foil-wrapped burgers. The thought of food made her stomach twist into a tighter knot. The hair bristled on the back of her neck, instinct warning her to get away.

She grabbed a sandwich and lined up to check out. Glancing over her shoulder, she spotted the car guy in line a few people behind her.

Julie fumbled in her pocket for cash. Her fingers trembled as she desperately strategized her next move. She handed the cashier a ten and took off, rushing toward the stairs, hoping to hide between the cars below.

Would he jump the line and follow her? She couldn’t think about that, she had to get away, had to—

She raced down the stairs and flung open the door. Rushing up the aisle, she used the cars as cover, ducking between them so as not to be seen. She crisscrossed the ferry and glanced over her shoulder. A tall figure headed toward her.

She stumbled on something and went down, dropping her sandwich and slamming her palms to the ground to brace her fall. But it was too late. She was down and he was close. She could feel his eyes boring into her back.

And saw a shadow loom above her.

His instincts piqued when she dodged around the corner and raced for the opposite end of the ferry as if she was a sprinter in the Olympics. They went on red alert when he spotted a tall male make the same turn and search between cars.

“Ma’am?” he tried again. She didn’t answer at first. He’d seen her hit the ground and figured she was out of breath.

She sat up and the air ripped from his chest. No, it couldn’t be. He’d never forget the face of his first love, never forget her golden eyes or freckles that dotted her nose.

He’d never forgotten Julie Burns, the girl who’d taken a piece of his heart with her when she’d left ten years ago.

Lower lip trembling, she clutched her wrist to her stomach, rocking forward slightly. She still hadn’t looked at him.

A tornado of emotions whipped through his body, from anger to pain to concern. And he had so many questions.

“Take a deep breath,” Morgan said, touching her shoulder for support. That’s what he’d do if she were a stranger. He decided that was the best way to keep his perspective.

To treat her as if she were a stranger.

He spotted movement out of the corner of his eye. A tall man, thirties, with slicked-back hair, wearing an overcoat, froze ten feet away. Was it the man who’d been searching between cars? Morgan couldn’t be sure.

“Can I help you?” Morgan stood to his full six feet two inches.

“She forgot her change upstairs.” He hesitated and extended his hand to reveal a few bills and coins.

Morgan reached for it.

“Who are you?” The guy closed his fist.

The guy dropped the money into Morgan’s hand and eyed Julie. “Is she okay?”

“She tripped. She’ll be fine.” Morgan glanced at Julie, who still hadn’t looked up, then back at the stranger. “You a friend of hers?”

The guy backed off. “No, I just happened to be in line behind her.”

“Good Samaritan type,” Morgan said. “Thought we’d lost all of those. Thanks again,” he said in dismissal.

With a nod the guy disappeared into the stairwell.

Morgan took a deep breath and kneeled beside Julie. She was white as a sheet, dazed and looked as if she was going into shock.

Barbarian by Scarrow, Simon
What's Left of Me (Finally Unbroken Book 2) by Maria Macdonald
The Train by Diane Hoh
The Deal by Elizabeth, Z.
The Dream Where the Losers Go by Beth Goobie
Uncovered by Truth by Rachael Duncan
Times of Trouble by Victoria Rollison
The Dancing Bear by Michael Morpurgo
The Gospel of the Flying Spaghetti Monster by Bobby Henderson
In Cold Blood by Truman Capote
Our partner