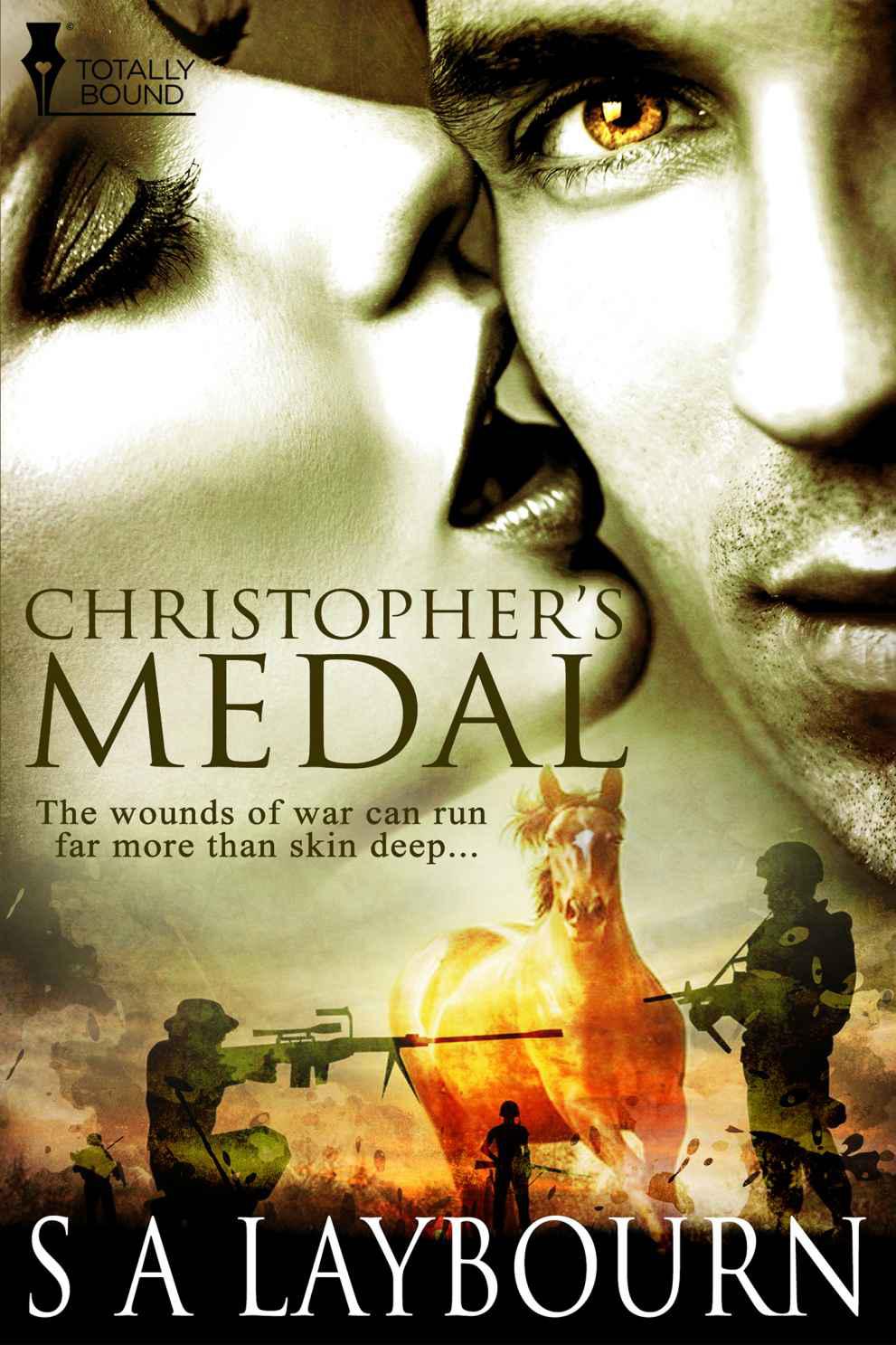 This book contains sexually explicit content which is only suitable for mature readers. This story has a
heat rating
of
Totally Burning
and a
Sexometer
of
1.

This story contains 256 pages, additionally there is also a
free excerpt
at the end of the book containing 5 pages.

The wounds of war can run far more than skin deep.

Grace Webb trains racehorses for a living. It’s a career she’s happy to focus on when her fiancé, Christopher Beaumont, is deployed to Afghanistan. At a time when racing yards are losing horses because of the bad economy, a promising horse like Allonby could be the salvation of her father’s yard. Grace welcomes the chance to concentrate on Allonby in an attempt to stop fretting about Christopher’s growing despondency and the frustration of lousy internet connections.

When Christopher comes home with horrific leg wounds and Post-Traumatic Stress Disorder, Grace is determined to help him heal. While she fights Christopher’s nightmares, depression and rage, she also faces a battle to save Allonby’s career before it’s had a chance to blossom.

Christopher, feeling that he’s giving Grace more grief than love, leaves her. Grace couldn’t heal Christopher, but she can help Allonby and keep her father’s yard running. When Christopher returns, seeking forgiveness and a second chance, Grace gives him that chance. This time she won’t let Christopher surrender to his demons. On the eve of the biggest race of Allonby’s career, Grace faces down her worst nightmare—saving Christopher from himself.

With thanks to my amazing beta readers: Amy Bai, Lisa Brackmann and Clovia Shaw. My long-suffering husband answered all my racing/horse questions so I won’t bean him with the rolling pin next time he comes back late from the pub.

First Time Ever I Saw Your Face
: Ewan MacColl

Grace glanced up from the hoof she was examining. “Who’s got an arse like a fry cook?”

She straightened up and looked at Harry. He had just finished putting the shark’s tooth quarter-marks on Allonby’s hindquarters and had stepped back to admire his handiwork. Considering that he had probably spent at least three hours in the pub after morning stables, he looked relatively sober. The quarter-marks were perfect and the colt’s coat gleamed like varnished oak, even in the gloom of the saddling enclosure. Grace had learned that Harry could be as pissed as a rat and still turn a horse out to a very high standard.

She smothered a yawn and wished the colt’s owner wasn’t going to be attending. She was glad that it was the General rather than one of the syndicates. He and his wife were much easier to deal with than a group of inebriated bankers or estate agents.

“He does look good, doesn’t he?” A racehorse trainer had once said that a good horse should have ‘the look of eagles’. Grace was pleased to see that Allonby had that look when he lifted his head and surveyed the activity on the lawn beyond the enclosure. His ears were pricked and he stared sharply at something that no human could see. That serene and arrogant gaze gave her goose pimples. She just
knew
she was looking at the winner of the night’s five-furlong sprint.

Grace patted Allonby’s neck and glanced at her watch. “The General should be here soon.”

The paddock quickly filled up with other horses, trainers, grooms and owners, standing in knots on the lawn. Women dressed in summer finery enjoyed the soft warmth of the July evening as they strolled across the lawn. Grace envied them their Pimms and gin and tonics as she took a sip of lukewarm water from her plastic bottle while she searched the crowd for Allonby’s owner. The jockeys were already making their way out of the weighing room and she spotted Billy Riley in the General’s gray and claret colors. Allonby’s owner, guest in tow, also strode across the grass toward her.

Grace allowed herself a relieved smile when Harry handed her the saddle, grateful that the General was one of those owners who stayed out of the saddling enclosure. She hated the owners who lingered in the box, pestering her with questions and talking as if they knew something. Grace tightened the girth and patted the colt on the rump when Harry led him toward the paddock. Allonby walked ‘like a hooker’—another pearl of wisdom. He had a loose, easy swinging stride and, although he was busy looking around, the lead rein remained relaxed and the colt’s ears twitched while he listened to Harry talking calming nonsense. Her father had put a lot of work into the horse and Grace could see why. People stopped to watch him when he ambled past, then look at their race-cards. She wondered what odds he was getting down in the betting ring.

“He looks good, Miss Webb,” Billy observed as they headed toward the owner.

“He does. If you behave yourself, we might win this one.”

The jockey laughed. “Don’t you worry. I’ll save the bad stuff for after—fancy joining me?”

“No thanks. You know me, no stamina these days. Plus, Dad’s up at York tonight so I’m in charge tomorrow.”

“You always have an excuse, Boss.”

“With good reason. Remember the last time we went out? I didn’t stop vomiting for days. You have lousy taste in restaurants, Billy.”

Grace smiled when she approached the General. He was easy to spot in a crowd, with thick white hair and an alarmingly red complexion.

“Hello, Grace.” He took her hand and kissed her cheek. “It’s lovely to see you.”

“I brought a guest, I hope you don’t mind. Mary couldn’t make it. She had a bridge tournament or something like that. Anyway, this is Christopher Beaumont. I served with his father in the army. His family and mine have been friends for years.”

Grace became aware of his companion for the first time, a tall, lanky man with short, brown tousled hair and almond-shaped eyes the color of strong tea. “It’s nice to meet you,” she murmured as he shook her hand.

“All good things, I hope.” She offered him a smile and took in the neatly pressed chinos and the blue and white striped shirt. His eyes held her, dark and rich with secrets.

My God, he’s beautiful.
How am I supposed to concentrate on a race with this distraction?

His cologne smelled of juniper and lemons and Grace felt like an idiot while she fumbled to retrieve her Assistant Trainer frame of mind. Billy stood at her elbow awaiting her instructions. She turned to him and hoped that no one saw him wink. “Keep him tucked in behind the Godolphin horse,” she told him while they walked across the paddock. “That’s the one you have to watch, but I don’t think I need to tell you that. If there’s still plenty in Allonby at two furlongs out, move him out and let him run. He’s as fit as he’s ever been.”