BOOK: Chronicles of the Overworld Book 1 — Nihal of the Land of the Wind
>>DOWNLOAD HERE >>READ ONLINE NOW
ads 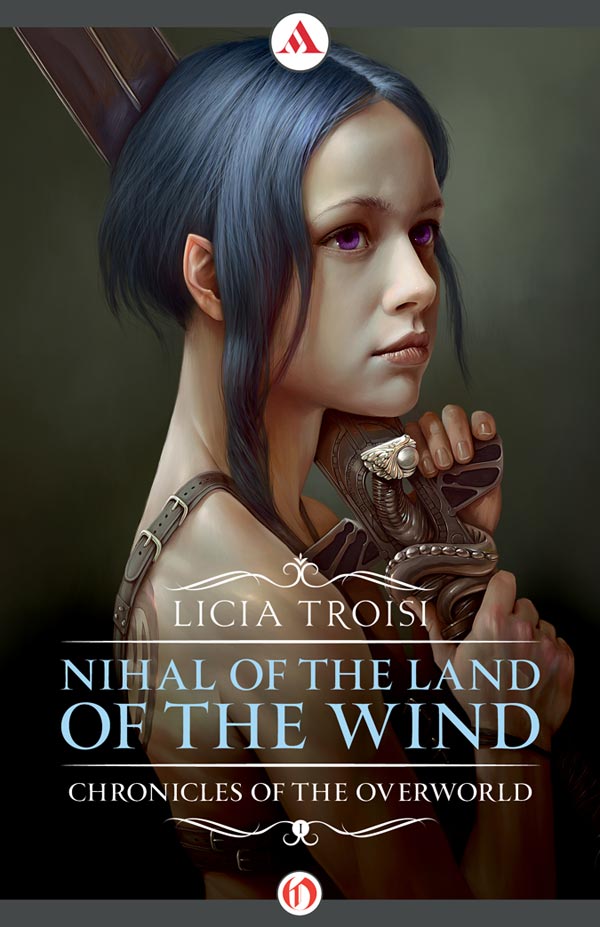 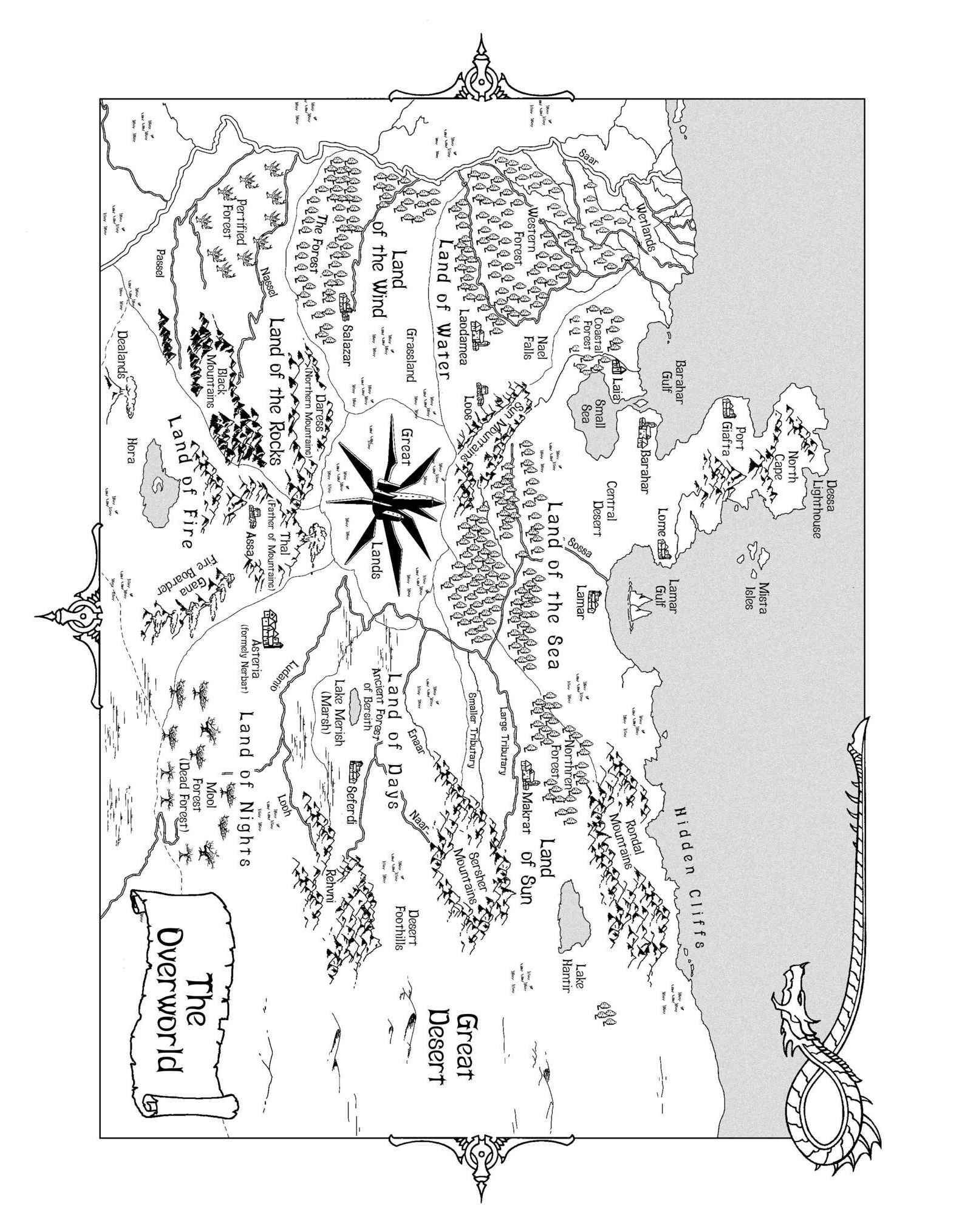 Contents
A LITTLE GIRL
1 SALAZAR
2 SENNAR
3 SOANA
4 THE GREAT FOREST
5 DREAMS, VISIONS, AND SWORDS
6 THE DRAGON KNIGHTS
7 IN THE LAND OF WATER
8 THE END OF A FAIRY TALE
FIGHT
9 THE TRUTH
10 FLIGHT
11 NIHAL’S DECISION
12 TEN WARRIORS
13 THE DRAGON KNIGHT ACADEMY
14 NIHAL THE RECRUIT
15 BATTLE AT LAST
16 A NEW SORROW
SAVING HER SOUL
17 IDO
18 THE DRAGON
19 FLYING LESSONS
20 ANOTHER BLOW
21 A NEW FAMILY
22 FAREWELL
A Little Girl

—— is the smallest and most isolated nation in the entire Overworld. It is in the west. The Great River Saar borders it on one side, while the Great Land threatens it from the other. There is no point from which it is not possible to see the soaring tower of the Fortress, the Tyrant’s dwelling place. It looms like a dark threat over the lives of all the land’s inhabitants, a reminder to one and all that there is no place beyond the Tyrant’s reach. But the kingdom is still free, at least in part.

—
Excerpt from the
Annual Report of the Council of Sorcerers

Of particular note in the Land of the Wind is the architecture of its cities with immense and elaborately organized towers. These urban structures are divided into distinct areas reserved for specific activities and are, for the most part, self-sufficient. The nucleus of each tower is comprised of a broad, roofless central area used for cultivation. The tower city of Salazar is the last outpost in the Land of the Wind before the Forest, the vast woodland along the border with the Land of Rocks. …

—
Anonymous excerpt from the lost
Library of the city of Enawar

Sunlight flooded the plain. It was a remarkably mild autumn. The bright green grass had not yet faded and the fields swayed like a calm sea around the walls of the city.

Nihal enjoyed the morning breeze from the terrace at the top of the tower. It was the highest place in all of Salazar and had the best view of the plains that flowed for miles and miles, as far as the eye could see. The city was an enormous tower with a population of fifteen thousand people crammed into its twelve hundred cubits. The fifty stories of houses, shops, and stables rose majestically from the sea of green.

Nihal liked to sit up there alone, the breeze ruffling her long hair. She would sit cross-legged with her eyes closed, her wooden sword, just like a real one, resting at her side. She felt at peace on the terrace. She could concentrate on herself, on her most secret thoughts, and on the vague melancholy she felt come over herself at times, the quiet murmurs that would rise from the depths of her soul.

But this was not one of those days. Today there was to be a battle, and Nihal stood watching the plains like a commander looking forward to the fight.

They numbered ten, all of them boys of about ten years and up, except for Nihal. They sat around her, their fierce leader: a slender girl with intense violet eyes, flowing blue hair, and large pointed ears. She didn’t look all that strong, but the other kids hung on her every word.

“Today we’re fighting to retake the abandoned houses. The Fammin have taken command down there, but they don’t know about us and they aren’t expecting us. We’ll catch them off guard and drive them away.”

“The plan?” wondered the chubbiest one.

“We’ll make our way down to the level above the shops and cut through the maintenance shafts. That will bring us straight to their hideout. We’ll come at them from the rear. It’ll be a piece of cake, so long as we don’t tip them off. I’ll take the lead, the attack squad will follow right behind”—two confident-looking boys nodded—“the archers come next. …” her eyes sought out three little kids clutching slingshots. “And then the foot soldiers. Are you ready?”

Their enthusiastic response rang through the air.

Nihal raised her sword high and jumped through the trapdoor that led from the terrace down to the rest of the tower, followed one after the next by the rest of her band.

The kids marched through the corridors of Salazar in tight formation, earning amused and—more frequently—annoyed looks from the city’s inhabitants, who were all too familiar with the epic battles waged by Nihal and her troops.

Nihal turned to face a stocky man about her height; the dwarf’s face was hidden under a thick beard. He gave her a funny bow.

Nihal brought her troops to a halt and bowed in return. “Good day to you.”

“Out hunting the enemy again, are we?”

“As usual. Today we are driving the Fammin from the Tower.”

“Ah, yes. But if I were you, I wouldn’t speak that name so easily, not the way things are these days. Not even in play.”

“We’re not afraid!” yelled one of the kids in the back.

Nihal smiled a cocky smile. “That’s right. We’re not afraid. And what is there to worry about anyway? Nobody likes the Fammin, and as far as I know the Land of the Wind is still a free country.”

The dwarf chuckled and winked at her. “If you say so, General. Luck to you.”

They marched through the tower’s many levels, holding their lines like real soldiers. They passed houses and shops as they moved through Salazar. Sunlight caught them at regular intervals as they marched by the windows overlooking the central garden. All the towers in the Land of the Wind were built around a large opening to provide light and space to grow fruits and vegetables.

Nihal turned into a side alley and opened an old, mildewed door, leading her troops into darkness.

“Here we are,” the girl said solemnly. “There’s no going back now. Our noble task requires us to dismiss all fear.”

The others nodded gravely and slid into the passageway.

It was pitch black inside. The air was thick and dense and dank. Gradually, their eyes grew used to the dark and they were able to make out the damp stairs that led downward.

“You’re sure no one’s going to be in here today? I heard something about cracks in the western wall needing to be fixed,” a boy said.

“They’ve already fixed them,” responded Nihal. “A good commander foresees this sort of thing. Enough chitchat. Let’s get a move on!”

Their steps echoed through the maintenance shaft and mingled with the sounds of voices from the other side of the wall. Then there was silence.

“Here we go,” whispered Nihal, breathing hard. It was always the same just before an attack: her heart pounded in her chest and blood pulsed through her temples. She liked the feeling of fear and excitement. She ran her fingers over the wall until she found a wooden door. Then she rested her ear against it. The big square stones were thick, but she managed to hear the voices of the kids on the other side.

“It’s always us. I’m so sick of always being a Fammin,” an enemy child complained.

“Tell me about it! Last time, Nihal left me black and blue all over.”

“She sent me home with a broken tooth,” another added.

“At least when Barod was the leader we took turns.”

“All the same, I have a lot more fun with Nihal. When we’re fighting, it feels real! I feel all charged up inside … as if we were real soldiers.”

“Well, she’s the strongest one, so she should be in charge.”

Nihal pulled her ear away from the wall and drew her weapon. Another moment’s wait and then she kicked down the door. She and her troops burst through with a yell.

The room was big and dusty. Enormous spider webs hung like curtains from the windows. It was part of a home that had been abandoned by a wealthy family, just like all the dwellings on that level. Six kids holding wooden axes were sitting on the floor. They leaped right to their feet, startled by the surprise attack. The battle began.

Nihal was a force. She threw herself at her enemies, swinging her sword violently. The fight moved them from room to room across the house, then to the exterior corridor.

The kids with the axes were definitely getting the worst of it. Cries of “Ouch!” were heard as blows met their mark.

“Retreat!” yelled the Fammin leader. The other kids ran toward the stairwell.

“After them!” yelled Nihal.

One of her troops grabbed her arm. “We can’t go down to the shops, Nihal! If my father catches me messing around down there again, I’ll really get it.”

Nihal wriggled free. “We won’t hurt anything. We’ll follow them and cut through the central fields.”

“Great. Out of the frying pan, into the fire,” the kid mumbled to himself, but he had no choice but to follow his leader.

Weapons in hand, they raced down the stairs to the shops level. Many of the shops that lined the corridor had nothing in harm’s way, but others—especially those selling fruit and vegetables—had stalls and baskets of merchandise. In the heat of the chase, the kids banged into one of the stalls and shoved some unwitting customers.

“Wretched brats!” yelled the greengrocer. “Nihal! Your father’s going to hear about this!”

But Nihal went right on chasing the fleeing Fammin. She felt alive and strong as she raced along with her sword in hand. Some of her troops had already taken captives; only the Fammin leader remained.

“Leave him to me!” she yelled to her army, and then she pushed her legs for all they were worth, racing even faster until she was hard on the heels of her adversary, who could practically feel her breathing down his neck. He threw himself into the stairwell, but fell disastrously down two levels. He stood up in pain, checked to make sure he was on the right level, and then dove out the window.

Nihal leaned out to take a look. They had come down so far that only the stables were below them now. Her prey was huddled in the middle of one of the vegetable plots in the tower’s central garden. She leaped down fearlessly, landed on her feet, and pointed her sword at her enemy. His hands were already high in the air.

“I surrender,” he said, gasping for breath.

Nihal reached his side. “Way to go, Barod! You’ve gotten a lot faster!”

“I didn’t have much choice with you right on my back like that.”

“Did you hurt yourself?”

Barod looked at his skinned knee. “I’m not as light on my feet as you are. Anyway, you can ask someone else to be the Fammin leader next time. I’m sick of it. You’re way too much.”

“You kids again! I am beyond fed up, dammit!”

“Uh-oh. It’s Baar,” Nihal said, worried. She helped Barod to his feet. Their escape route took them through a patch of lettuce heads.

“There’s no point in running off; I know who you are!”