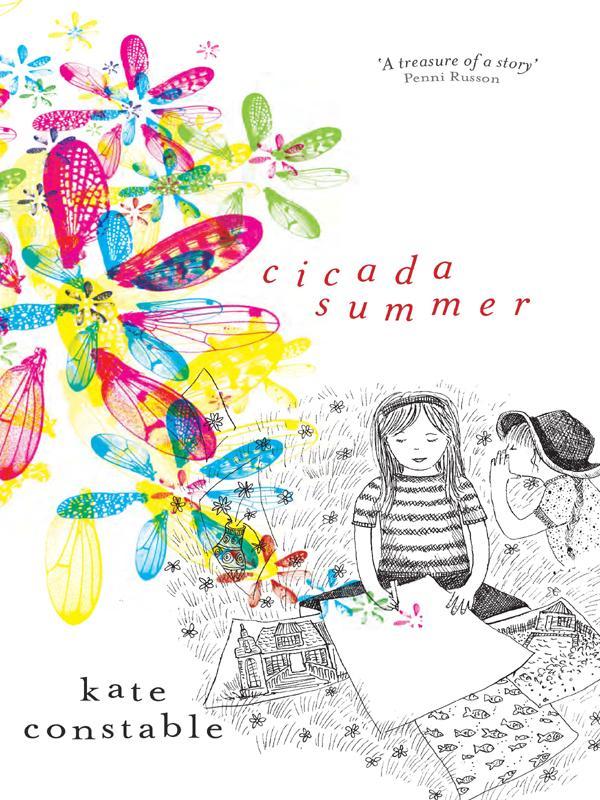 ‘Makes you believe anything is possible.
My skin prickled, my pulse raced and I couldn't
put the book down until I'd finished.’ Glenda Millard

‘A treasure of a story, a stoty to slip into your
pocket like a feather or a perfectly round stone
–for keeps.’ Penni Russon

To Jan and Bill, with love

E
loise floated on a sea of red and orange swirls. Dazzling golden threads shimmered through the cloth, the tiny fish embroidered on Mum’s favourite skirt. Mum’s arms were around her and Mum was singing softly.

She was falling asleep on Mum’s lap, safe and warm, wrapped in the billows of her skirt. The red and gold and purple of memory enfolded her and floated her away.

Eloise’s eyes sprung open, and she struggled upright. A sheet of white light flashed from the rear window of the car in front, blinding her. She shut her eyes again and watched a dark shape drift down the inside of her eyelids, then jump up again, over and over, endlessly receding but never quite fading away.

‘Can’t dream your whole life away!’ cried Dad. ‘You’re not a little girl any more. High school next year. This is a fresh start, a fresh start for both of us. You can’t move forward if you’re always looking back . . .’

Eloise gazed at the passing landscape: parched paddocks, a harsh blue sky, dead trees. She shrank from it. Inside the car it was cool, but outside it was shimmering hot.

‘Hel-lo, dreamy? Did you hear a word I said, El Dorado? Do you even know where we’re going?’

Of course she knew. They were moving to the country, to the town of Turner where Dad grew up. He was building a convention centre; or maybe it was a hotel? It was hard to keep up with all his plans. There had been so many of them in the last couple of years, and they changed so quickly.

Eloise’s grandmother Mo lived in Turner, she knew that much, though she couldn’t remember meeting her. Mo and Dad had had a big fight years ago. And then she hadn’t come to Mum’s funeral, Dad had been so angry about that.

Eloise dropped a thick black curtain down on all those thoughts and smothered them.

Dad was humming along to the radio, tapping his hands on the wheel. He broke off to glance across at Eloise. ‘Everything’s going to work out perfectly this time. We’ll settle down for good. This town’s
ripe
for a convention centre . . .’ And he was off again at top speed.

But it didn’t matter if Eloise was convinced or not. Dad would do what he wanted anyway, like he always did. Since Mum died, Dad had quit jobs, moved cities, found girlfriends and left them. Bree was the latest; she and Dad had had a big fight last week. Dad had dragged Eloise out of bed and they’d gone to a hotel. Then he’d sweet-talked away five years of not speaking to Mo, and now they were going to visit her.

Eloise watched as the road signs beside the highway counted down the kilometres to Turner: 42, 29, 17, 8. Then all at once they were there, crawling down the main street. A line of trees marched along the middle of the road, casting black bars of shadow on the tarmac. A stone soldier leaned on his gun and gazed off across hills baked yellow in the sun.

‘Still pretty,’ said Dad. ‘Even prettier once it gets a drop of rain. There’s the river, the hills, the national park. Look at the shops. How’s that for picturesque? And only—’ Dad glanced at his watch. ‘Only two hours from the city, give or take. Perfect for conferences, team-building weekends, you name it; they’ll come rolling in.’ He cocked his head toward Eloise. ‘What do you say, Ella Fitzgerald, should we go and take a look at the building site? Mo’s expecting us for lunch, but I never said it’d be an
early
lunch. And it’s not like she’s got anything to rush off to.’

Eloise was relieved. She wanted to put off meeting Mo as long as possible.

Dad swung the car off the main street and up a side road with a red-brick church at the top of a hill. ‘Besides, knowing Mo, she’ll have a million questions, and I don’t know about you, but I’m not in the mood for an interrogation. Not today, not today,’ he sang. ‘Don’t frighten me away, or I won’t want to stay; don’t ask me any questions today . . . Left at the church, then third turn on the right, if memory serves.’

Eloise counted the turn-offs as they passed. The dusty road dipped and rose between dry fields dotted with black and white cows.

‘Here it is. The human compass strikes again!’

With a triumphant flourish, Dad steered the red sports car between a pair of sagging iron gates hung with a sign: PRIVATE PROPERTY. NO TRESPASSERS.

They bumped down a rutted driveway shaded with pine trees, a murky tunnel carpeted with brown needles. A tangle of overgrown trees and bushes rose before them as the car jolted around a curve and out onto a wide gravel drive splotched with weeds.

Dad switched off the engine and there was a sudden silence. ‘There it is.’

It was a house. Eloise hadn’t known there was a
house
.

She stepped out of the car into the heat, and stared. She’d never seen a house like this before. It was made of concrete, with wide windows and rounded corners, and balconies with slim iron railings. It looked more like a small ocean liner than a house; there were even round porthole windows. The shabby once-white walls were stained with green and streaked with rust. A double set of curved steps swerved apart then swooped together to meet at the double front doors.

‘Art Deco, 1931.’ Dad pointed to a pattern of stiff sculpted zigzags and wave shapes moulded to the wall. ‘House looks like a flaming Christmas cake. But the land – the
land’s
worth a fortune.’

He snapped open his mobile phone and began to take photos of the garden. He backed away round the side of the building, holding the phone out in front of him. Eloise watched him disappear, then, slowly, she climbed the steps to the front door. Two long glass panels ran down either side of it, etched with patterns of diagonal lines and triangles that weaved over and under.

Eloise turned and gazed out over the garden. It was as big as a park, but all tangled and neglected; weeds swarmed everywhere and the trees crowded round the house as if they were trying to press their way inside. A warm wind blew through Eloise’s hair and her scalp prickled. She swung round sharply, but no one was there.

‘Hey, Elastic Band!’ Dad called from the rear of the house, and Eloise went to find him.

A paved terrace laced with dandelions ran along the back of the house; big windows and glass doors overlooked a gentle slope overgrown with yellow grass. Plywood was nailed across one smashed window. At the far end of the terrace was a covered porch, where Dad stood beside an open door.

‘Human compass, human key.’ Dad rubbed his shoulder. ‘Is there anything this man can’t do? Want to take a look inside?’

Eloise hung back. The inside of the house looked dark and creepy.

‘Come on. You’re not scared, are you?’ Dad wiggled his fingers and
woooed
like a ghost. He laughed uneasily and wiped his forehead with his arm. ‘Come on, Elementary. Chop chop. I’ll be right behind you.’

Reluctantly Eloise stepped over the threshold.

She walked into a back passageway with rooms opening off on either side. The air was cool and stale and still. The rooms were shadowy, dim and green – an underwater kind of light – and there was a pungent musty smell.

Eloise took a hasty step backward, but Dad prodded her on.

‘Not scared of a wittle mousie, are you? All old houses have mice . . . My convention centre won’t have mice, I can promise you that.’ Dad laughed suddenly and spread his arms wide. ‘I’ve always wanted to get my hands on this place! I can do anything now – I could open a damn
zoo
if I felt like it! That idiot Mitchell, flaming Bree, think I can’t
follow through
. I’ll show ’em. Everything’s going to change now, Elbow Grease, you know that, don’t you?
This
time it’s going to work out . . .’

His voice trailed away and he gazed into space, as if he could see the future unfolding before his eyes.

Eloise stepped deeper into the dimness. A ceaseless rustle of leaves, like scraps of paper tossed by the hot wind, whispered from the distant garden. A cicada started up somewhere near the porch.

At the end of the passage, Eloise pushed through a door covered in moth-eaten green felt and found herself in the grand foyer by the front door. A wide white staircase circled up to the next floor, and a round gallery looked down over the entrance hall. Eloise glimpsed big empty rooms opening out, one into another, like the chambers of a seashell. The black and white tiles and the zigzag patterns around the edges of the floor were furry with dust, and so were the stiff scalloped wave-shapes and zigzags moulded into the ceiling. Cobwebs drooped from the iron stair-railings.

As Eloise neared the front doors, the sun shifted and blazed through the glass panels, lighting the floor with a pattern of lines and angles. Eloise reached out and caught a tiny triangle of light in the palm of her hand.

Then the sun faded, and the foyer became a cave of shifting shadows. All the noises faded too – her father’s muffled footsteps, the restless wind – and Eloise stood in a pool of silence.

Pedigree Mum by Fiona Gibson
Missing Magic by Karen Whiddon
What She Saw... by Lucinda Rosenfeld
Van Gogh by Steven Naifeh
The Stone That Never Came Down by John Brunner
The Cowboy's Rules: 2 (Cowboys After Dark:) by Maggie Carpenter
The Wolf and the Lamb by Frederick Ramsay
Holiday at Magnolia Bay (Southern Born Christmas Book 1) by Tracy Solheim
Highland Enchantment (Highland Brides) by Greiman, Lois
To Desire a Highlander by Sue-Ellen Welfonder
Our partner