Read Citizen of the Galaxy Online

Citizen of the Galaxy 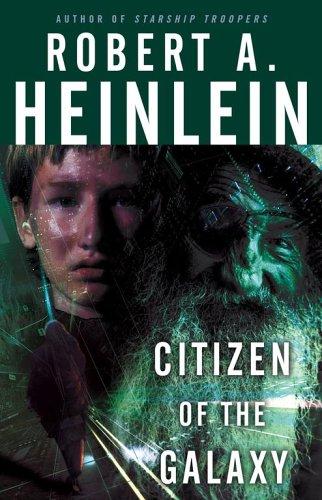 Citizen of the Galaxy

The boy was dizzy and half sick from the feel of ground underfoot The slave ship had come more than forty light-years; it carried in its holds the stink of all slave ships, a reek of crowded unwashed bodies, of fear and vomit and ancient grief. Yet in it the boy had been someone, a recognized member of a group, entitled to his meal each day, entitled to fight for his right to eat it in peace. He had even had friends.

Now he was again nothing and nobody, again about to be sold.

A lot had been knocked down on the auction block, matched blonde girls, alleged to be twins; the bidding had been brisk, the price high. The auctioneer turned with a smile of satisfaction and pointed at the boy. “Lot ninety-seven. Shove him up here.”

The boy was cuffed and prodded onto the block, stood tense while his feral eyes darted around, taking in what he had not been able to see from the pen. The slave market lies on the spaceport side of the famous Plaza of Liberty, facing the hill crowned by the still more famous Praesidium of the Sargon, capitol of the Nine Worlds. The boy did not recognize it; he did not even know what planet he was on. He looked at the crowd.

Closest to the slave block were beggars, ready to wheedle each buyer as he claimed his property. Beyond them, in a semi-circle, were seats for the rich and privileged. On each flank of this elite group waited their slaves, bearers, and bodyguards and drivers, idling near the ground cars of the rich and the palanquins and sedan chairs of the still richer. Behind the lords and ladies were commoners, idlers and curious, freedmen and pickpockets and vendors of cold drinks, an occasional commoner merchant not privileged to sit but alert for a bargain in a porter, a clerk, a mechanic, or even a house servant for his wives.

“Lot ninety-seven,” the auctioneer repeated. “A fine, healthy lad, suitable as page or tireboy. Imagine him, my lords and ladies, in the livery of your house. Look at--” His words were lost in the scream of a ship, dopplering in at the spaceport behind him.

The old beggar Baslim the Cripple twisted his half-naked body and squinted his one eye over the edge of the block. The boy did not look like a docile house servant to Baslim; he looked a hunted animal, dirty, skinny, and bruised. Under the dirt, the boy's back showed white scar streaks, endorsements of former owners' opinions.

The boy's eyes and the shape of his ears caused Baslim to guess that he might be of unmutated Earth ancestry, but not much could be certain save that he was small, scared, male, and still defiant The boy caught the beggar staring at him and glared back.

The din died out and a wealthy dandy seated in front waved a kerchief lazily at the auctioneer. “Don't waste our time, you rascal. Show us something like that last lot.”

“Please, noble sir. I must dispose of the lots in catalog order.”

“Then get on with it! Or cuff that starved varmint aside and show us merchandise.”

“You are kind, my lord.” The auctioneer raised his voice. “I have been asked to be quick and I am sure my noble employer would agree. Let me be frank. This beautiful lad is young; his new owner must invest instruction in him. Therefore--” The boy hardly listened. He knew only a smattering of this language and what was said did not matter anyhow. He looked over the veiled ladies and elegant men, wondering which one would be his new problem.

“--a low starting price and a quick turnover. A bargain! Do I hear twenty stellars?”

The silence grew awkward. A lady, sleek and expensive from sandaled feet to lace-veiled face, leaned toward the dandy, whispered and giggled. He frowned, took out a dagger and pretended to groom his nails. “I said to get on with it,” he growled.

The auctioneer sighed. “I beg you to remember, gentlefolk, that I must answer to my patron. But we'll start still lower. Ten stellars--yes, I said. 'Ten.' Fantastic!”

He looked amazed. “Am I growing deaf? Did someone lift a finger and I fail to see it? Consider, I beg you. Here you have a fresh young lad like a clean sheet of paper; you can draw any design you like. At this unbelievably low price you can afford to make a mute of him, or alter him as your fancy pleases.”

“I'm bored. What makes you think that sorry item is worth anything? Your son, perhaps?”

The auctioneer forced a smile. “I would be proud if he were. I wish I were permitted to tell you this lad's ancestry--”

“Which means you don't know.”

“Though my lips must be sealed, I can point out the shape of his skull, the perfectly rounded curve of his ears.” The auctioneer nipped the boy's ear, pulled it.

The boy twisted and bit his hand. The crowd laughed.

The man snatched his hand away. “A spirited lad. Nothing a taste of leather won't cure. Good stock, look at his ears. The best in the Galaxy, some say.”

The auctioneer had overlooked something; the young dandy was from Syndon IV. He removed his helmet, uncovering typical Syndonian ears, long, hairy, and pointed. He leaned forward and his ears twitched. “Who is your noble protector?”

The old beggar Baslim scooted near the corner of the block, ready to duck. The boy tensed and looked around, aware of trouble without understanding why. The auctioneer went white--no one sneered at Syndonians face to face . . . not more than once. “My lord,” he gasped, “you misunderstood me.”

“Repeat that crack about 'ears' and 'the best stock.' “

Police were in sight but not close. The auctioneer wet his lips. “Be gracious, gentle lord. My children would starve. I quoted a common saying--not my opinion. I was trying to hasten a bid for this chattel . . . as you yourself urged.”

The silence was broken by a female voice saying, “Oh, let him go, Dwarol. It's not his fault how the slave's ears are shaped; he has to sell him.”

The Syndonian breathed heavily. “Sell him, then!”

The auctioneer took a breath. “Yes, my lord.” He pulled himself together and went on, “I beg my lords' and ladies' pardons for wasting time on a minor lot. I now ask for any bid at all.”

He waited, said nervously, “I hear no bid, I see no bid. No bid once . . . if you do not bid, I am required to return this lot to stock and consult my patron before continuing. No bid twice. There are many beautiful items to be offered; it would be a shame not to show them. No bid three--”

“There's your bid,” the Syndonian said.

“Eh?” The old beggar was holding up two fingers. The auctioneer stared. “Are you offering a bid?”

“Yes,” croaked the old man, “if the lords and ladies permit.”

The auctioneer glanced at the seated circle. Someone in the crowd shouted, “Why not? Money is money.”

The Syndonian nodded; the auctioneer said quickly, “You offer two stellars for this boy?”

The auctioneer lacked at him; the beggar jerked his head aside. The auctioneer shouted, “Get out! I'll teach you to make fun of your betters!”

The Syndonian said, “Your words were 'any bid at all.' Sell him the boy.”

“My lord, I cannot sell on one bid. The law is clear; one bid is not an auction. Nor even two unless the auctioneer has set a minimum. With no minimum, I am not allowed to sell with less than three bids. Noble sir, this law was given to protect the owner, not my unhappy self.”

Someone shouted, “That's the law!”

The Syndonian frowned. “Then declare the bid.”

“Whatever pleases my lords and ladies.” He faced the crowd. “For lot ninety-seven: I heard a bid of two minims. Who'll make it four?”

“Five!” a voice called out.

The Syndonian motioned the beggar to him. Baslim moved on hands and one knee, with the stump of the other leg dragging and was hampered by his alms bowl. The auctioneer started droning, “Going at five minims once . . . five minims twice . . .”

“Six!” snapped the Syndonian, glanced into the beggar's bowl, reached in his purse and threw him a handful of change.

“I'm bid seven. You, over there, with your thumb tip. You make it eight?”

The auctioneer glared but put the bid. The price was approaching one stellar, too expensive a joke for most of the crowd. The lords and ladies neither wanted the worthless slave nor wished to queer the Syndonian's jest.

“Softly,” cautioned the Syndonian. “The bill of sale.”

Restraining himself, the auctioneer filled in price and new owner on a form already prepared for lot ninety-seven. Baslim paid over nine minims--then had to be subsidized again by the Syndonian, as the stamp tax was more than the selling price. The boy stood quietly by. He knew that he had been sold again and he was getting it through his head that the old man was his new master--not that it mattered; he wanted neither of them. While all were busy with the tax, he made a break.

Without appearing to look the old beggar made a long arm, snagged an ankle, pulled him back. Then Baslim heaved himself erect, placed an arm across the boy's shoulders and used him for a crutch. The boy felt a bony hand clutch his elbow in a strong grip and relaxed himself to the inevitable--another time; they always got careless if you waited.

Supported, the beggar bowed with great dignity. “My lord,” he said huskily, “I and my servant thank you.”