Read City in the Clouds Online

City in the Clouds 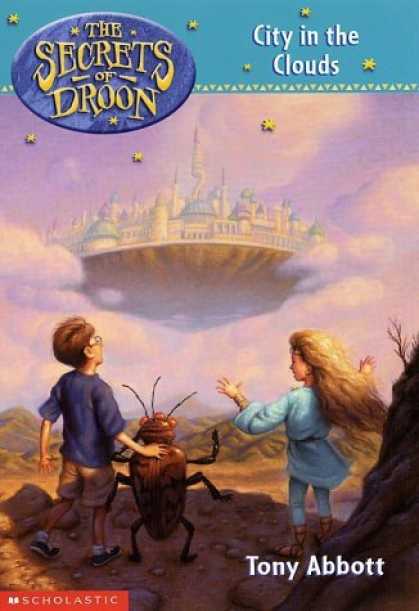 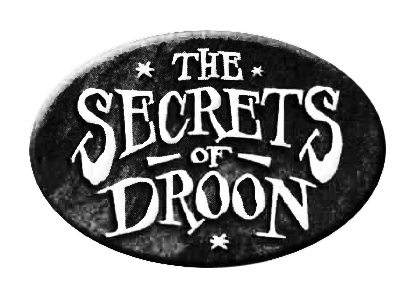 City in the
Clouds

To Debbie O’Hara
with love

3.
The Flying City of Ro

5.
The Guardians of Droon 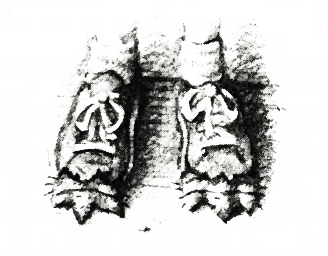 School was over for the day.

Eric Hinkle and his two best friends, Neal and Julie, climbed onto the bus home.

“It’s been two whole weeks since we’ve been to you-know-where,” Julie whispered as they squeezed into a seat together.

Eric smiled. Of course he knew where.

Droon, the totally secret and magical world of adventure that they had found under his basement.

“It’s so strange,” Eric said when the bus started up. “We have all these amazing new friends and we can’t even talk about them.”

That was true. Since their first adventure in Droon, they had met Galen Longbeard, an old and powerful wizard, and his spidery helper, Max. Khan, king of the pillow-shaped purple Lumpies, had helped them, too.

But their special friend was Princess Keeah, a junior wizard who was trying to keep the wicked Lord Sparr and his red-faced Ninns from taking over her world.

“And I’m just itching!” Neal groaned, bending over suddenly to scratch his legs. “In fact; I’ve been doing weird stuff all day. Not to mention the tiny little voices I keep hearing…”

That’s when it happened.

“Whoa!” Eric gasped, looking under the seat. “Look at that!” He pointed at Neal’s sneaker.

Neal bent down. His shoelaces stretched and broke, one after another. The toe burst open and something brown and shiny popped out.

“Neal,” said Julie, “what’s with your sneaker? Is that the stuffing coming out?”

Eric gasped. “No, that’s his foot coming out!” 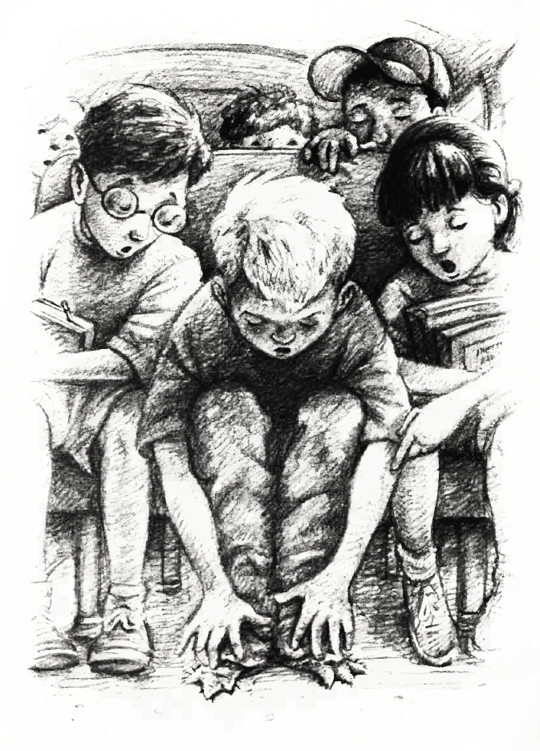 The other kids on the bus turned and laughed.

Julie dropped her backpack over Neal’s shoe before anyone saw it.

“What?” Neal moaned. “I thought that spell was over!”

“It looks like it just came back,” said Julie.

On their last adventure in Droon, a magic spell had gone wrong and accidently Neal had been turned into a bug.

A baby bug, with a hard brown shell, six legs, and feelers on his head that curled and twitched.

And now it was happening again.

Errr!
The bus stopped, and the doors swung open.

“There’s only one place to go,” Eric said, grabbing Neal and pulling him off the bus. “To my basement. Hurry. We need to go back to Droon.”

Together, they ran across the yard to Eric’s house.

“The spell’s not finished somehow,” Julie said, frowning. “But don’t worry, Neal. Droon is the most magical place ever. We’ll find the cure.”

“This is not going to last forever,” Eric added.

They hurried to the side door and opened it. Eric put his finger to his lips.

“Nobody can see you like this, Neal.” He paused to listen.

Eric listened to the clacking of a computer keyboard. “My mom’s working,” Then he called out. “Mom, I’m home. Neal and Julie are with me. We’re going downstairs! Bye!”

They rushed through the kitchen.

On the way Neal wiped some crumbs off the table, then licked his palm. “Sorry,” he said. “Crumbs suddenly seem tasty to me.”

Eric was worried. “I don’t like this,” he said. “Nothing magical has ever happened outside my basement… until now.”

“Let’s think about that after Neal’s cured,”‘ said Julie. She shut the door behind them. They hustled downstairs.

Usually a dream would call the kids to Droon.

Or the soccer ball in Eric’s basement would turn into a globe of Droon. Princess

Keeah had put a charm on it.

But the magic soccer ball was lying as usual on the workbench. It was just a ball.

“No dreams,” Neal said. “Unless you count the one where I thought a lizard would eat me.”

They went to a door under the basement stairs.

Eric quickly opened the door and turned on the light. Everyone piled into a small room. He closed the door behind them.

Neal held up his right hand. His fingers had started to form a claw. “I don’t know

Julie flicked off the light.

Whoosh!
The floor vanished instantly and the magic stairs appeared. Without wasting another moment, Eric darted down the steps.

Each time he and his friends had gone to Droon, the stairs had taken them somewhere

different. He wondered where the stairs would lead this time.

Rrrr.
A rumbling sound came from the clouds.

Suddenly, the clouds parted. A round silver shape passed slowly under the bottom

“Whoa! It’s some kind of huge flying thing,” Julie said. The rainbow-colored stairs began to ripple under them.

“As usual, the stairway is fading too soon,” Eric said. “We’d better jump.” Then he gripped his friends’ hands firmly.

Plink! Plonk! Plunk!
They landed on the ship.

“There’s a hatch over there!” Julie shouted.

Freezing wind blew over them as they crawled across the silver surface to a small door.

Neal leaned over. He gripped a corner of the hatch with his clawed hand and twisted.

Krrnch!
The little door sprang open to reveal a metal ladder running down inside the ship.

One by one, the three friends went down into the strange flying ship. 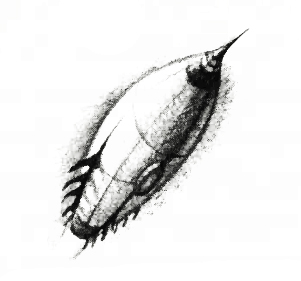 Eric reached up, grabbed the twisted hatch, and pulled it down over them.

“Okay, we’re on a flying ship. But whose flying ship? And where is it going?”

They looked around. They were in a narrow corridor. The walls were made of the same shiny metal as the outside of the ship.

“My bug senses are returning,” said Neal. Then he pointed ahead of them.

“I hear voices this way. But I can’t tell who.”

Carefully, they crept along the corridor.

Neal’s bug foot clomped on the floor. Eric followed behind.

They rounded a corner in the narrow hall.

Hanging on the wall ahead of them was a row of shiny black armor, glinting in the light.

“That’s Ninn armor!” Eric said. “There are Ninns on board! Maybe even Lord Sparr!”

The ship rumbled noisily around them. It seemed to be changing direction.

The three friends quietly inched their way to a large metal door with a wheel on it.

“A Ninn-sized hatch,” Eric whispered. “Here goes nothing.” He turned the wheel and opened the hatch slightly.

They peered into a large circular cabin filled with Ninn warriors. The Ninns were working the giant ship’s controls.

One Ninn stepped over to a red chair. The kids couldn’t see who was in the chair.

“King Zello and his daughter are heading for the city of Ro, my lord,” the Ninn grunted. “What shall we do?”

“Set course for the valley!” snarled a familiar voice.

“Soon we shall have the magic diamonds — millions of them,” the Ninn grunted happily.

“The diamonds will be useful,” Sparr said. “But what I really seek in the city of Ro is a single word…”

Eric frowned.
A word? What word?

The pink clouds thinned as the giant ship began to slip down through them. The cabin windshield showed a world of white mountains. Here and there were slithering silver rivers. A broad, flat valley directly ahead was circled by forests of violet and blue trees.

A Death in the Family by Caroline Dunford
Erasing Memory by Scott Thornley
Vile Blood by Max Wilde
The Greatest Lover Ever by Christina Brooke
The Devil of Nanking by Mo Hayder
TheOneandOnly by Tori Carson
Slave Empire - Prophecy by T C Southwell
HeartsAflameCollectionV by Melissa F. Hart
The Highwayman: A Longmire Story by Craig Johnson
Seducing the Enemy's Daughter by Jules Bennett
Our partner